How To Make Your Mixes Warm & Gritty Using Distortion FX

If you've not been using distortion to give your mixes a bit more bite, get the guitars growling or even adding warmth to the vocals then perhaps you've been missing a trick. Joe Albano shows how.

In the heyday of the analog era distortion was a fact of life, from the subtle saturation of tape, to the gentle edge of slightly driven tubes and transistors. At every stage of production a little was added by the equipment itself, imparting a warm, rich quality that pretty much defined the sound of music recordings. When the digital era was ushered in, the cleaner signal paths lacked that gentle warmth, and engineers/producers sought to get it back by deliberately adding small amounts of distortion during recording and mixing, in a quest for that classic warm, “analog” sound. Distortion—in its many forms—has become a staple of the mixing process, and new digital distortions can provide another, more aggressive edge. Here’s a brief look at some of the types and applications for distortion in mixing.

Nowadays when most people want to get a little classic analog warmth for their mixes they usually turn first to the subtle character of slightly driven tubes and transistors. Even though tubes can be very clean when run within their limits, it’s common to push levels through tube devices hard enough to generate a little very subtle extra harmonic distortion. While too much of this will eventually sound like obvious distortion, a very lsmall amount will blend in with the harmonics in the audio signals themselves, providing extra presence and what’s come to be described as “analog warmth”. Many years ago transistors replaced tubes as the standard components in audio hardware, but they’re also capable of adding a little edge when driven hard—a slightly different quality, but one that can also be perceived as desirable analog warmth.

Nowadays there are two ways to bring this analog tube/transistor character into a mix. One approach would be to use actual hardware—vintage consoles/processors, modern reissues of classic gear, and modern units that are designed to provide that distinct analog character are widely employed in studios that have a sufficient budget for the hardware. Often these are employed as a front-end recording chain, imparting a little analog character to audio as it’s being recorded. The advantage of an analog front-end is that even smaller studios can afford a few pieces that can be used repeatedly while overdubbing one track at a time.

Typical front-end components might include vintage/tube mics, a classic preamp, and possibly an EQ and compressor. Famous vintage units like the tube-based Pultec EQP-1A EQ and Teletronix LA-2A optical compressor are renowned for their subtle analog character—some engineers even run signals through the Pultec flat just for the quality imparted by its signal path. Transistor units like the Urei 1176 FET compressor can impart not only more aggressive compression but a slightly edgy quality from the FET transistors used. Many classic console processors are also available, such as the revered Neve 1073 mic preamp & EQ and the SSL E- and G-series EQs.

An often overlooked source for analog warmth is the transformer, commonly used in older gear. Transformers tend to saturate, providing their own subtle but distinctive edge. Transformers contribute to the warmth of tube devices like the Pultec EQs, and they are a major component of the analog character of some console processors like the Neve 1073.

Whatever the source of the distortion, when running a signal through an analog front-end the key is to let the hardware add its character without being obvious. If you push levels too hard you can end up with less warmth and more of an edgy sheen that might prove too much down the road in the mix, especially when many such tracks are combined.

A hardware analog front-end is not the only option for the modern studio—the sound of analog can be emulated in software as well. Component modeling analyzes the circuit path of analog hardware and duplicates the subtle distortion and saturation generated, making it possible to provide that sound via plug-ins—this has make the sound of analog available at any price point, to any studio large or small.

Probably close to half the plug-ins out there these days are modeled emulations of analog gear—virtual versions of the classics (Pultec, LA-2A, 1176, Fairchild, 1073, etc) abound, with some even included with the DAW. Higher-end third-party modeled analog processors are available from companies like UA and Waves, along with many, many others. 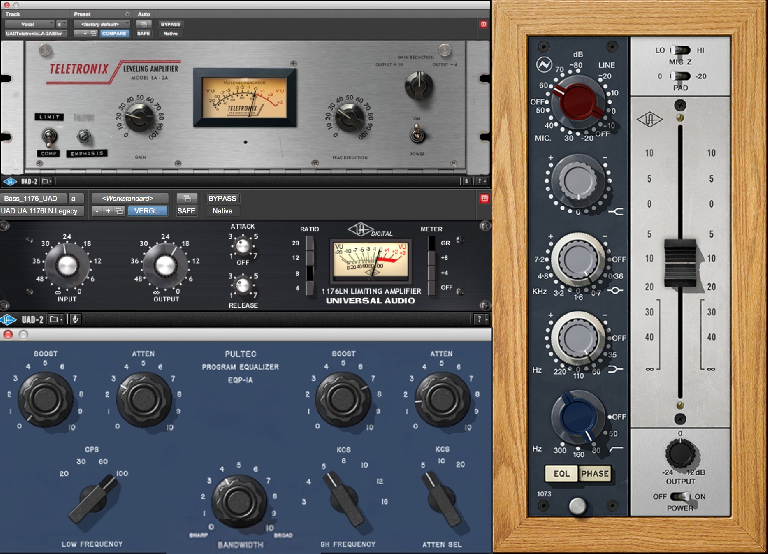 One caveat about working with virtual analog plug-ins would be to watch the signal levels that are run through them. The 32-bit resolution of DAWs allows for massive headroom, which has resulted in many virtual mixers getting in the habit of ignoring overload warning lights; but some modeled analog plug-ins will only sound the way they’re meant to if levels are kept within the limits that would be imposed in the analog world—sloppy gain-staging could result in not getting the best sound out of those processors.

Besides circuit distortions, the other source of subtle classic analog warmth was tape. Recording tape saturates when signals are recorded “hot”—at higher levels. Saturation is a combination of slight compression and subtle overload/distortion—it’s a distinctive kind of analog warmth, one that was present on virtually every track of every recording in the pre-digital pre-DAW analog tape era.

For a long time after digital/HD recording took over, engineers still often recorded initially to tape to get that classic sound before dumping the audio into the DAW for easier editing. This was especially popular for recording drums, which can benefit greatly from the tape saturation for a nice fat drum character. Nowadays the increasing cost and diminishing availability of analog tape—not to mention the logistics of keeping tape machines up & running—has all but put an end to the use of real tape. At first virtual modeled emulations of the tape saturation effect weren’t really able to capture that distinctive quality, but current tape emulations are up to the task. Besides inserting the effect on specific channels, a classic application is to insert a tape saturation effect at the top of the effect chain on every track in a mix, mimicking the accumulated effect of recording on a multitrack tape recorder—Pro Tools even features an optional built-in effect called Heat, which provides this on every channel of the mix.

Tape saturation can also be added at the stereo mix bus. Many mixers like to bounce down two versions—one clean, and one to analog tape (or through simulated analog tape)—to see which sounds best. Sometimes the tape version will have a little extra welcome warmth and fullness, while other times the clean version will maintain better clarity, but whichever is preferred it’s another way to potentially add a little something to the mix at the final stage.

Of course, subtle distortion/saturation for analog warmth is not the only application for distortion in a mix. Deliberate use of obvious, aggressive distortion has been a major part of pop music for years, primarily in the form of overdriven/distorted guitar amps. There, once again, the sound of tubes rules, whether real or virtual. Preamp tubes (12AX7) provide buzzier distortion, while poweramp tubes provide crunch. Different types of poweramp tubes provide distinctly different distortion character, from the midrangy crunch of British EL34 and EL84 tubes to the grind of American 6V6 and 6L6 tubes. Virtual amp sims (simulations) often give the user the choice of different amps and tubes which can be dialed up for a clean/direct guitar track, making it easier than ever to match the distortion sound to a particular instrument and mix.

Transistors are also widely used for heavy distortion, again in both hardware and software. The sound of overdriven transistors is more edgy than tubes, but equally useful. Just as with tubes, different types of transistors have their own distinct sound—older Germanium transistors can offer up a fat “fuzz” sound, while modern silicon transistors and op-amps can provide a harsher buzz.

But heavier distortion is not just for guitars. Some aggressive tube crunch can at times make a typical analog synth patch really jump out, and a bit of fuzz can add an aggressive edge to a real or synth bass part, when musically appropriate. I’ve even added (band-limited) distortion to the vocal, to enhance an aggressive performance, like a particular section of a vocal track—usually I prefer to do this in parallel, mixing in the distorted vocal with the original, to maintain optimal intelligibility.

While analog-style harmonic distortion is what most people think of when they think of distortion, digital signal processing provides the option for different, harsher types of distortion. Digital distortion plug-ins are often referred to as Lo-Fi or Bit-Crusher effects. While harsh digital clipping can be used for a very edgy version of traditional analog overdrive, other methods for generating digital distortion can offer more interesting distortion effects.

Reducing the bit-resolution will create a fuzzy sheen, before degenerating into a nasty spitting sound—it’s not the kind of effect you might choose to use often but it can be a cool special effect, especially for sound design applications. Lowering the Sample Rate will create high-frequency “Alias” tones—when used on drums or percussion this can create an edgy, ringy pitched percussion effect. While digital distortion might not be appropriate for all situations, it can at times provide a whole other palette of sounds to pump up a mix or for use in sound design.

Many tracks in a mix can benefit from distortion, whether subtle or obvious, tube or tape, analog or digital. Getting familiar with the subtle analog warmth that various processors can deliver can help to use them more effectively, and with more obvious distortion applications a little experimentation inbetween projects can provide some good ideas, which can then be pressed into service when the time arises.