This month, we’ll dig into some real world examples of how to make distorted guitars sound big using plug in amp modelers and a very little effects. While I’ve touched on this before, I wanted to get specific with some production techniques.

To begin with, amp modelers are great to have and most of them can be dialed in to deliver some mean tones. I tend to turn to specific modelers for specific jobs, in order to let those do what they do best (well, to my ears).

For example, for the heaviest distortions, I like the Universal Audio ENGL E765 RT (Retro Tube), which models the original 100-watt EL-34 power section. It can output hi-gain guitar parts, while still retaining a nice creamy tone. 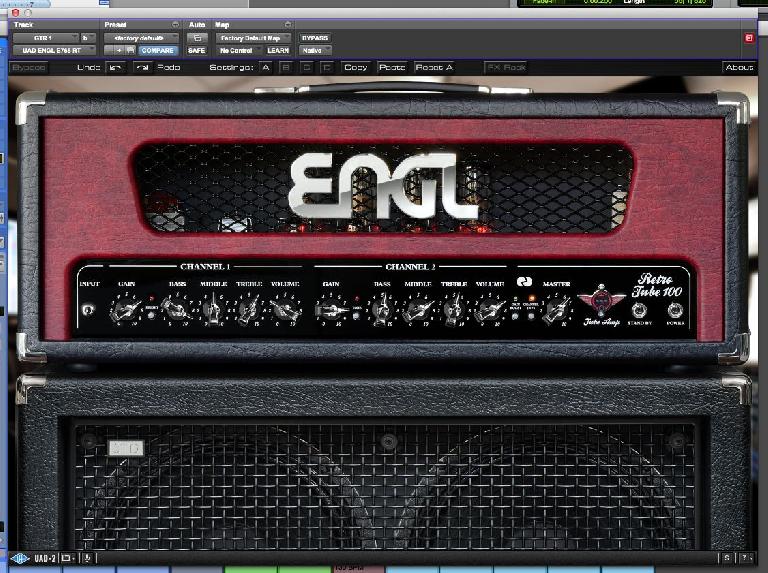 For even more gain, I turn to the ENGL E646VS (Victor Smolski) model, which kicks the distortion up to another level. That’s for the serious hi-gain parts that need a crispy, in-your-face saturation.

Since these amp plugins are mono, I tend to pan them hard to one side to get started. But that’s only half the guitar picture. What I like to do is record the part that I just played again, so that there is a true double. This is different than a stereo guitar output, which is a mono in guitar, but feeding a stereo output path. That’s not true stereo; it’s the exact same part on each side. By playing the part again, you get all the inexact differences that when done properly, make for a much bigger guitar sound.

When doubling my guitar part, I will pan the one I’m playing to the total opposite side of the first part. This lets my ears hear full stereo and pick up on the live nuances of what I’m recording.

The next thing I tend to do with the new stereo tracked guitar part is use a different kind of amp than the first one. By doing that, I feel I get a wider tone stack happening which again makes for a bigger overall sound. For example, on semi-aggressive guitar tracks, I like to use the Universal Audio Marshall Plexi Super Lead or Silver Jubilee on one side, when using the heavy ENGL on the other. I let the ENGL ‘lead’ the way in volume (on one side), while the Marshall sits slightly tucked in on the other side. 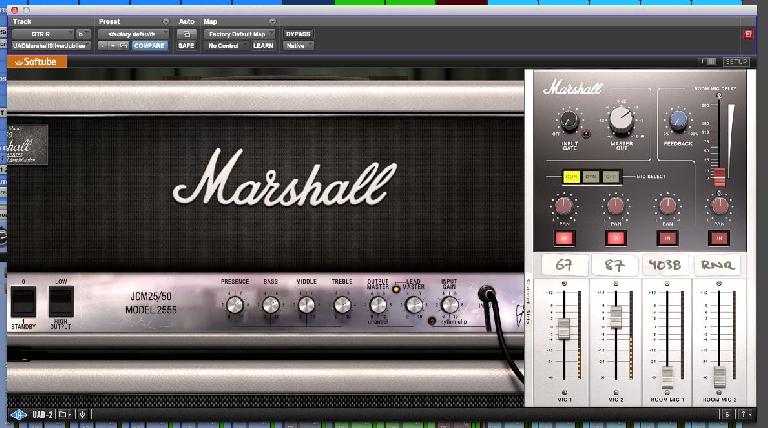 What I will do is get the ENGL amp sounding good on the first part, then open up the Marshall on the second track and fill out the sound. On the Silver Jubilee model, you can play with the Input Gain to get more or less saturation. When you do turn it up past 6, it can get kind of thick and creamy. But usually, I want it a bit on the crisp side, so I will turn the Input Gain down around 4, which is crunchy but still edgy with a lot of crisp top.

Whether or not to add reverb to saturated guitar parts depends on many things, from the type of production to the kinds of reverb you have on hand. When it comes to reverb on heavy tracks, I go light if any at all. I always remember talking to the great engineer Tony Platt who recorded AC/DC's Back In Black, and he noted that there is little to no reverb on those tracks. (He coincidentally voiced the microphone placements on the above-mentioned Marshall amps). Keeping reverb to a minimum gives you an in the face, up front guitar sound that really cuts through the tracks.

Add it at the Cuts

One thing I like to do to add a touch of depth to dry heavy guitar parts is automate a reverb to turn on at the end of a phrase or the final notes of the song. This lets me keep the track dry and in your face for the entire song, except for parts where I want that verb to come out.

This can, of course, be done in any DAW, and since I use Pro Tools, I simply assign a reverb to an AUX channel, and use a Bus send. I’ll call up that reverb on the channel and either write or draw the automation to turn the bus up at the hits. By doing this, you get as much or as little tail as you want when the guitars hit those last notes. 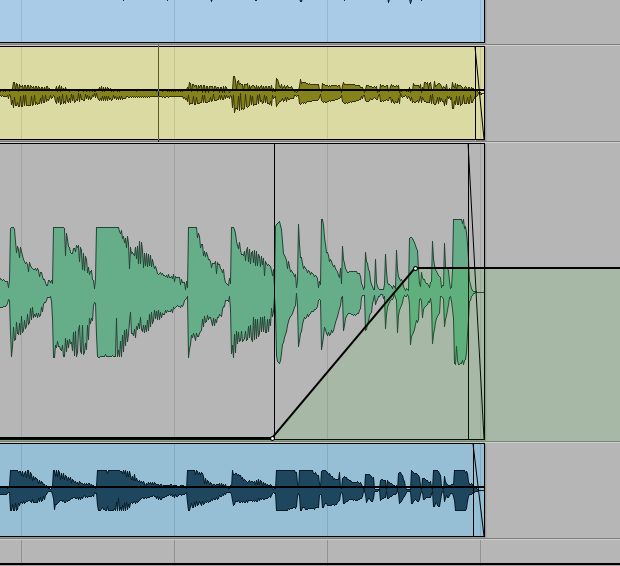 I find this most effective when there are no cymbals bleeding over the cuts, and you’re just hearing the guitar.

To go for that big guitar sound with amp simulator plug ins, try recording your part twice, creating an authentic double track. Then change up the type of amps to get a nice variety of tone. Experiment with keeping them almost dry, which brings the guitars forward creating more presence in the mix. Then add a touch of reverb only when you can hear it, to create some depth. Most of all have fun doing it!

Learn more in Rich Tozzoli's Producing and Mixing Guitars in The Ask.Audio Academy.