How to Make a Relaxing, Evolving Backdrop in Reason

Language
It's the weekend and it's time to relax. G. W. Childs shows how to create an evolving, ambient background sonic landscape in Propellerhead Reason's Thor.

Let's face it, all of us could use a little relaxation, these days! But, before you go out to purchase any 'relaxation audio' in the form of looping audio apps that play back relaxing environments, why not try building a few relaxing landscapes of your own. In this tutorial, I'd like to show you how to make a relaxing, evolving and beautiful backdrop of sound, right here, in Reason.

A lot of people naturally assume that you would start with actual, sampled, environmental sounds. And yes, this is a great way to do this, as well. But, you'd be surprised to learn that a lot of what you think is real environmental sometimes actually is synthesis, which is what we're going to be doing here. I'll go ahead and create a Thor synthesizer from the Create Menu, and then once it appears, I'll right-click Thor, itself and choose 'Reset Device'. 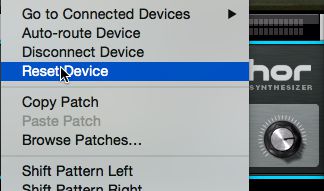 First, let's start off with a basic background to get things going. And, nothing sounds more natural than a bit of white, pink, or grey noise. To do this, I'll create a Noise oscillator, as my first oscillator. 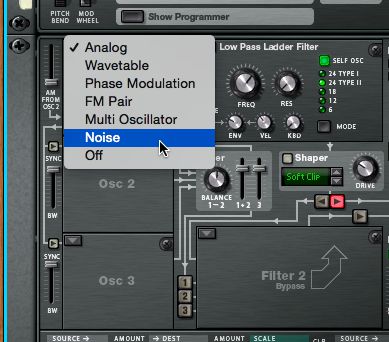 Once I have my noise oscillator in place, I'll set it to Static, and then set the Oscillator 1 Noise Modifier to 55. Static, you'll notice as you press a key, has a very similar sound to rain. A very relaxing start! Now, on the default, first Filter, which is set to Low Pass, I'll lower the Cutoff knob down to 1.56 kHz. If you press a key, you'll notice that this takes away a lot of the high frequency out of the static/rain we've created, which is great, because it will free up those higher frequency for other sounds, we'll be adding soon enough. I'll also lower the Filter 1 Envelope Amount, to avoid any unforeseen modulation from keyboard input. 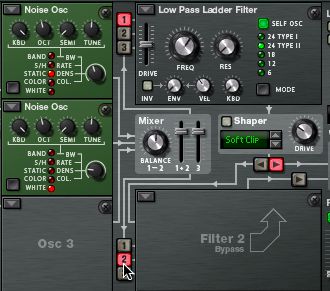 For the second oscillator, we'll keep it on White Noise, as this particular timbre of noise works wonderful for ambient sounds. But, we will want to set up the second filter, as it's currently not doing anything, literally! I'll set the second filter to the State Variable Filter, and set it's mode to Bandpass. Now, I'll adjust the Cutoff down to 636 Hz, but raise the Resonance up to a whopping 118. By having the higher resonance, we'll get a nice whistle in the wind we're about to make. I'll also lower the Filter 2 Envelope amount, again, so MIDI input does not mess with my filter settings. I have other plans there! Finally, turn Self OSC Off!

Now, let's jump into the Thor Step Sequencer to make this patch where it will play itself, leaving us to meditate. To do this, I'll put the Step Sequencer in Repeat Mode, then lower the Sequencer Step Count to 8.

I'll also adjust the Gate Length for each step so that each step plays for as long as possible! We really need this to sustain! I'll also lower the Sequencer Rate down to 1/4. Keeping it slow will really help the gentle environment we're trying to build.

Now, once we raise the Amp Envelope's Sustain slider, all the way up, we can push the Run button on the Sequencer, and hear our first fruits in environment creation.

Now to modulate everything and even add in some ambience. First, let's add in one more Oscillator. This time, we're not going to use noise, however. Let's add in a Wavetable Oscillator, and adjust it down one octave to 3. And, while you're at it, set its Output to 3. 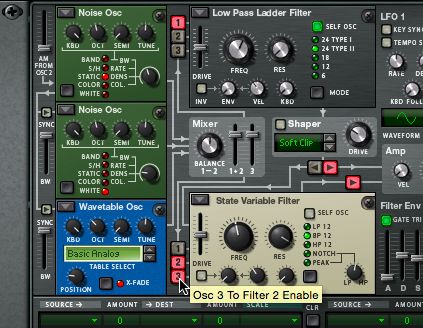 Next, we'll set the Table Select to PPG1 Dual VCF. This particular timbre sounds very similar to wind chimes, or pan flutes. Perfect for that escape in to the Astral. Let's also set its position to 84. 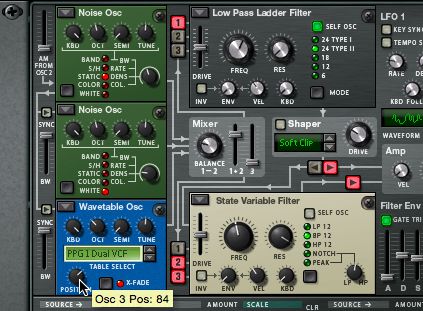 Now, before the ringing drives you crazy, let's get a little modulation in to make the bells come and go, instead of sticking around all the time. Also, let's make that wind blow! Thankfully, the Modulation Matrix can do more than one thing at once. On a multi-destination slot, I'll set the Source as LFO 1, and the Destinations as Filter 2 Frequency (Set to Value of 66), and the OSC position (set to Value of 46). By modulating the position of both, things will sound much more organic, and fluid, and... Well, real.

?Of course, the rate of the LFO isn't quite right, let's drop that down to .27 Hz. We want this to move slowly and sound like a real windy afternoon, right? We'll also set the Waveform to a random Sine Wave, this will keep things from being repetitive. 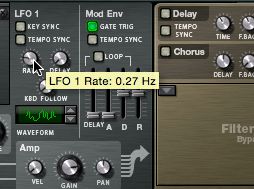 Now, we'll need one more Modulation Matrix line to make the bell come and go. I'll set LFO 2 as a source, and then set Osc 3 Level, for the Mixer, to 91.

Alright, getting close! Now, let's lower the input 3 slider within the Mixer to that the Wavetable oscillator starts from a 0 volume. This means that now the modulation from the Modulation Matrix will raise this slider, invisibly for us, making our bells randomly come and go with the random sine wave. I'd also suggest moving the Mixer Balance over towards Channel 1, at a setting of around 26, which will bring our rain in more. 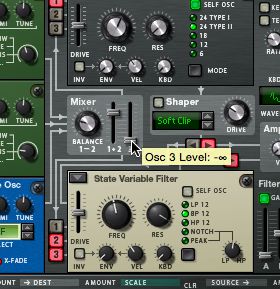 Okay, almost there! I'll set the LFO 2 waveshape to another random sine, as well. Then, set the Rate to .36 Hz. This slow, constant source of modulation will be a great method of moving our bells in and out of audible range.

Alright, you should be hearing a very, dry, static heavy rainy day that sounds something like this.

Let's put on the finishing touches! I'll turn on Thor's Delay, and set the Delay time to 693 and the Feedback to 46. Normally, this would be a mess of a setting. But, since we need to make the environment sound bigger and more ambient, the outrageous settings will do a wonderful job of blurring things and simulating a real environment.

Doesn't sound too far off a real, rainy, street corner, or house, huh? And, that's only one Thor patch! Oh, and if you really want to make it authentic, try adding on an RV7000 in Arena mode, like this! 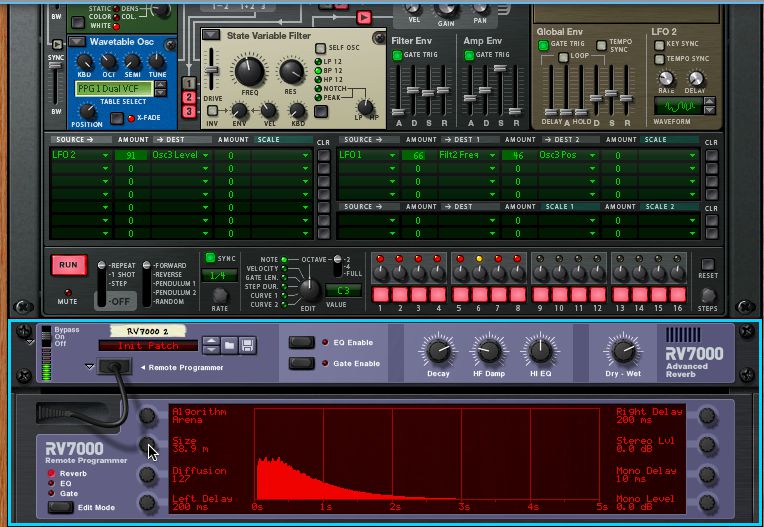 So, as you can see, Reason is great for making fun, ambient and realistic environments for games, movies, or just sitting in a garden. Take this example and see what else you can come up with!

SebAudio
Thank you ! For a more "outer world" FX I've changed OSC3 wave with "16th harmonics" and add FM modulation on it.