Language
Logic X's Drummer is excellent at creating realistic drum patterns using the supplied kits. However, Bill Burgess shows how to take it to the next level and use it with any instrument!

By any stretch, the Drummer Instrument in Logic X is an interesting breakthrough in Software Instruments. It generates reasonably convincing, albeit quite ordinary drum patterns and fills, synced to your track automatically. Magic! But, for many of us, Drummer is just a bit too close to GarageBand, and just a bit too far from music making. The story ends there. Or does it? Logic still has a few hidden backdoors and workarounds. It's one of the reasons I still find it interesting. In this tutorial I am going to show you how to hack Logic's Drummer, spank it around some, and use it with any software instrument. 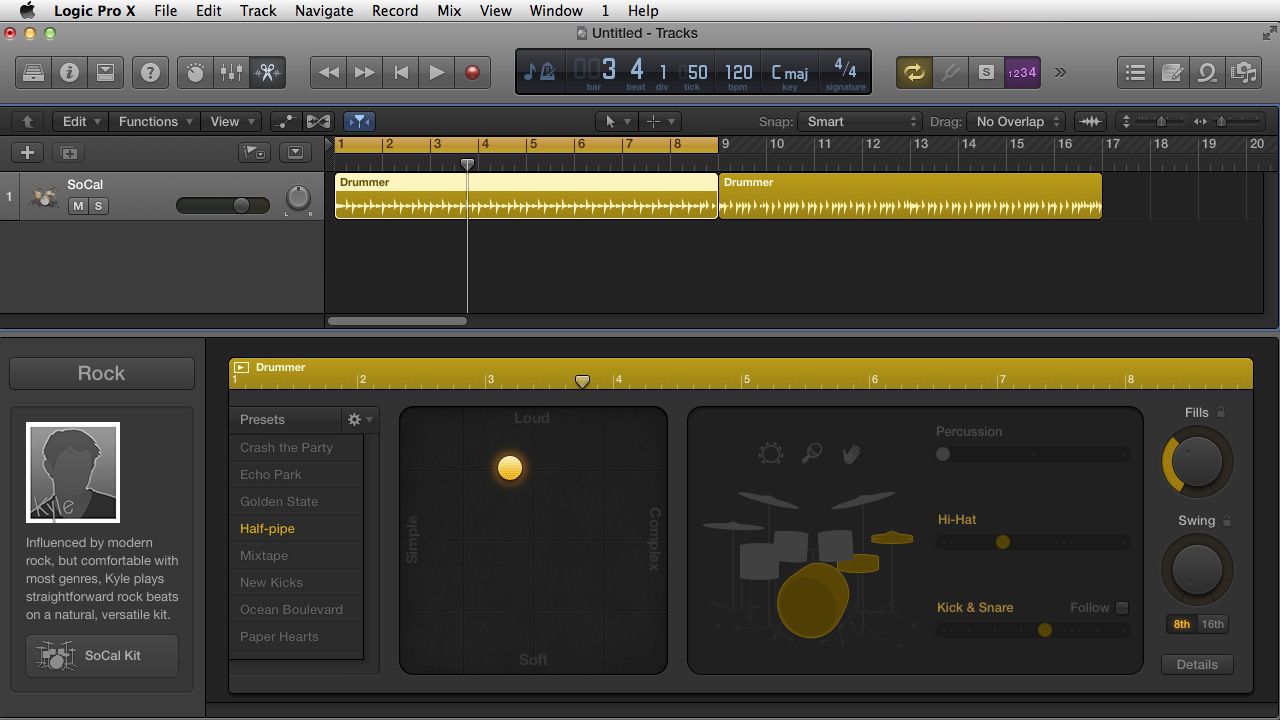 Add a Drummer track to a new Logic session. Drummer defaults to Rock, with Kyle playing a SoCal drum kit, using the Half-Pipe preset. This is a perfect drum track! Perfectly and amazingly boring that is… Let's take Kyle out back and rough him up a bit. 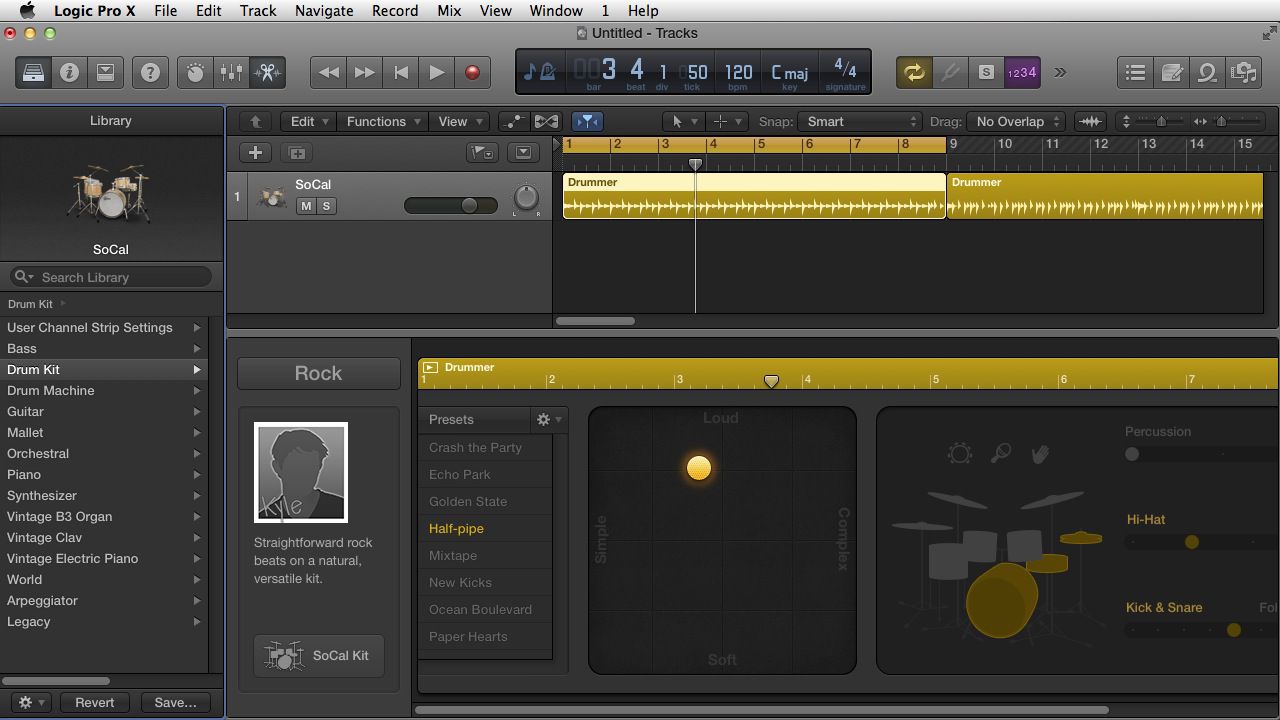 Go to the upper left of the app and select the Library Drawer icon. It's directly under the Apple icon. Now you will see the Library with Drum Kit selected in light grey. These selections are Logic's installed Channel Strips. 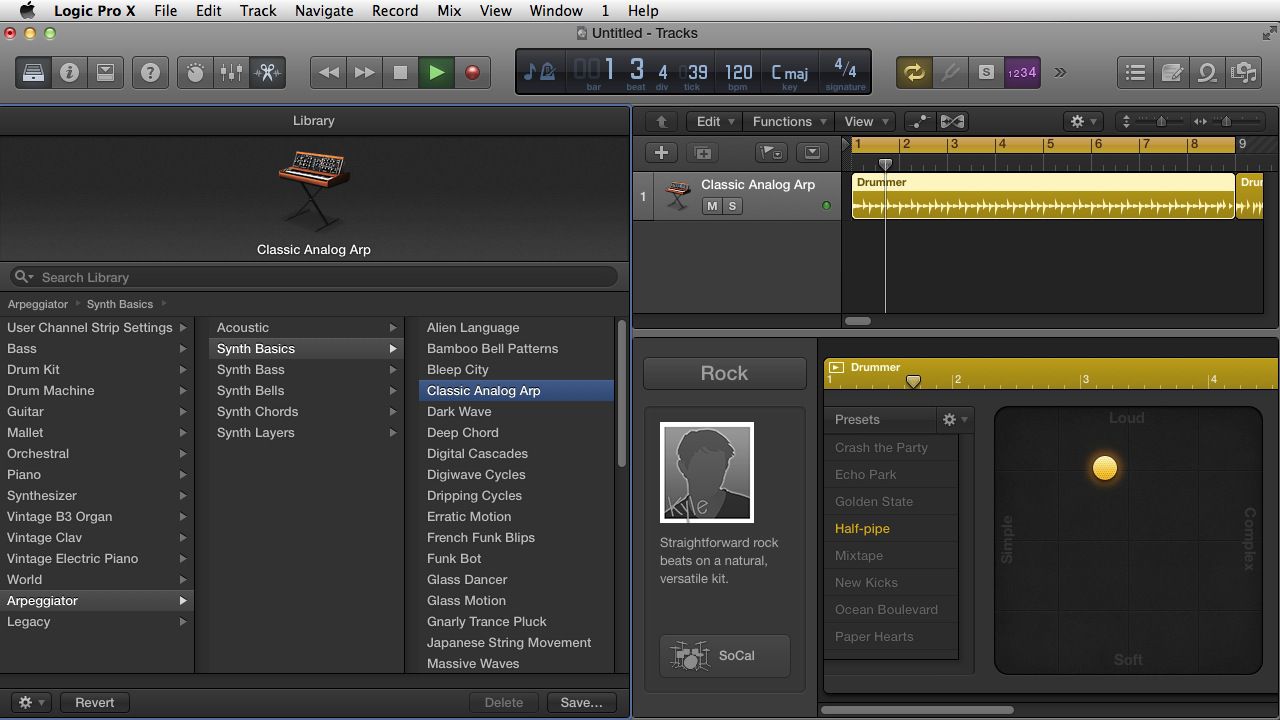 A pretty bitchin' bassline is now being played. You have just hacked Drummer, and told Kyle to play bass. 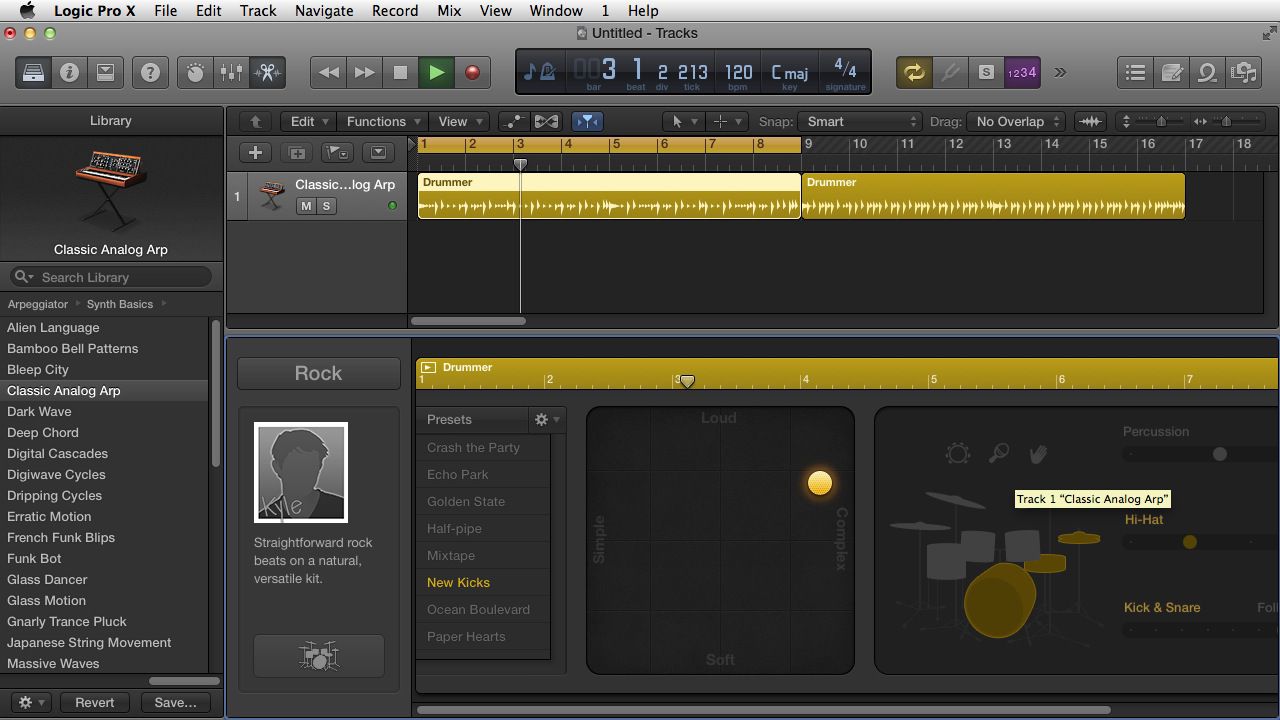 Now let's order Kyle around a bit. I changed the Preset to New Kicks and upped the complexity and dynamics on the X Y Pad to taste. Use the Marquee Tool to create some cuts. Every cut will generate pattern changes and minor fills in the bass line just to the left of the cut.

The Catch? If you try and change styles (from Rock to R & B) or players (from Kyle to Logan) within Drummer, Logic defaults back to Drum Kit and the hack is lost.

Step 5 - Lock a Drummer performance by Converting to MIDI 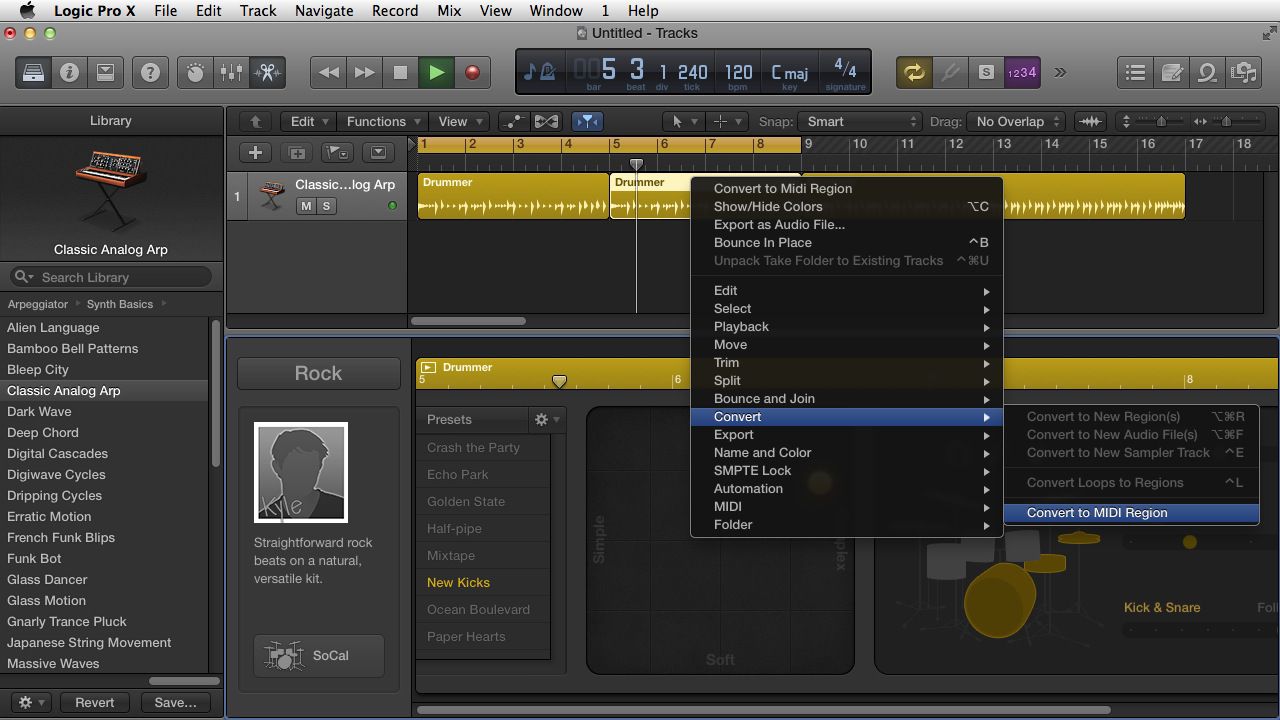 Since Drummer will change its generated performance patterns based upon additional region cuts and parameter changes, we need to learn how to preserve the bass parts we like and prevent it from doing so. It's easy. Select the region you want to preserve, right click and select Convert > Convert to MIDI Region. The Region is now green and has an associated Piano Roll Editor with it. It is now a locked performance within a dynamic (or unlocked) Drummer Track.

Step 6 - Use Drummer to Control any Third-Party Instrument 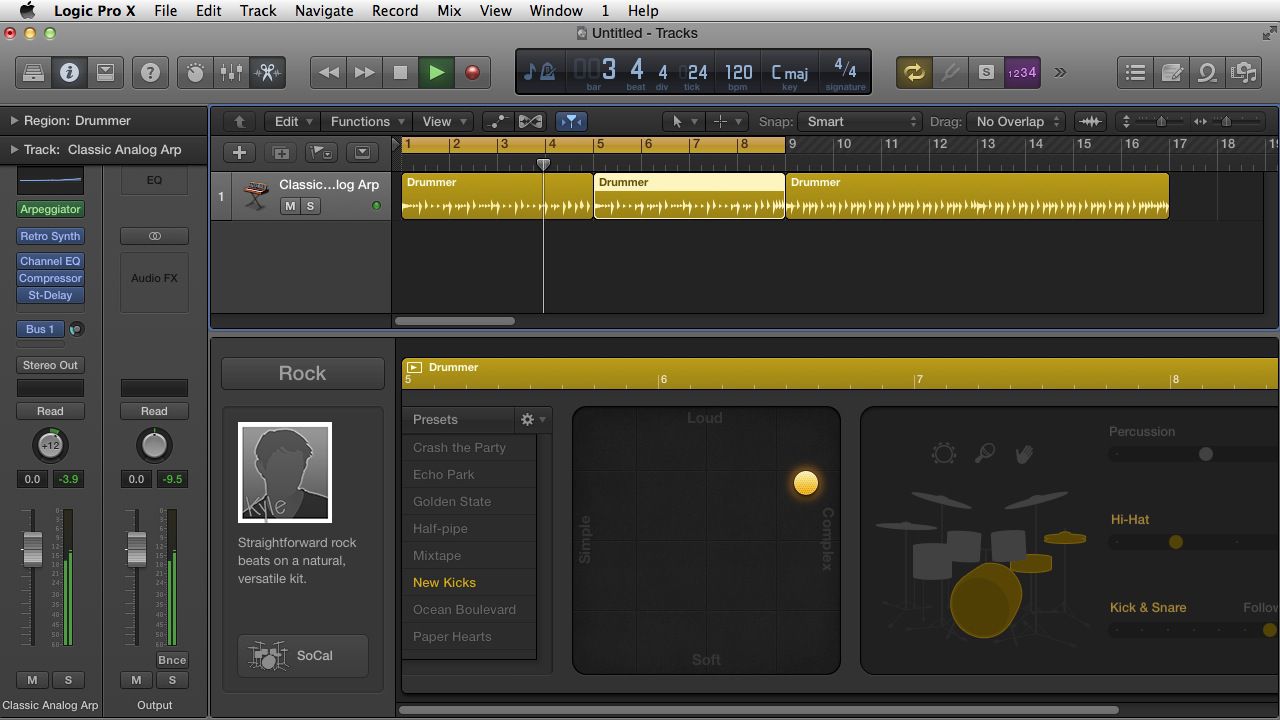 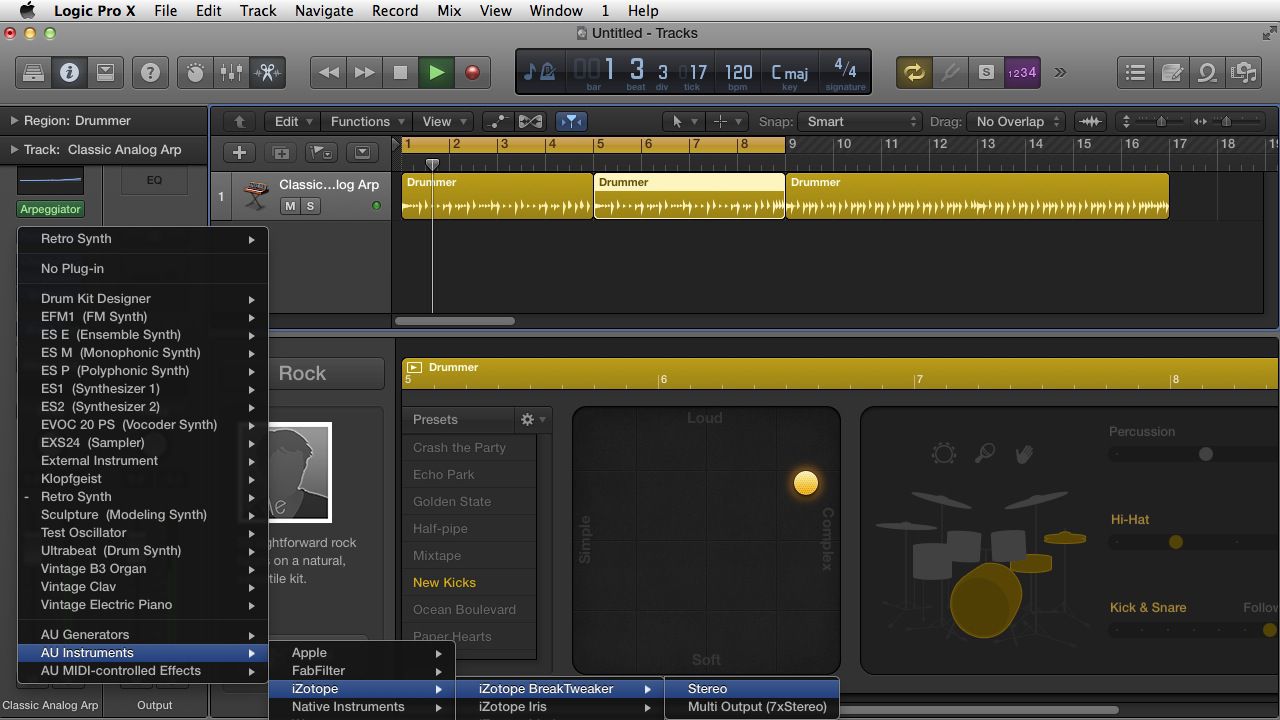 Select Retro Synth, scroll down to AU Instruments and make a selection. I'm going to use iZotopes BreakTweaker. Boom. Now Kyle the Drummer is listening. He does what we want. He plays the sounds we want! 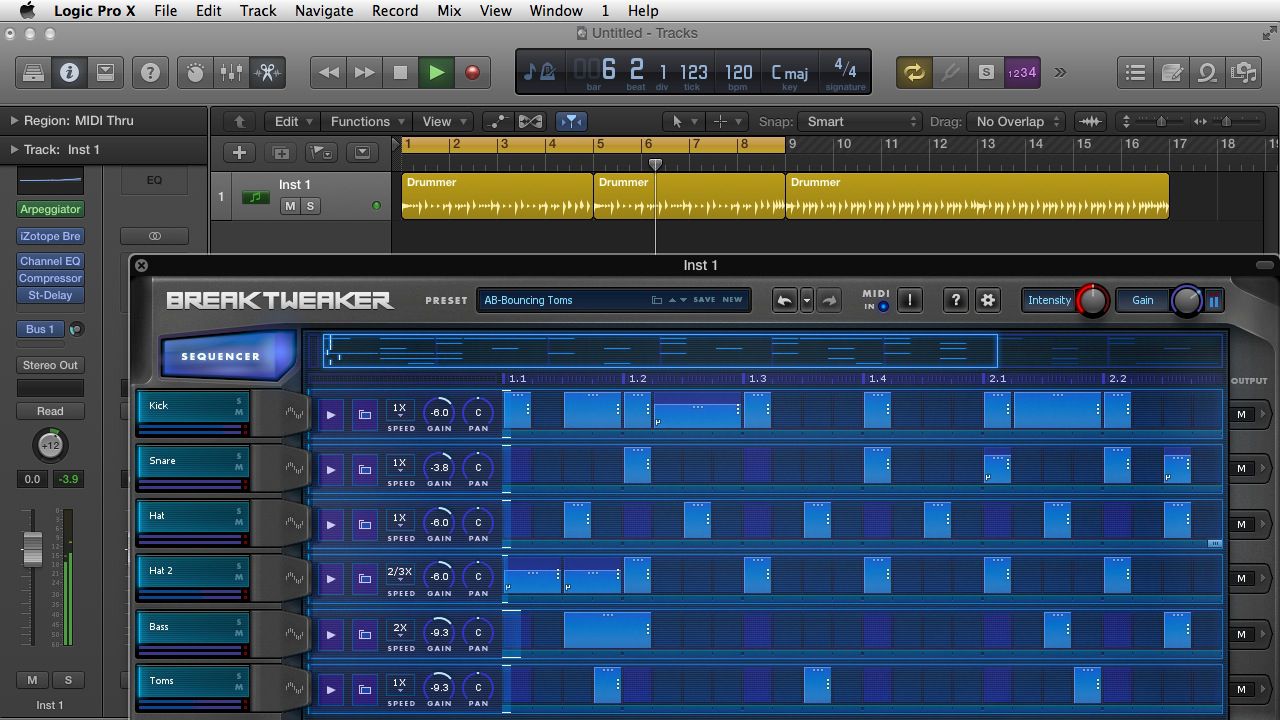 Remember, your third-party instrument selection will now be playing through the previous instruments (Retro Synth) Channel Strip plug-ins. That's why you are hearing a Stereo Delay effect. Sometimes this is a happy surprise. If so, enjoy it and have the courage to leave it alone. If not, adjust the new instruments Channel Strip plug-ins to taste and you are ready to go. More hacks like this one can be found in my new Logic Pro X 401 Xtreme Drums & Beats MPV course.