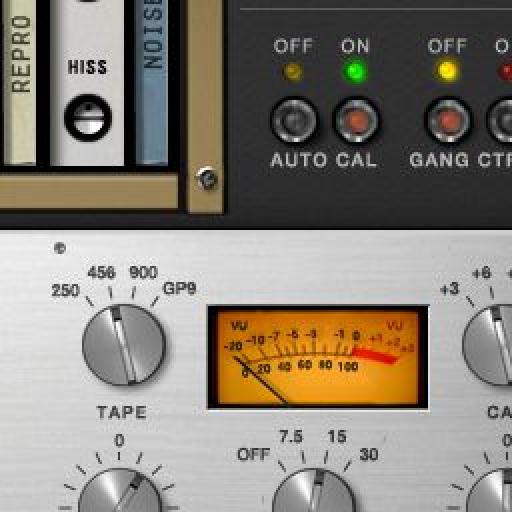 How to Get That Analog Tape Sound Using UAudio's Studer A800

Language
You want a warm, punchy sound, right? We all like that analog tape sound in this digital world. That's why Rich Tozzoli has turned to Universal Audio's Studer A800 for that extra punchy sound!

Ah, the good old sound of analog tape. Many adjectives have been used to describe its character – warm, punchy, fat, airy, thick and so on. But those are rarely used to describe the sound of our favorite DAW's (Digital Audio Workstations). So one way to get them to work together is to use a plug in such as the Universal Audio Studer A800 Multichannel Tape Recorder. This is especially useful for getting drums and loops to punch through a mix – something we will explore here with 5 easy tips.

Universal Audio recommends using the Studer A800 as the first insert on your chosen channel(s) – so it's best to bypass any other plug-ins you have and begin there. You can use it in a variety of ways: individual drum tracks, groups, or on a stereo or Master bus. 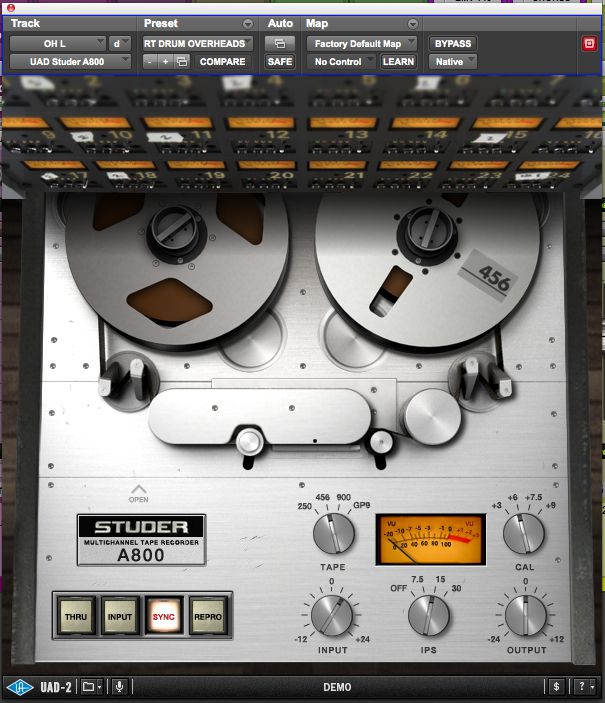 Punch up the Input

One of the great things about recording drums on analog tape is you can get that classic pleasing 'saturation'. By turning up the Input knob, it drives the signal going to the tape circuitry. Lower levels will have a cleaner sound, but higher levels will result in more distortion and saturation. Note that the Output knob has no control other than adjusting the gain at the output of the plug in.

I tend to use the A800 plug-in on drum overheads to get some great thickness and analog color. But it also sounds good driving the Input when using the A800 on drum loops. Either way, try hitting that Input for some added sonic character.

Another important control on the A800 is the IPS knob, or Inches Per Second. This controls the speed of the tape transport, as well as its 'head bump' – a fancy word for bass frequency build up. 30 IPS is the cleanest and most pristine of the three with its relatively flat EQ response. 15 IPS is a favorite for rock and R&B, where you'll notice a slight increase in bass response and high frequency roll-off. To darken things up even more, try 7.5 IPS.

My favorite setting on drums is 15 IPS, because you'll hear it tame and crunchy sizzle in the cymbals, and punch up a bit of the kick drum.

By clicking on the Studer Badge, a secondary panel of controls opens. If you select Sync or Repro on the Primary Path Select (Thru/Input/Sync/Repro), the Sync and Repro EQs become active. These filters can shape the HF (high frequency) and LF (low frequency) EQ. 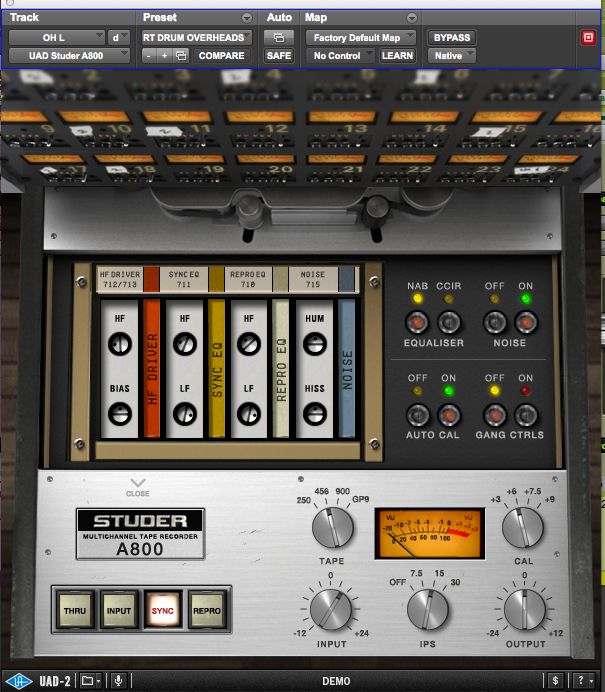 For example, if you are using the A800 on overheads, and the cymbals are too bright, select Sync on the Primary Path Select. Then turn the Sync HF EQ down (counterclockwise). You'll hear the high sizzle reduce – like using EQ. On the contrary, if you want to make the sound brighter, turn the HF EQ up. It's a powerful set of filter/EQ tools that can help bring out the detail in drums.

If you do choose to place it across multiple drum tracks and you want to make a global change to all instances at once – it's easy. Simply click on the Studer badge to open up the secondary controls (as mentioned in the tip above). Then select the Gang Controls button and turn it ON. A red LED will flash letting you know its active.

Now any A800 plug in that you have Gang Controls active on will respond to changes made to any of them! Easy. To make individual changes (not to all of them), simply turn Gang Controls OFF, and make your adjustment. To put it back in the Gang, put the controls back ON (the red light will flash). Now you're good to go.