How to Emulate Logic Pro’s Take Folders in GarageBand

One Logic feature that’s only partially implemented in GarageBand is Logic’s ability to easily create Comps. Yet there is a work around. Check it out!

GarageBand includes many of Logic’s features, sounds, and tools, but of course not everything in Logic is implemented in this free entry-level DAW. One Logic feature that’s only partially implemented in GarageBand is Logic’s ability to easily create Comps—Comping in GarageBand is much more rudimentary. However, it is possible to partially—if not fully—emulate Logic’s more capable Comping feature. Heres how to do it.. 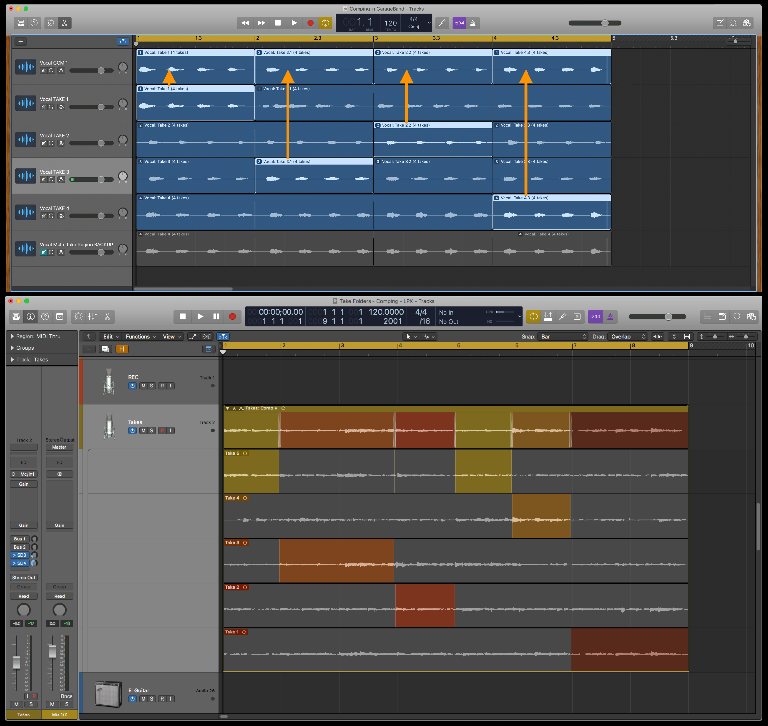 First off, a little background.. “Comp” is short for Composite. It’s common practice to make several recordings of a performance—like, say, a vocal part. No single performance is ever perfect, and even if technical perfection is not the goal, for a recording you’d want at least a level of musical perfection that will stand up to repeated listening. Singers or instrumentalists will often deliver a performance that’s good in many parts, but has some flaws in others; by recording several versions of the same part, the engineer/producer can choose the best sections from the various versions, and cut and paste those sections into a single, finished performance that sounds better than any individual version. The individual performances are called Takes, and the finished version is a Composite, or “Comp”, for short—the process of auditioning the individual Takes and combining the best sections from different Takes into one finished Comp track is Comping.

Most DAWs have a specific editing mode dedicated to quickly and easily creating Comps, and Logic is no exception. In Logic, you record over the same section repeatedly—usually while looping in Cycle mode—and when the appropriate Preferences are enabled, each pass will be saved as a separate Take. Logic can then display all the Takes as sub-tracks attached to a single track (a feature called a Take Folder), which will serve as the Comp track. With all the Takes visible, it’s easy to audition then with localized Solo buttons that play only one Take at a time (without affecting playback of the rest of the arrangement)—with no Takes soloed, Logic plays the top Comp track. With audio Takes, all you have to do is Swipe over a section of a Take to copy it to the final Comp track, making it even faster and easier than having to select, copy, and paste each bit (Note—it works a little differently with MIDI Takes—you do have to Copy & Paste—but the Comping process is still basically the same). 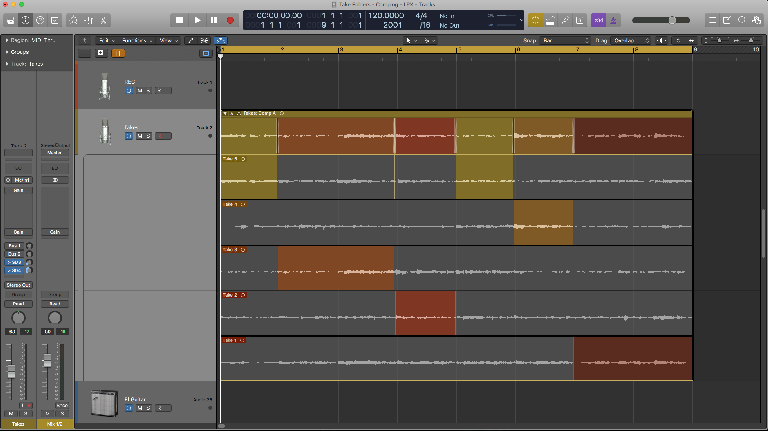 GarageBand offers a simplified version of this. To create multiple Takes, once again you’d loop a section of the song defined by the Cycle ruler while recording, and each pass will be saved as a separate Take. Note—this works for Audio tracks, but you have to specifically enable it in GB Preferences for it to also work with MIDI/Software Instrument tracks. 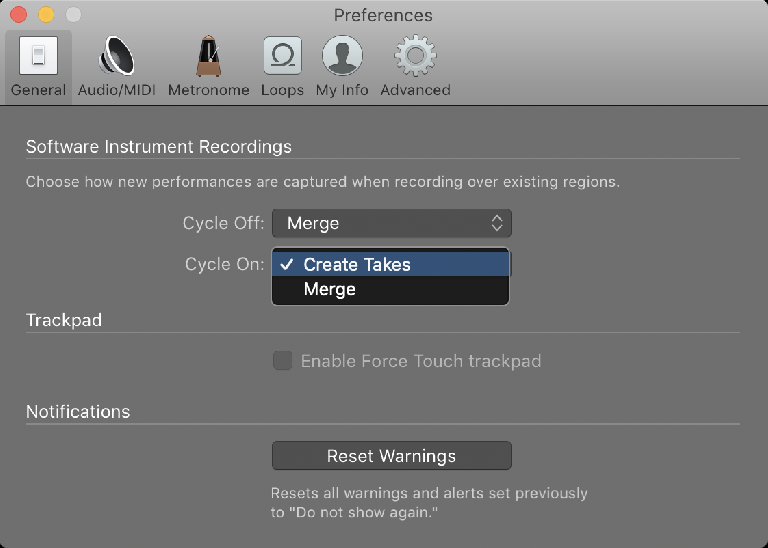 The Takes are combined into a single multi-Take Region in a single track—a small number at the upper left corner of the Region is a popup menu that lets you choose and audition the different Takes.

But unlike Logic, there’s no dedicated Take Folder display that shows all the Takes at once. To create a Comp you’d select one Take at a time, and enter cuts (with Command-T) at the places you want to switch from one Take to another. Then, with the multi-Take Region divided up into several smaller multi-Take Regions, you simply select the Take you want to use for each section.

This method works fine, but it doesn’t lend itself to experimentation with different versions of the Comp, or making changes to the Comp track after it’s first edited. For example, let’s say you cut a multi-Take Region of a vocal recording at a particular spot, dividing it into two multi-Take Regions, and then choose Take 1 for the first Region and Take 2 for the second; then you decide the first Region (Take 1) should run a bar longer before Take 2 comes in, so you Trim the Regions’ end/start points to move the transition point. But while Trimming a regular audio Region would reveal the unused part of the audio recording, trimming a multi-Take Region doesn’t, so you’d either have to undo all the previous edits or be stuck with the Comp as is.

With Logic, since you’d have all the separate Takes showing at the same time via its Take Folder display, it’d be easy to go back and audition the original Takes after an initial Comp is made, and make changes to the Comp in progress, changing the sections of each Take that are used in the Comp. The GarageBand method doesn’t really allow for this—at least not as it’s presented in the documentation.

Now, you could make a copy of original multi-Take Region before you begin editing/Comping it, and stash it on an extra (Muted) track—that way you could always get back part of a Take that you’d cut out. But you still wouldn’t have the convenience of seeing and going back & forth between all the full Takes. But it is possible to at least partially emulate Logic’s more convenient Take Folder approach to comping.

You can manually set up GarageBand to both display all the Takes of a multi-Take Region in different lanes, and allow for changes to be made to an initial version of a Comp. Here’s what you’d have to do:

1. Record audio or MIDI in Cycle mode to create a multiple-Take Region. This will result in a single track with the multi-Take Region, as described above.

4. The last duplicate track will serve as a backup for the original multi-Take Region, just in case. Once you’ve copied the multi-Take Region to that track, Mute it, and forget about it unless you run into a problem Comping that you can’t Undo.

5. Using the small Take selector menu, select a different Take in each multi-Take Region on each (duplicate) Take track.

6. Solo the Take tracks to audition the different Takes—Option-click on each solo button to isolate just that individual Take track. 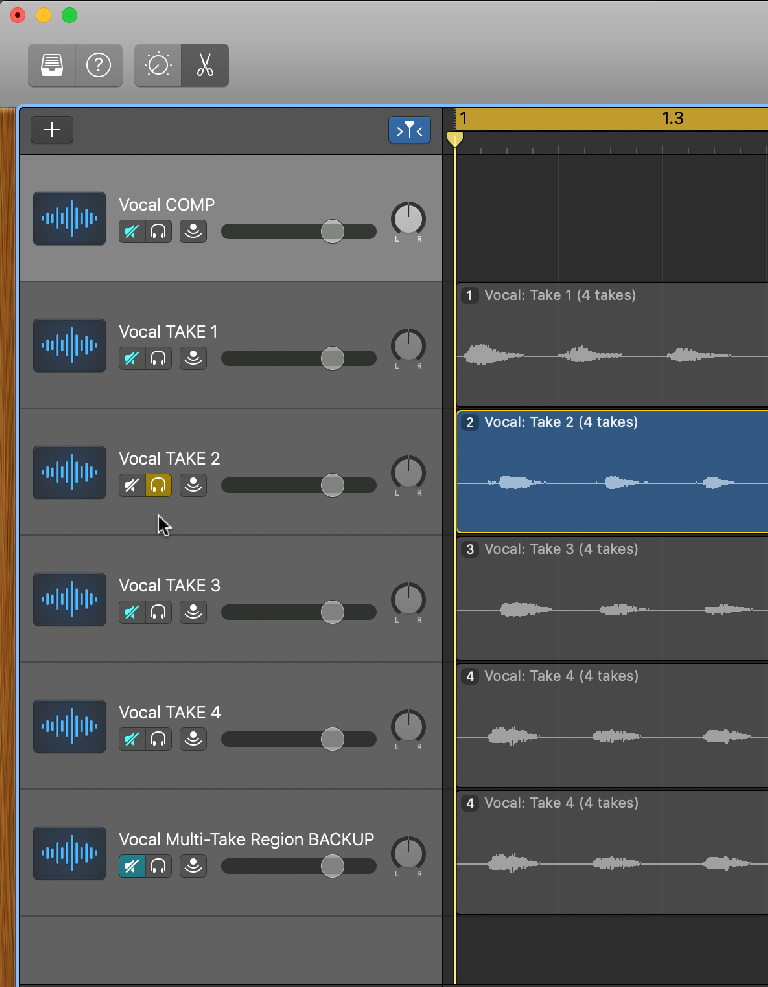 This won’t be as convenient as the Logic Take Folder implementation—there you can solo individual takes while still hearing the rest of the arrangement play. If you need to do that here in GB, you’d have to instead Mute all the Takes and just un-Mute them one at a time, to audition each take in context of the arrangement. 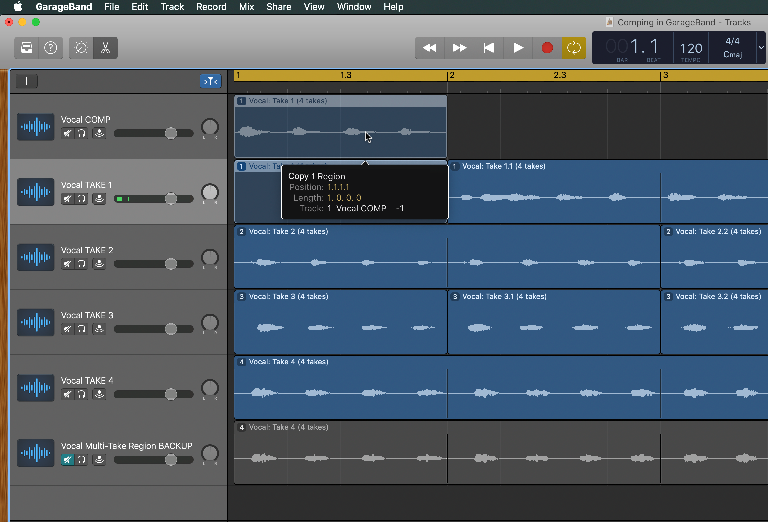 8. When the Comp is done, Mute the Take tracks (but keep them just in case)

You can make changes to the Comp, like the example mentioned earlier (changing the transition point in the Comp track between two Regions). You still can’t Trim the edges of the Comped Regions—any adjacent audio (or MIDI data) will still be gone—but since the full Takes will be available (the now-Muted Take tracks), it should be easy enough to grab a different or extended section from there. You can’t undo the cuts made in the Take tracks, but as long as you Copied (not Cut) each section to the Comp track, you can recover any part of an original Take that wasn’t used in the initial Comp. If things get too messy, you could go back to the original multi-Take Region in the Muted Backup track and swap that out for an individual Take track, selecting the correct Take for that Take track, to restore a full, un-cut version of that Take for further editing.

It’s not as elegant as the Logic Take Folder implementation—you’d have to create your own Take tracks for different Comps of different vocal/instrument parts—but this manual Take Folder emulation can be visually helpful and easier to work with, and for a long time this is how many people used to do Comping in Logic, before the Take Folder feature was introduced. Even though there’s a bit of setup involved, emulating Logic’s Take Folders can help make the process of Comping in GarageBand a little more capable than the simple but limited approach presented by default.