How to Create a Cashmere Cat Style Kick Bass in Reason

Language
Reason's modules are capable of creating almost any kind of sound you like. Here's how to create a Cashmere Cat-style kick bass patch using Subtractor.

I love my Volca Kick. To my ears, it perfectly emulates something close to a sick, huge 808 kick, with a keyboard where you can play it like a bass. ‘Throw Myself a Party’ from Cashmere Cat is a great example of a kick bass. So in this tutorial, I’m going to show you how to create a kick bass close to what’s in that song, as well as a patch that will make it really close to having your own Volca Kick... Sort of.

Now let’s get to the part that makes it a kick bass, right out of the gate. I’ll go to the Mod Envelope within the Subtractor and add a decent amount of Modulation (96). Then raise the decay up to 40. Now when you play the Subtractor you’ll already hear the kick effect, and as you move up keys it will sound like a cute little kick drum playing a melody. But  there are a few tweaks I’d recommend to the initial patch. 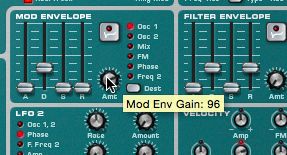 I’ll lower the polyphony all the way down to 1. This will ensure that there no notes playing on top of each other, which you do not want with a bass patch. And then I’ll change the Key Mode over to Legato. This will mean that we can move to other notes while we are holding down a key without the initial attack being triggered from the Mod Envelope. This makes the kick bass much more versatile as you can play it like a kick, and bass at the same time. But when you just want bass and no kick, you just sustain and play on top of other notes. Easy! 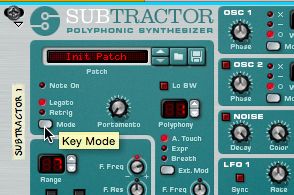 I’ll also raise the Portamento up to 50 so that I can get a fresh bend between notes. 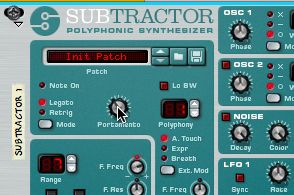 And raise the Amplitude Envelope’s Decay up to 100, allowing me to hold that kick out for a long time. But not indefinitely. 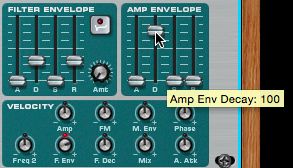 Now that we’ve got the basic patch, it would be great to thicken it up and also give it a little rumble and maybe overdrive it a bit. I’ll drop on a Pulveriser as an insert. And then Squash it up to 32%, while driving the Dirt up to 69%. Now it’s really standing out because of Squash, and has a little attitude because of the added distortion coming in from Dirt. 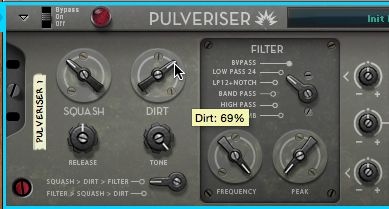 I’ll also lower the release to give a little more push, when the kick side of the kick bass hits. 16% was a good setting for my ears and speakers. But you might want to play with this setting a little bit, to dial it in right for yourself. I’ll also switch the Pulveriser’s Filter mode over to the LP12+Notch Filter setting. This adds a slight bit of definition in the mid and upper frequencies that wasn’t there before, when the filter cutoff and resonance are at the base settings. Feel free to explore here! 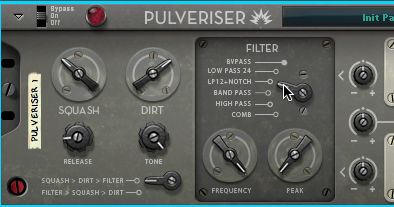 So far this kick bass has a lot of ‘oomph’ but it could use a little more definition, or it’s simply going to wind up a sub-bass later on. Which could be cool. But if we had a little distortion going, we could really make this bass sit nicely and actually have a little character on its own rather than just filling up space.

However simply running our hard work in to a distortion device in Reason will ruin the hard work we put in to getting the bass to feel like a bass and a kick. This is where Parallel tracks come in really handy. I’ll right click on my Subtractor Mix channel device, and select Create Parallel Track. On the newly created Parallel Channel or the Channel that is now labeled Subtractor, and has no effects within, I’ll create a Scream Unit and set its mode to Modulate, also known as Ring Modulation. Okay, now I can raise the frequency of the Ring Modulator by raising the P2 knob to 115 which gives us just a hint of Ring Modulator scream in the distance. And a great modulation routing possibility, should you feel like using on of the Subtractor’s LFOs, via CV. I’ll leave mine static however as I’m really just sort of using Scream as a secondary oscillator of distortion, mimicking the overdriven, self-oscillating filter of the Volca Kick I’m so used to.

This is my basic trick for doing this in Reason. And there are definitely a million and one other ways of putting a kick bass together. But this version will definitely sit nicely in a mix. And, where we’ve left off, there are also a lot of other possibilities in terms of modulation and additional distortion. I would highly encourage you to consider adding in some Body from inside the Scream unit, as it also adds a lot more life to this patch as well.