How to Clean Up Audio Recorded On Your Phone

You're just finishing recording audio on your phone and boom, the doorbell goes, or some other such unwanted happening. Or perhaps the backgrond noise was quite high. Here's what you can do about it.

The ability to scrub, enhance, and restore audio has long been developed by a bunch of different companies with varying success. I remember using SoundSoap back in the early days to clean up older recordings and get rid of unwanted artifacts. The tools we have today are far more advanced and there are varying degrees of noise reduction you can employ. Let’s take a look at a few concepts and some great solutions out there to make your mobile device audio shine!

One of the things to consider when applying EQ to cell phone audio is that it’s very tough to ‘add back in’ frequencies that were never recorded. It’s not as simple as adding a few dB of bass to a bass track. Mics on mobile devices are getting better, but they still don’t necessarily pick up those upper and lower frequencies with the kind of detail we’d like. Rather than spend a ton of time trying to pump 10dB of bass back in that isn’t there, I usually ask myself, “What frequencies that ARE there are the ones that are annoying me?”

With that in mind, I try to get a sound that is more pleasing to listen to by reducing unwanted frequencies that are less desirable. I typically use a much more subtractive process. By reducing some of the mid-heavy peaks, I was able to bring the whole track up to a better volume with less ‘nasal’ or annoying frequencies popping out at me.

From there, I’ll utilize a dynamic plugin to bring the volume up. You also will want to be very careful with dynamic leveling because the audio is likely super compressed already - don’t be too heavy handed here. Phones tend to have aggressive limiting and leveling to make sure that the audio doesn’t peak when recording or communicating, so it’s best to generally not add to that if you can avoid it.

I’ll usually follow up with a precision EQ to add a few subtle steps of ‘color’ here and there if I want to round it out after it’s at a reasonable volume. With those three steps (EQ -> Levels -> Precision EQ) I have found a lot of success with getting a desirable sound out of phones.

With that process in mind, it’s important to consider that if you’re going to do this often, picking up a dedicated tool for noise reduction and removal is a blessing. I use the iZotope RX suite and it has saved audio for me on more than one occasion. There are different noise reduction tools based on the source (specific modules that focus on removing clicks, hiss, hum, and vocal artifacts). Using the spectral de-noiser is a pretty simple process. You load it up, play some audio to ‘learn’ the noise profile (it’s great if you have some dead air before your actual performance starts, iZotope can really learn what’s gotta go from that), and decide how aggressive you want the plugin to be. 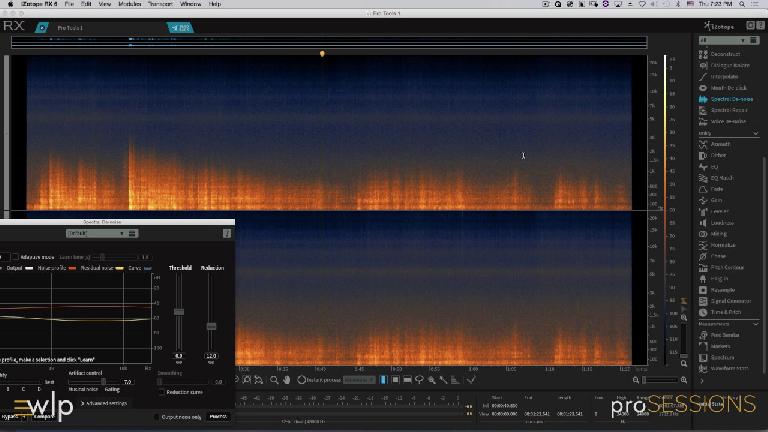 In general, I have found that popping RX Spectral DeNoiser up front and following up with my EQ/Leveling process has produced the results I was looking for. The biggest takeaway I found from spending the last few months cleaning up more cell phone audio than I ever thought I would have to is that treating each track I received like any mixing or mastering project I’d work on served me well. Most audio cleanup tools are a great first step, but they don’t replace the work of ‘working on’ the audio just like you would any project that comes through your studio.

Learn how to record audio, clean up audio and go deeper into sound design and music production: AskAudio Academy | macProVideo