How To Build A DIY MIDI Sustain Pedal Circuit

Just yesterday, I broke out the old Axiom 25. The trusty keyboard I have had for about 10 years. The one that has stood the test of time through tours, clubs and drinks being spilled on it! I was going to play some chords for a new tune I was working on. There was a big problem though, I couldn’t find my sustain pedal. Luckily, I knew that the sustain pedal circuits are simple… like really super simple.

When you plug a sustain pedal into a keyboard and press down a simple circuit—as simple as it gets—is closed and the sustain MIDI signal is activated for as long as the circuit remains closed.

So I made my own and you can too! Not only that, but you probably don’t even need to go to a store for anything. 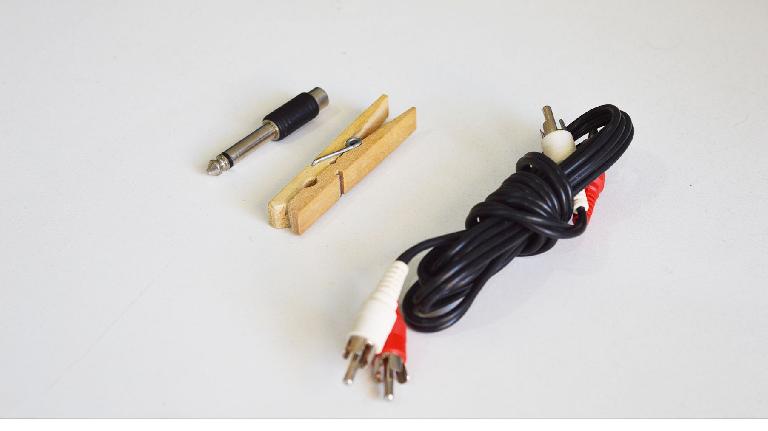 That’s it. Do you have everything you need laying around the house? Good.

Go ahead and separate the RCA cables. Then cut the end off of one of them. Cut as close to the plug as possible to conserve wire’s length.

Next, strip about 1–2 inch(es) off the protective sleeve of the wire. Be careful as the ground wires are extremely thin and fragile and encircle a second wire inside. We don’t want to cut any of the exposed wires. Though, don’t stress it if a few get lost in the process. Gently gather the exposed wires and twist them together making them one thicker, stronger wire.

Next, strip the protective layer off the second wire that was inside. I suggest stripping about half the length as the outer wire. That way the two wires have no chance of making a connection near the base.

That’s it! Once we ouch those two wires together the circuit is closed and we can activate the keyboards sustain function!! Can you believe it?

Now we can test this out.

Regular keyboard with sounds onboard

Put the adapter on the 1/8 end of the RCA cable we were working with and plug it into the sustain input/output of your keyboard. Quickly tap a note. Next touch the two ends of the wires together and tap the note again and you should hear the note sustained. Then take the wires apart and the sustain should stop.

Boot up your favorite DAW, if it’s a MIDI-only keyboard, and drop a piano on a MIDI channel. Tap a note to make sure the MIDI keyboard is functioning properly. Now touch the two wires together and tap the note again. You should hear the note sustained until you disconnect the wires.

There you have it. A functioning sustain circuit after less than 3 minutes! 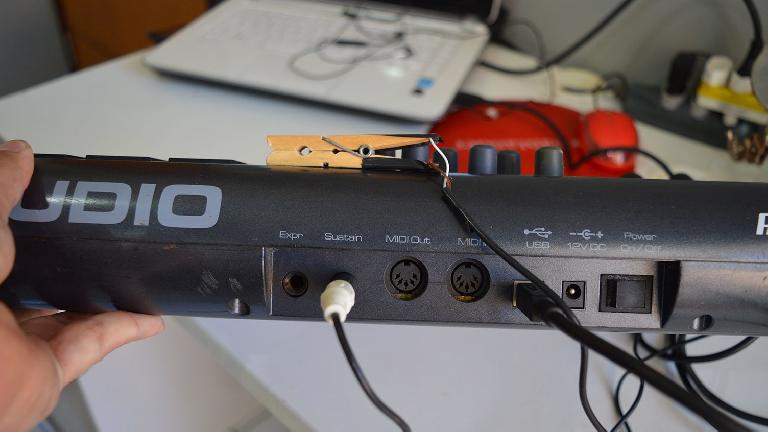 If the sustain is frozen

If, after you disconnect the two wires, the sustain is not released it means you have a short somewhere. Your best bet is to try the process again with the other RCA wire, as that’s probably the culprit. But if it isn’t, try a new adapter. And if it isn’t that, it might be your keyboard and that is beyond my expertise.

You could do something like take a few clothespins and fasten them side by side somehow. This is the main part of the pedal. Next, wrap each end of the exposed wires around separate paper clips. This isn’t necessary, but it makes the contact points larger, which might be a good idea.

Then tape or glue one of the paper clips to the inside top of the clothespins—the end you usually squeeze to open the pins—and the other to the inside bottom. You will want to fasten them as close to the end as you can, making sure that when they pins are squeezed the paperclips do in fact make a connection. 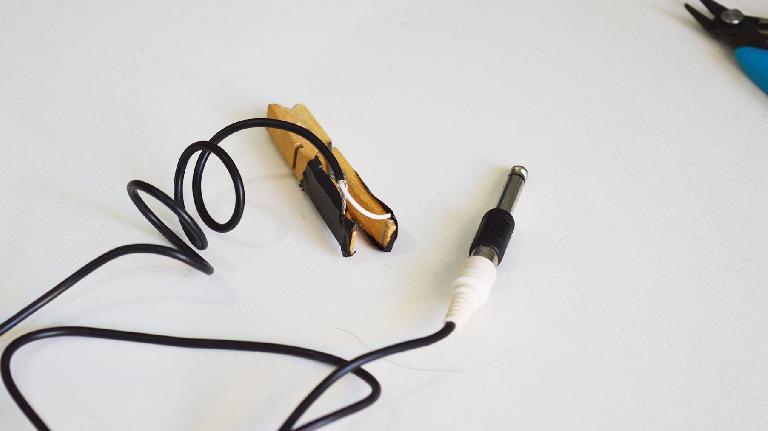