How Sound Affects You: Healing Tinnitus with Sound Therapy

Language
Many musicians and DJs suffer from tinnitus, or ringing in the ears. For some it can be a mild condition and for others, sadly, more debilitating. Lynda Arnold proposes sound therapy as a way to help. Figure 1 – The Ringing of Tinnitus

Tinnitus is a condition that causes prolonged buzzing or ringing in the ears. Over 50 million, or 1 in 6, people in the United States experience Tinnitus. 1 million of those people are Veterans and represent more than those suffering from PTSD. Prolonged exposure to loud noise including explosion and gunfire leave many of them with a constant and debilitating ringing in one or both ears. The rest of Tinnitus sufferers develop it from prolonged exposure to loud music from headphone use or from traumatic and loud events like the Boston Marathon bombing and 9/11. Certain antibiotics, like Levaquin, a Fluoroquinolone drug, have also been known to cause Tinnitus, which has lead researchers to question the theories surrounding the causes and effects of Tinnitus previously accepted by medical professionals.

Scientists have previously believed that the tiny hair cells in the inner ear become damaged and have trouble sending the air pressure messages to the brain via nerve messages to the auditory cortex. Now, new research shows that more of the brain's hearing centers, especially those related to emotion, memory and attention, are activated in tinnitus sufferers in tandem with the auditory cortex. This discovery is leading to new experiments in therapy, especially in music and sound therapy.

The Tomatis® Method is a program of filtered, specialized sound that has been used successfully for five decades in Europe with tinnitus sufferers. Laura Godwin, director of the Marin Listening and Learning Center in the San Francisco Bay Area, used this filtered music method approach to cure her own tinnitus and then became a certified Tomatis® SOLISTEN Practitioner. Drawing from her personal and professional experience with tinnitus, she now understands that this high frequency ringing is actually the sound of one's own nervous system, unmasked. By first identifying and working with the specific frequency of tinnitus, Godwin collaborates with her clients to transform their physical and emotional relationship to tinnitus through the Tomatis® technology and individualized support.

The Tomatis® approach understands that successful alleviation of this auditory interference must include two components: A physical re-education of the ear and brain through the sound programming, and an emotional examination and modification of the underlying relationship to the tinnitus. On the biomechanical level, the filtered sound of the Tomatis program activates and properly tensions the hammer and stirrup muscles of the ear.  These two tiniest muscles of the body are two of the most crucial to overall well-being, and are often strained or damaged in tinnitus sufferers.  When healthy tone is restored to these muscles, the ear can protect itself from the interference of high pitched ringing, and can optimally select and discriminate for desired sounds, such as focusing on a personal conversation in the midst of a crowded room.  Many tinnitus sufferers have other symptoms of Auditory Processing Disorder (APD), usually emerging after the onset of the tinnitus. The Tomatis® Method addresses the causes of APD.  Secondary factors such as stress and emotional regulation are also incorporated in a holistic approach to tinnitus.

New Research conducted by Daniel B Polley at the Massachusetts Eye and Ear center using specifically notched (EQ'd) music has yielded some promising results. Since listening to music activates most of our brain centers, especially the emotional centers, Dr. Polley believes that music therapy is one of the keys to long-term brain wave reprogramming which is also called neural plasticity. When listening to the notched music, users report a decrease in the volume of the Tinnitus. The notes around the disturbed parts of the auditory cortex have a chance to 'fill-in' and possibly influence the reprogramming of the damaged brain waves and nerve patterns.  Dr. Polley also developed an audio game for tinnitus suffers that allows them to identify the tinnitus tones and avoid them as the 'villains' of the game. This new area of research is continuing to be developed and refined as more case studies are done about the long-term effects of this exciting non-invasive treatment. 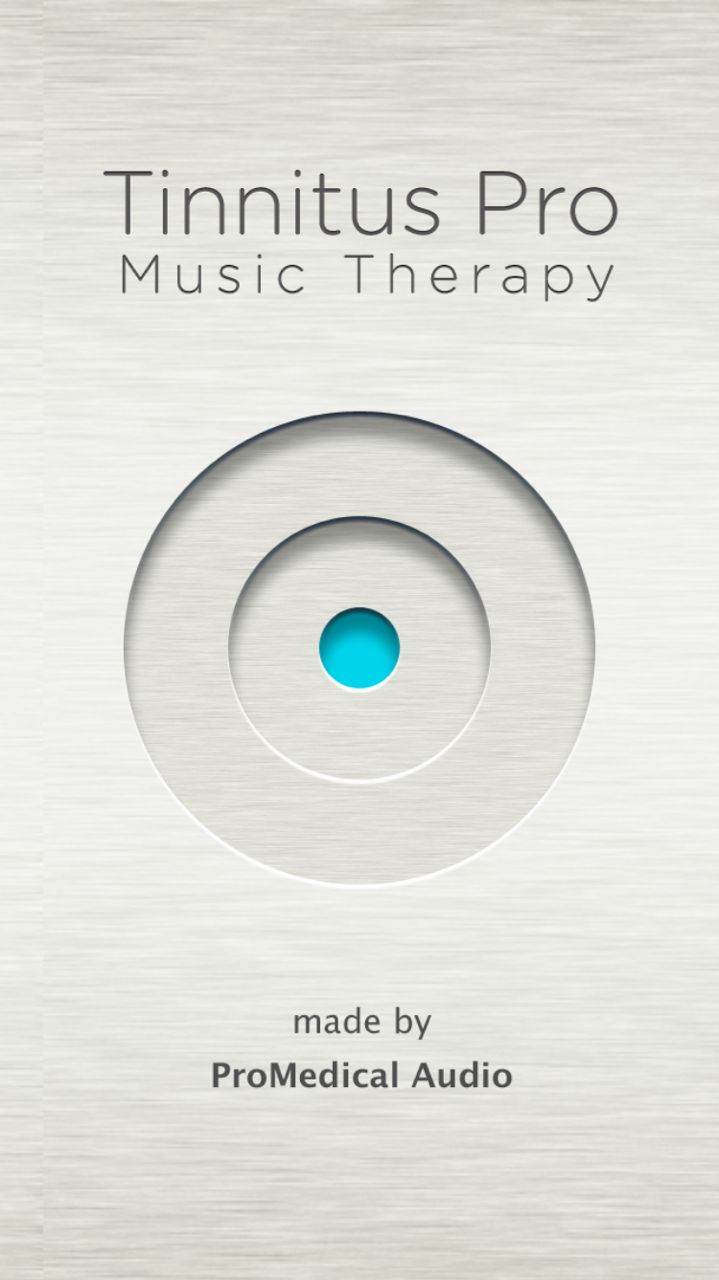 One of the new, easily accessible tools for obtaining Tinnitus relief with the hope of retraining the brain is an App for iOS called Tinnitus Pro by Pro Medical Audio. Tinnitus Pro Music Therapy allows tinnitus sufferers to enjoy their own music while reducing their Tinnitus. The App is the result of research conducted by a team of scientists at the Institute for Biomagnetism and Biosignalanalysis and the Department of Otorhinolaryngology in Muenster, Germany. 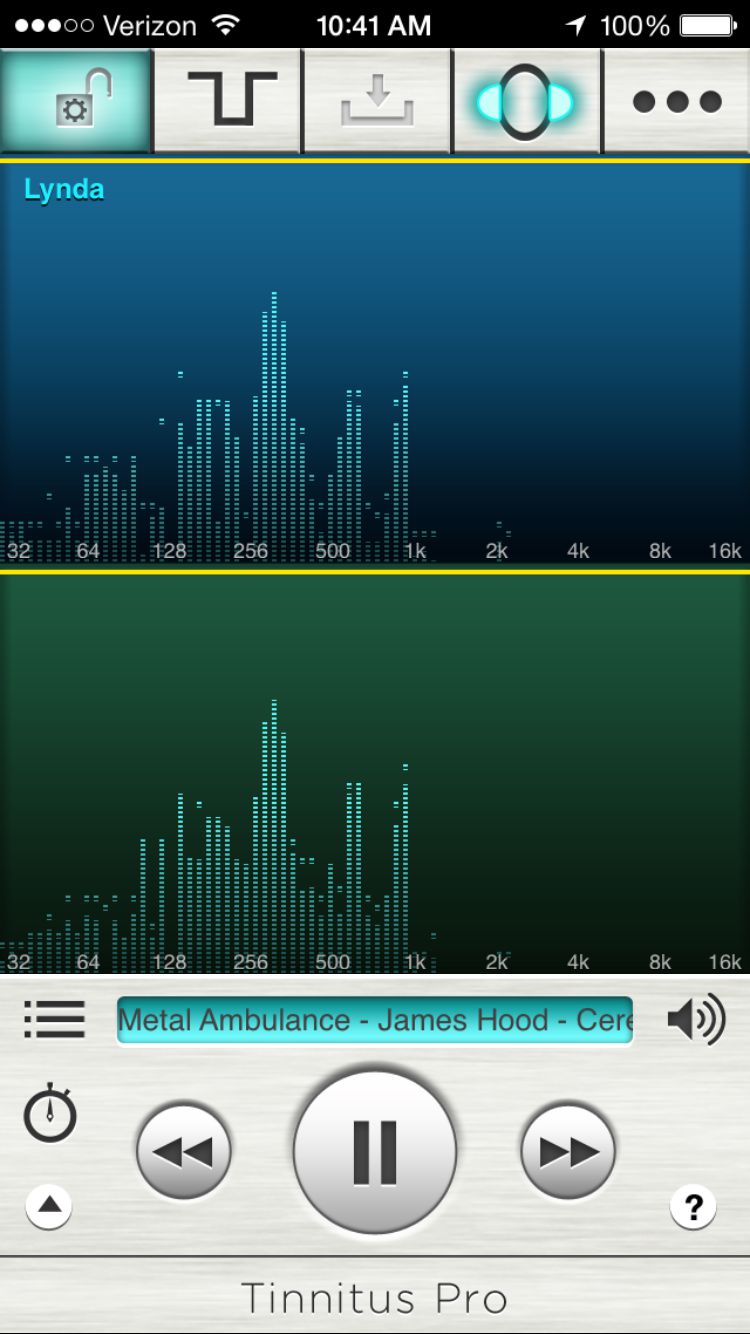 Tinnitus Pro identifies a one-octave band around the patient's tinnitus frequency and removes the entire band from the music. The brain immediately gets relief and with prolonged use and cases studies show a significant reduction in the loudness of their tinnitus. 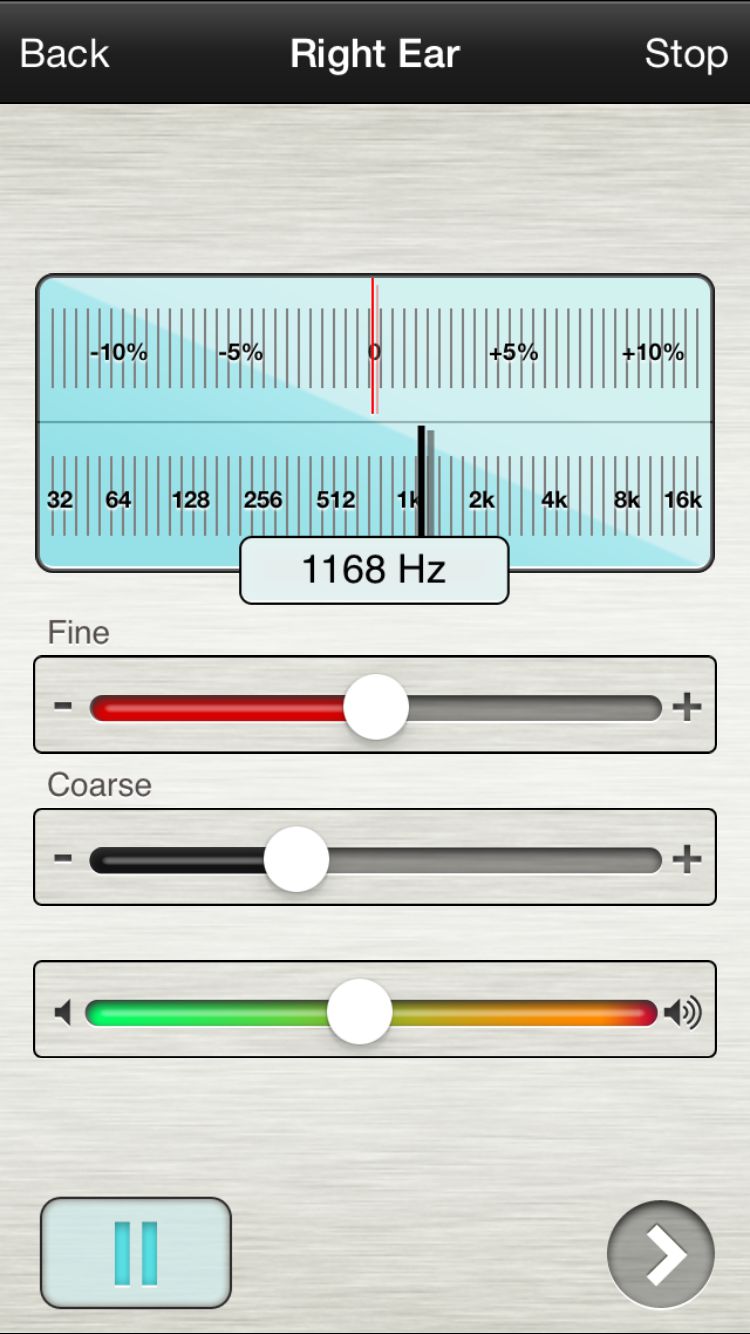 To identify the Tinnitus frequency in one or both ears, patients use a frequency sweep sliders to match the ringing tone. The course and fine sliders allow users to match the exact pitch of their Tinnitus, thus increasing the effectiveness of the treatment. Next, the perceived loudness of the Tinnitus is set. Patients can then start listening to music of their choice immediately with the notched frequencies. The interface is clean and easy to use. The embedded music browser, connected to users' iTunes library, makes loading in music a simple process. Pro Medical Audio includes Pink, Brown and White Noise Ambient tracks for people who would rather listen to that, but based on the music therapy research, it would make more sense for people to listen to music that is emotionally pleasing in order to access those parts of the brain connected to the auditory cortex. There are a few other Tinnitus Apps already on the market that offer nature sounds and slightly different interfaces but provide a similar frequency matching and filtering process.

It's clear more research needs to be done to see if these new tools will help eliminate Tinnitus entirely but initial results are promising. The potential reach of the iOS App certainty makes the technology accessible to many more people around the world and will hopefully lead to further development and testing as more try it out. I'm going to be optimistic and say it's another victory for the future of healing through sound.

Peter
Wow, this is fantastic news. I had a sneaking suspicion this may be a brain problem more than an ear problem. I say that because I have head and physical injuries that according to the medical profession I can't heal. Using neuroplasticity and hypnosis I have and I'm still in the process of healing. Now, it's time to take care of the ringing in my ears.
Great article, I'm very excited.