How I Learned to Stop Worrying About SoundCloud Takedowns

Language
Aside from piracy of your own music, one of the most annoying things for modern musicians is a SoundCloud takedown or account suspension, especially when not justified. Here's why you need not worry.

2015 hasn’t been the best year for SoundCloud. Frequent takedowns and account suspensions have plagued the company with bad PR. For a platform that was once thought of as one of the most innovative things to happen to the music industry in recent history, this spells disaster. Not just for the company but also for its users. The early days of SoundCloud were marked by a feeling of streaming in the Wild West, anything went. Streaming was just a preamble to downloads, and you could pretty much upload anything you wanted with little to no recourse. Today streaming is the dominant way to consume music and where SoundCloud was once the leader, the streaming revolution now sees SoundCloud struggle to keep up with its biggest issues: monetizing the service and properly paying rights holders.

Many have seen SoundCloud’s drastic changes over the last few years as nails in the coffin for the service. Yet despite the often confusing changes, SoundCloud  continues to grow. While outlets like Thump have pointed to the “Great SoundCloud Purge of 2015” what’s actually happening with its listener base is quite the contrary. According to British research firm GlobalWebIndex, “1 in 10 online users between 16 and 64 are using SoundCloud at least once a month.” If you plan on building your audience and brand, any talk of deleting your SoundCloud right now would be similar to saying you were quitting Facebook. You may not like the rules but you need it if you plan on reaching your audience. 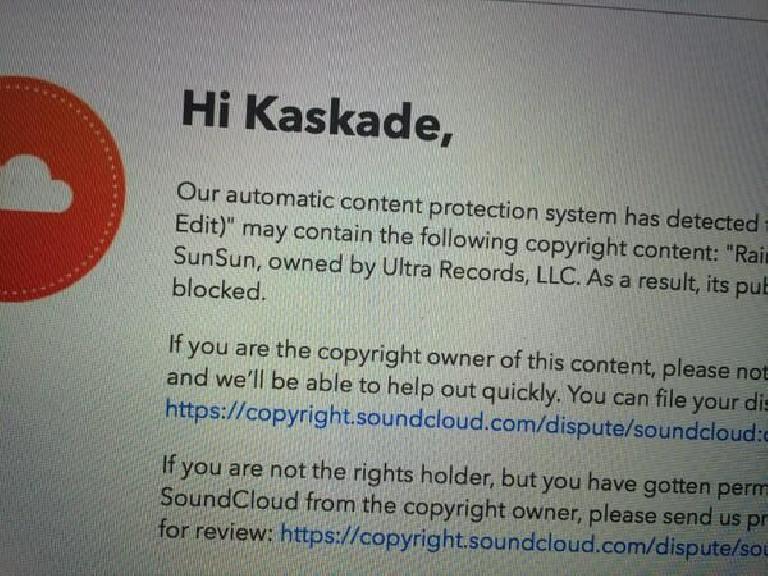 Things came to a head last year after SoundCloud failed to cut a deal with Sony Music. A rash of DMCA notices were sent out across the platform as Sony went about removing any of the music or derivative works associated with any artist signed to Sony or its subsidiaries. One of the “victims” of this was American DJ/Producer Kaskade. Due to his agreement with Ultra, much of his own self-produced music was removed as well as free bootlegs he had on his page. In total he received 32 DMCA notices.

Like many other users, his account was in danger of being deleted. In a blog post he was clearly upset about his own music being taken down but admitted that "Some tracks were absolutely rule breakers. The mashups." While he goes on to comment on the ridiculous inefficiency of outdated copyright laws and how they hurt independent musicians, the fact still remains posting unauthorized remixes is against the law in most countries.

Kaskade is preaching to the choir when he states that, “Countless artists have launched their careers through mashups, bootlegs, remixes and music sharing. These laws and page take-downs are cutting us down at the knees.” And again while this may be true, SoundCloud and other music streaming services are under immense pressure to answer the rich old men that control the industry. If you haven’t cleared the works then you are breaking the law and you run the risk of losing your account. However there are ways around this.

Of course there are a few other sites that allow you to upload your own content: Hearthis.at and Bandcamp. In addition to allowing you to share your own content both sites allow you to easily monetize content. However it’s best to keep with the same model of not uploading illegal content to these sites as well. In the case of hearthis.at, while it is a much smaller site and you may be able to upload your music in without incident, it is only a matter of time before they are smacked with the same complaints that SoundCloud was.

In terms of having these tracks available for your fans to enjoy, YouTube may be your best bet. Earlier this year Music Business Weekly called YouTube, “The biggest music streaming network on earth.” It's growing faster than Spotify, Apple Music and pretty much anyone else in the streaming market. While SoundCloud is still clamoring to instate a widespread and reliable pay out structure, YouTube has created a way to make sure rights holders get paid. If copyrighted content is detected, YouTube allows for the rights holder to receive compensation from any revenue generated by the video.

My Mix Was So Hot SoundCloud Had To Remove It 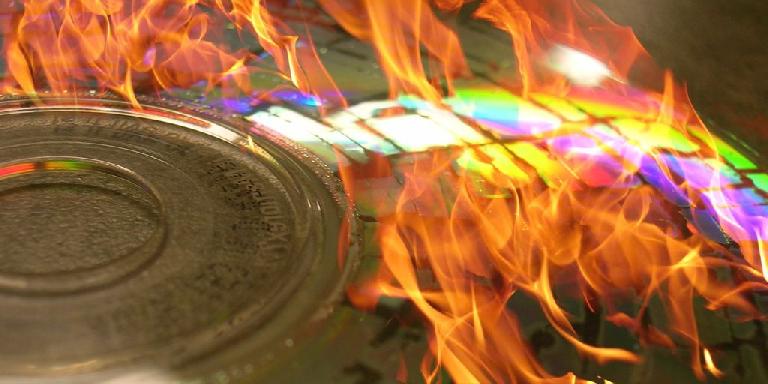 This still doesn’t solve the issue at hand that you are uploading copyrighted content without authorization. And this is the reason the major labels point to when DJs ask why their mixes keep getting removed from the site. Like remixes and edits, DJ mixes were a core part of the site and provided proof for many creators that their music was being supported. And while DJs may think that their mixes are covered under fair use, just because you have purchased a track doesn’t mean that you have paid for the rights to distribute. Copyright law, especially when it comes to fair use is ambiguous and complicated, but this much is clear: it does not cover DJ mixes.

There are some alternatives, albeit one that will net far less plays. First of course is Mixcloud, which difers from SoundCloud in that it is registered as, “A licensed radio service (that) has agreements with various collecting societies around the world.” However as the name states, you can only upload full length mixes and as one of Mixcloud’s founders Nikhil Shah admits, “Not offering downloads has been a challenge for us in terms of persuading the content creator to use a platform like ours.”

An even better option, and one that may provide you with more promotional power would be to start hosting your mixes as podcasts via iTunes or PodOmatic. With proper promotion many artists have been able to build solid followings and increase their fan base because of a successful podcast. Getting your show up on either of these services is fairly easy, and you have the ability to reach people in a whole new way. In 2014, according to The Washington Post, podcast subscriptions reached 1 billion people.

But SoundCloud Removed My Song 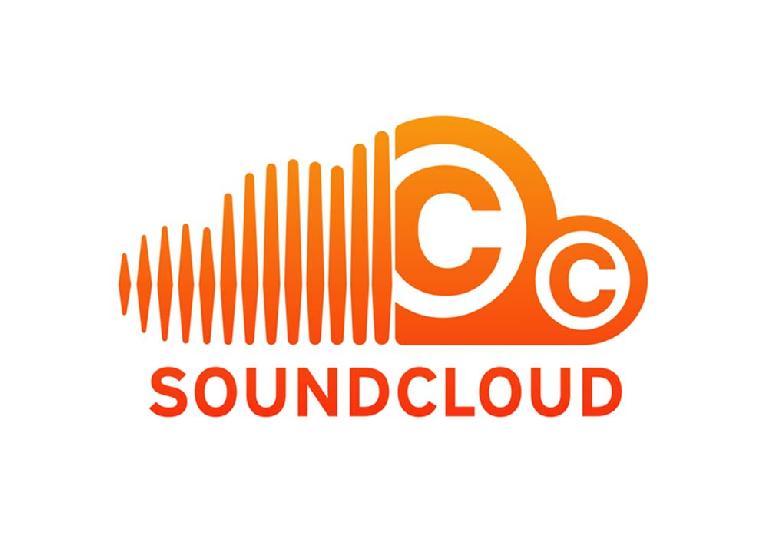 So we’ve covered the basics of copyright infringement but what if, as it often has, SoundCloud claims you are infringing on yourself. Personally this has happened to me on 3 separate occasions.  Yes while this seems ridiculous, with no one necessarily manning the algorithm it is something that happens. Simply responding to the claim will usually get your track reinstated and fairly quickly.

This still doesn’t solve the issue that the copyright detection engine has some serious flaws. Producer/Dj Plastician who also fallen victim to this told FACT magazine that while he sells his music via Band Camp, “The majority of our purchases come from links inside SoundCloud, so it would be a massive loss to have our account frozen.”

This does call to mind another important aspect of the entire debate. Why hasn’t SoundCloud found an effective way to support the artists monetarily? Spotify, Pandora and Apple Music all offer ways to make sure that rights holders are properly, albeit menially, paid for their work. Statistics company Nielsen Music found in their year-end report that 2014 was the worst year on record for music sales. It is confounding why SoundCloud has done such a poor job in rolling out their On SoundCloud program to their wider creator base. Currently it is an invite only program and has only been offered to mostly higher level artists and record labels via their distribution channels.

Their two largest competitors Spotify and Apple Music are quite transparent about their process. Spotify requires that you gain 250 followers to take control of your account and upload content. Apple Music requires that you already have music uploaded to iTunes then asks that you fill out a simple form to verify you are in fact who you say you are and after a short waiting period, you are in. This is the thing that SoundCloud has been lacking all along, transparency.

When the debate gets brought up rarely does anyone mention the direct to fan model. Possibly because people have spent so much time paying attention to social media that the idea of maintaining or even building an email list seems passé. And while building a social media presence is necessary, the conversion rate for email marketing can’t be beat. Just ask Bassnectar who has been a heavy proponent of the direct to fan model for years, in fact it was with his help that one of the largest direct to fan platforms for musicians was built, Topspin.

There are lots of ways to use email marketing to get what you need, often times much faster and more effectively than through social media. In addition to email marketing you can leverage your list with music PR plarforms like LabelEngine and FATdrop. Not only do these services help you organize your PR campaigns, they also carry with them comment to download functions. Offering direct feedback on your music from whoever you decide to send it to.

The biggest advantage to having an email list is owning your audience for life. Most people hold on to email addresses forever, just look at how many people still have @aol.com addresses! Having their email address will ensure that no matter what the en vogue social media site is of the time, you will always be able to get into contact with your fans and supporters.

SoundCloud isn’t going anywhere anytime soon. Copyright laws aren’t changing anytime soon. And this is just the most recent in a long history of the music industry big wigs getting scared that someone is coming for their money, anytime the dominant technology changes they freak out and often times it's fans and artists that feel the hurt. These are all constants in the industry. Instead of beating a dead horse, one of your best courses of action is not only to find the ways around them but to create original content. We are living in a time when we have the resources at our fingertips to make amazing music for next to nothing! So stop complaining and start creating!

Want to learn about music business, royalties, performing rights? Check this out! 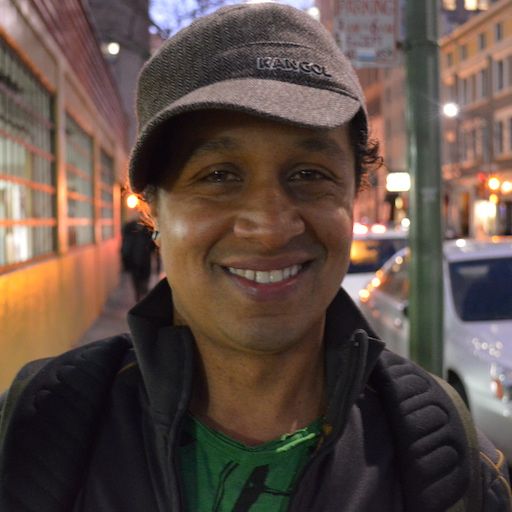 Alexander Dias is writer, producer and A&R for Punks Music. As a writer he has covered music tech, Dj and dance music culture, and event coverage. As a producer, whose weapon of choice in Ableton, he has released music under the name Sychosis for several years specializing in bass heavy breakbeat. When Alex isnâ€™t writing about music,... Read More