Language
Session Automation is one of the big features in Ableton Live 9 and as Noah Pred demonstrates is something you should be using both in the studio and during live performance.

Session Automation is one of the most hotly-tipped new features in Live 9—something users have been clamouring for since clip envelope automation was first introduced. So what's the big deal? As you'll see, real-time capture of looping parameter changes opens up worlds of potential for both sound design in the studio and powerful improvisation on stage.

The beauty of Session Automation is hands-on, real-time control. While you can still perform Session Automation with your mouse or trackpad, ideally you'll want to have a MIDI Controller or Control Surface such as Ableton's Push configured and ready to go. To do this, go to the MIDI tab of your preferences and ensure your controller is enabled for Remote input so that Live can receive control change data from the device knobs and sliders. In this case, I've got both my Push and Korg nanoKONTROL configured for tweaking (Pic 1). 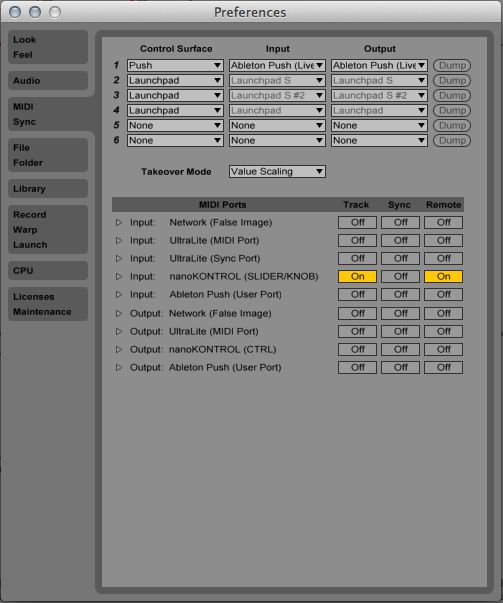 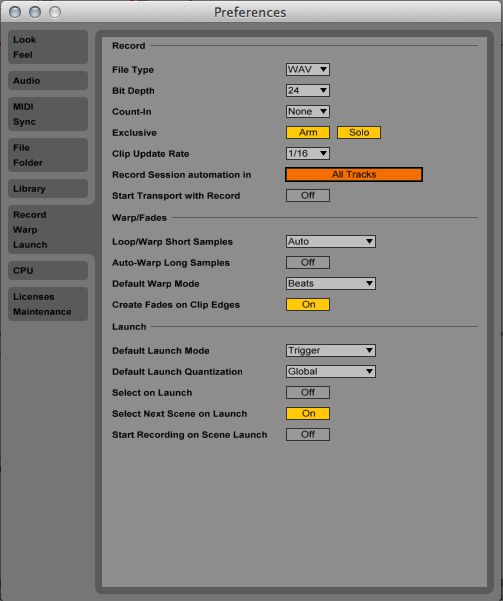 Now we need to make sure that Session Automation is enabled, via the Automation Arm button to the right of Live's transport—the one that has a diagonal line with small breakpoint circles at either end: this button should be lit up (Pic 3). Finally, to enable the actual input of automation data, you'll want to click the Session Record Button (the one with a big “O” in it) so it's lit up red. Since I've opted to record Session Automation to all tracks in my preferences, with this button enabled, all currently playing clip triangles light up red to symbolize being armed for automation input (Pic 4); if I had my Record Session Automation preferences set for armed tracks only, just the currently-armed stabs track would have a red clip triangle. 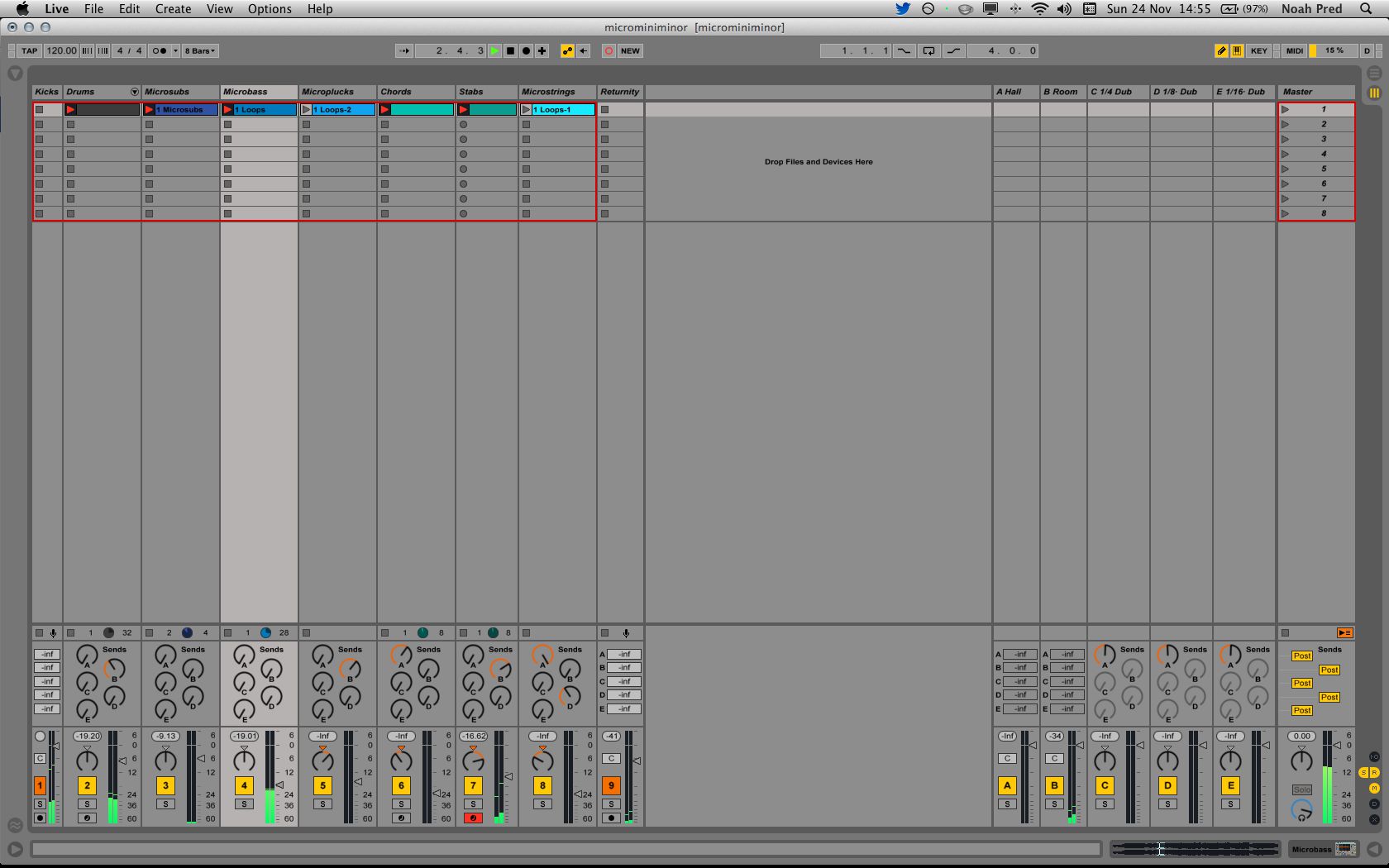 Right now I have a two-bar chord stab programmed to an instance of Analog (Pic 5), but I'd like to make it more dynamic. 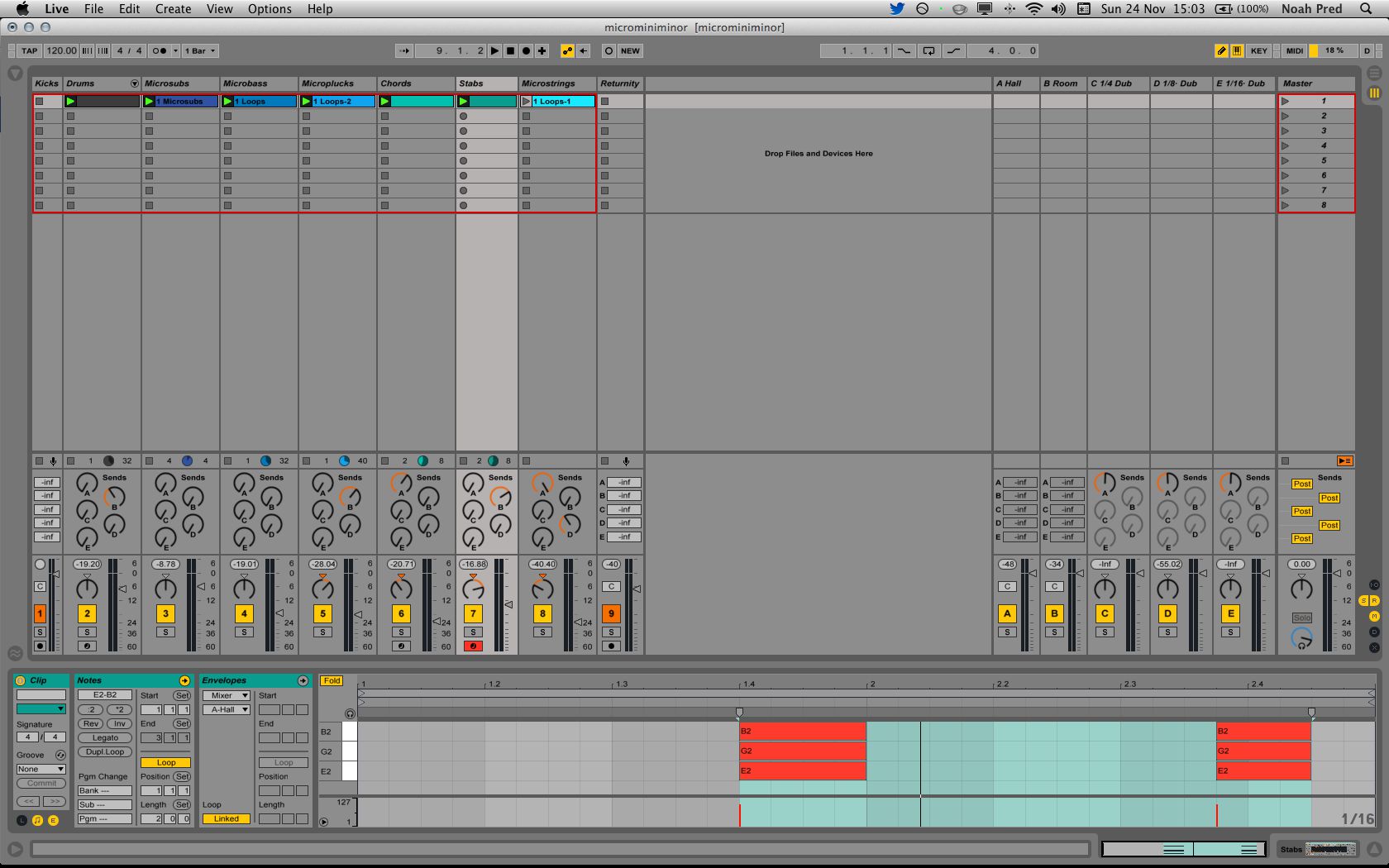 First I'll double the loop-length by selecting the loop brace and hitting Command-D, or simply pushing the Double button on Push; I'll then repeat this step once more to get it to an eight-bar loop (Pic 6). 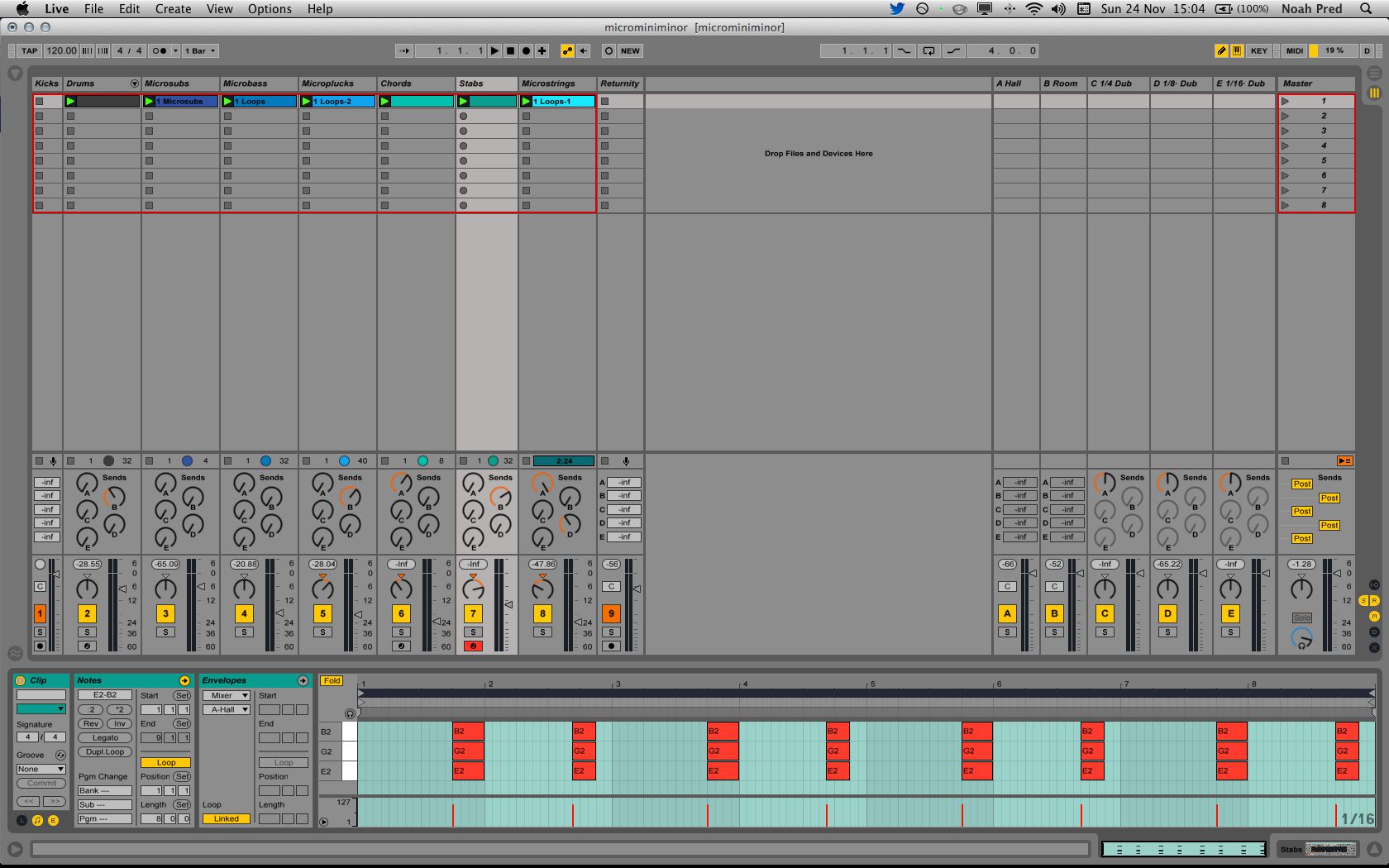 Before I record any automation or even enable Live to be able to do so, I'm going to play around a bit with the devices on this track to determine which parameters I want to automate; in this case, I'll use the filter envelope amount, filter envelope decay, detuning, and some effect sends. It's important to point out that everything I've done so far, including the loop-length extension, can be done in real time with any and all clips playing.   Since I've figured out the parameters I want to tweak, I can now enable Session Recording by clicking the Session Record button in the transport with a big “O” on it, and start tweaking away. As soon as these parameters have been tweaked, you'll see the Automation-signifying red dot appear next to these parameters' controls (Pic 7). 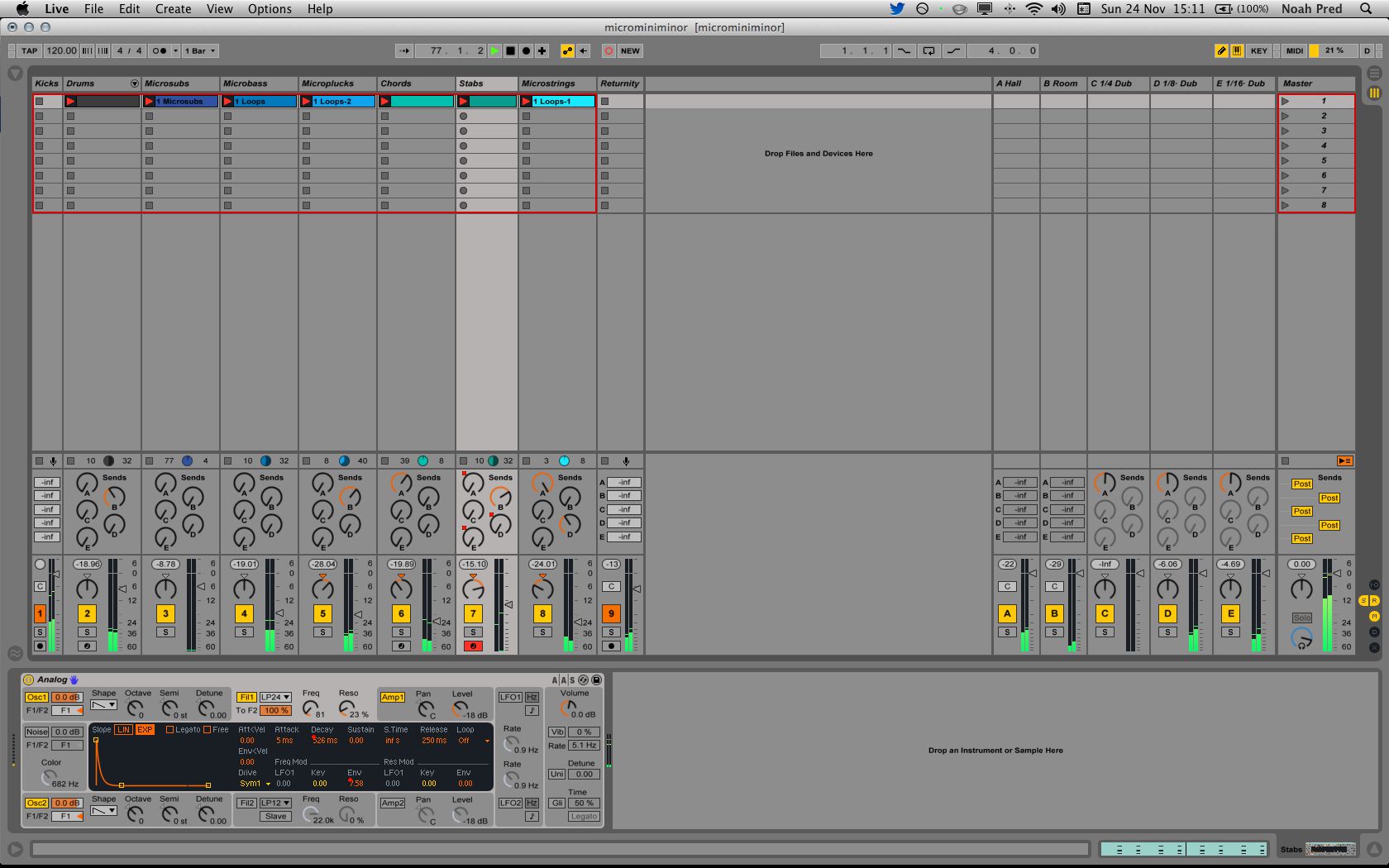 By right- or Control-clicking an automated parameter, we gain access to a few important commands: we can delete the automation, and select to show it in the clip view as either automation, or as modulation—which is what I wish to do for the filter envelope amount, since it dipped too low at a few key points (Pic 8). 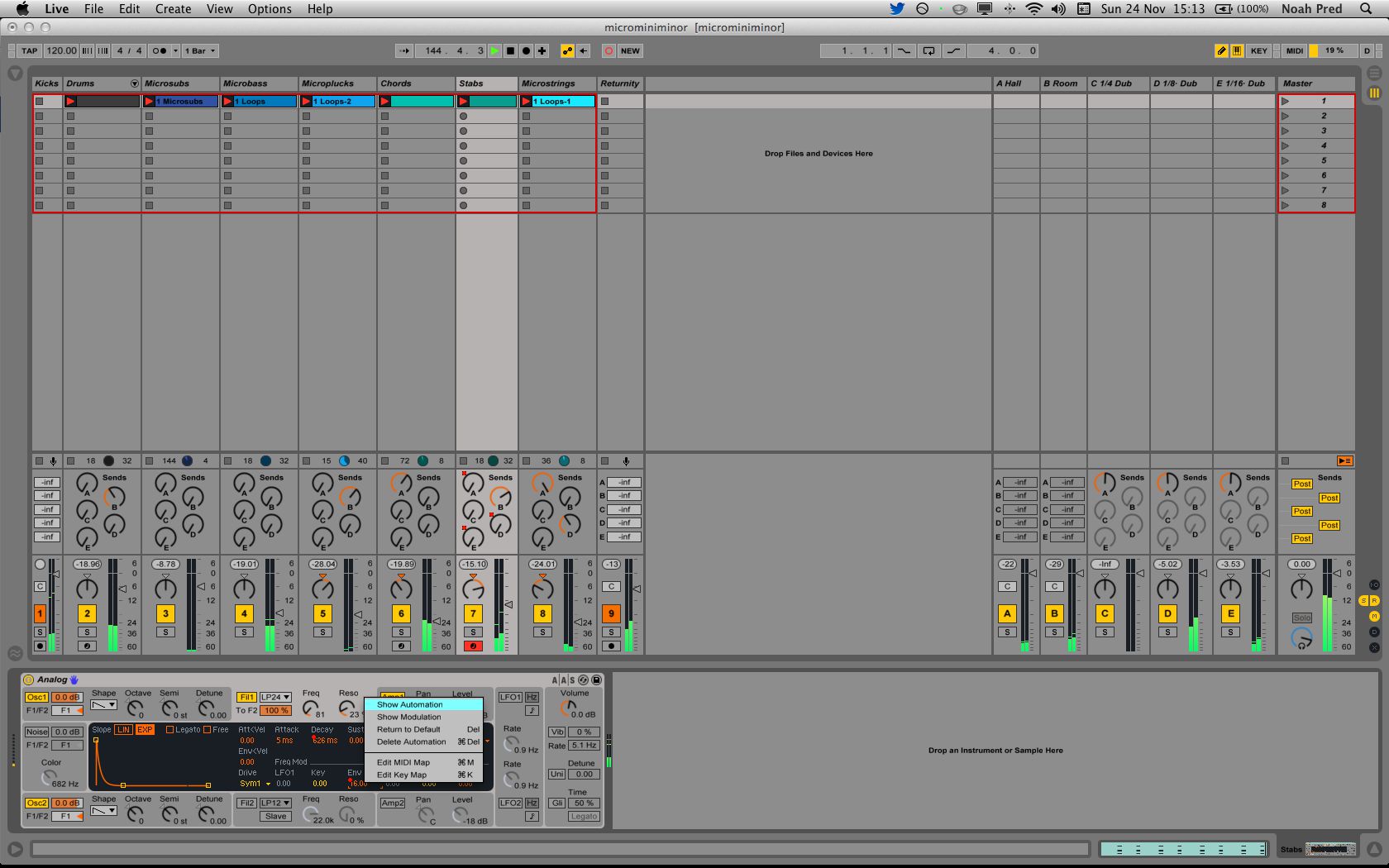 Clicking the “Show Automation” option has brought us to the Clip Envelope editing area (Pic 9)—also accessible in Clip Detail view by clicking the “E” button in the lower left corner, and then making sure the arrow to the right of the Envelopes title is enabled by clicking it. 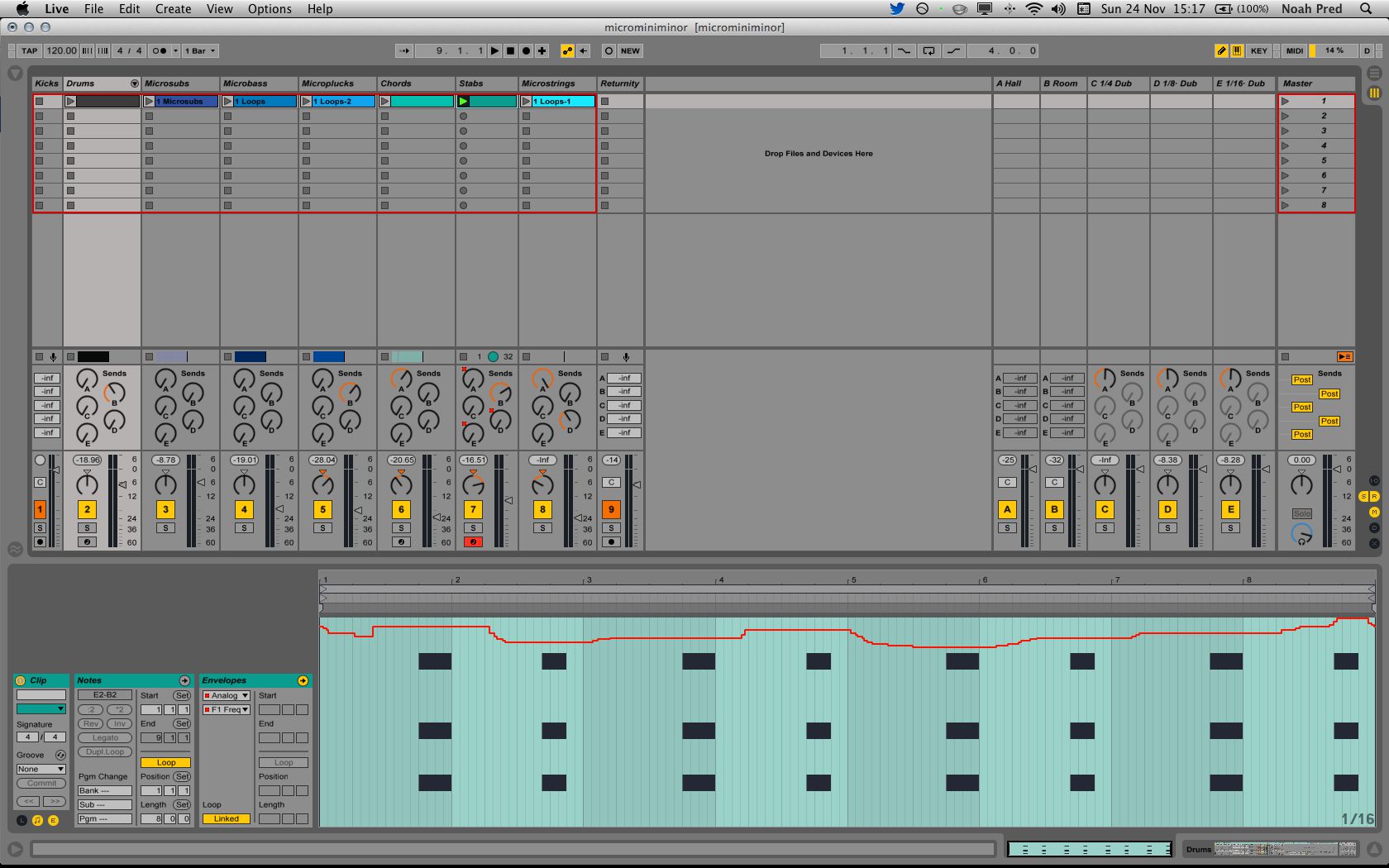 Now that we're in the Clip Envelope editor, there's a few ways to approach it. In this case, I'll first switch to Edit mode and click within the clip display area to make sure the entire envelope span is not selected. Now I can hover just beneath an unbroken envelope segment until it turns blue, then click to grab and drag this entire segment—which is what I'll do for the areas that are both too high or too low in value (Pic 10). 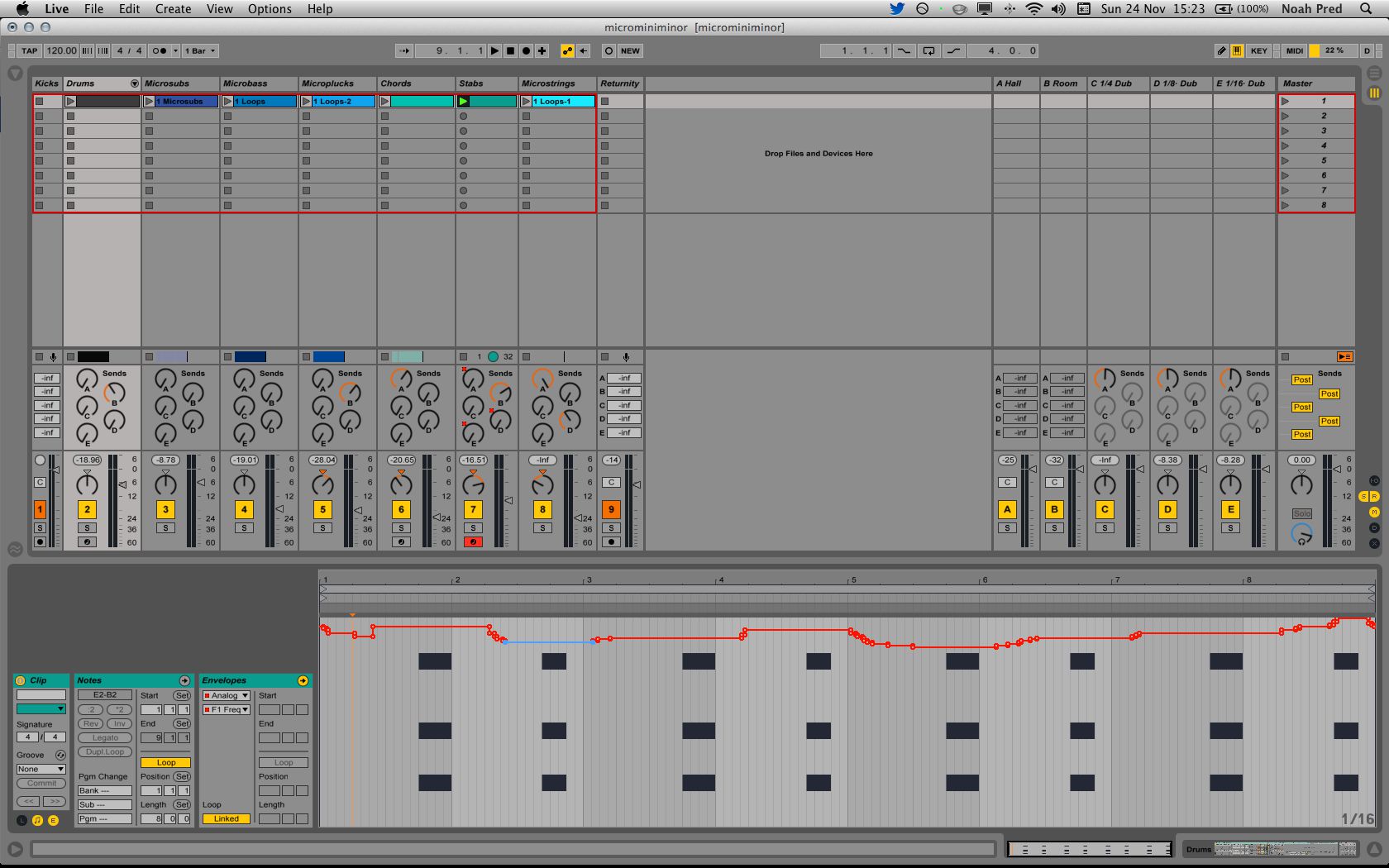 We can also create diagonal lines by clicking to add or remove breakpoints and drag them as desired. Holding the Option key while hovering beneath a line segment allows us to click and drag up or down to give it a curved shape. Or, as I'll do now, we can switch to Draw mode, change the grid interval (in this case, fairly wide, to one full bar) and draw the desired automation values in quantized steps (Pic 12). I also recorded some Send amount automation for some dub effects, but I want to make these reverb and echo dubs occur a bit less predictably. First, I'll click the Send A dial on the stab track to jump directly to that parameter's envelope in the Clip Envelope detail view, and clean it up with quantized automation using the Draw tool (Pic 13). Now, I'll click the button that says “Linked” beneath where it says “Loop” in the Envelopes settings area; the button will now go orange and instead read “Unlinked”. We can see the Start, End, Loop, Position and Length controls are now activated to their right; you'll notice that the loop brace in the Envelope editor has gone orange as well (Pic 14). What does this mean? By default, any clip envelope is linked to the duration of the audio or MIDI loop itself; since this was an eight-bar MIDI clip, any automation attached to it will loop over eight bars as well—unless we specify otherwise, which is just what we've done here by unlinking the Send A automation envelope. I'll now set it to a 12-bar length via the numeric Loop Length entry field, but I could also set this by stretching the now-orange Envelope loop brace accordingly. It's important to recognize that an orange loop-brace pertains only to the duration of the currently viewed parameter automation—while the default grey and black loop brace will adjust the duration of the entire clip's loop. Now that we've changed the length for this parameter, our reverb dub via Send A will repeat on a 12-bar (rather than 8) cycle (Pic 15). Since any automated parameter envelope can have its own discrete loop length, I'll set the other two send amounts to unusual lengths (10 and 14 bars, respectively), ensuring that our three dub sends won't repeat in the same pattern for a much longer period than the 8-bar repetition we had originally recorded. By unlinking various automation envelopes, we can inject our loops with all sorts of evolving, shifting, and higher-order dynamics that extend far beyond the duration of the original musical content.

When you consider that any effect, instrument, rack, configured third-party plug-in, or mixer device parameter on any audio or MIDI track in your set is available for both Session Automation and linked or unlinked Clip Envelope editing and Modulation, limitless possibilities emerge: explore them!