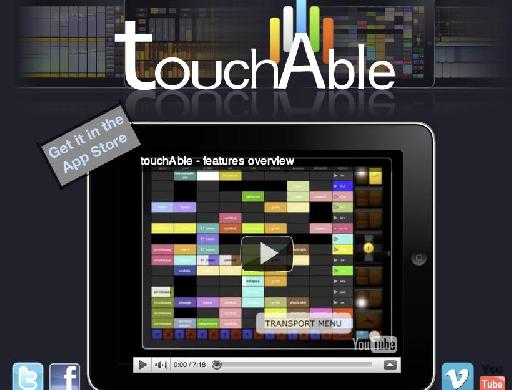 Language
Touching it up with TouchAble I'm in the studio after a fresh update to Ableton Live.Â I haven't showered, my HP tablet died, I couldn't get TouchAble to work last night, and our water heater is on th

Touching it up with TouchAble

I'm in the studio after a fresh update to Ableton Live. I haven't showered, my HP tablet died, I couldn't get TouchAble to work last night, and our water heater is on the fritz.  So why am I grinning ear-to-ear, you ask?

I have been invigorated this afternoon after a long walk when it dawned on me: You can have LiveControl AND the brand-new, more sophisticated native iPad app, just released, that everyone is talking about: TouchAble..

The new update to Ableton Live is 8.1.5 is now available and I highly recommend this update to anyone who followed along in the last tutorial: "Hands-On Control with Ableton Live using LiveControl". One of the great things about Ableton Live is that fact that each update is its own separate entity.  For example, I have Live versions 8.1.1, 8.1.3, and 8.1.5 all on my macbook. But, why would I want to keep many versions of Live on my computer all at the same time?  The reason is for redundancy, which as it turns out is a good thing with computers.

The control surface that we used in the last tutorial was an iPad running LiveControl via touchOSC.  The installation of LiveControl put a few customized python files in the remote scripts directory of the Ableton Live installation.  Last night, when I installed TouchAble, it ran really, really slow.  It was unusable.  Much to my chagrin, I went to sleep not being able to reap this low-hanging fruit that has been getting so much attention and press lately.  The lure of more parameters available on the interface, an easier setup, better graphics, and overall a more concise, streamlined approach was seemingly out of reach.

That is...until I updated Ableton Live.  I then installed TouchAble onto Live 8.1.5.  Now, it is running like a champ!  I have LiveControl all set up with Live 8.1.3 and TouchAble now running on Live 8.1.5, so that I can switch between the two to my heart's content.   I wanted to share that with you just in case someone is experiencing difficulties installing numerous control surfaces such as this.  Just dedicate one iteration of Ableton Live to a particular setup, instead of having one mad-scientist evening trying to figure out one massive midi-mess.

All of the Tricks, None of the Clicks 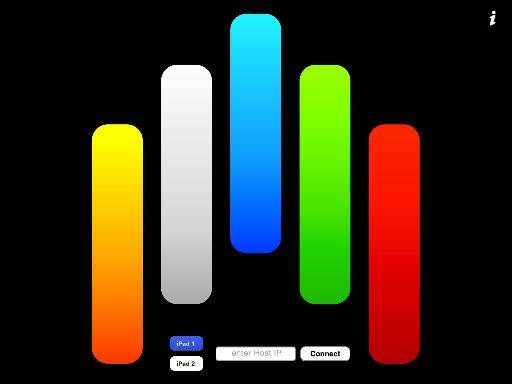 Figure 2 - Connect to your iPad

The setup of TouchAble is a breeze, and there is a fabulous step-by-step tutorial already on TouchAble's website.

TouchAble provides absolute control over Ableton Live.  One of the features of TouchAble that goes beyond the capabilities of the aforementioned LiveControl is that it can set the length of clips and their loop start point.  This is great, because the action is quantized, meaning that you can do in-time adjustments to the playback position of your clip and it stays in sync.  This means that when you tweak this control when recording, the automation is recorded as well, so that you can create diversity with drum loops or rhythmic material, for example, and the enhancements that you make will show up when you export your track.  Of course, this has always been possible with "plan ol' Live" but now with TouchAble, it's a more fun and novel approach. 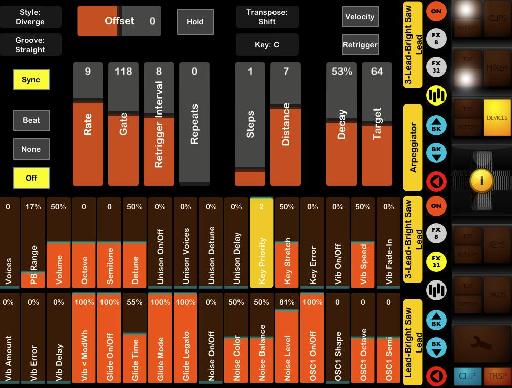 On the one hand, TouchAble's rendition of the Arpeggiator and Analog together (see Figure 3) makes it easy to manipulate the controls with your hands.  On the other hand, having Analog up on the computer screen (See Figure 4) is nice so that you can use the "info" view in Ableton to read up on what each control means to the sound that is produced.

The symbiosis of having an iPad running TouchAble alongside your computer screen's view of Ableton Live makes for a really great duality.  You can hone in on a control or set of controls that make sense to you for the particular musical application, using the more concise interface of TouchAble, or the fully featured set of controls in the native Live.

For example, in Analog, I found that using the Unison control in tandem with the arpeggiator's distance setting made for a sound that was really close to what I wanted.  Soon, I will narrow in on the sound to make it as close as I can to a perfect match according to what my mind hears (so to speak).   My niece visited me in the studio, and she said that "it sounds like a robot".  That's great news!   Next what I will do is EQ the Analog instrument to create a buzzier sound.

The killer feature of TouchAble is that it provides a "native view" of the device you are working with, represented by a special icon in the devices view, which intuitively matches Live's parameter layout.  For example, see Figure 5, showing the very familiar EQ Eight in TouchAble (the yellow and black circle to the right activates it).  Notice that it looks just like Live!  When clicking the native view icon on some of the other devices, TouchAble hints that more native views are on their way via updates.  Luckily, those already familiar with Live will recognize most of the controls immediately.  In addition, I love how the clip view of TouchAble shows you the clip names.  This is much more intuitive than a big flashing yellow pad indicating the currently playing clip on a Novation Launchpad, for example,  which seems to have become antiquated since TouchAble's release.

Having so many controls on an iPad make for an experience that is very close to operating a traditional, physical modular synthesizer with dozens upon dozens of knobs and controls.   Ironically, virtual instruments are modeling this sort of traditional, physical instrument more often than not, which spur us as musicians to enlist physical controls to exert articulation over the virtual instrument model to achieve a virtuoso performance.   With technology we try to achieve more with less, and TouchAble does a great job of calculating that difficult equation.

Get More for Less

TouchAble has quite a few great videos on their site of Artists using it.   In fact, the app was made by Artists and it really shows.   To summarize the features, TouchAble provides control using pages dedicated to mixing, clip launching, device control, a virtual keyboard, and virtual drum pads.  It also lets you access Ableton Live's metronome, overdub, quantize, and tempo nudge.  The best part about TouchAble is that it responds very quickly.  The fact that it is very inexpensive is just the icing on the cake.  Hardware controllers like the Akai APC-40 and Novation Launchpad are being given a run for their money with such innovative software being developed for under 1/10th of the price.   As musicians, we really are living in extraordinary times.

I highly recommend TouchAble if you are into Ableton Live and are using an iPad.  The iPhone version is coming soon, I hear, with a more simplified interface.   I have been so inspired with the ease-of-use of TouchAble that I can't wait to get back to my composition.  I remember being just as excited when Ableton Live 3 came out, when I realized that you could launch clips with Midi note messages!  I was using my Roland JP-8000 as a midi controller to launch recorded clips.  You see, some earlier hardware such as the JP had limited multi-timbrality, that is, you could only achieve 2 simultaneous voices.  This hardly satiated my desire for an expansive synth-symphony opus!  Fittingly, now with Ableton and TouchAble, you can easily stack layers of music as quickly as you can get your hands on different instruments in the studio, or in your plug-ins folder.

Be sure to watch the excellent tutorials for Ableton Live on www.macprovideo.com , this will definitely re-kindle your inspiration to compose music and to rest comfortably at night knowing that you are improving your skills as a composer and musician, all the while having only made a small financial investment into your studio setup to accomplish this.  Your next composition will be even easier to get your hands on with innovative new apps like TouchAble for use with Ableton Live.

I can't wait to hear your feedback on the forums or to read your replies below.   Happy composing!