Language
One of Ableton Live's most attractive features is Session View. Here's a quick way to make Logic Pro X behave in a similar way that'll change the way you arrange and produce tracks in Logic.

As a Logic user, one thing from Ableton Live that I admire is its vertical style sequencing method called Session View. Instead of always sequencing linearly/horizontally, you create vertical stacks that contain different elements from your song.

For example, one stack has the kick loop, the next has the kick loop and the bass, the next has kick, hats and snare, etc. The elements inside of these stacks can be played automatically in order, or triggered via MIDI (like keys on your controller for example). The audio loops/MIDI parts contained within can be of any length. The longest loop plays once, and any shorter ones “loop” repeatedly to fill in the space.

This concept was originally designed for live performance hence the name Ableton “Live.” Soon after, however, producers realized that this is method works great in the studio as well. In this article, I’ll show you a quick and simple way to add a touch of this style of arranging/producing to any of your existing linear sequenced Logic Pro songs.

Start by opening an existing song. This process works great on half-finished songs that many of us have cluttering their drives, and even better on ones with plenty of elements that need new/better arrangement. From the File menu choose “Alternatives” then “New Alternative.” You can name it at this point… I added “new arrangement” to the end. This way my original is perfectly preserved, so I can get crazy with this new alternative.

Define Various Sections of Your Song

Put a cycle around a 2-bar or 4-bar (or any size) song section. While clicked into the workspace, use key command Command-A to select all regions, then use Command-Control-Command-T to cut all regions (including loop aliases) all the way down between the locators. All the regions will become selected within the cycle area after this. 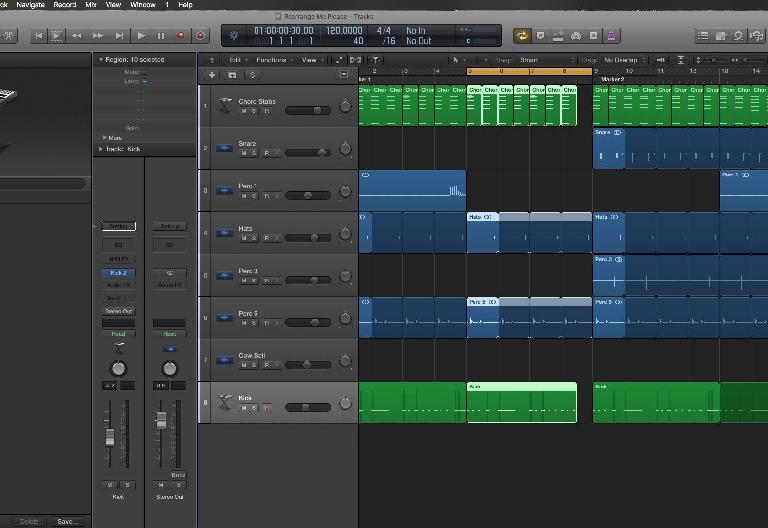 Place Elements Into a Folder

Now, right-click (Control-click) on any of the selected regions, and from the Folder menu (at the bottom of the menu) select “Pack Folder.” This places every selected region into a “folder.” In the image below, I’ve already placed many sections into folders, and I'm about to create another. 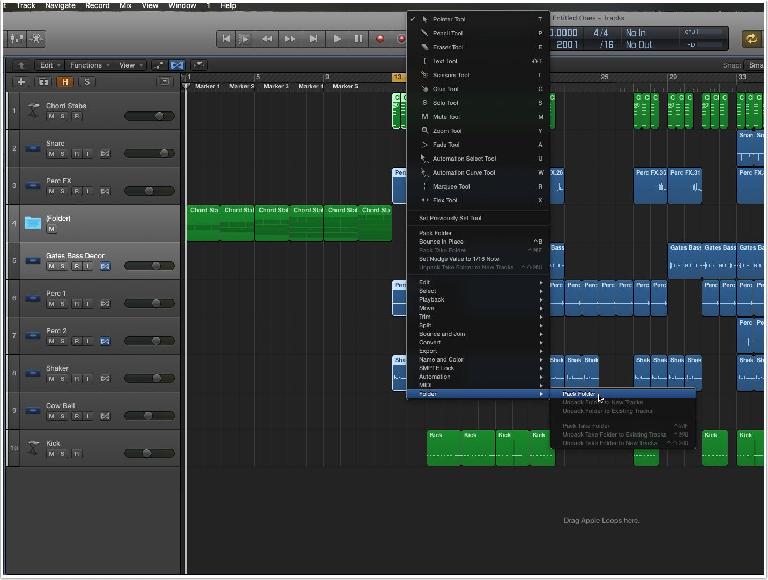 When you double-click on these folders, they open into a private workspace/arrange window containing only the regions you selected. Each region is displayed as usual on its corresponding track, but only those tracks are displayed. To toggle back to the main arrange/workspace window you simply double-click the background and you’re back. You can also use the arrow at the top left corner of the track list to get back to the main arrangement view. 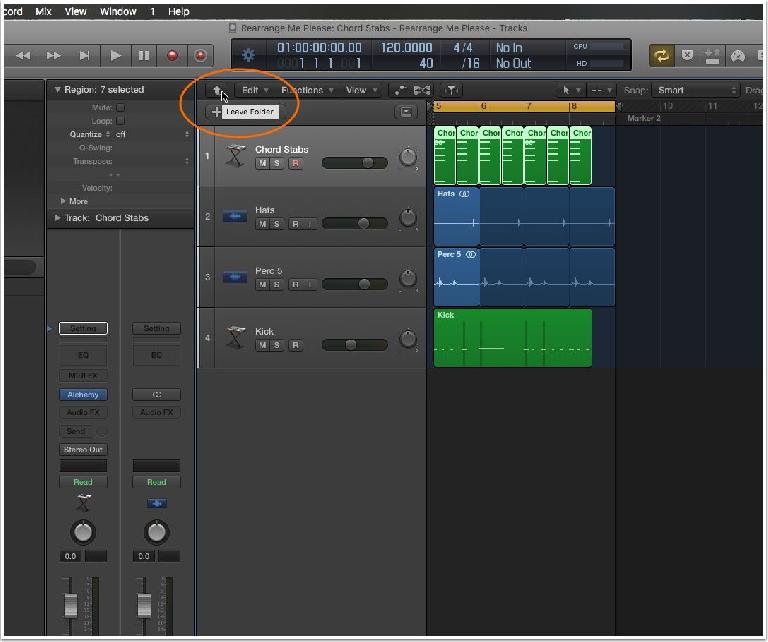 Repeat this process until all the areas of your song are contained inside folders. Be open to defining areas with 3—or fewer—sounds … these more sparse areas are great for post drop/chorus, beginnings, and ends.

Press T to open the tools menu and click on the naming tool. Click each folder with the naming tool, and give each one a meaningful name. This will help you distinguish the various sections when rearranging them. If it’s more about simply experimenting with new arrangements, simply select all folders and name one “song elements 1” (or whatever makes sense to you). By adding the number, all selected regions are numbered sequentially. 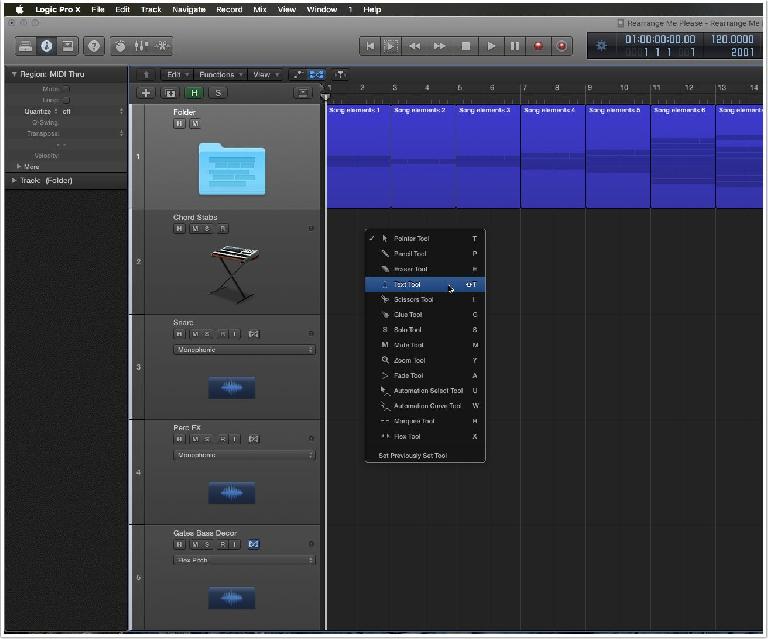 Press G to open Logic’s Global Tracks. When the global tracks open, you can right-click on them and choose which ones you want visible and which ones to hide. Show both the Arrangement and Marker tracks and hide all the rest. You can click on the horizontal lines dividing the global tracks to expand them. Doing this to the Arrangement track is recommended so it’s easier to grab/move the markers. When left small, and zoomed out too far, it’s easy to accidentally click the naming drop down at the center of each arrangement marker. 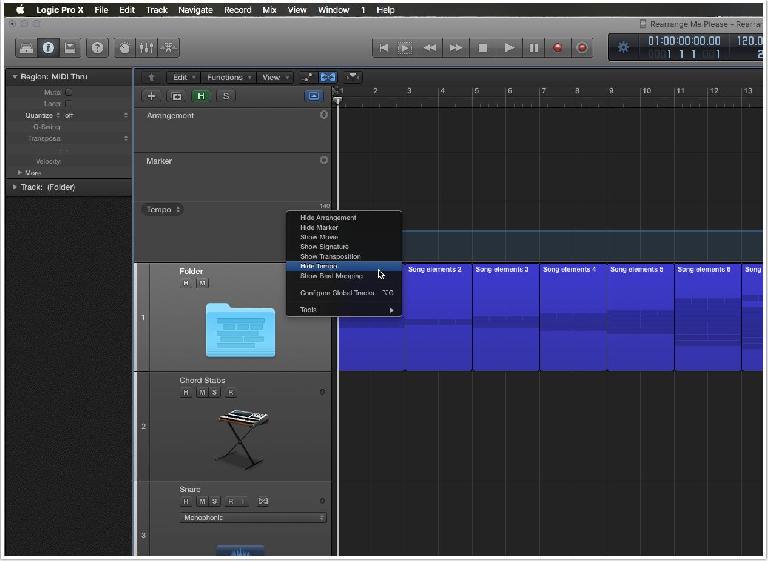 Create Both Markers and Arrangement Markers

Select all the folders you’ve created. Point to the word “Marker” on the Marker Global Track. You’ll notice that this is actually a drop-down menu. Click, and select “Create Markers From Regions.” All your named folders (regions) are used to create a matching marker set above. Now click the Marker menu again and select “Convert to Arrangement Markers.” At this point to keep things clear, right-click on the marker track and choose to hide it now so only the Arrangement Marker is displayed. 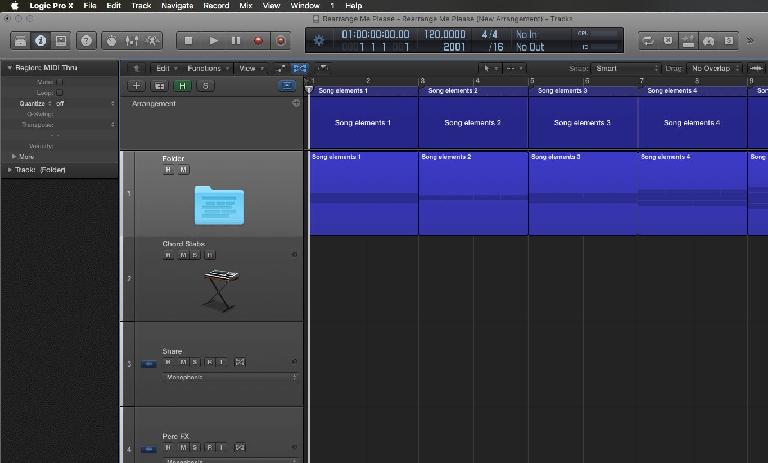 Rearrange Your Song With Arrangement Markers

That’s all the steps you need at this point. Now simply move the arrangement markers around in any order you wish and all the elements contained inside each folder are moved along with it. You move the arrangement markers like blocks in a row, if you grab one from the end, and place it in between some others, the one you are moving will be removed from its current location and relocated at the point you move it to. All objects to the right of the dragged region/folder are moved to the right. If you want to copy the section/arrangement marker, hold Option while dragging it (make sure not to release the option key until you’ve released the marker). 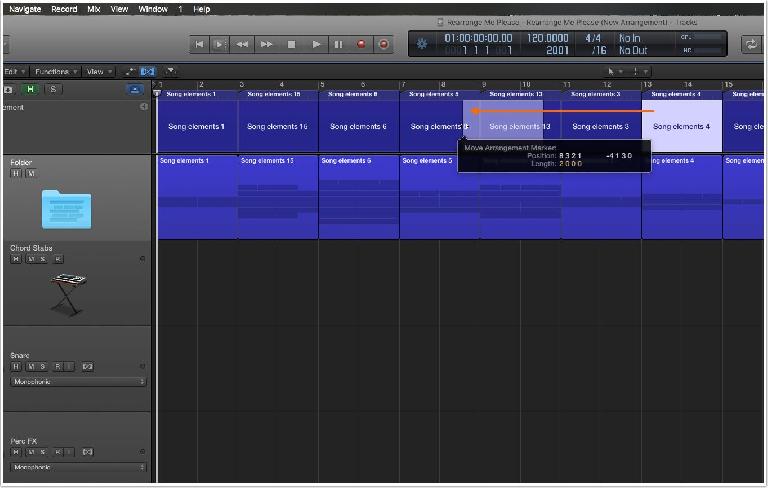 Inside each folder, you can do whatever you’d like… add loop elements from the Loop Browser, and even add new software instruments. Don’t change the length of the folder while you’re in it (even though you can)… the folders will overlap if you do. When back in the main view (looking at all folders) you can even add new stuff here that works as a “blanket” across all folders. Some people might wonder why I chose to pack the element inside the folders? I think it’s important to not see the elements unless you want to by double-clicking the folders. This way you try something new and unexpected. By putting them in folders you start to see your various elements as blocks that can be totally related to each other (or not at all) while arranging. If you want to repeat a section, put a cycle/locators around it and use key command: Control-Command-R. If you want to remove a section (again put a cycle around it) and use command: Control-Command-X. There’s a pretty good chance Live’s session view might be coming to Logic Pro in the near future… Garage Band on iPad has a new “Live Loops” functionality that works nearly the same way Live’s Session View works. Fingers crossed.

Hope this helps make arranging in Logic a little more lively ;). Feel free to ask questions regarding this in the comments.

Regards!
DarrenB
Hi gprok! Think -vertically- here ...everything in 1, 2, 4, etc part section of your song (including audio and MIDI regions) are placed into a folder. The folders containing all elements from the different sections of your song can then be re-arranged in any order. TIP: you really don't have to create the arrange markers to move them, but I though it was easier to move the folders this way.
gprok
Thanks, DarrenB, very useful information and the more I use it, the more I like it and it's very intuitive!

gprok
Lars
Very useful, thank you, Darren!
Question: What is the easiest way to change the length of the sections once I have defined them?