Guitarists & Producers: It's Not The Gear... But It Can Really, Really Help

The old moniker certain rings true about guitar sounds and music—it’s not the gear. But in my experience, the right choice of gear can really help the overall sound of your production. So I like to think of it as a fine balance—learn your skills so that you can make anything you touch sound good. Once you’ve gotten yourself to that point, start to investigate how to use good gear to take your guitar tones to the next level. Here are a few choice pieces from my gear closet I've turned to over the years to help my creative process.

Earthworks QTC 50—when it comes to acoustic guitar sounds, I happen to prefer to keep things natural. Sure, you could put up a Shure SM57 but remember that is a very colored mic—meaning what you hear in front is not what comes out of the speakers. In fact, most microphones are colored, which is why some sound better than others on guitars.

With acoustic guitar, I try to capture the essence of the sound of the instrument, and that’s why I like the Earthworks QTC 50. It’s an omnidirectional mic, meaning it records 360 degrees around the capsule. It’s also one of the most natural sounding mics I’ve ever come across. Simply place it in front of an acoustic guitar (or any acoustic instrument) and let it do its work. The fact that its omnidirectional means I don’t have to muss and fuss over exact positioning—just place it somewhere near the where the sound hole meets the neck and use your ears. It’s definitely on the pricey side but I consider it an investment in tone.

Shure SM 57—speaking of Shure SM57, there is no better bang for the buck than this mic. I literally carry them in my mobile rig bag for general purposes (not acoustic guitars) but especially use them on electric guitar amps. For under $100, you can't get a better value for something that can take a beating—both physically and with sound pressure levels of loud amps—and sound so good. Having said that, I do tend to combine the SM57 with a good ribbon mic to deliver bigger thicker guitar sounds.

Royer 121—definitely my favorite go-to ribbon mic tool. But also note that just about any good ribbon mic will help out an SM57 on an amp. The SM57 tends to focus on the midrange of the sound (the character of the mic) and a ribbon will cover more of the bottom and top. Ribbon mics tend to have a soft, warm character to them, and the Royer 121 adds weight to an amp sound. It also records in a figure-8 pattern, so the rear of the mic will add a touch of ambience to your sound.

Beyerdynamic M160—if I don’t use the above Royer 121, I will turn to my Beyer M160—another ‘mic closet staple’. The M160 is a bit different from the Royer in that it's not a figure-8 pattern (its hypercardioid), but still delivers the bottom end missing on an SM57. It’s also got a nice smooth high end (up to 20 kHz) that rolls off the top while still sounding crisp.

Fender Frontman 65R Amp—this is a perfect example of trial by fire. I was doing some shows down in the Caribbean and was forced to play through this amp. At first I was like, ‘oh no’ I’m in trouble here—a 65 Watt bad transistor amp? I was spoiled on having my good tube amps at home. 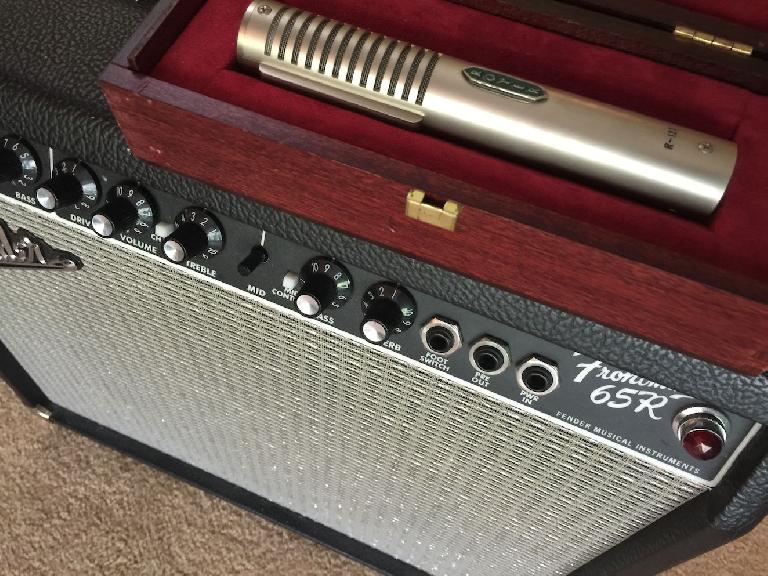 But as soon I turned it on and plugged in, I was like, ‘whoa’, I like this thing! It’s a bit quirky in that its bright, so I had to turn the treble way down, but it had a serious attack on the notes because it was a transistor amp. Turns out I liked it so much, I scoured online and found 2 of them that I take to rehearsals and sometimes even gig with—at a total cost of about $175 (for both!). Sometimes when you try new gear by accident (or because you’re forced to), it takes you places you might not have gone before. Plus I don’t mind throwing it in the back of my car (literally), because there’s no tubes to bust.

Elliot Elite Guitar—ok, I own a bunch of different capos. When you play TV music, you need to use every kind of tuning there is, and sometimes you’ll need a capo for a certain sound. Some of my capos I keep on my desk upside down to hold headphones (try it they work), but my Elliot Elite was an investment I made for acoustic guitars and banjos. 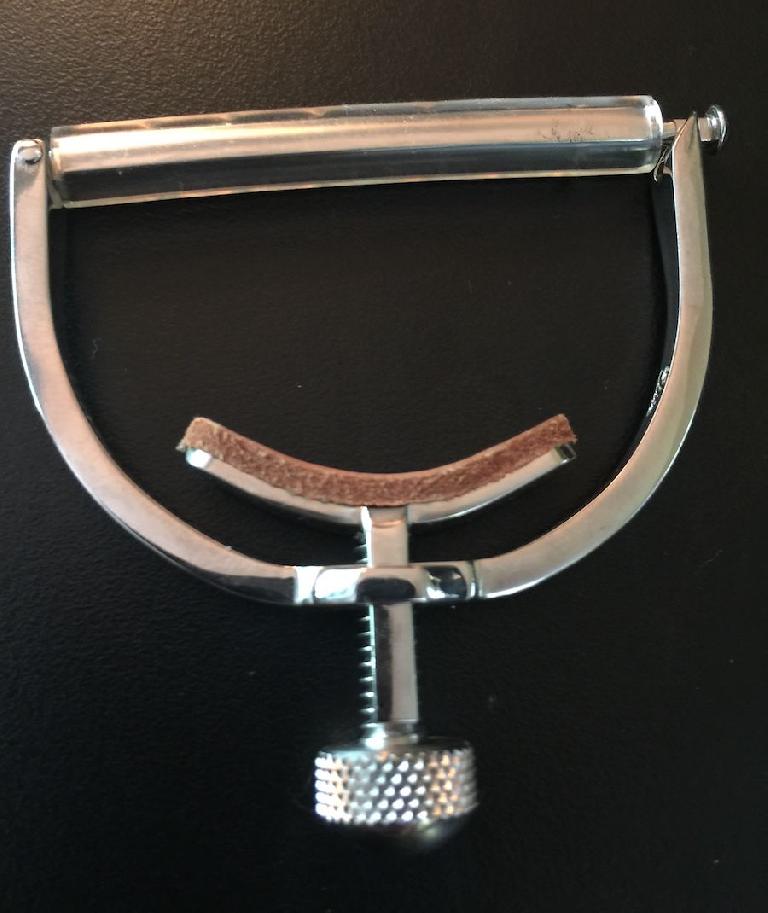 Never underestimate the power of a $150 capo.

I shocked myself by paying over $150 for a capo (really?, wait…seriously?) but I have to tell you, I’m glad I did. To me, it’s the BMW of capos and to my ear, retains the best guitar tone (I hear tone changes in cheap capos from string damping and bad rubber). It has a push button quick release top locking system and the saddle is padded with real leather. It delivers perfect alignment over the fretboard and you can even get your name engraved on it. I recommend not lending this to anyone, but if your names engraved on it, they’ll at least know it’s yours.

Creation Audio Labs Holy Fire—Overdrive Distortion Boost Pedal—here’s another example of just testing out something for fun that turned into years of tone. I was a big fan of Creation Audio Labs, a group of cool audio nuts in Nashville, USA who made pedals and studio tools. So I tried their Holy Fire pedal and was impressed with the Gain function (up to 12 dB of clean gain output) and how it made my amps sound. Interestingly, it doesn’t use tubes and in fact uses classic transistor technology with +48V of power. When you put this pedal in front of ANY tube amp, it pushes the input stage hard and makes a huge difference in tone and finger touch. It also features a Hi Cut filter knob that helps me smooth out the overall sound. I now have one in my studio pedal board and one in my live board and am amazed at how it can take a decent-sounding amp and turn it into a monster. 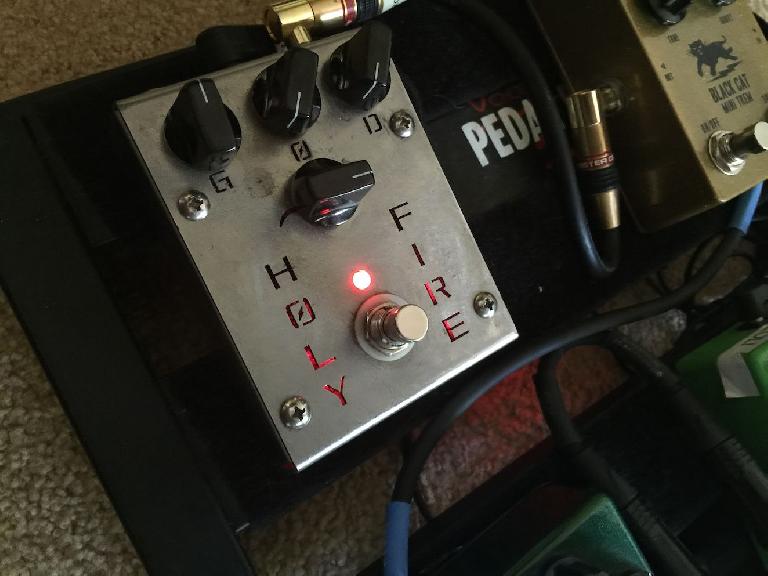 Tone is always controversial. What one persons opinion of what sounds good may sound terrible to another. That also goes for gear. Some of the most creative things I’ve done have been in enviroments I wasn’t used to working on gear I didn’t know well. Don’t worry about how much something costs—if it works for you it’s right. Finding what's right for you is had by trial, error and research from trusted friends and websites like this one.