If you've ever wanted to get into the world of Eurorack but not known where to begin, Sara Simms is here to share her own experience of diving in at the deep end, and what it taught her.

I've been curious about Eurorack synthesizer systems for many years, yet admittedly this idea has always seemed like an intimidating venture. During a trip to the Amsterdam Dance Event in 2017 I saw several Eurorack performances and discovered that a few of my favourite artists had begun to use modular setups in their studios and live shows. Once I returned home and gathered a little more information, I was ready to take the plunge into the world of Eurorack. 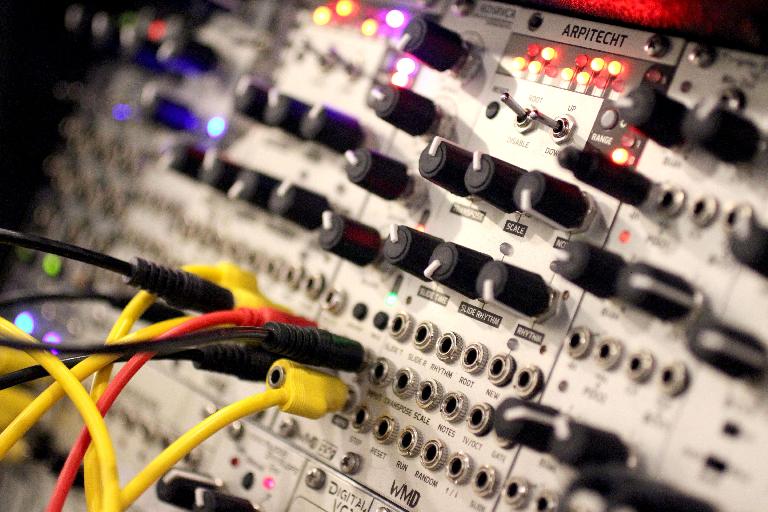 When getting started with Eurorack, the first thing that needs to to be decided is what the Eurorack system will be used for. Common options for Eurorack modular include: a monophonic synthesizer, a drum machine, an effects chain or a combination of a few of these. I wasn't completely sure about my system goals and decided to try out a few different modules and hope for the best. (In retrospect, this wasn't the right approach!) I ordered WMD's Arpitect, as I saw that one of my favourite artists had been using their modules. When the module arrived, I discovered that it needed a case and to be paired with several other modules. Oops. 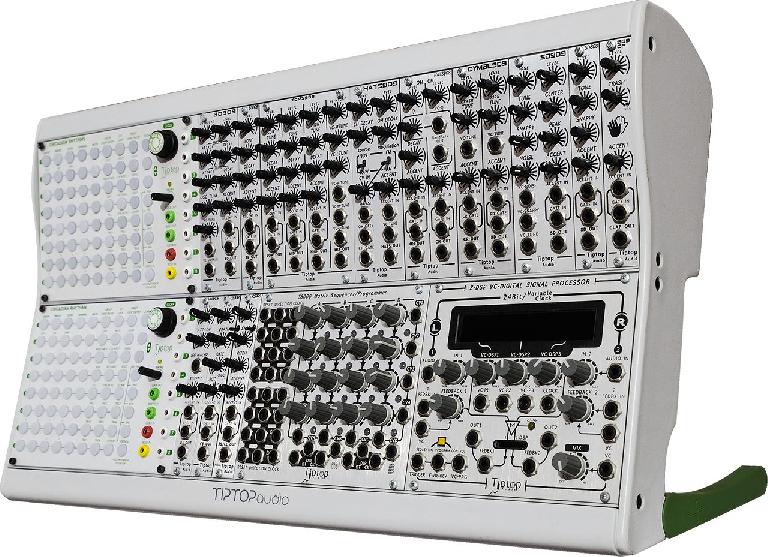 Not easily dismayed, I decided to find a case for my WMD module. I had been informed that one of the most important purchases for a modular system is the case and power supply. The top of the line cases seemed rather expensive, so I asked my good friend Rezfilter what kind of case he would recommend. He let me know one of his friends had recently purchased a case by TipTop Audio and was happy with it. I checked out the TipTop Audio cases online and before long TipTop Audio sent me a Mantis case and a few of their modules to try out. 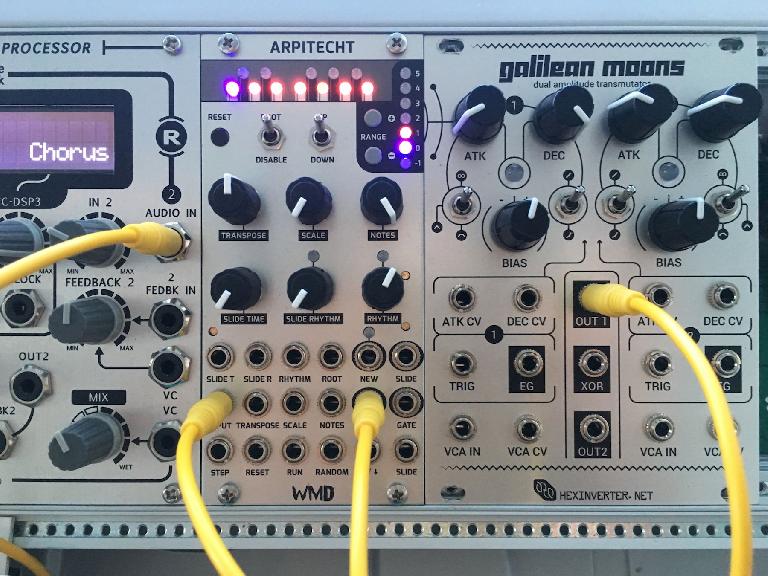 Thanks to a few YouTube videos, it was easy enough to assemble the modules into the TipTop Audio case. The modules fit perfectly into the Mantis case and the case is large enough to leave plenty of room for expansion. The first thing I wanted to do was try out my module by WMD, the Arpitect. This is a more advanced module that requires a sequencer and a clock. Although I didn't have any Eurorack modules for these functions, I was able to connect my Analogue Solutions Telemark and Oberkorn Sequencer to the Arpitect to learn how it worked.

At the time, there were only a few videos about this module online but WMD's owner was very helpful and assisted me to learn to use the Arpitect. Shortly after, a few more Arpitect videos were released by WMD, which helped me to better understand the unit. The Arpitect was an interesting place to start on my modular journey, and it taught me that the modular world could be a musical one and that modular sequences could be worked into my studio productions. 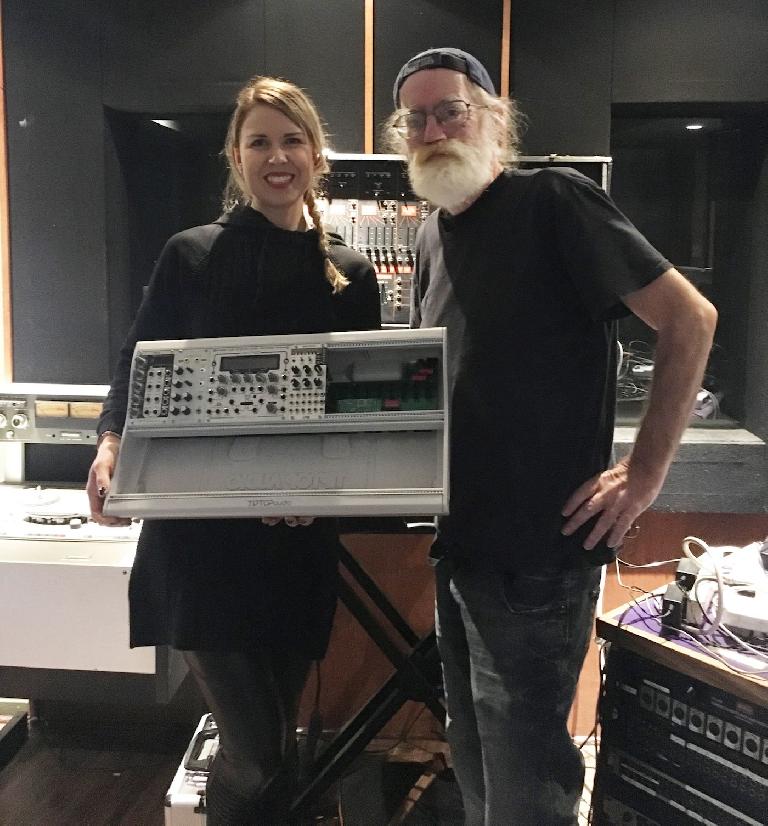 I was lucky to have a few modular gurus in my life who helped me on my journey to learn more about my Eurorack modules. These people are Rezfilter, a 'synth wizard' who produces videos for Analogue Solutions, Don Garbutt, my former synthesizer teacher from the Harris Institute and Vohs, a Toronto based producer and mastering engineer. Without guidance from these three, I would have been lost in a world of YouTube videos and patch cables. By spending time in sessions with these knowledgeable people and my Eurorack rig, I was able to learn directly from my mentors about the modular universe. 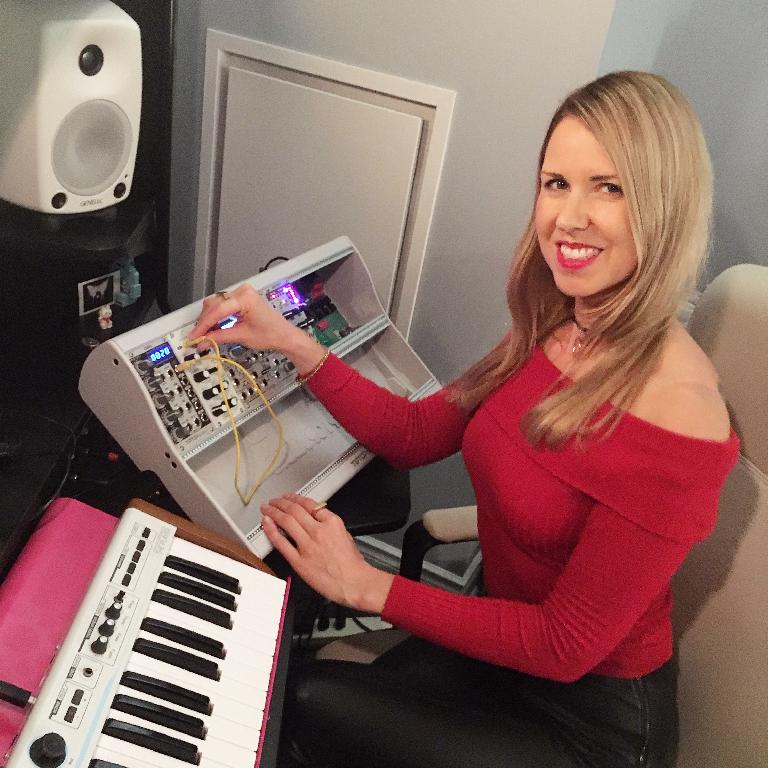 Without a real game plan for my modular system, I was happy to try out any modules that TipTop Audio lent me. I was sent the Z3000; a Smart VC-Oscillator, a Fold Processor and the Z-DSP VC-Digital Signal Processor. The Z3000 is an analog oscillator with four waveforms that allows for frequency modulation. It produces a clean signal and was easy to learn to make sounds with. However it became apparent that I would need a VCA (voltage controlled amplifier) to further manipulate the oscillator's waveforms. Next I tried the Fold Processor, a module that multiplies and divides waveforms to create a wide array of new sounds. This interesting module includes a CV Input with an attenuator, which makes it capable of producing waveforms that range from discordant swarms to sweet harmonic stacks. 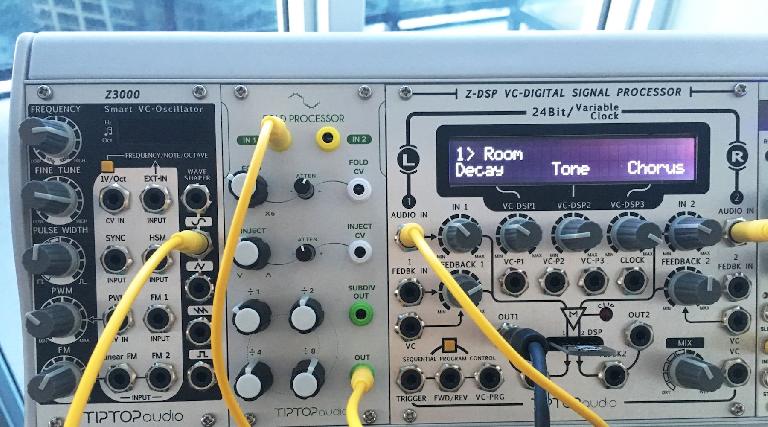 My favourite module by TipTop Audio is the Z-DSP VC-Digital Signal Processor, an open source digital sound processor that requires programmed cartridges. I tried processing sound with two cards; the 'Halls of Valhalla', a reverb cartridge and the 'Dragon Fly Delay'. To test out these modules, I invited over my good friend Vohs, and we had a great time routing my Telemark synth into the Z-DSP. Both the Valhalla Reverb and Dragonfly Delay are capable of producing amazing effects and I'd highly recommend this effects unit for Eurorack users. 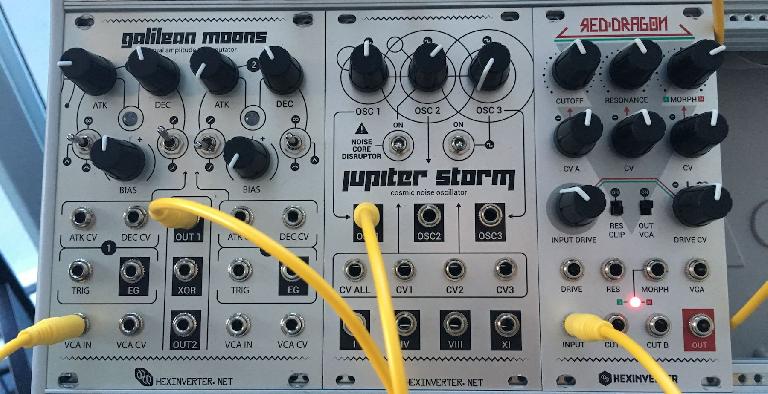 A Canadian company called Hexinverter was the last to send me modules. Don Garbutt had recommended I add a few VCAs to my system, so I tried out two Galilean Moons, a Jupiter Storm and Red Dragon delay with him in a session at the Harris Institute. The Galilean Moon modules are dual amplitude transmutators that change the amplitude of incoming signals through the use of voltage controlled envelopes and VCAs. The modules are designed to create voltage controlled percussive sounds when fed with a sound source and pair well with the Jupiter Storm module.

The Jupiter Storm is a 'cosmic noise oscillator' with a three square wave noise core capable of creating a vast array of noises. This module can be expanded with Galilean Moons to turn Jupiter Storm into a percussion and sound FX engine. My favourite Hexinverter module that I tested is the Red Dragon, a a 24dB/oct 4-pole low-pass filter with a unique control set made for modular synthesizers. Red Dragon features bipolar attenuators on its many CV inputs, filter morphing between 6dB and 24dB filter slopes, or the ability set it in-between and core overdrive. Its a versatile filter that sounds great and would work well in a variety of modular setups. 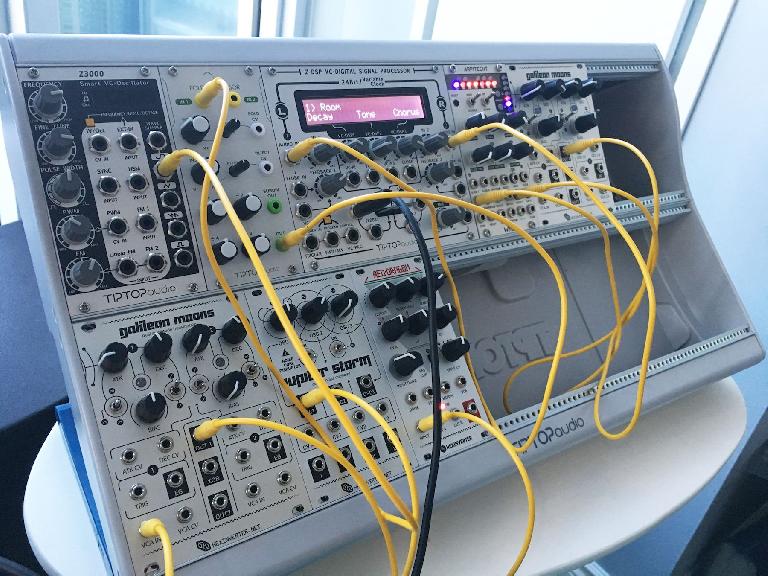 My first Eurorack experience was a positive journey that required a lot of research, guidance and trial and error. I'm happy to say that I gained a lot of new knowledge about modular synthesis by experimenting with the modules hands-on. Although information can be acquired by watching videos and reading online, there is nothing like the experience of trying out modules first hand and listening to the sounds they create. I was lucky that I had others who were kind enough to give me their time to explore the modules with me.

I would recommend to anyone starting out with modular to set a goal for their system first, and then purchase modules accordingly. (There's a great article on our site about Starting a Eurorack System). I think it's best to start with only a few modules at a time, as it's overwhelming to try to learn many modules at once. I would also encourage others to work alongside a friend or teacher who is knowledge about modular synthesis and can give valuable advice on how to patch modules together, what all of the features do and information about the quality of the units. A little help from someone wise will help you to discover the potential of the modules and give creative input on how to patch them together. For those who are curious about delving into Eurorack (and have the budget for it) I'd say do your research and go for it! Its an exciting adventure for those brave enough to do a little patching and noise making.

Learn more about my synth gurus:

Learn more about Eurorack and synthesis in the Ask.Audio Academy