Getting The Most Out Of Bitwig Studio's Built-In Effects

Matt Vanacoro set himself the challenge of using only Bitwig's bundled instruments and effects to produce a track. How did he get on? Read on to find out...

While Bitwig is now about halfway through its second version, it’s still the ‘new kid on the block’ when you compare it to DAWs with decades of development and pedigree. If I’m encountering a new DAW (or even if I’ve been ‘away’ from one for a while) I often find the best way to learn the character of the software is to write, record, and/or produce a track using only the included built-in effects. You can learn a lot about workflow that way, you can see what the software engineers deem as ‘front and center’ features, and you can really understand the ‘sound’ of a DAW a lot better. This month, I created a short segment using only instruments and effects that are included with Bitwig as of version 2.3, let’s take a listen and check it out.

I knew I was going to want to make use of Phase 4 after playing with it a lot at NAMM, so when I was laying down a drum track I thought it would be a good idea to go with something electronic. Bitwig’s included drum machine is called…. Drum Machine. Points for clarity, I guess!

Drum Machine has a few built in effects that you can access without having to add any other devices, so I laid down a quick pattern and gave it a bit of built in delay. I was happy enough with the sound as a starting point, but I wanted to mod it up a bit, and it also sounded kind of ‘small’ without any ambiance.

Bitwig’s Flanger effect is dead simple, with an LFO/Frequency control, Time and Feedback all front and center. After dialing in a slower rotating flange, I tweaked the width to make it span the sound field a bit more and then adjusted the Mix knob to make it fairly wet. If you’re gonna do it, go all in, I suppose! Bitwig’s Reverb effect helped to add the ‘bigness’ I was looking for and make the loop sound a bit more ‘stadium’.

I had an idea for a bass line, so I grabbed my trusty Fender P-bass. I didn’t want to go the easy route (at least for a keyboardist like myself) and use a synth bass because I wanted to really see what Bitwig could do for a traditional bass guitar. Bass guitar can often be the ‘forgotten stepchild’ of a DAW and the offerings can sometimes be less than stellar.

I played in a simple descending line and began to get to work. First up, I added the Amp plugin. This plugin has settings for both guitar and bass. I wanted the bass to sound like it was going through an amp, but this was also going to be an electric track so I really wanted it to have some drive and edge. I loaded up a bass preset with bass amp simulation, then adjusted the drive knob to give it some more grit. Tweaking the amp’s ‘bias’ simulation can also make the amp sim feel like it’s running hotter, so that helped to make the bass sound less jazzy and more razzy (sorry, a little dad humor snuck in there). I used the reverb plugin once again, this time with a smaller room size and less in the mix just to give it some ambiance. I find that helps to make the simulated amp sound more convincing.

Now we get to the reason Bitwig caught my attention in the first place - Phase 4. This is a phase distortion synthesizer that can dial in some incredibly unique sounds. I was looking for something rhythmic to counteract the simple descending bass line, so I played in a single octave line.

It worked, but with all the ambiance of the drums and bass already dialed in, it sounded too ‘up front’. I dropped in Delay-2 as I wanted a simple stereo delay but didn’t need endless repeats, and I brought the Reverb plugin into play. With all of this, I thought it would be cool to glitch it out a bit, so I put Bit-8 on a send and routed the synth to it a little bit. Bit-8 is a bit crusher effect, and it gave my synth track a pleasing amount of glitch.

I had 2 ideas for guitars when I started this track. I knew I’d want one to be high and ‘echo-ey’ to compliment the Phase 4 track I was laying down. I also thought the track needed a bit more power, so I’d want to double the bass line with a really growly distorted guitar. Here is a quick sample of my guitar sound, clean, right into Bitwig with no effects.

Ok, pretty wimpy (and mediocre playing, but that’s another issue) but what I expected for a direct guitar. I was excited to see what I could come up with in Bitwig without going to my mainstay amp sims. For the higher part, I put on a cleaner amp sound, used Delay 4, a big reverb, and routed it to some Bit 8. For the Delay 4 plugin, I wanted to see what Bitwig had outside the traditional tape delay, so I called up the Ghost Delay preset. I’m happy I did, the result was creepy and ethereal!

It seemed like a perfect combo, as the delay and glitchiness covered up some of the inconsistency in the picking. For the lower, powerful guitar part, I called up a very distorted preset and threw in some big-metallic sounding reverb. I should note that Bitwig somewhat eschews the traditional ‘make cool graphical mock ups of guitar pedals’ in the amp sim. There’s only one amp sim plug, it’s just called ‘Amp’, but it is incredibly diverse in its preset offerings. It can pull off clean as well as distorted quite effectively, you’ve just got to load up the right preset. 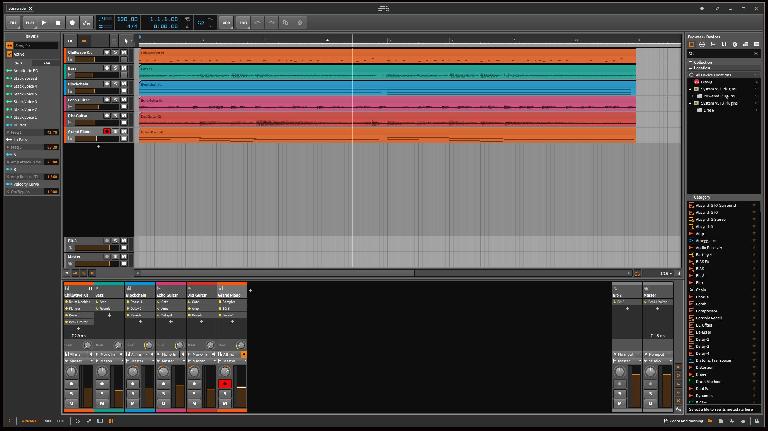 By this time I was pretty happy with the results I was getting. I thought one more doubling on the descending riff would be cool, so I called up a piano preset from the sampler instrument. The piano served quite well enough. It doesn’t have the features of a dedicated piano instrument for sure, but this track clearly wasn’t going to be a Beethoven sonata, and I knew I would glitch up the piano a bit anyway. I used delay 1 to get a simple slap back type echo in there, and used EQ-5 to shape 5 different bands of EQ and make the piano cut through the mix a little better.

Piano with EQ and delay

I used Bitwig’s built in Peak Limiter plugin on the main bus to bring the volume of the whole track up a bit without putting myself ‘in the red’, and chalked up the time spent to a wonderful learning experience and a great way to become more familiar with what Bitwig has to offer!