Get Creative With Drummer Regions In Logic Pro X

Harness the power of Logic Pro's Drummer to really take control of your beats, percussion parts and arrangements. Jay Asher is here to show you how it works.

When Logic Pro X first introduced “Drummer” it was truly a revolutionary feature. Now, with or without any knowledge of what a real drummer plays, the user could create and then customize an entire drum arrangement of a song in many genres. They even added percussionists. Drummer regions could also be converted to MIDI regions and edited in more detail and then played back not only by a Logic drummer but on third party drum libraries. Further, Drum Machine Designer gussied up Logic’s Ultrabeat to help with creating stunning drum machine parts.

And now in the Apple Loops you have drummer regions that do not necessitate using the Arrangement Global Track to create entire song drum arrangements. I am going to work with those to explore some creative options. In the recently released 10.4.5 update, you now can filter out everything but Drummer Loops in the Loop Browser, which is very helpful for our purpose here. I then can choose a genre and for this article I am going to start with Modern R&B and an intro performed by Rose. All I have created in this new song is an empty Software Instrument Channel Strip, but when I drag the loop into the Workspace it creates a Drummer  Channel Strip for me and changes the tempo to the original loop tempo of 75 BPM. 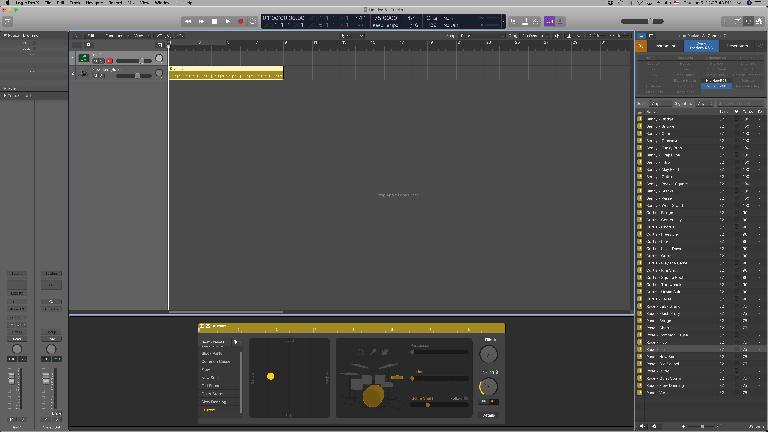 I listen to it and it sounds really good, but I audition some alternative patterns for the Hi-Hat and Kick & Snare, and I drag the puck up to make it a bit louder and more complex and now I like it even more. The region is 8 measures long, but I resize it to 4. Finally I change the tempo to make it a little brighter, 82 BPM,  and now my drum arrangement is off to a good start.

I see a Drummer Loop from Rose for the Verse, but after comparing them, I kinda dig what Curtis is doing with Play The Game loop for the verse, so I want to drag that to the same track. But Rose is playing the “Slow Jam Kit.” If I drag a Curtis part in, will that kit selection change?

No it won’t and because it won’t, Logic warns me that it may not sound the same.

And sure enough, it does sound quite different as they are playing different kits, but I don’t care because I dig the part and anyway, I may change the kit later. Continuing on, I decide to go back to Rose for the chorus with her Flow loop; I then copy the verse, but this time make it louder and more complex; copy the chorus; go back to Curtis for a bridge loop; copy the chorus twice; then finally I return to Rose for the Outro, twice. Now I have the whole arrangement!

I love the parts, but I am not so thrilled with the kit sound. After auditioning a bunch of Producer Kits (which is what I would want even if I stuck with the Slow Jam Kit because it gives me so much more control) I go with the Studio R & B kit and send it to a bus with little Drum Chamber reverb setting in ChromaVerb and a Console EQ  and now I am digging the sound as well as what the players have played.

But I wonder what it would sound like with a third party kit? First thing I do is create a Project Alternative so I can quickly get back to this version. I then select all the Drummer regions and with the Control key depressed, convert them to MIDI regions. I create a Software Instrument Channel Strip and try it with some a third party kits. A lot of them sound great and really different.

Many of you may have third party kits you like, but I am going to go back to the first Project Alternative, in case you don’t. I think I would like to add some percussion to this. I click the X to reset the Loop Browser and choose Percussion as the instrument, while leaving the selected genres intact and the Loop Browser only showing me Drummer loops.

Oh wow, there’s this Finn dude whose Cold Brew part will work great with the verses!  So I drag the loop to each verse.  Finn plays a “Coffee Shop” percussion kit, but it is only stereo so I again use the Library to switch to a Producer Kit version that gives me more control. Isabella is a Latin player and Quincy a more traditional percussionist and they are terrific, but I am riding with my man Finn and his Boardwalk loop for the choruses and Rockwood with some different variations for the bridge.

When I add the Finn loops, another send is created sending to  another bus with a different reverb and EQ, so I delete those and send to the same FX Bus as the main drums to glue the sound together.

Cool!  Now I think further outside the box (Box? Box? I don’t see a box, do you see a box?)  and decide to add some drum, machine type parts to the intro and outro. I sort by tempo, but none of the ones around my tempo are working for me. But  finally I find an intro that was originally at 120 played by Duncan that works surprisingly well for the intro.  I bring it into the Workspace and it creates a Drum Machine Designer instance playing “Silverlake.” His Outro works well for me also, with some variation  changes. Again, I send to the same bus.

Now I just go to the Stereo Output to choose a Mastering preset, in this example, Hyped Mix and here is my drum arrangement, more creatively arrived at than loading a Drummer and populating it with regions from that same drummer. You be the judge!

Learn everything you need to know about Logic Pro X: https://ask.audio/academy?nleloc=category/audio/application/logic