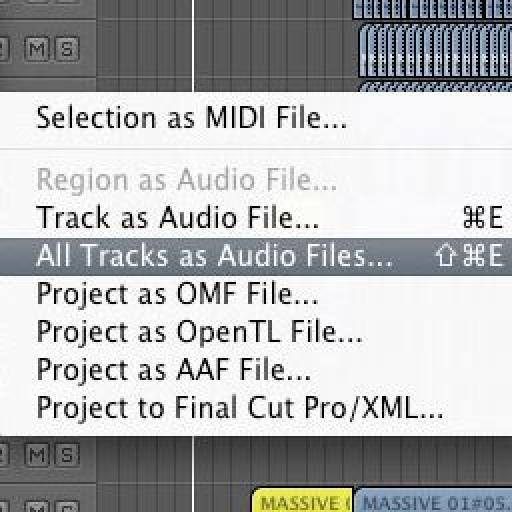 Language
Software versions are constantly changing so how you can be sure your current projects can be accessed in 10 years? Gary Hiebner looks to the future with these tips on archiving audio projects.

I am a devoted Logic and Ableton user, and have racked up quite a collection of finished and unfinished projects with both applications as we probably all have. But there is a reality when it comes to software: the software we use today may not be around in the future. So what is the best way to future-proof your audio projects? If you have a dash of nostalgia and wish to work on a song that has been laying around, but the particular software you used has been discontinued, or no longer works with the future operating systems, what do you do? Here are a few precautionary steps to take just in case the above scenario does happen.

When it comes to audio software and backing up or archiving, your best bet is audio files and MIDI.

Audio file formats (the most common being WAV and AIFF) have been in place since the early 1990s. There may be different incarnations of audio file formats in the future, but WAV and AIFF are the standard formats. Get in the habit of bouncing/exporting each audio file in your project with its respective plugins and send channels enabled, for backup/archiving purposes. You never know when you might need that file. Your DAW of choice or that favorite plugin might not be in production in 10 years when you have your nostalgic moment for that one song of yours. It might be a chore to export out each audio track. But wait, you'll thank me in the future when you can't remember what that bassline sounded like.

You can export all your tracks in Logic from File > Export > All Tracks as Audio Files... (Shift-Command-E). 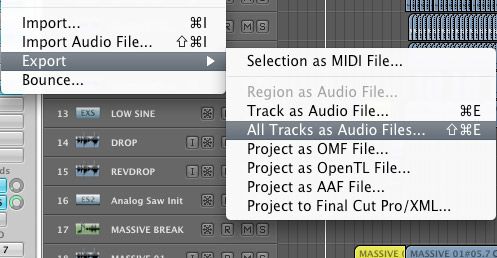 In Ableton choose File > Export Audio/Video. Under Rendered Track you can choose All Tracks. 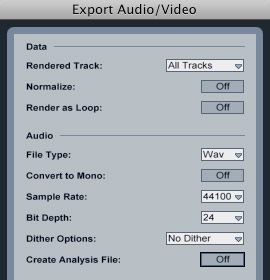 MIDI has been around since the 1970s. So it is safe to say that it will be around for a while longer. I would recommend exporting your MIDI files for all the relevant tracks in your project to a MIDI folder. This will allow you to import your MIDI files into future projects and assign them to other software instruments if you wish.

In Logic select the MIDI region you wish to export, then go to File > Export > Selection as MIDI File.

In Ableton, right-click the MIDI file you wish to export and choose Export MIDI Clip (Shift-Command-E). 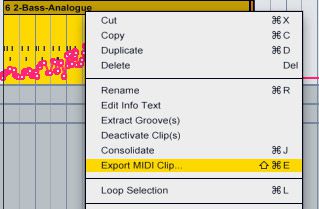 Also get into good naming convention methods with your audio and MIDI files. Be quite precise so that if you look at the filename in a few years you will know what it means. For example if you recorded a Sawtooth Bass sound, call it sawtooth bass.wav or sawtooth bass.mid, instead of just bass.wav or bass.mid, which is a bit vague.

Software plugin and instrument developers often upgrade and change their software applications. For example if you had a project that used Absynth 3 on your old Apple G5, but now have an Intel iMac with Absynth 5. You will have to open the old project, and replace the Absynth 3 (which is not compatible with the Intel chips in newer Macs) with Absynth 5. This brings me to my next point.

You can also make screenshots of all your synths in the project so you have an idea of their settings. For example, if you made screenshots of Absynth 3, you can transfer those settings across to Absynth 5. Or you can save presets of the plugin as well. A preset of Absynth 3 will open in Absynth 5.

Also date your filenames accordingly so that you know which one was the last project or file that you used. Take a look at my article on file management and file naming conventions to get a better idea.

You could also write up a brief text document which will includes details on each channel strip (plugins included on channel strip and settings), and volume, pan, reverb, and automation details.

Here you can see I have created folders for my Audio files backups, my MIDI backups, Screenshots of my plugins and software instruments, and a Text Document folder which contains the detailing my audio channels strip volume, pan and send settings.

It's not nice to think that the software we use today may not be available tomorrow. But we owe it to ourselves to take the best measures available to protect our audio creations so that if we wish to open a project down the line, we are able to do it with what tools we are using in the future. I hope this article helps you to take good measures to full-proof backup your audio projects.

Chris Polus
Fortunately you can open a project in Logic 9 that used an old Absynth 3 plugin. The plugin settings and everything will be preserved, but no sound will be played. The instrument plugin is crossed out. This is so great as one can exchange projects with colleagues that have other plugins and no setting from their other plugins is lost.

You really have to be organised and write this stuff down to the track notes. But people are lazy and I for example tend to change instruments at a later stage all the time until I get the right sound. So I would have to update the track notes constantly, losing the creative flow. It would be nice if Logic would have a rudimentary "auto document" feature where it would just dump down plugin settings in clear text so you could at least try to make sense of it and read the "preset" that was used.

Gary Hiebner
Great idea Chris. It would be insane if Logic would implement something like this where dump down plugin settings.

But until then, make sure you always have a bounced down audio version of your software instruments just in case of situations just like this where an older plugin does not load.

Nice article, but you should add one thing:
After you do all that backup, copy it to _another_ disk, preferable a portable one. Then store that disk somewhere offsite.