Language
The unique Circle from Future Audio Workshop was a hugely popular software synth, and now CircleÂ² (or Circle 2) is here with a focus on usability, flow and experimentation.

Whether you are designing experimental sounds, producing music in a future-leaning genre or looking for a modern digital synthesizer to complement your existing setup, Circle² enables you to communicate your musical ideas effortless by placing flow and intuitiveness at the core of the music making process.

Designed and programmed in the heart of Berlin, the world's capital of innovative music technology.

 Circle² is the new major update to Future Audio Workshop's flagship software synthesizer, Circle. Since its release in 2009, Circle has achieved cult status, becoming a key tool in the arsenal of both seminal underground and pop hitmakers such as Hudson Mohawke, Arca, David Guetta and Deadmau5. The 2015 update incorporates several new features, modules and effects, extending the spectrum of sounds that can be composed. Circle² also features a completely redesigned user interface, providing a forward-thinking interpretation of Circle's esteemed user-centred design approach.

Usability is at the heart of the design of Circle². With the affordance of the power of modern computer processors, many software synthesizers have become progressively more complex and difficult to use. The aim of Circle is to step aside from this path, and to instead focus on placing flow and intuitiveness at the core of the music making process. Rather than burying a deluge of synthesis parameters in submenus and external windows, Circle² encourages experimentation by presenting parameters in an accessible and intuitive manner. The unique Circle² interface enables a level of experimentation that would be unachievable via a more typical, convoluted interface; allowing the user to focus on creativity rather than technicalities. This design philosophy sets Circle² apart in the synthesizer landscape and provides the foundation for the development of the next generation.

Instead of designing Circle² to graphically replicate its analog predecessors, Future Audio Workshop have been working alongside Berlin-based designer Lars Hammerschmidt to bring Circle² firmly into the 21st century through the use of a contemporary design language that looks more to the future than the past. The goal was to construct an even flatter design with brighter, more distinct colors than was seen in Circle. 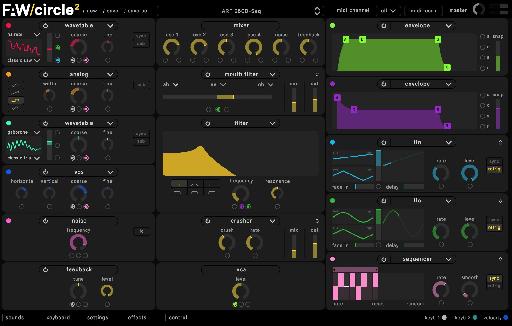 Based on state-of-the-art digital synthesis research, the brand new VPS (vector phaseshaping synthesis) oscillator is one of the most exciting new features of Circle². The new oscillator utilizes a cutting-edge synthesis technique introduced by researchers at the Aalto University School of Electrical Engineering and The National University of Ireland, and further developed for its implementation in Circle² via an academic collaboration with Future Audio Workshop.

 The VPS oscillator works by glueing together a pair of sine waves with specified frequencies. Via its two parameters - which control the frequencies of the sine waves and the location at which they are glued - the VPS oscillator provides direct control of the waveform's intricate harmonics. Experimentation throughout the oscillator development process has led to a range of results; from dirty Reese style bass patches to ethereal pads and gritty lead lines. Modulating the parameters can produce a wide range of effects, either used subtly to give gentle movement, or used harshly to twist and contort a synth into oblivion. We're excited to hear what synthesis results users can achieve using the new oscillator.