Today more than ever, musicians and producers are travelling for work and creating projects in many different cities. The demands of travel mean that your musical tools need to be portable and lightweight, yet still capable of producing good quality sound.

If you're making music on the road, a portable audio interface is essential for recording, mixing and referencing tracks. Here's a list of four of the best road-worthy audio interfaces on the market today.

The Scarlett 2i2 is a great choice for producers who are going to be recording vocals and instrumentation. Focusrite has built its reputation on producing some of the best mic preamps in the world and the Scarlett 2i2 features these. The Scarlett 2i2 captures audio with precision and clarity, with 24-bit resolution and sample rates up to 96 kHz.

The interface is housed in an attractive red anodized aluminum unibody chassis, which adds a nice touch of color to studio settings. At only 1.3 lbs, it's very lightweight and portable and easily fits into laptop or DJ bags for travelling. The Scarlett 2i2 is bus-powered by a single USB cable and does not require an additional power supply. This makes it easy to setup and quickly get down to work.

There's a couple of added bonuses included with the Scarlett 2i2 as well. It includes Ableton Live Lite 8 and Focusrite's Scarlett plug-in suite. The plug in suite consists of EQ, compression, gate and reverb, which are all great tools for track creation and mixing.

On the front panel, you'll find 2 line/mic/instrument combination inputs, which are XLR/1/4' TRS inputs and two line/instrument switches. For each input, there's a light around the gain knobs called the 'gain halos'. These turn green when the signal you're recording is at a good level (above -24 dBFS) and will turn red if the signal is too loud.

There's also a Direct Monitor function, which allows you to hear what you're recording directly through your speakers or headphones without any latency. Best of all, Scarlett 2i2 is compatible with Mac OSX 10.7 Lion. 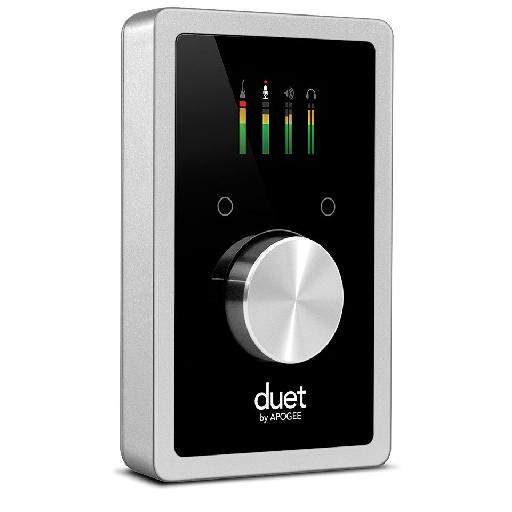 One of the smallest audio interfaces available, the Apogee Duet 2 was designed to travel. The new Duet 2 is housed in a slick black and aluminum chassis and is small enough to fit in the side pocket of your gig bag. The Duet 2 is equipped with the high-end D/A and A/D converters that Apogee is known for. It also features two analog inputs with world-class mic preamps with 48V phantom power, 2 analog line outputs and a 1/4' stereo headphone output. It can easily be connected to your iPad or Mac using a USB cable.

The Duet 2 has great sound quality, basic inputs and outputs and a minimalist modern design. In many circumstances, that's all you'll need to get the job done.

The MADIfaceXT is the world's first USB3 audio interface, and the smallest portable interface that provides access to hundreds of audio channels. For those not familiar with the term MADI, MADI stands for Multichannel Audio Digital Interface and is an Audio Engineering Society (AES) standard electronic communications protocol that defines the data format and electrical characteristics of an interface that carries multiple channels of digital audio. A flexible and advanced interface, its can also be used with USB 2.0, connect to External PCI Express cards and can adapt to Thunderbolt.

The MADIface is capable of transferring digital audio data directly into a computer from any device equipped with a MADI interface. On the front panel, there are two stereo analog mic/line preamps with 48V phantom power and a stereo headphone output. There's a display screen on the front of the interface that shows the current state of the interface mode, and and the states of digital input. The MADIface can process sample rates from 32 kHz up to 192 kHz and comes equipped with RME's detailed D/A and A/D converters.

On the rear panel are all the outputs you'll ever need, including: two analog XLR outputs, word clock I/O, standard coaxial MADI ports, 2 x standard optical MADI ports, a connector for the optional remote control, MIDI I/O and AES/EBU I/O, USB 3.0, PCI Express and a socket for power connection. The MADIface really does have it all, at least when it comes to options for connectivity.

The MADIface also includes a powerful digital real-time mixer, based on RME's unique sample rate total mix technology. This digital mixer allows for creative mixing and routing options to any hardware outputs. The MADIface is a powerful interface that's portable and well suited for producers who may be interested in upgrading to MADI in the years to come. 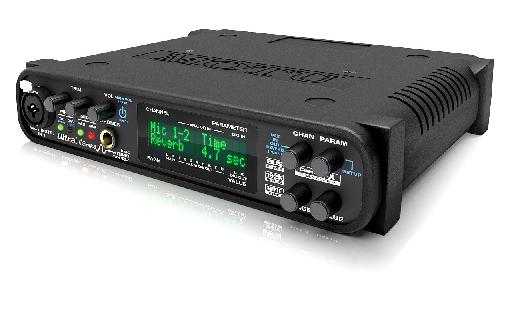 The MOTU UltraLite MK3 Hybrid is a compact and versatile audio interface, well suited for studio or stage and for use with or without a computer. It features flexible hybrid operation via FireWire or USB2 connectivity to your Mac or PC computer. The UltraLite MK3 Hybrid captures professional audio quality at sample rates up to 192 kHZ. Housed in a rugged compact enclosure that is perfect for travelling, it features two mic/instrument inputs, six line-level analog inputs, ten channels of analog output, stereo S/PDIF and a stereo headphone output. As an interface or standalone mixer, the UltraLite-mk3 Hybrid provides a total of 10 separate inputs and 14 separate outputs.

UltraLite MK3 comes with an onboard CueMix FX digital mixer, which allows you to connect your instruments and record, monitor, route and process them with no latency. There's also hardware DSP-driven effects included, such as reverb, EQ, and compression that you can apply in the mixer that don't apply any processing strain to your computer. If you're looking for a modern, flexible solution for recording and mixing whilst on the road or on the stage, the UltraLite could be a good choice for you to consider.

KoisanX
Please mention something about the actual performance with Win8.1. I've noticed that some brands have more stable drivers than others e.g. RME