The RedNet 1 bundle, also known as the RedNet Native 8x8 Analog I/O System, is the easiest way for users to add world-class conversion to their DAW, whether they use Cubase, Nuendo, Logic or Pro Tools software, for Mac or PC. Featuring a Sonnet Thunderbolt Chasis and Cisco Ethernet switch, this package includes everything you need to get started. Just add computer and DAW software.

With dynamic range of 119dB and incredibly low distortion, RedNet converters deliver pristine results every time whether tracking or mixing. RedNet PCIe provides true analog-round-trip latency of just 2.0ms at 96kHz, allowing cue-mixes to be set up in the DAW software rather than a separate cue mix application. 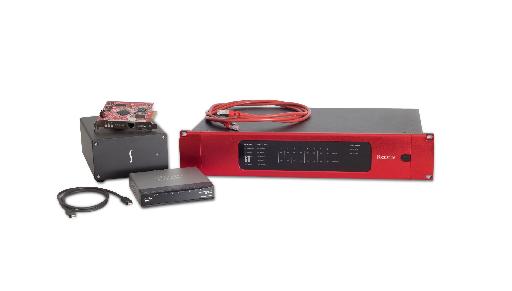 It's important that you make an investment that can grow with your studio. Once connected with RedNet 1, RedNet PCIe and your computer, the Ethernet switch will have five spare ports, allowing additional I/O to be added in future. When more I/O is needed, the extra interface is simply plugged in with a single Cat 6 cable, allowing the full 128 I/O channel count of RedNet PCIe to be realized. Alternatively, add additional computers with Dante Virtual Soundcard or additional RedNet PCIe interfaces, allowing a multi-DAW studio to be created.

Finally, the included Sonnet Echo Express SE I Thunderbolt chassis allows you to use RedNet PCIe with any Thunderbolt-equipped Mac. Just insert the card, plug-in to your computer and build your own Dante network equipped production environment.

The RedNet 2 bundle, also known as the RedNet Native 16x16 Analog I/O System, has all the same benefits as the RedNet 1 bundle with an additional eight channels.