Flexible Pitch and Time in Kontakt

Language
Follow along with David Earl, aka. sflogicninja, as he takes you through a step-by-step exploration of Kontakt's flexible pitch and time features.

I'm going to have to abstain from gushing about all of the wondrous things we can get out of Kontakt, and focus on just one tiny aspect of Kontakt's immense sampling system: Time and Pitch.

We are going to import a sample into Kontakt, then experiment with altering the sample's pitch independent of time. We are also going to export MIDI regions to a DAW of our choice, (in this case Logic), and play the individual slices of a sample loop.

Step 1 - Importing a Sample into Kontakt

I converted this file from CAF to WAV using Quicktime. We can also convert the file type in Logic. Kontakt loves WAV and AIFF files. CAF? Not so much. Step 2 - Getting into the Wave Editor

To access pitch and time variables for this sample, we need to first open the Edit Mode to the left of our newly created instrument. After that, select the Wave Editor. 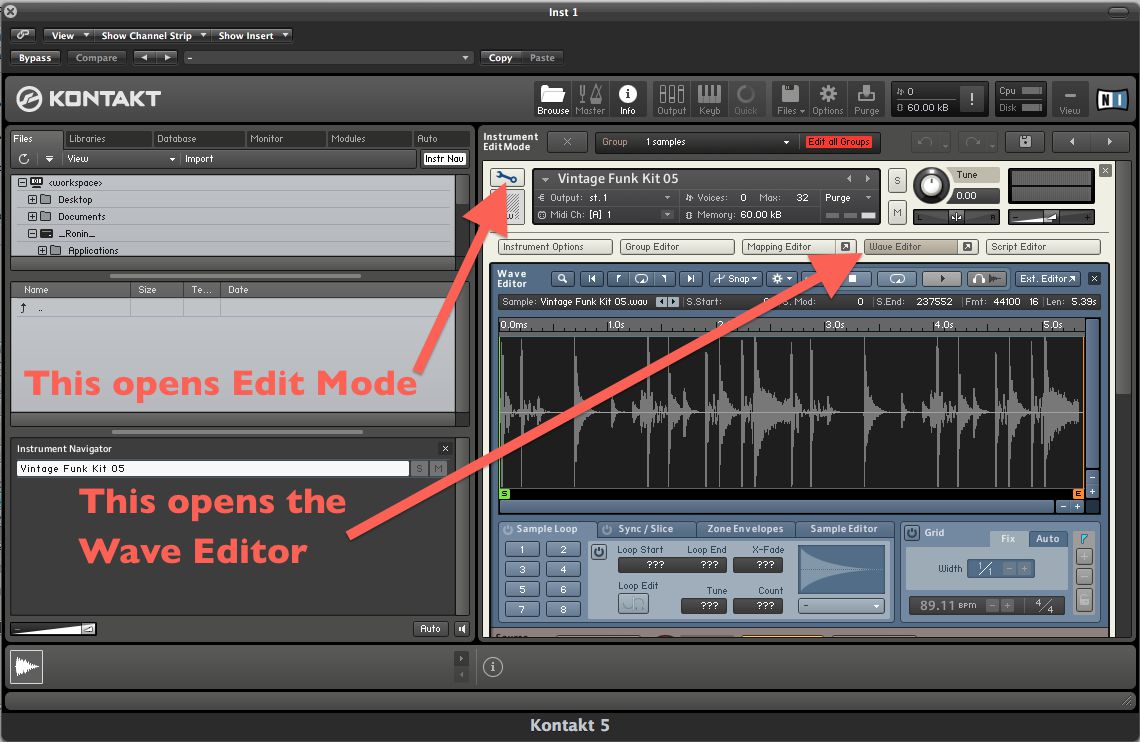 Now that we're in the Wave Editor, we need to access the Sync and Slice area by clicking the Sync/Slice tab.

Sync/Slice is going to determine how our sample loop gets its timing from our host DAW. It also allows us a way to play the individual slices of a loop using MIDI...

There are two sync modes: Timemachine Pro, and Beatmachine. 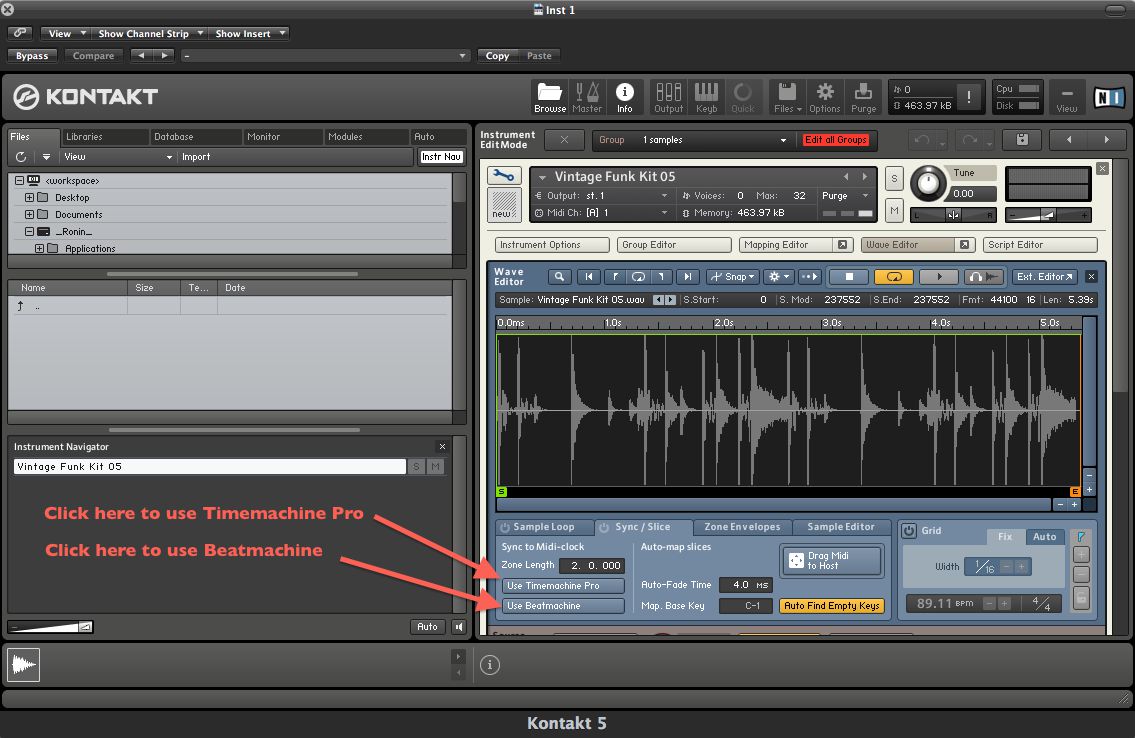 Timemachine Pro will allow a sample to match the tempo of a song while retaining pitch.

Beatmachine will slice a sample into zones that can be played back via a MIDI sequence. Each individual slice is at the original pitch and tempo, and the audio is not stretched or compressed to fit the tempo set by the DAW.

Step 4 - Getting the Tempo Right

Kontakt will attempt to set the bar length of the sample if it is a loop. In our current configuration, Kontakt has guessed that our loop is approximately 89 BPM. That's just about right. We can get it dead on if we select the 'Grid' power button, and change the tempo from 89.11 to 90 BPM. Notice how the grid changed behind the sample to accommodate the new tempo? If we choose to loop this sample, it should loop seamlessly now. 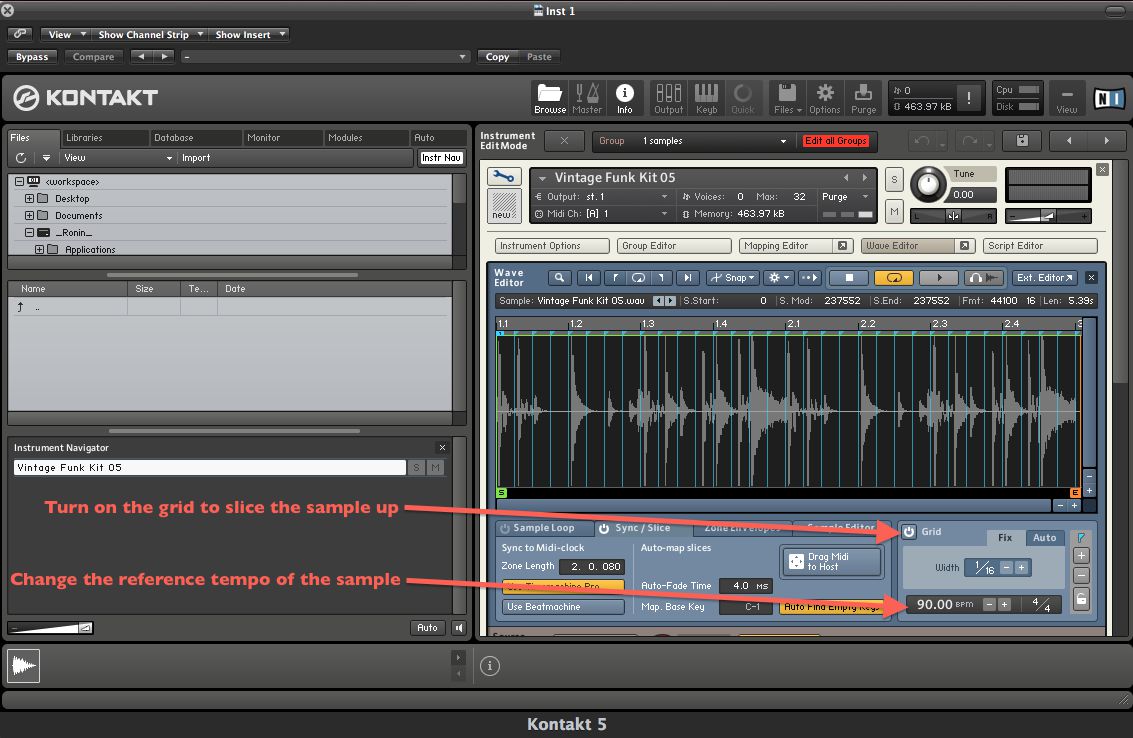 Now listen to the sample using both Timemachine Pro and Beatmachine. Change tempo in the DAW to hear the differences between the two modes.

To get our sample to loop, turn on the 'Sample Loop' power button in the tab next to Sync/Slice. Now our sample loop will play back looped and in time.

Now, with either Timemachine Pro or Beatmachine enabled, use 'Drag Midi to Host' to get the individual slices of the sample into your DAW.

Click and hold on the 'Drag Midi to Host' button... And drag to a MIDI track. This will create a MIDI region that will play the sliced sample in tempo to the song, and we can now play the individual slices with a MIDI keyboard controller.

This is just scratching the surface of Kontakt's capabilities, but it's a great start to having a blast with this powerhouse sampler.

Lung
In the first step you drag an audio file from Logic's arrange window into Kontakts module list. For some reason I'm not able to get this to work. I'm using Logic 9.1.7 (64bit), OSX 10.7.4 and Kontakt 5.0.3 (as 64bit AU). Any ideas?
Shankdub
He is using the kontakt plugin in Logic, and in Kontakt, there is a 'browser' which is what he drags the file from, not from Logics arrangement view.