Five Ways to Use Harps & Plucks in Any Arrangement

The harp may not be the first instrument you think of when arranging but here are some ways you can use it to your advantage that you may not have known about.

As a musician who has long pursued, practiced and enjoyed electronic music, I’ve often felt a large amount of gratitude for one of the perks within the job description: the ability to call up any instrument, as opposed to being stuck like other musicians with one instrument. One instrument throughout my career that I have found myself calling back up time and time again is the harp. In this article, I’d like to focus on some of the perks of using Harp/Pluck style instruments within your arrangement, along with some tricks that you can use to make these angelic instruments really sing.

Why Would I Use A Harp Patch In the First Place?

For a lot of electronic musicians, there is this idea that most of the emphasis should be on the bass, drums and percussion. And while beats and bass really move a dance floor and bring a sense of solidity and foundation to a mix, it’s also good to have other tones within your mix in the higher register to give more dimension, air and melody and ultimately widen the overall frequency range of your song, making it something more pleasurable to listen to.

Instruments like the female voice, flutes, viola, violin, oboe, and harp have long been used by many a composer to bring the light back in to the darkness. However, unlike the other instruments listed, harp has the tightest gate time, at least to my ears, and because it’s so crisp it almost always cuts through, regardless of how much you’ve got going on underneath. Let’s go with some examples.

Most people do not know what an arpeggiator is. But for those of us that do, and know how to use them, there is a special joy in thick, complicated arp patterns. However, you’ve probably noticed that arp patterns, especially when incorporated in with other thick synth lines and basses can get completely lost. I love to use harp patches with arpeggiators as they glide over the top of almost any complicated sound stage without sounding washed out. Because harp plucks have such a short decay time while still having such a high register, it’s easy to make out certain melodies where other instruments easily wash out. 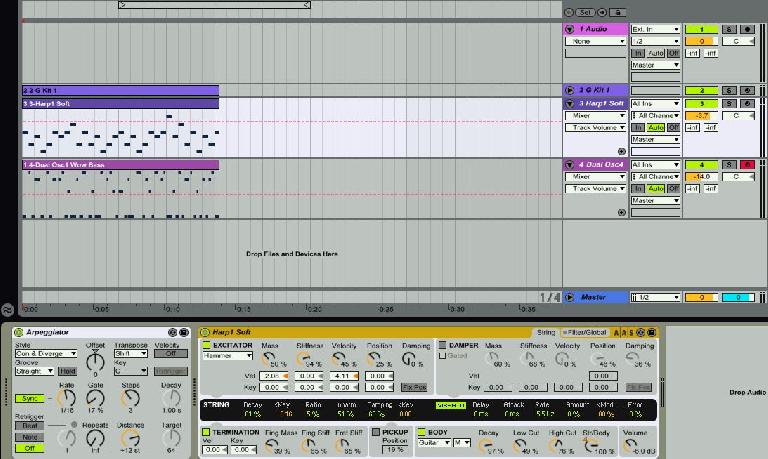 Plus, building a patch up, starting from a basic harp patch (sampled, or synth) for arpeggiated purposes has added benefits. Because the instrument is so pure and tight in the higher registers, it works wonderfully with any effect you throw at it. Try some thick chorus, a little distortion and some reverb to make a pristine, hybrid patch that sounds like a synth, plays like a synth, but cuts through like a harp!

Every now and then within a composition there comes the need to elevate certain sections of an arrangement to give it more regality, draw the listener in and sum up the crux of whatever melodically, emotionally, or lyrically the composer wants to say. Harp flourishes, be they played or sampled are awesome for bringing in new sections of a song in a way that is definitely heavenly.

Try dragging your fingers up and down the keyboard while you’ve got a harp patch pulled up on your favorite synth or soft synth, starting from the root note of the song that’s currently playing within your DAW. Dragging up the keyboard, toward the right where the higher notes are tends to make the song feel like it’s moving up. Indeed it is as the harps provide a frequency shift in the higher registers of the song when this takes place. Perfect for introducing a key change. 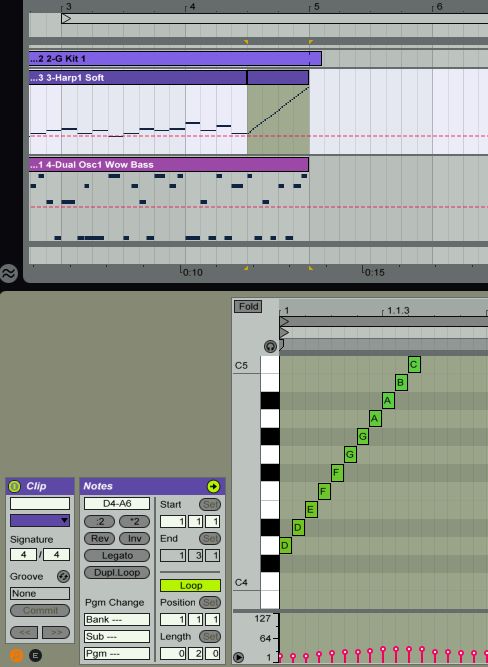 Or, drag your finger down the keyboard, starting from the root note or complimentary key to create a shift downward. Bringing things down again on the dance floor, grounding the moment and centering things for a verse or melodic interlude. 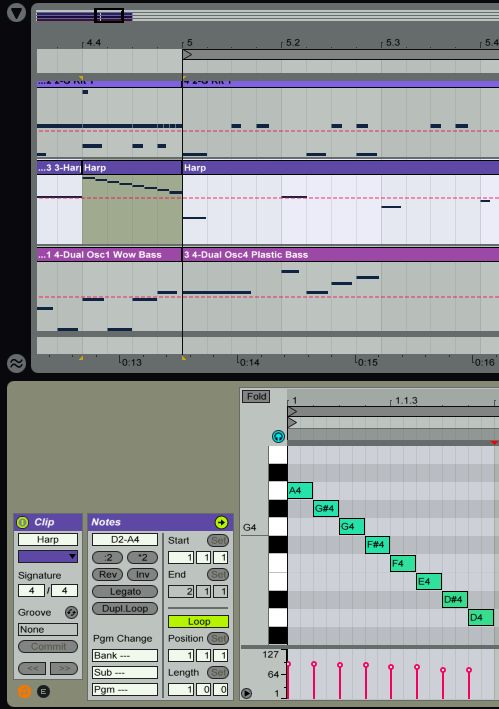 Harps are also excellent with reverb. You can use reverb and harps together to create some ghostly patches with decay times that would be impossible with other instruments. In most cases, I tend to prefer setting up a few effects across my mix, like reverb and delay on separate auxiliary tracks so that I can spread a small number of actual effect devices over several tracks.

Harp patches are one of the few types of patches that I like to have a dedicated reverb unit on as an insert. It’s one of the few instruments that I still find playable when the Dry/Wet knob is up a little higher than normal. With the harp more ‘washed out’ it almost feels like another, more atmospheric, organic instrument that just seemed to coalesce out of thin air. 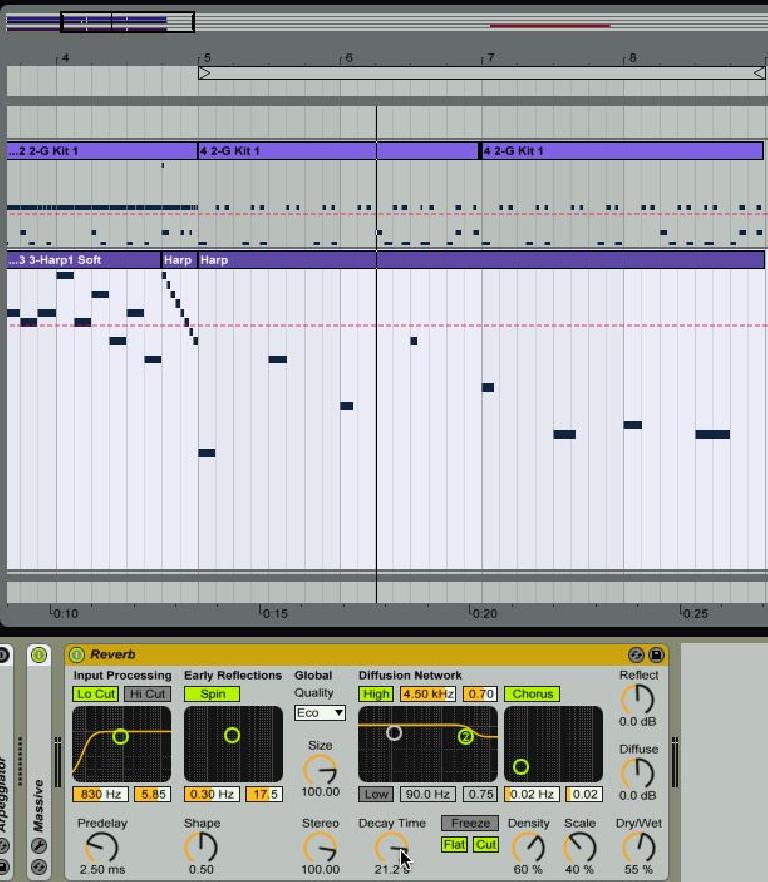 Beginning from the last example: a harp-style patch with a lot of reverb, I often find it fun, exciting and just something different to bounce a heavily reverberated harp on to another audio file. Then reverse the audio file and reintroduce the now reversed, whispy, more ethereal harps.

Because the harps are so high and so thin, you can have them running in the back and still have plenty of room for other instruments within your arrangement. Definitely try setting up some automation for rhythmic panning or run a plug-in like Pancake from Cable Guys where the harp is panned in rapid, LFO driven movements back and forth in a rhythm you predesignated. 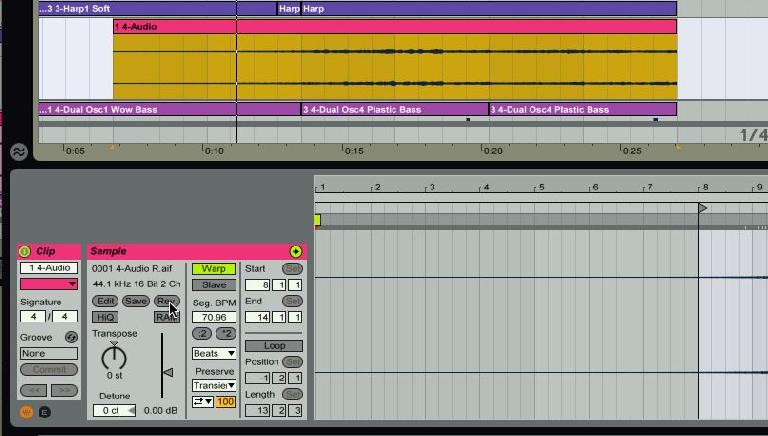 Playing piano parts within any sequence is high on my list of favorite instruments to morph over in to. Sometimes however the piano can be a little too big, a little too... mainstream. Try subbing a harp patch for a piano written track/sequence sometime. The harp, because of its plucky nature can easily play piano parts, and because it’s a little thinner and a little more pure, it gives a very different energy that is highly suited for kid's shows, playful background music and lullabyes. 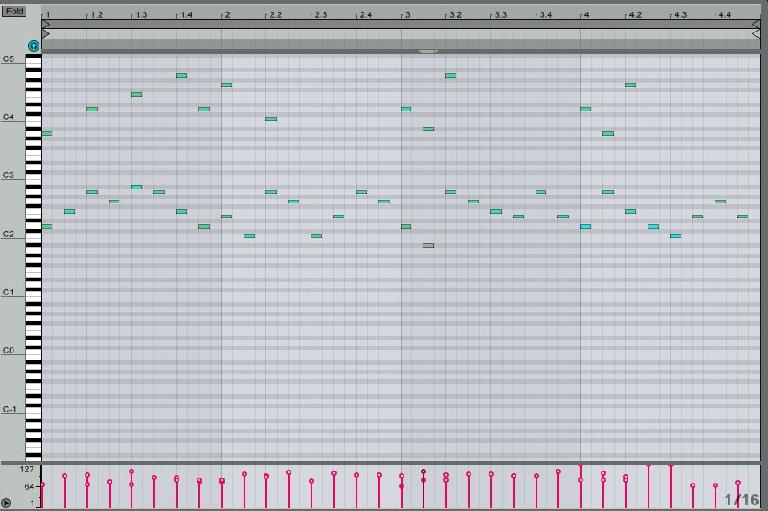 The Harp isn’t going to win you any awards for fattest track on the planet, most likely, on its own. Unless of course you get really creative. However, the ideas contained herein for the Harp are only a few, and are definitely not the only way of using them. Try bringing in some harp and see if you come up with any tricks of your own... Or just use some of mine.