Deconstruct your sounds using machine learning - Factormini by Jburred is available now for under Â£40.

Today, Isotonik Studios releases Factormini, an introductory version of Factorsynth. Both share the same decomposition engine and contain the essential features for sound deconstruction. You can factorize your clips with up to 8 components, remix and recombine them in session or arrangement views, randomize the component generation and export the components separately to wave files for further editing.

Users of FACTORmini can later upgrade to Factorsynth for more advanced features, such as cross-synthesis and detailed component editing.

Factormini is the introductory version of Factorsynth, a powerful new type of musical tool that brings machine learning to Ableton Live. Both devices use a data analysis algorithm called matrix factorization to decompose any audio clip into a set of temporal and spectral elements. By rearranging and modifying these elements you can do powerful transformations to your clips, such as removing notes or motifs, creating new ones, randomizing melodies or timbres, changing rhythmic patterns, remixing loops in real time, creating complex sound textures. 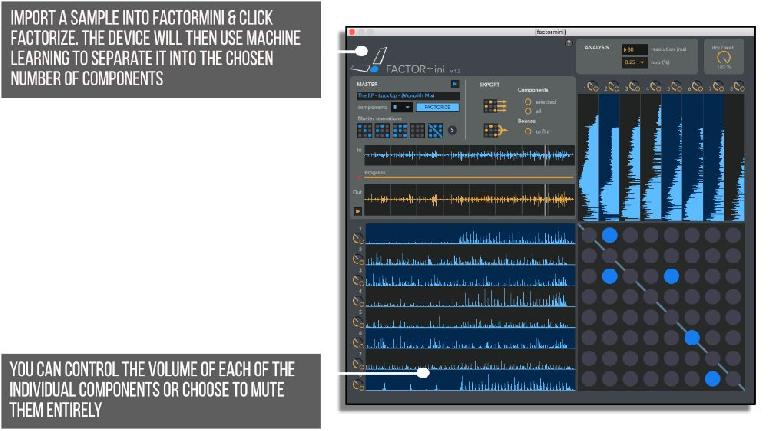 Unlike traditional audio effect devices, which take the track’s audio input and generate output in real time, Factormini is a clip-based device. It works on audio clips from your Live set that you have selected and loaded into FACTORmini . Once an audio clip has been selected and loaded, it can then be decomposed into elements. The decomposition process is called factorization, because it is based on a technique called matrix factorization.