Language
Is this a first? A reverb effect to help truly sonically shape harmonics. Fabfilter's Pro-R could be accurately described as a surgical reverb plugin. Noah Pred tests out its repairing abilities.

FabFilter are renowned for their ultra-smooth filters, hyper-accurate equalization, and creative take on effects that most would assume had already been explored to their limits. With the announcement of their first dedicated reverb effect, Pro-R, there’s no shortage of excitement to see how this innovative company would interpret the ultimate classic spatial effect.

Launching Pro-R as a plug-in, I was struck by the elegance of its trademark FabFilter design. Seven large knobs along the top provide the bulk of reverb settings, while what appears to be a pair of large EQ curves combined with real-time analysis dominate the rest of the interface. 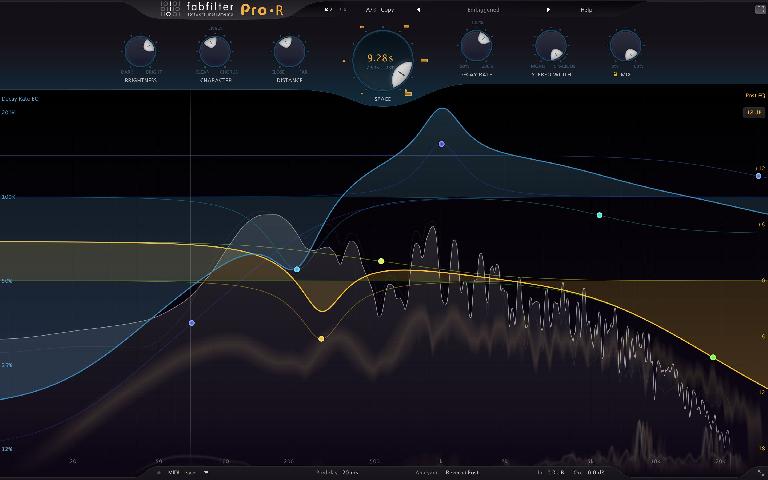 The leftmost three knobs provide control of the resulting reverb character with an array of pleasingly musical controls. Brightness predictably glides from darker, more muted tones on the left to radiant, shimmering expanses toward the right. Character controls the complexity of reflections with a stark response at lower values and more intensely chorused patterns as it increases; the default middle value is labeled as “lively”, and strikes a nice balance between occasionally desirable yet artificial chorus effects and a more realistically simple response.

The Distance dial determines the perceived range between listener and instrument, with closer settings successfully portraying intimate immediacy, and higher values moving the sound ever further away in the perceptual field; engineers seeking additional control can access a dedicated, BPM-syncable Pre-Delay setting along the bottom of the interface that works in concert with the Distance knob.

The largest central dial, Space, smoothly determines both the size and structure of the emulated architecture, ranging from miniscule boxy closets all the way up to majestic cathedrals. To the right of this, the Decay Rate dial multiplies the spatial decay by a percentage amount, from 50% for reductive purposes up to 200% for vast expanses. Stereo Width goes from a narrow mono response up to stereo and beyond, with an exaggeration of the side signal up to 120% for pleasantly wide spaces. Finally, a Dry/Wet Mix knob can be locked in place so as not to change balance along with presets.

Without any EQ applied, Pro-R already delivers one of the cleanest, most sumptuous reverbs I’ve experienced. And yet, where Pro-R really excels not only as a precision tool but also as a creative one is with the exquisite included FabFilter EQ enabled.

The blue EQ line allows you to adjust the Decay Rate of specific frequency bands. Similar to the high, mid, and low decay times of classic Lexicon units—yet far more sophisticated in scope—the Decay Rate EQ allows you to elongate or shorten the decay of specific frequency bands, accurately tuning your decay to the desired harmonics. For a truly inspiring and fluid editing experience, each band can be set to one of four curve types (bell, low shelf, high shelf, or notch), and Command-dragged for curve bending purposes; you can even select multiple bands at once to simultaneously adjust their frequency, gain, or both—in either direction. It includes a host of other modifier keys for even more precise editing, all of which should be familiar to users of other FabFilter plug-ins.

The bottom of the interface displays the frequency spectrum along the horizontal axis, while the left vertical axis, which lights up blue when working with the Decay Rate EQ, shows the corresponding decay rate percentage; along the right vertical axis is a yellow Post EQ gain amount, measured in decibels, that corresponds to the second, Post EQ line, lighting up yellow when it’s selected. Employing the same editing features as the Decay Rate EQ, it allows you to further shape the resulting reverberation response with up to six more bands. Better yet, the output gain is automatically adjusted to compensate for changes in the Post EQ structure, so there’s little need to make further mix adjustments outside the EQ area.

Throughout my testing I was able to achieve exceptional results with whatever source material I threw at it—and the ability to emphasize or eliminate precise harmonics allowed for a range of creativity I wouldn’t normally expect from a reverb plug-in. Combining the lush spatialization of ultra-high fidelity reverberation with the sonic shaping capabilities of FabFilter’s acclaimed EQ and the Decay Rate curve, Pro-R might just be the world’s very first “surgical” reverb.

Pros: One of the best sounding reverbs out there with a stunningly intuitive interface and innovative EQ features that clearly set it apart from its competition.

Cons: Probably out of range for most bedroom budgets.