Exploring the Weird and Wonderful using Image Synthesis in Harmor

Language
You've probably come across Harmor's resynthesis mode. But did you know about the image synthesis functionality? If you like odd, weird and random soundscapes then this could be for you.

Resynthesis is an amazing and stunning feature of Harmor. However, there is another mode of operation for Harmor's incredible Image Panel that deserves a little attention for sound, experimentation and sheer fun: image synthesis. Let's check it out!

In a fresh Harmor, using the default patch (found in the patch browser), go to the Image Panel of Harmor by pressing the IMG button... 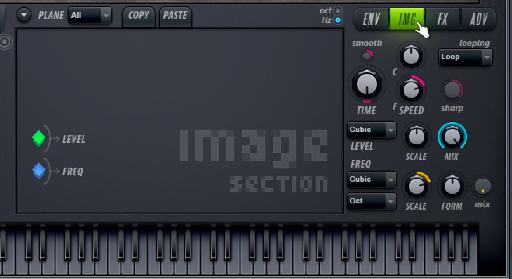 Now, here's where the choices come in! This is to either drag in audio, or drag in an actual picture. This is where it can get a little confusing, so let me explain.

When you bring audio into Harmor, it will automatically be recreated in Resynthesis mode. As I mentioned, this mode ensures that the audio plays back as close as possible to what's actually going on in the audio file. Remember, this is a synthesizer trying to replicate audio. This is not sampling! But, because so much emphasis is on recreating the audio file, in my case, a drum loop...

... Harmor has to use a lot of resources on your computer. And, this also limits the possibilities of what can be done to manipulate audio. If I go to the Image Options drop-down menu, there are additional options for imported audio. However, you'll notice that many of the options in this menu are grayed out!

The reason that so many options are missing is because we are still in Resynthesis mode. However, if we choose the Convert to Image Synthesis Mode, suddenly, we've got more options.

Once we're in Image Synthesis mode, where Harmor is no longer looking at all of the spectral layers of information that makes up the whole of the audio file, and only looking at what is now a converted, 2D image, in which Harmor uses to produce audio. And, because it's now just a 2D image, the Image Options menu is now populated with editing options for an image!

If you look at several of the available options, you'll note that they are, in fact, options you'd normally reserve for applications like Photoshop, or Gimp, and many other image editors. In fact, Image-Line made it extremely easy to move between image editors, if you'd like to take this to another level. If not though, you'll find that you can have very basic fun having Harmor Crossfade the image (10%-50%), Degrade (Horizontally, and Vertically), as well as classic image editor commands like Invert and Flip Horizontally.

These commands do actually adjust the visual image of the waveform, as well as alter the sound in very unexpected ways. Especially Generate Random Cloud, which spits out random, static images on several planes.

Even as I'm working with a beat, it's easy, at any point to drop something else into Harmor's image panel, and go to a soundscape built off something completely different, still being orchestrated by the additive engine. 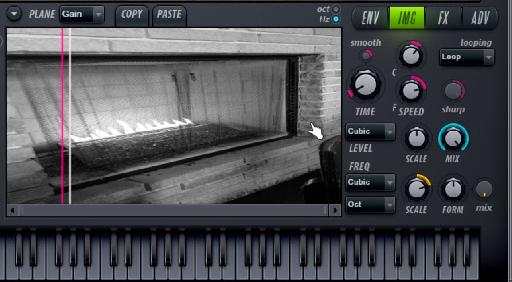 I dropped a picture of a fireplace into the Image Panel, just to see what it would sound like. Because this image is not very complex, I'm only really given a seemingly basic waveform that becomes a little bit more complex over time. If I use the Coarse and Fine knobs, I can increase the playback speed of the image, as a key is pressed. But, it only really sounds like random noise, and not in a good way. This is where some options that are right under your nose, with Harmor, can suddenly turn something that is very basic and uninteresting, into noise odysseys that have really yet to be discovered and utilized in most forms of electronic music. One obvious path of destruction would be to begin using Harmor's brilliantly designed Articulators for modulating playback speed, Image Gain and Freq Pixel Scale, and the Image Time Offset, you'll find yourself in a position to have a lot of fun through some amazing sound. 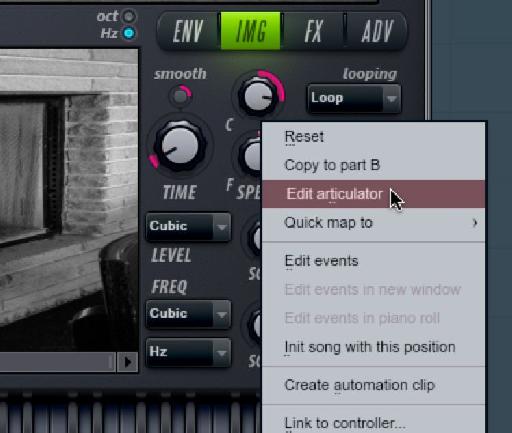 Or, you can get even more creative by placing other pictures into another plane.

Being able to have opposite Freq and Gain planes would be where Harmor truly turns into an additive sound laboratory. The Plane drop-down menu gives you individual access to Freq and Gain planes. In Resynthesis mode, Harmor is actually reading several planes. But, when you switch to image synthesis mode, Harmor narrows things down to the two that I mention. The cool things is, in synthesis mode, you can have two pictures layered over one another. This can lead to some amazing, evolving waveforms that are random, noisy and wonderful building blocks for all sorts of industrial, sci-fi and even organic worlds. 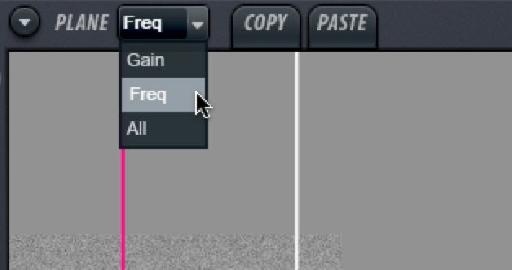 I'll switch to the Freq plane, and I'm greeted with a grey, blank, bland picture. What's amazing is that I can drag another picture, or paste another picture into this Plane, or Layer. I wind up choosing a picture of my dog, when he was a puppy. 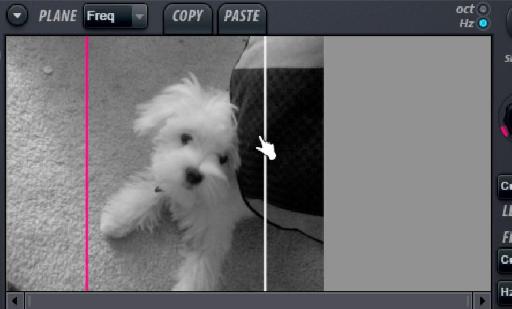 Keep in mind, the Freq plane is now holding the puppy picture. The Gain plane still has the fireplace. If I switch to All, in the Plane drop-down menu, I get almost a '70s tie-dye, psychedelic pic, with the puppy over the top. 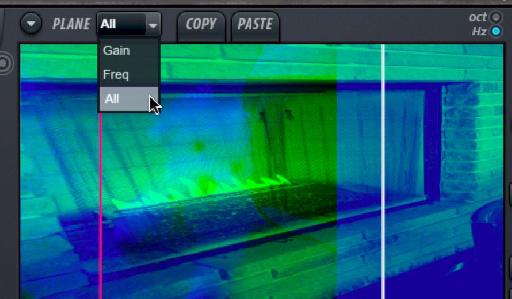 Looks are only part of the fun. I raise Unison order number and sustain a key. With the two competing images, layered over one another, I'm given a sick, growing waveform that could be the intro of a song, a transition, or the building block of a really sick bass, or lead. 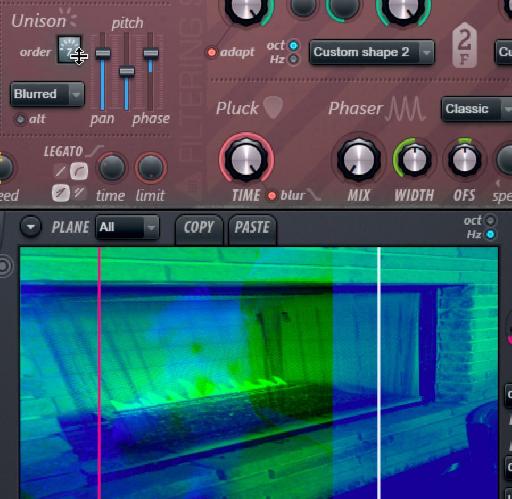 Hopefully, this has provided a small glimpse into what is possibly with Harmor's Image Synthesis mode. If you have a taste for random, bizarre and other-worldly textures, or you just want to make a bass synth that originate from an actual picture of your band's name, you owe it to yourself to spend some time here.