Harmor is an extremely powerful instrument that can create new sounds from audio that you import, but even do the same with images. How, you ask? Read on to find out...

One of FL Studio’s Harmor synth’s most powerful features is its ability to import in audio files and resynthesize them with its synth engine. At heart Harmor is an additive synth, but this resynthesis method takes it to a whole new level. Let’s take a look at how you can resynthesize your audio with Harmor.

I’m going to record an audio part into the playlist. This is just going to be a very simple Aah sound. 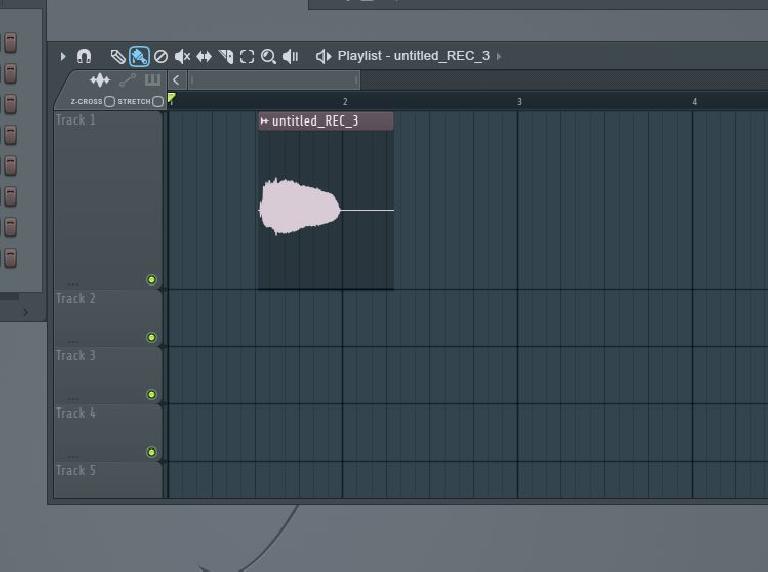 What I want to do is now load up an instance of Harmor. On the bottom right click on the IMG Tab. 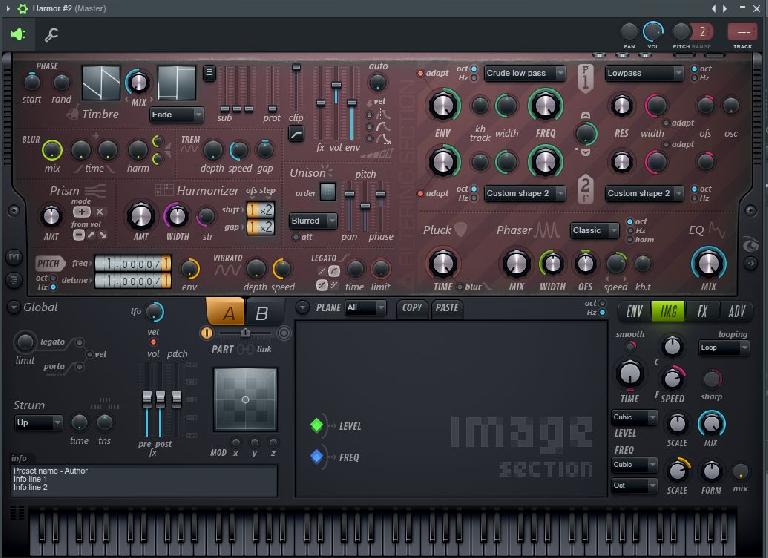 Then I’m going to navigate to my recorded folder. This shows me the files I have recorded into FL Studio. Then I’m going to drag my newly created audio part into the blank black area in the bottom middle part of Harmor. This pulls in the audio part and resynthesizes it with its synth engine. 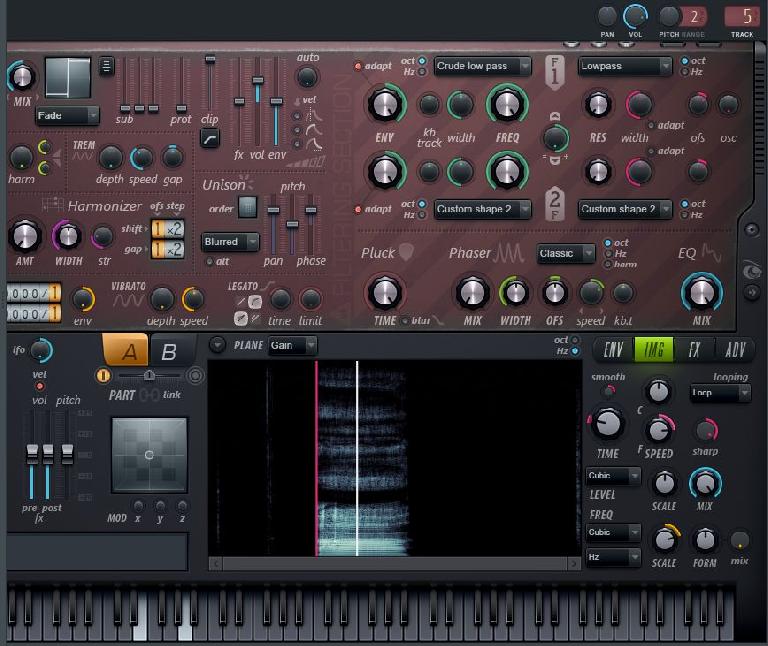 Now when I play a key on my MIDI controller I can hear it playing back my vocal Aah sound, and this is mapped to C3 like a standard sampler would. So what’s probably a good idea is to play a C note on an instrument, maybe a piano and then sing your Aah note at the key. This way when you pull it into Harmor it will be pitched to the right key. Or else it’ll be an offset of the key. So this is just some good practices to put in place before adding your audio file to Harmor. If you following along, record in your own vocal part. It can be Aahs or Oohs, or whatever you want.

Editing the Timing of the Part

There is a slight gap at the beginning of my audio part. So what I can do is drag the Time dial and this will choose where the start of the sample playback is. There’s also a Speed dial to control the rate at what the resynthesized audio part is played back. 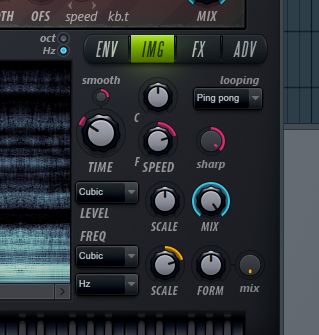 Now here’s an even cooler quick thing to try. Drag the Time dial to the end of your audio part., Then turn the Speed dial to the left once it goes past the middle it goes into the negative meaning that the part with play back in reverse. Pretty cool if you want some reversed effects.

An alternative is to edit the gaps out of the audio part in maybe an audio editor like Edison, and then save it out as a new part so when you pull it back into Harmor it’s right at the beginning. But I’m not too fussed about this so I’m just going to change the start position of the sound with the Time dial. And another cool thing about this resynthesized voice, is if I play back a chord now on my MIDI controller you’ll hear a chord of my Aah-ed voice.

So by default when you drag an audio file in it is set to loop. But if you have bits of silence before and after the audio part it’s still going to play through the whole file before looping. To fix this you can create a looped selection. To do this, hold down Ctrl and drag in a selection area on the IMG graph on where you want it to loop. This creates a pink looped area, you can drag the node points at the bottom to fine tune the looped selection. 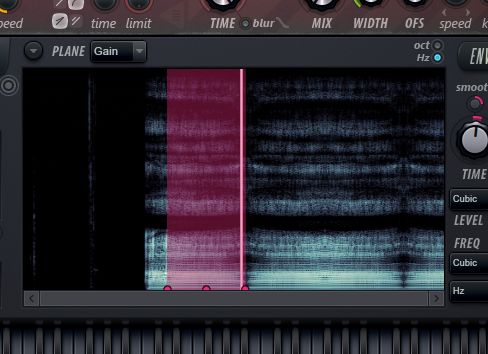 What's even better is you can try different looping modes. My favorite is the ping pong mode. So this will play forward and then backwards which works quite nicely when I want to build up interesting pad sounds. The reverse playback makes it sound less like a looped back part. 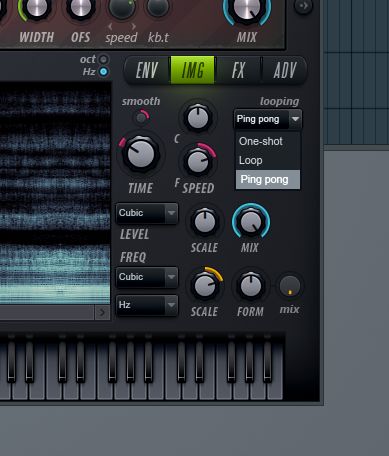 You can take this sound a step further and apply some of the global effects to it. Click on the FX tab, and here you can add some Distortion, Chorus, Delay or Reverb. I like to add some chorus to add some extra depth and then maybe a bit of reverb to give this newly created sound a sense of a space it belongs in. 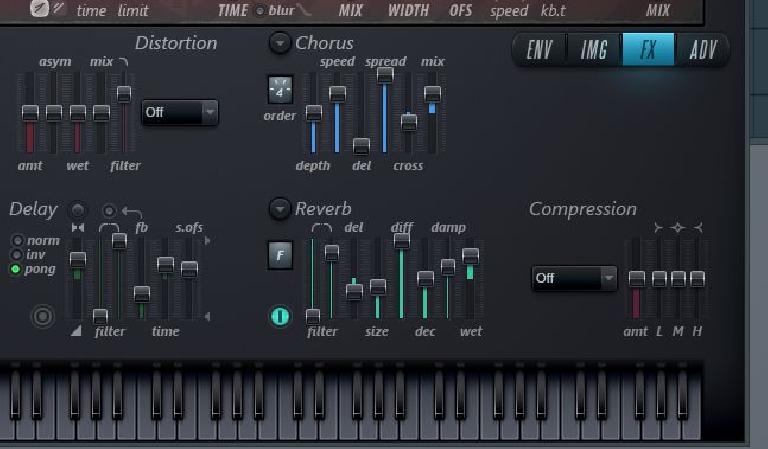 Using the Synth Tools to enhance the sound

And because you’ve dragged your audio into Harmor, you can use Harmor’s synth editing capabilities to enhance the sound. For example, you can now add Harmor’s filters to your sound to create even further interest. Or maybe I want to add some Phaser to add some extra modulation to the sound. What I personally like doing is increasing the Unison order to the sound. This duplicates the audio part and just gives it some more depth. I’ve upped mine all the way up to 9. Then I use the Harmonizer amount to introduce some extra higher harmonics to the sound.

Also what’s quite nice is to add some Tremolo and Phaser into the sound giving you some really interesting modulated sounds. So by taking a simple audio file, resynthesizing it and then adding the features from the Harmor Synth Engine you can really get some crazy results. 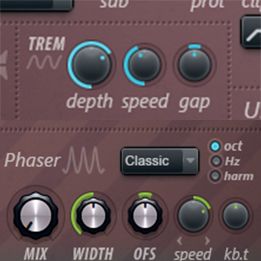 Or Just Use an Image

Now you probably wondering why am I dragging an audio file to the IMG area, which is short for image. Well you probably guessed it. If you don’t want to pull in audio, or you don’t have any audio files lying around, you can also drag pictures into this area, and it will convert the image to a tonal representation of it. So try this out, drag in an image, and then play back on your MIDI controller and hear what the image sounds like resynthesized. Pretty neat hey! And then you can do all the same things, you can go in and start filtering and modulating it just like the audio files. 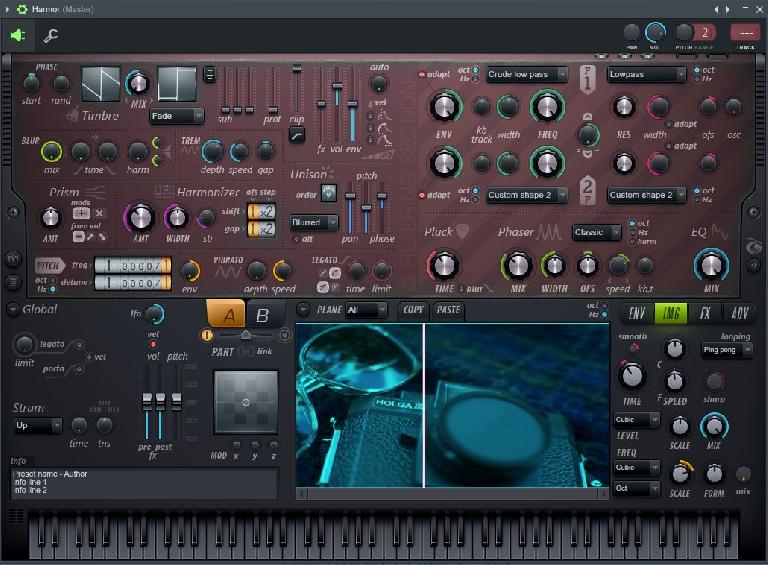 So that’s how to pull an audio part into Harmor and apply resynthesis techniques to get your own unique sound. You are guaranteed that no one else will have the same sound, especially if it’s a recording of your own voice. So go in there, record some vocal noises and pull them into Harmor and hear what resynthesized results you get.