The Sampler Track in Cubase 9 can be used for easy looping, triggering and even building your own sampled instruments. Here's how to get the most out of it.

Adding a Sampler to the Track

Let’s start off with an audio track with a drum loop on it. I want to pull this sound into a sampler and chop it up so that I can use the first bit as a kick sampler. What you first need to do is create a Sampler Instrument from the Project Menu. Go to Add Track and then choose Sampler. 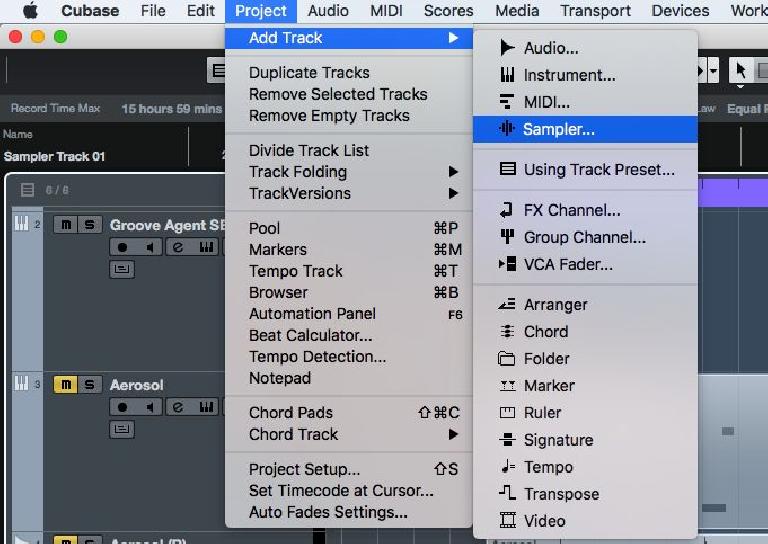 You can give the Sampler its own name, maybe Kick Drum or something. You can also add a sampler track by right-clicking on the empty grey area under your tracklist and choosing Add Sampler Track from the pop-up contextual menu. 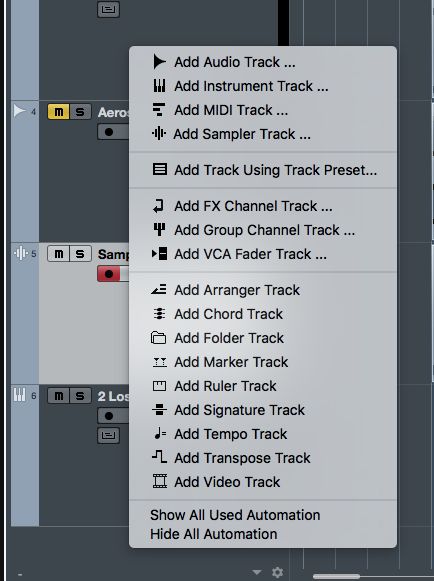 When you create the track, the Sampler will show up in the lower zone.

Add Audio to the Sampler

Now to add audio to the sampler track is quite easy. All you have to do is drag the audio file onto the sampler in the lower zone, where it says drop audio here. The audio will be imported into the sampler, and you’ll see the waveform. 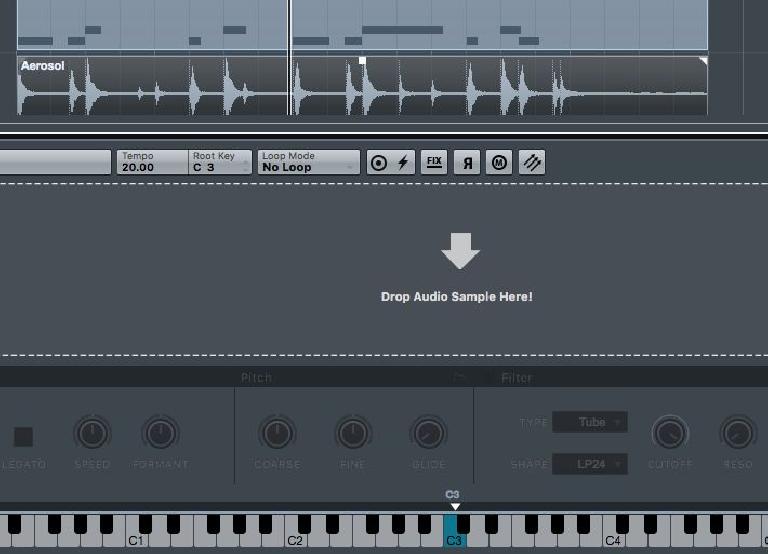 You can see that this is a drum loop, and I want to remove all the other audio in the file except for the first drum hit which is the kick. So all I have to do is grab the ‘Set Sample End’ locator and drag this all the way to the left to indicate when I want the end of the sample to be. 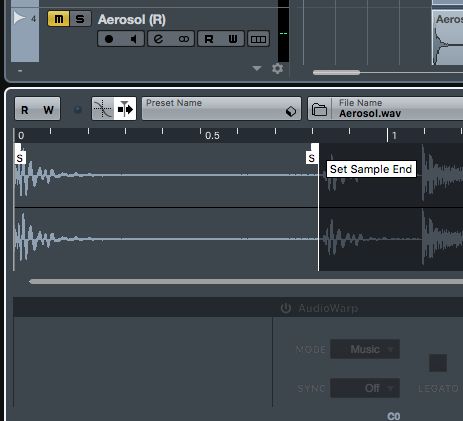 I can also add a fade on the end to smooth out the end sound of the sample. 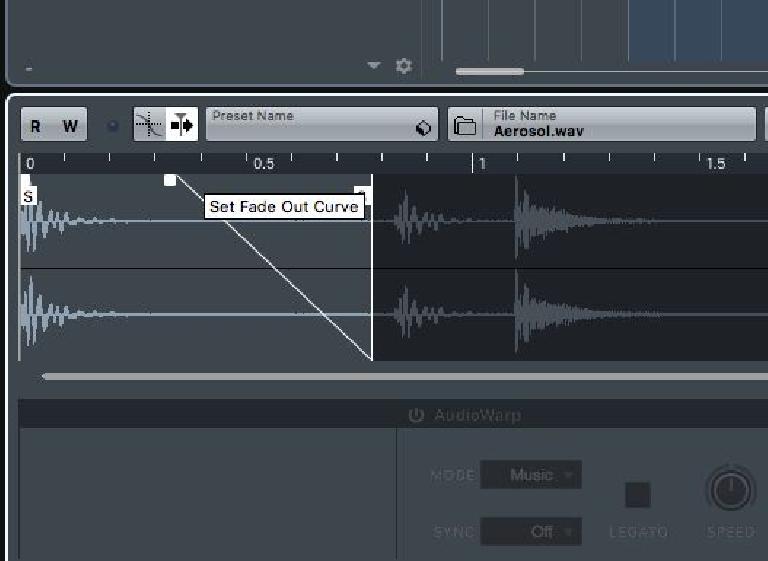 The beauty with the sampler track is that I can now customize this sample in the engine. For example, I can go into the Amp Envelope and change the sustain and release points on the sound. I’ve shortened the release time to tighten up this sample.

With the Pitch Envelope, I can change the pitch of the sample, plus add in some glide. This works well if you're creating a tonal sound like a bass, and you want each note to glide into the next note pitch. You also have a Filter Envelope so I can tailor the cutoff and resonance on the sound and use different filter shapes. The most interesting envelope is the AudioWarp section. Here I can either choose the source as a Music or Solo sound. For this one shot sound I’m going to use Solo, and then use the Formant dial to alter the sound of this Kick. 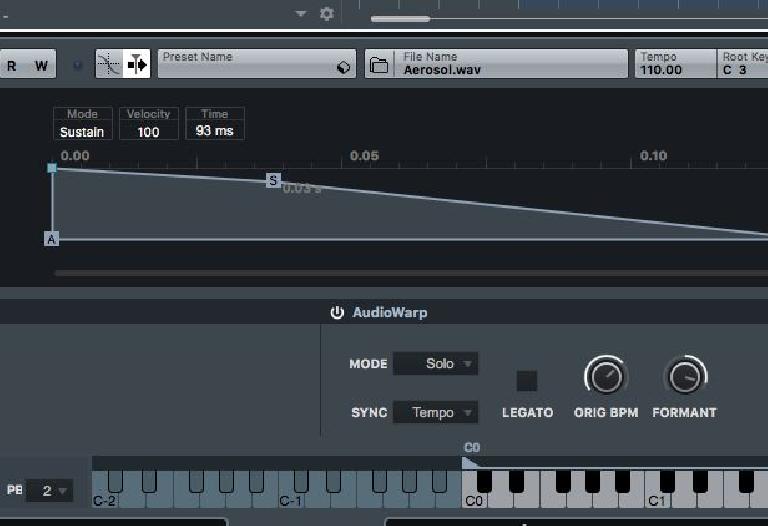 So that was demonstrating how to create a single shot sound, now how do you create a sound in the sampler that loops? Let me show you. I’m going to use that same drum loop sample. I’m going to drag this drum loop to a new sampler track. Now for the loop mode, I’m going to set this to Continuous. I’m also going to enable AutoWarp mode. I’ll leave the Mode set to Music, and under Sync, I want to choose Tempo. This will make sure that the sampled loop is always in time with the tempo of the project. Also make sure to put in the right tempo in the Original BPM field. If it isn’t right, just click the box and type in the correct tempo. In addition to the start and end markers for the sampled song, I can also set loop points where it will loop in the audio. I want the first part to play through, but I want the second part to loop. So I’m going to drag in my left loop marker to the point where I want it in the sound. Then I’m also going to drag in the right loop marker to set where it loops. The great thing about this feature is that there is an audio visual waveform that displays in green, so I can match up the transients with the original sound to get a perfect loop point. 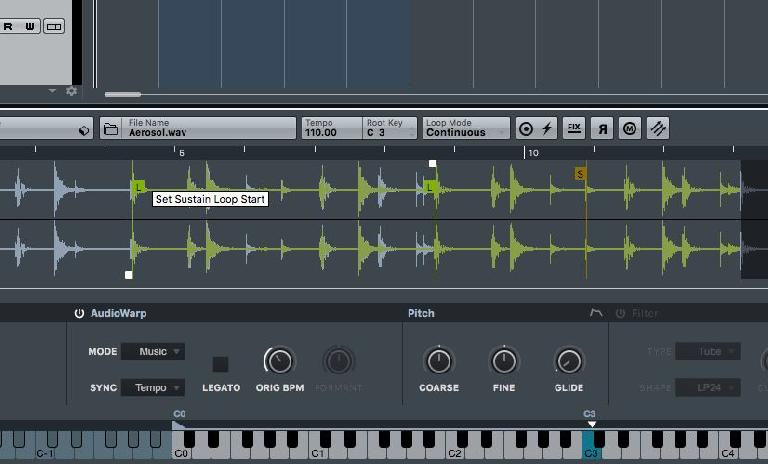 But if you’ve worked with samplers before you’ll realize it’s not always that easy. When I hit my C3 key which the sampled sound is assigned to it starts the loop, but then when it reaches the end loop point where it loops back to my first loop marker, there is a slight click in the sound. What I can do to correct this is to add some small crossfades between the section. And to add these fades I just grab the white square box near the loop points and drag them out to create the fades. It now sounds like it's looping more seamlessly. Also the beauty of using the Auto Warp mode is that if I now choose to change the tempo of my project the loop will adapt to the new timings. This makes it really easy to work with different looped sounds and get them to sync with your project.

Because I pulled the drum loop onto C3, when I play different keys on my keyboard it plays back the sample at different pitches, but it still stays in time. This can be quite a handy feature with more tonal sounds but it’s also interesting to use it with instruments like drums, which don’t tend to change pitch. Now in the sampler track I can use this re-pitching of percussive instruments to our advantage for interesting sound design elements So that is how to use the new Sampler Track in Cubase 9 to create either one shot sampled audio sounds, or how to take a longer sound and create loop points and make sure it loops seamlessly. Have fun with the new sampler track, pull in some audio files you have lying around and tweak them in the Sampler Track. You never know it might add a different element to the song you’re working on.

Learn more about Cubase in the AskAudio Academy here.