Expanding Your Audio Interface (Without Buying A New One!)

If you have ever wondered what those extra ports on your audio interface are for, look no further for an explanation. Joe Albano reveals how you could get more I/O without lifting a finger.

No matter how many channels your DAW audio interface has—from just a basic stereo pair to the 8-channel i/o of the majority of mid-level boxes—there’ll likely come a time when you need more ins and outs. Additional inputs may be required when recording a live ensemble, especially one with an acoustic drum kit, which can eat up 8 or 10 inputs all by itself! And extra outs might be needed for independent musicians’ cue mixes, or patching those external analog hardware processors into a mix.

There are a lot of ways to expand your system’s i/o without replacing your current interface with an entirely new (likely pricey) one with 16 or more ins, which sometimes may need breakout boxes and cables. Some manufacturers include advanced networking connections on their interfaces (Dante, MOTU AVB, Focusrite RedNet), which can offer comprehensive distributed i/o options. But for this article I’m going to focus on what are probably two of the most common possibilities for adding additional i/o to an existing system. One is the ubiquitous ADAT lightpipe standard, and the other—for Mac users specifically—is the MacOS’s Aggregate Device option, for combining two or more interfaces.

The Optics Of ADAT Lightpipe

ADAT lightpipe is an optical transmission standard for sending/receiving up to 8 channels of digital audio over a single fiber optic cable (4 at double the basic sample rates). It was originally developed as a way to combine up to four of the company’s 8-track videotape-based digital recorders, which ushered in the project studio revolution back in the 90’s (just before computer/HD recording came of age and took over).

The physical connections are made via optical Toslink connectors—the little square plugs and jacks you see on the back of just about every audio interface with more than 4 channels. Connections are one-way—two cables are required, one for (8-channel) input and another for (8-channel) output. If you eyeball the end of an output connection, you may see a red light—that’s the optical signal, if present; that’s where the term “lightpipe” comes from.

Though ADAT recorders have long since been relegated to the annals of recording history, as they gave way to DAWs the ADAT lightpipe standard was adopted as the informal, though virtually universal standard for expanding the i/o of DAW systems. Nowadays, as I mentioned a moment ago, just about every 8-channel interface includes at least one, if not two pair (i/o) of ADAT connections, making it possible to expand the system by 8 channels or 16 channels, adding to the existing channel count of the i/o already onboard.

This makes it easy to gradually take an 8-channel system to 16 and eventually 24-channel i/o, adding the additional ins and outs 8 channels at a time, as the need arises and the budget allows. Even some smaller 4 or 6-channel interfaces often include at least one ADAT expansion option (8-channel), allowing those more basic boxes to easily bump up their i/o without having to reinvent the wheel, a welcome option for less-technical DAW users.

The expansion device need not be a dedicated interface itself. There are many 8-channel preamps with ADAT outputs, which can often be had for less than the cost of a full-blown interface, sometimes bringing high-end mic preamps to the party.

Connecting an 8-channel ADAT-equipped i/o expander device is a simple two-step operation—step 1 is just to plug it in. If all you want or need is 8 more inputs, then even a single fiber-optic ADAT cable from the expander’s ADAT Out to the interface’s ADAT In will do the trick. For additional outs as well, a second cable from the interface’s ADAT Out to the expander’s ADAT In will complete the hookup, for the full 8-channel i/o.

But there is one more step required, and it’s a very important one—clocking. The circuitry that manages the flow of digital data in all digital audio streams is controlled by a very precise, very stable high-quality clock circuit. Every individual hardware device that processes or transmits digital audio—DAW, audio interface, AD Converter, even a digital effects unit—has such a clock. When digital audio is passed between devices via an ADAT lightpipe connection, the two clocks—the interface’s and the expander’s—must be sync’d, or the digital audio may be rendered as a loud blast of digital noise! (It can be jarring if the volume is cranked up, and loud enough to blow a speaker—or hopefully just a fuse.)

Fortunately, the ADAT standard makes this easy. The ADAT cable itself carries the necessary clocking signal along with the digital audio data, so for simple hookups no extra cabling is required. What is needed is for you to determine which device will be the master clock—all other devices must be set to sync—or slave—to that clock, ensuring the proper transfer of digital audio. Typically, the expander feeding audio into an interface via its ADAT output might be set as the master, by setting the receiving device—the interface—to sync to that incoming clock. So the expander’s clock would be set to “internal” and the interface’s clock would be set to “ADAT”. With full two-way i/o, the either device could serve as the master clock. 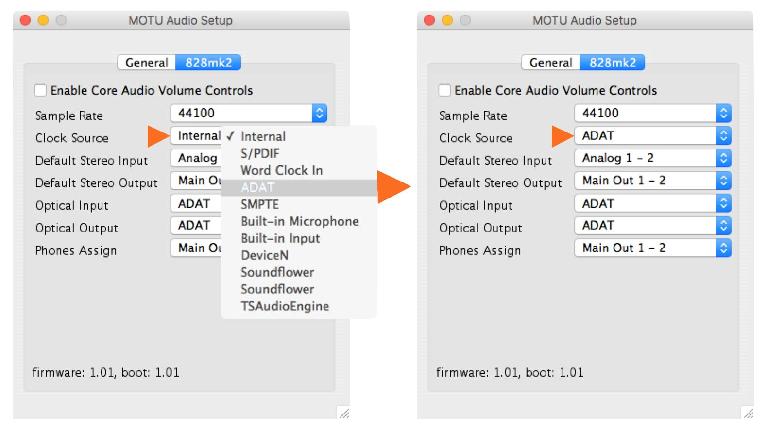 For very large systems, clocking could be handled via a separate connection, using a dedicated master clock device outputting a “Word Clock” signal, distributed in parallel to all boxes. All devices would need additional Word Clock i/o to be sync’d this way, selecting “Word Clock” instead of “ADAT” for all clocks. However, that’s a bit outside the scope of this article, so I’ll stop with the basic—and much simpler—ADAT clock method.

ADAT expansion is a simple, reliable way to bump up a DAW’s i/o, but for Mac users there is another option. In the Audio MIDI Setup utility, you can combine two or more interfaces—including the Mac’s own ins & outs—as an Aggregate Device. This presents the aggregated devices as a single interface to any DAW, allowing for the combined i/o of all. It’s easy enough to set up, but a quick caveat: some people have reported occasional issues or instability using Aggregate Devices, though I’ve never had problems myself.

If you do want to set one up, you can create a new Aggregate device via the “+” button in Audio MIDI Setup. Then you simply check the devices you want to combine—you can choose which will serve as the master clock via a popup menu at the top. Give the new Aggregate Device an appropriate name, and then select it as the preferred interface in the Audio Preferences or Setup window of your DAW...and Bob’s your uncle! 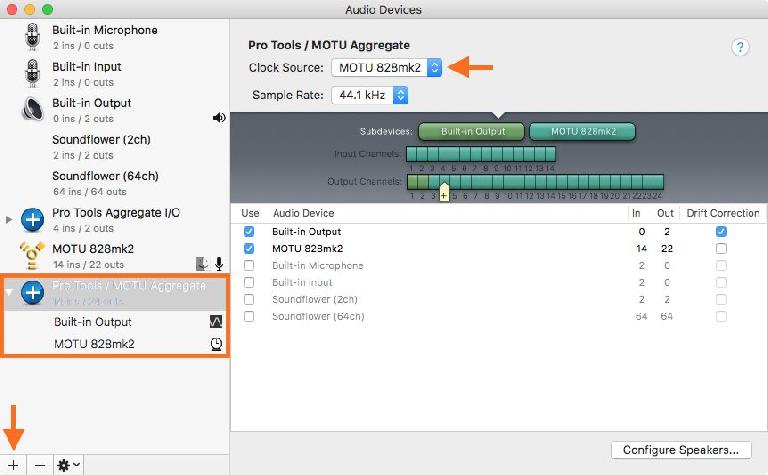 In the illustration above, you can see an Aggregate Device the combines the built-in Mac output with a MOTU 828 8-channel interface. (This was created so I could record video/audio (for my video courses)—which requires using the built-in output—of audio recordings being made in Pro Tools via the 828’s inputs.) But you can easily combine multiple external interfaces as well, providing an alternate way to extend i/o with interfaces that don’t include ADAT connections.

As I pointed out earlier, there are other ways to combine or network suitably-equipped higher-end interfaces, but between the ADAT lightpipe standard and the (Mac) Aggregate Device option it should be easy enough to pump up the i/o of most any small-to-medium-sized DAW system, building up the channel count as your sessions grow.

Learn more about audio recording in any and every DAW: https://ask.audio/academy?nleloc=new-releases

Jorge G
Hello everyone! What would you recommend to expand In/Out ports considering that you have 2 interfaces with ADAT and MacOS? ADAT connections or Aggregate Device?