Language
Twisted Tools have always been on the cutting edge when it comes to creating music tech. Their latest Reaktor ensemble lets you remix up to 128 loops in real time to create something amazing.

Every few years, a plug-in, or a feature in a DAW will come along that changes the way we do things. For example: I remember the year that Propellerhead announced the Combinator. It was a such a basic idea, combine instruments and effects to get a bigger instrument and effect. Yet, though the concept was so simple, it prompted several other developers to scramble to come up with their own version. It made a huge wave. Another example would be the year iZotope's Stutter Edit was announced. People went crazy, as it filled a niche for producers, quickly and easily.

This year, I got an exclusive look at, what I believe, is the new killer app/plug-in, which is coming in the form of a Reaktor Ensemble. And, let me tell you, this will probably be one of those effects/instruments that is going to cause a stir. It is going to be copied, it is going to change things for people, yourself included, if you can get your head around it. This is where my job comes in.

"Ultraloop will probably be one of those effects/instruments that is going to cause a stir."

Okay, 'he who has ears, let him hear'. Ultraloop is not technically an effect, nor is it an instrument. It takes advantage of a very popular producer trick used in house, dubstep, glitch, and many other forms of music, known as comping. You probably know this trick from Reason, Pro Tools, or Logic Pro. You'll have several tracks running in a row. You choose segments from those several tracks that will be heard, and what won't, so that you build the ultimate take.

"The end result is tweaky, mind bending, rhythms, that come about through carefully choosing small snippets."

This trick, like many other tricks, has been exploited in dance music to the extreme, by artists like Skrillex, Deadmau5 and so on. You can get tricky with it. Have 8-9 tracks that play in the same key. Some tracks have drums, some have synths playing whole notes, some have vocals. What you'll do is select portions of what will be heard, and what won't, like you're comping. The end result is tweaky, mind bending, rhythms, that come about through carefully choosing small snippets.

So, for the 'bottom liners', Ultraloop is a Reaktor Ensemble that lets you build sick, crazy loops by comping between 128 different loops at once, in real time. It comes with tons of loops, and also allows you to bring in your own. Remixing has become that much easier. 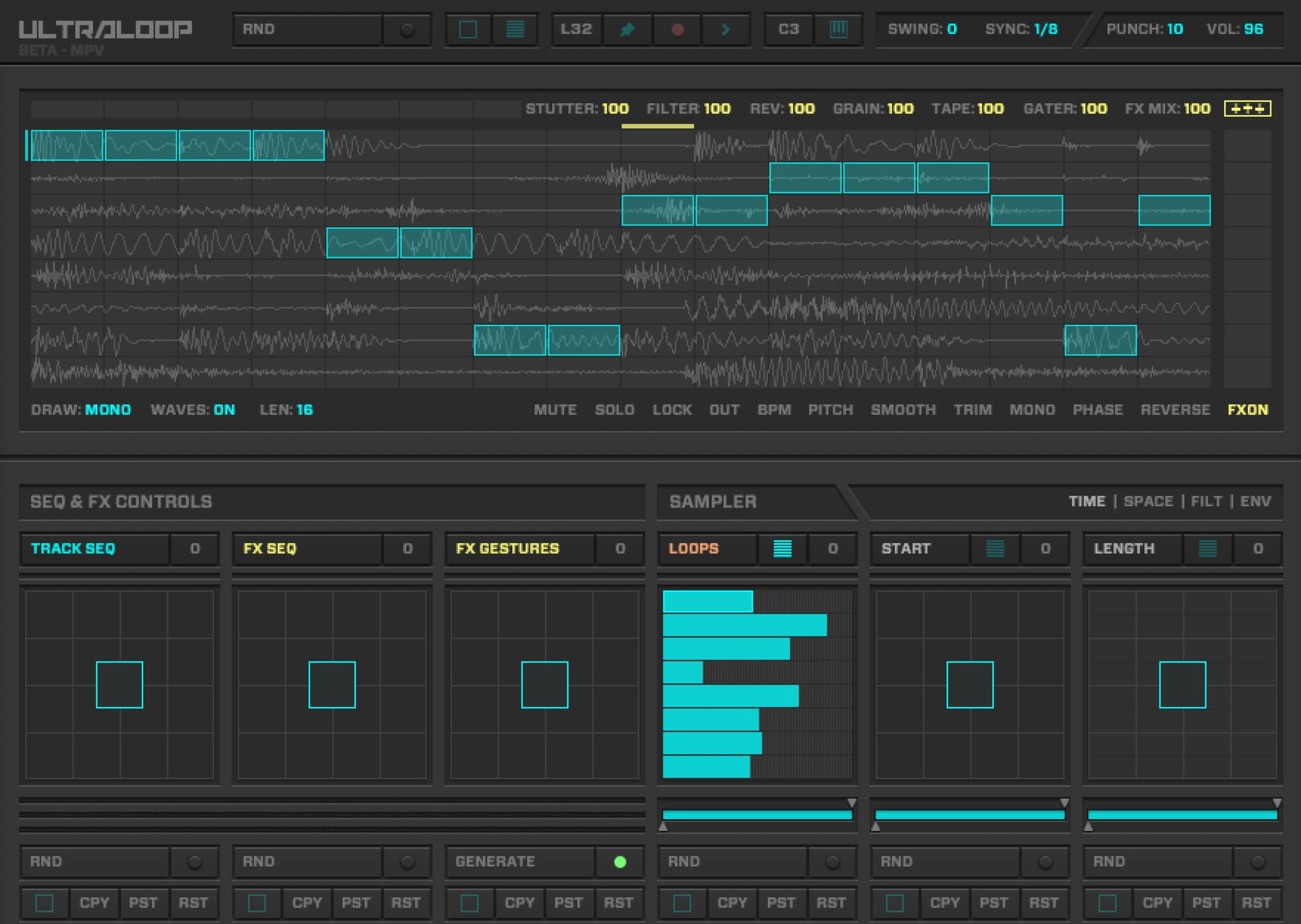 How Does it Work?

In the uppermost portion of Ultraloop, you'll find 8 waveforms appearing. These waveforms are loops that have been loaded into Reaktor's sampler. When Ultraloop starts, all the samples are playing at once. But, only the blue, highlighted portions of the loops are audible. You click on portions of the loops, and blue segments will appear. These blue boxes, annotate that this portion of the loop is now audible. What's not blue, cannot be heard.

By default, Mono mode is enabled. This means that a blue box can only be on one loop at a time, in any particular instance. Meaning: I cannot have two, or more portions of a loop playing at once. This eliminates the possibility of nasty walls of noise. But, for those of you that want the nasty wall of noise, there is a Poly mode, where you can stack loops. 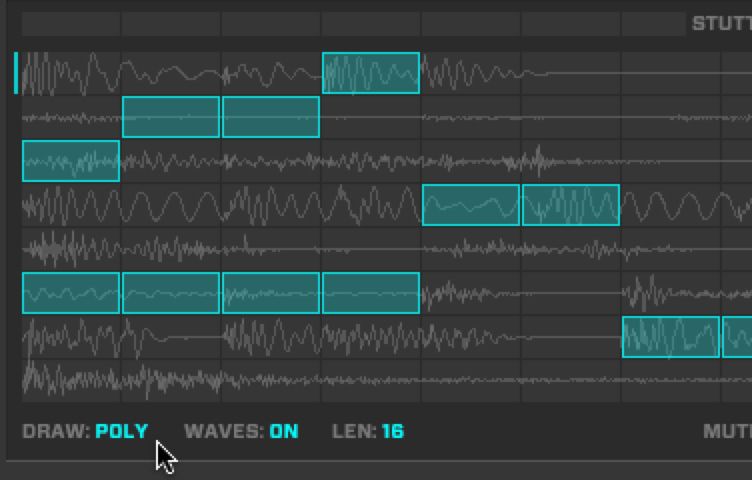 Okay, so this part is cool. But, it gets even more intense... Within each of the eight visible lanes, you can also set it up where certain lanes/loops will play in reverse. Or, only a portion of the loop. Some lanes/loops will be in half time. You can also adjust the attack, decay, and release of different loops on the fly. It even fades in and crossfades between different loops for you. This takes away from having to do hours of automation and comping... If you want.

It Gets Even Deeper...

If all this wasn't enough, Ultraloop has gone even farther. Below the loops, you'll notice several boxed areas that contain other small boxes, or nodes. By switching to different nodes, you instantly switch to either new loop combinations, loop patterns, effects patterns, attack and release patterns, and so on. 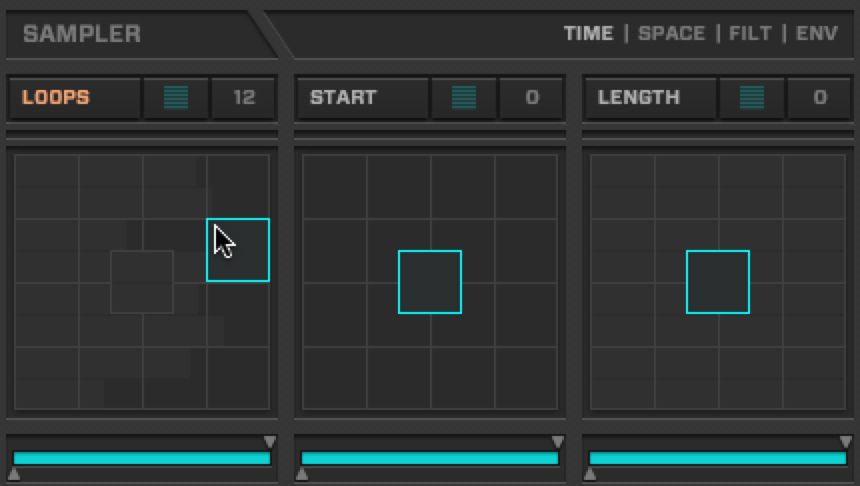 So, for example: in the Sampler section, I have one box (the Loops box) that controls what loops, out of the 128 loaded in the sampler, will be available in the 8 lanes above. I can switch between this loop selection, simply by switching to a different node, within this box. 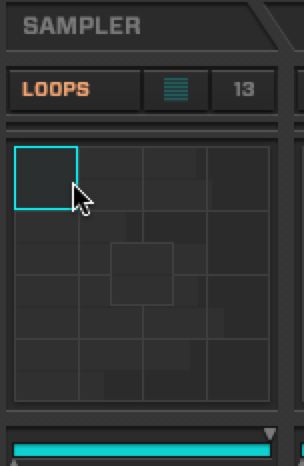 There's another box that controls the start times of the loops and another that controls the length. Imagine being able to choose lengths on the fly, or have up to 128 patterns of different loop lengths, attack times, panning, effects. It completely gets rid of long hours of editing, by macroing these kinds of edits in. And, because this kind of comping, panning, editing, looping and automated effects are in there with computer precision, inherently, well things just sound good.

"Aside from being the comp king of the century, Ultraloop is also a black box of instant gratification on the effects side of things."

Aside from being the comp king of the century, Ultraloop is also a black box of instant gratification on the effects side of things. Ultraloop, for simplicity's sake, controls what effects occur in percentages, similarly to DB Glitch, Stutter Edit, etc. You can choose what percentage Filter, Reverse, Tape, and even Stutter effects will occur. But in the end, Ultraloop chooses when these effects will actually happen. And how do they sound? Oh, they are sick. The guys at Twisted Tools were very aware that they had something amazing in Ultraloop, when they started on it. So, no expense has been spared. There's even a Lemur Template, already.

Ultraloop is as deep as they come, in terms of rabbit holes. You start playing with it, you seriously can't stop. As soon as you wrap your brain around it, you already have 20 other ideas. This can literally change your music production experience.

But, it's not perfect. It is hard on your system memory. As soon as you load it up, in Reaktor, you will see your memory drain away, quickly. It stores all those loops in your system memory. So, get ready to pick up more RAM, if you're serious. Also, if you've never dealt with the Reaktor sampler, you will have to start. But, if you're looking to take your production up several levels, this is $69 dollars well spent. Even if you don't use Ultraloop all the time, what it teaches you to do is worth the money, on its own.

"Even if you don't use Ultraloop all the time, what it teaches you to do is worth the money, on its own."

Personally, I could see myself running a second computer just for Ultraloop. You can run it stand-alone in Reaktor, it accepts MIDI control over scenes, effects, and even loop selection. So, with either my Lemur, or my Livid Base, I'll be able to sonically wreak havoc in a way never before. And, if I'm telling you I'm thinking about dedicating a computer to just Ultraloop... Well, you get the idea... This is seriously good.