So you may have a basic idea of what a VCA is and what it does, but wouldn't it be great to be able to really get the most out of them? Here's Scott Riesterer with some lesser know uses for them.

If you’ve spent any time investigating the world of eurorack, reading through threads on the muffwiggler forum, watching videos from Richard Divine, Mylar Melodies, DivKid and the growing roster of eurorack YouTubers out there, chances are high that you have come across the sentiment that you can never have too many (or enough) VCAs. Depending on your experience with synthesizers, this may seem like either an odd or completely self evident statement. In any event, it’s worth taking a look at what VCAs are, what they do, and why they are so important to any eurorack system.

Just to make sure we’re all on the same page from the start, a VCA is a voltage controlled amplifier. Basically this means that it uses a voltage signal to control the amplitude, or volume, of a second signal. The most common use it provides is to shape the volume of a synthesizer voice using an envelope. You strike a key, the key triggers a gate which launches an envelope, and this opens the VCA so we hear the note. The shape of the envelope dictates whether the note is percussive and abrupt, or if it swells in and eases out slowly. Without a VCA, the synth’s oscillators would buzz away ceaselessly at full blast unless you manually manhandled the volume knob.

In a fixed architecture synthesizer like a Roland SH-101 or a Moog Sub37, this functionality is built into the design of the synth so the user doesn’t have to think about this chain of cause and effect. Dedicated envelopes are provided to shape the volume contour of the VCA so the user can either play short percussive stabs or slow swelling pads. In a eurorack system this is not the case and this pipeline has to be patched together. However, this necessity creates some interesting options and alternatives. Furthermore, the various VCA designs available can often provide unique functionality and character not possible with fixed architecture synths. For example, the Intellijel Quad VCA has a cascading architecture, meaning that each CV input feeds into the following input, and similarly each output feeds into the next output. This means that you can use both an LFO and an envelope, or even up to four CV inputs to control the volume of a signal, or you can use one envelope to control and mix together four oscillators.

If an envelope is controlling the amplitude of an LFO, this means that the LFO modulation will take on the contour of the envelope. This can be useful to have pitch or filter wobbling gradually fade in after a note has been struck and sustained. Conversely, you could use a sharper envelope controlling a fast LFO to introduce bell-like or squelchy frequency modulation at the start of a note that quickly fades into a more stable tone. This also allows you to trigger modulation to take effect at certain regular (or irregular) intervals using things like clock dividers or function generators.

With a slow LFO controlling the amplitude of an envelope, you can have your notes gradually swell and dip in volume to create crescendo effects. Or you could use that slow LFO to control another LFO to introduce rhythmic tides of filter or frequency modulation. Of course gates can also provide the CV input for VCAs in order to regularly open and close a signal. Furthermore, that signal gated by the VCA could be a series of gates triggering something else! I recently heard a neat trick of running a regular sequence through a VCA and using irregular gates from another source to pop the melody in and out.

An LFO controlling the amount of frequency modulation one oscillator imposes on another via a VCA. 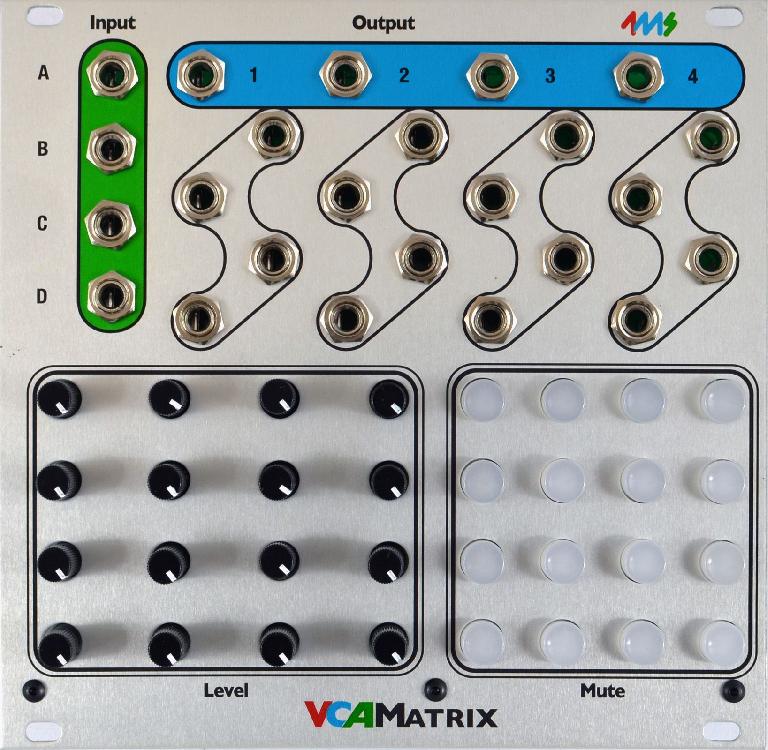 Setting up effect sends can be another fun way to use a VCA. To accomplish this you will have to multiply your signal so you have a dry version, and you will create the wet version using the VCA with the output sent to the effect. In this case the control signal will determine the amount of signal sent to the effect, and then you can blend it back together with the dry signal. This works great with reverbs and delays, but it’s worth trying distortions, bit crushers and whatever other effects you have at your disposal. Using sends and returns instead of plunging a signal directly into effects makes it easier to create melodies or grooves that evolve and change without losing the vibe of the original material, plus it can give you more flexibility with panning and mixing.

Using a slow triangle wave LFO to control the signal level of an oscillator will make it swell and dip in volume. Speed it up, and you’ll get a warbly tremolo effect (as opposed to vibrato which relates to pitch). If the LFO speeds up into audio range, or another oscillator is used to control the amplitude of an oscillator, the dips in volume will cut off the oscillator's wave shape before it can complete a cycle. This changes the oscillator’s wave shape, which in turn can cause a metallic change in timbre similar to ring mod.

An LFO modulating amplitude slowly, then into audio range. 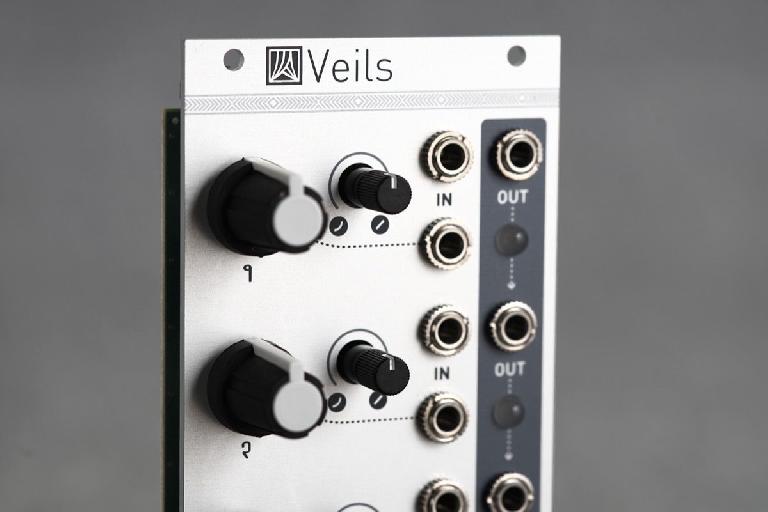 This isn’t so much a trick or technique, as a useful bit of knowledge that is not often explained in plain english. Most VCAs are linear, but some are exponential, and many offer switches or knobs to introduce exponential or logarithmic modes. This is referring to the CV response of the VCA. A linear VCA will respond to incoming CV in a linear fashion and raise or lower the volume of the signal accordingly. Meaning that what goes in is directly related to what comes out. Exponential or logarithmic VCAs will deviate from this one-to-one response with curved, skewed responses. Exponential curves initially rise more slowly, then abruptly sweep up. The result is that this produces a more spiky sounding response. Logarithmic curves initially rise more quickly, then round off, which will in turn create responses that quickly rise from zero with a less smooth transition. 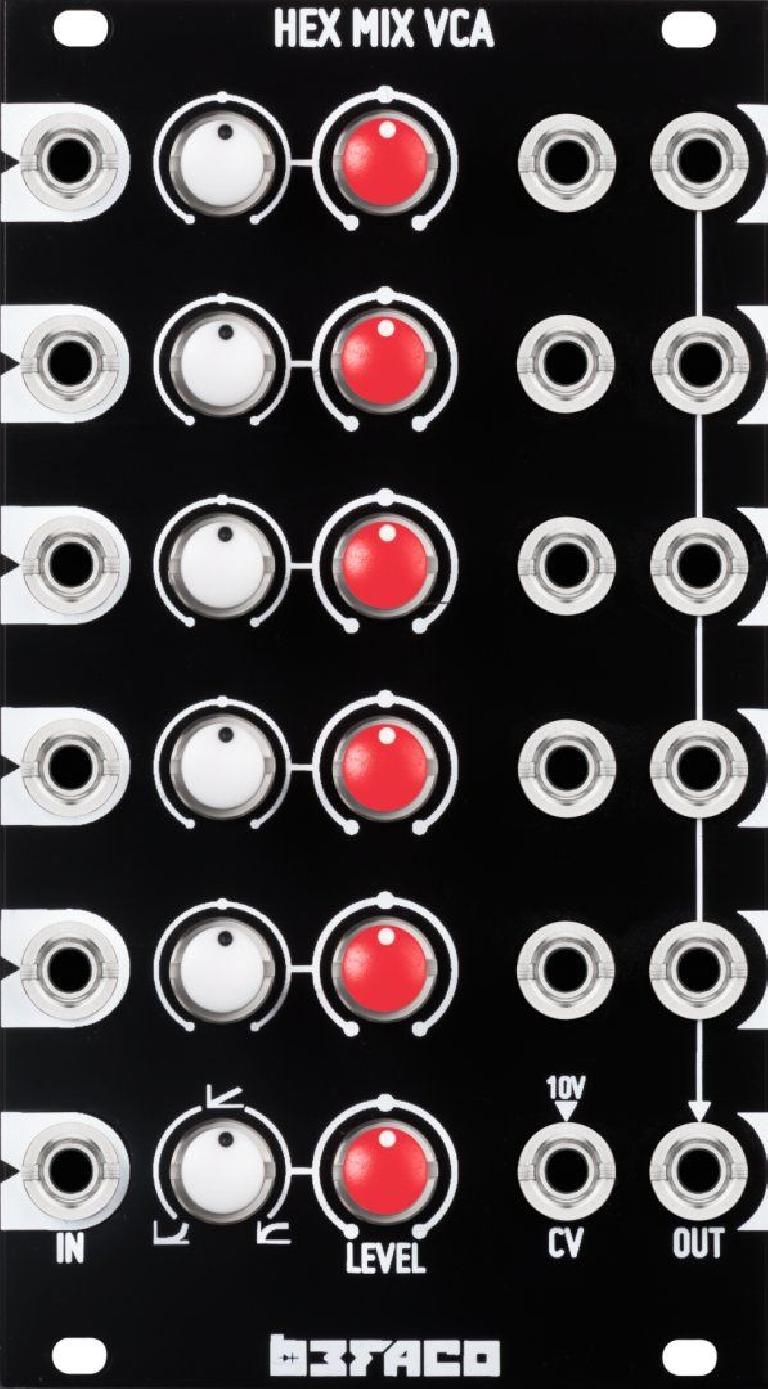 The Befaco Hex VCA can sweep between logarithmic, linear, and exponential responses.

VCAs might not be the most exciting or sexy modules, but they are undeniably useful. Learning how to use them for more than just controlling the volume of oscillators opens a pretty vast Pandora’s box of possibilities. Hopefully this article gave you some ideas to take further advantage of your system, and provided some new things to try. Also, if you have any cool VCA tricks or techniques I’d love to hear about them!

Lastly, Intellijel put out a video walkthrough of their Quad VCA that illustrates some of the techniques I’ve described, so it’s worth a look. You can check it out here:

Check out these excellent synthesis courses in the Ask.Audio Academy on VCA's by Marc Doty and eurorack with DivKid.