Endlesss: The Future Of Collaboration For Music Producers?

Seamless online collaboration is the holy grail for many music producers, and Tim Exile's Endless could be the first system to have achieved it. Noah Pred finds out how.

As hardware and software development continues to accelerate, producers often find themselves more alienated than ever: holed up in the studio for days on end in self-imposed exile, delving ever deeper into their own sonic bubble.

A far cry from the traditionally social context of music prevalent throughout anthropological history, this comparatively anti-social approach can certainly yield results for some – though it doesn’t exactly foster the sort of collaborations that musicians have so often relied on to enhance their offerings.

Cloud-based solutions such as Gobbler, Splice, and even storage behemoth Dropbox have attempted to make collaboration easier, but none of them offer anything that could be construed as “real-time” collaboration.

In stark contrast – and with stunning success on their unofficial beta – accomplished sound designer, musician, and technologist Tim Exile’s Endlesss mobile app has somehow attained this holy grail: enabling real-time collaboration with other musicians and producers across the globe. 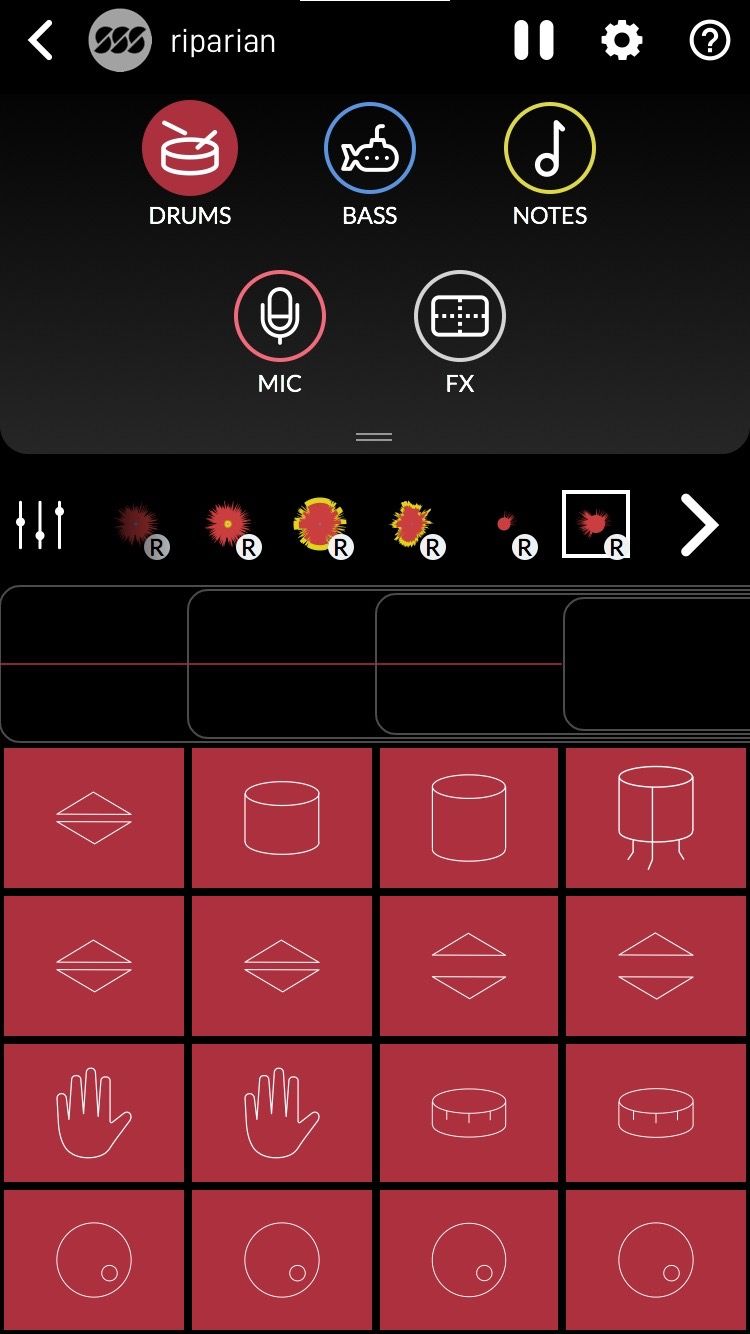 Selecting Drum instrument from the home screen for a new Jam.

The Endlesss paradigm is based on Jams: creative sessions open to one or more participants. You can join an existing Jam, or create your own; these are the virtual session rooms where collaboration takes place. When a private Jam is created, you can invite your contacts to join – or you can create a public Jam for total strangers to join the fun. 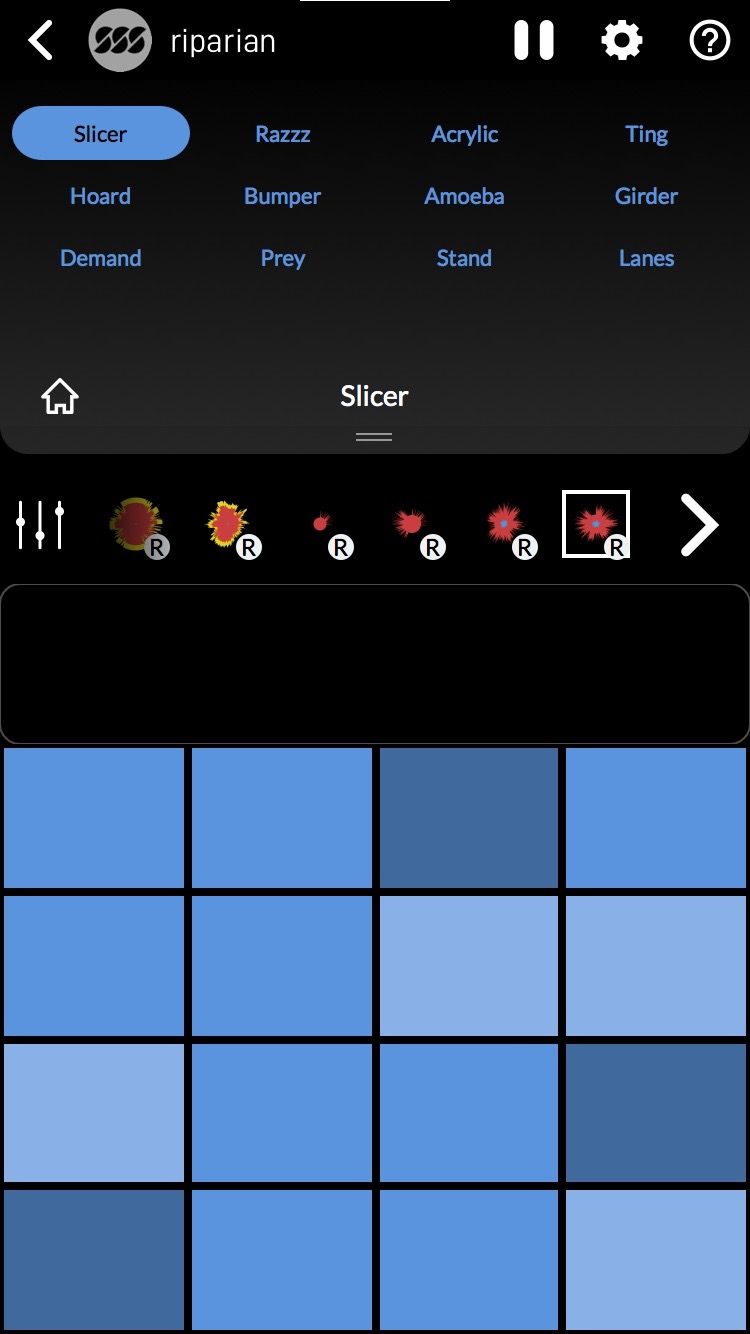 Getting set for a Bass Riff.

Once up and running, Jams are built on Rifffs: musical building blocks that can be stacked and layered. The five core elements currently available for Rifff takes are Drums, Bass, Notes, Mic/Input, and a unique multi-effects pad. Effects can be applied globally to an entire stack of Rifffs, or to individual Rifff components separately. Rifffs can then be remixed through new layers and/or effects by anyone with access to the Jam. 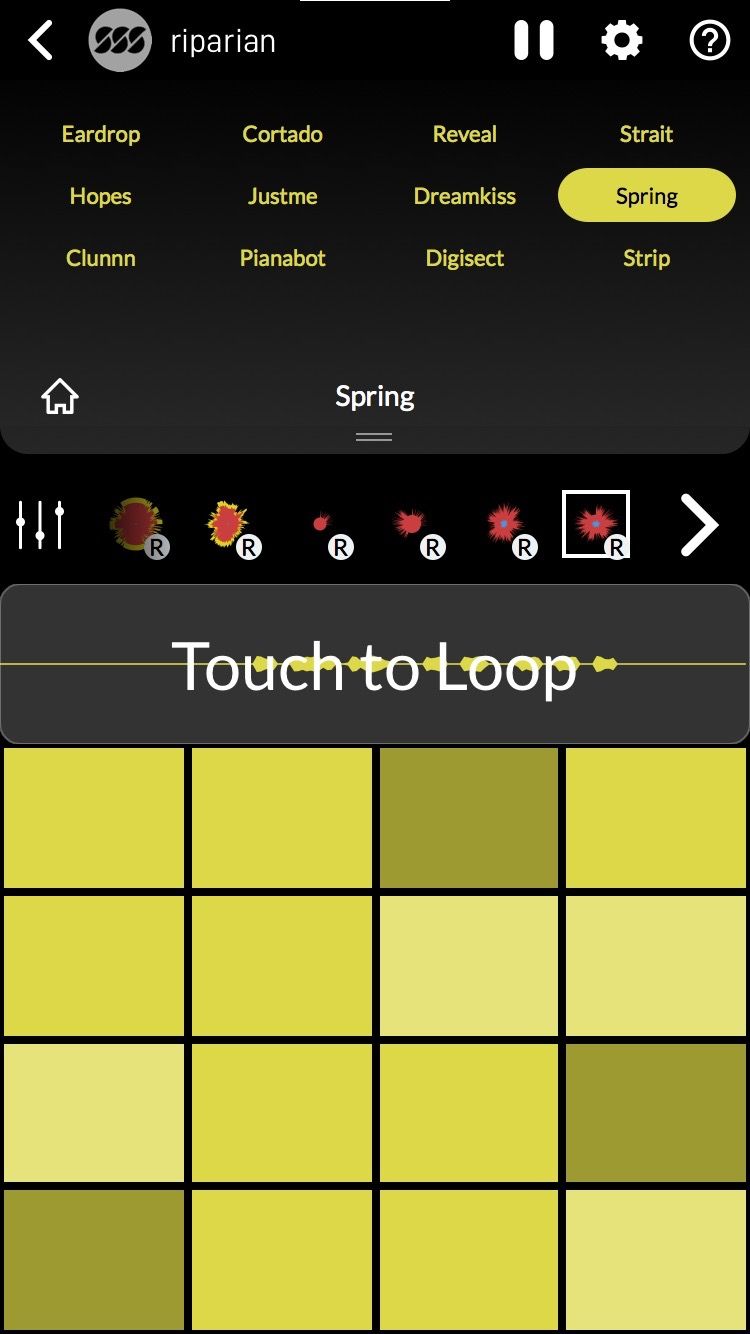 A global Settings screen allows for tempo control, note scale, metric quantization, and other core settings such as Link – so Endlesss is already set to synchronize with other mobile apps and DAWs via Ableton’s open-source wireless protocol. 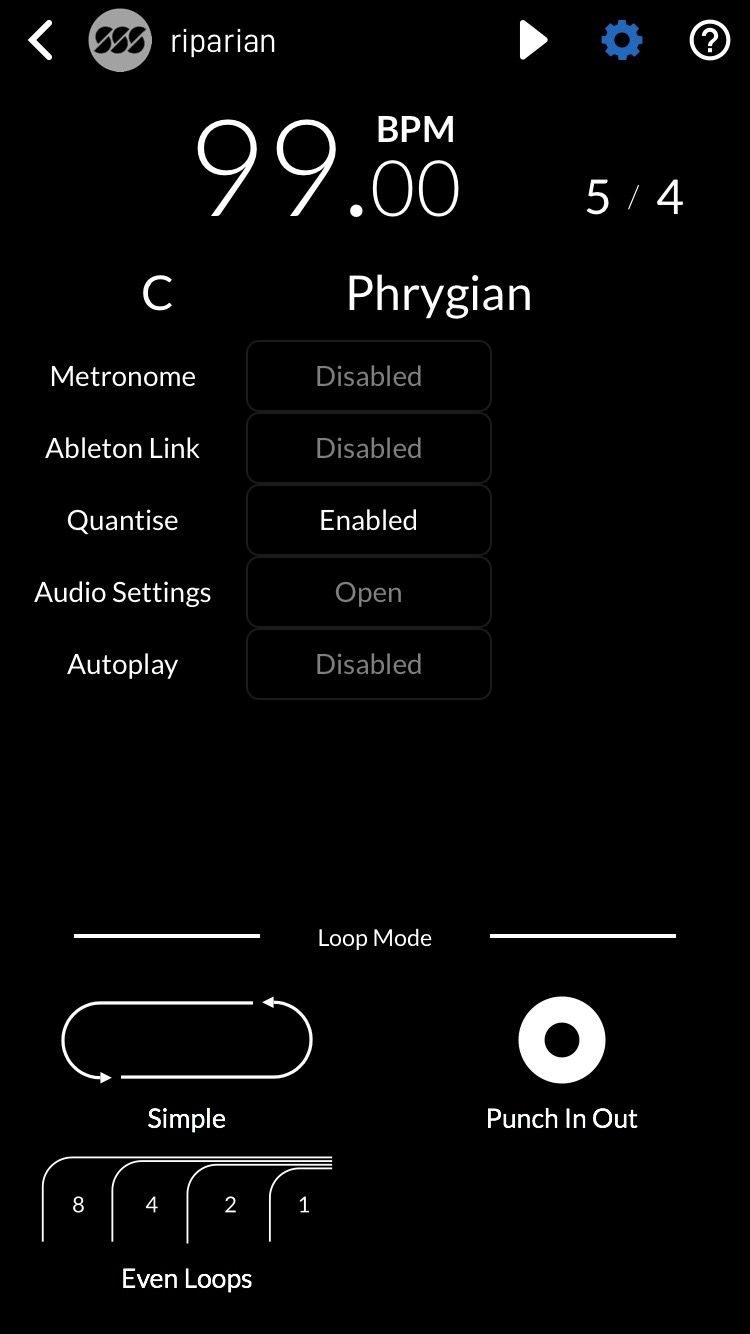 Speaking of DAWs, Endlesss offers full audio export, so anything you write on the go or that comes out of a Jam can be used for production. Fully lossless export will eventually require a paid subscription but currently lo-fi export is available in the free beta. Using its own proprietary event coding system, Endlesss doesn’t feature MIDI export yet – though this may be in the works for a future version. 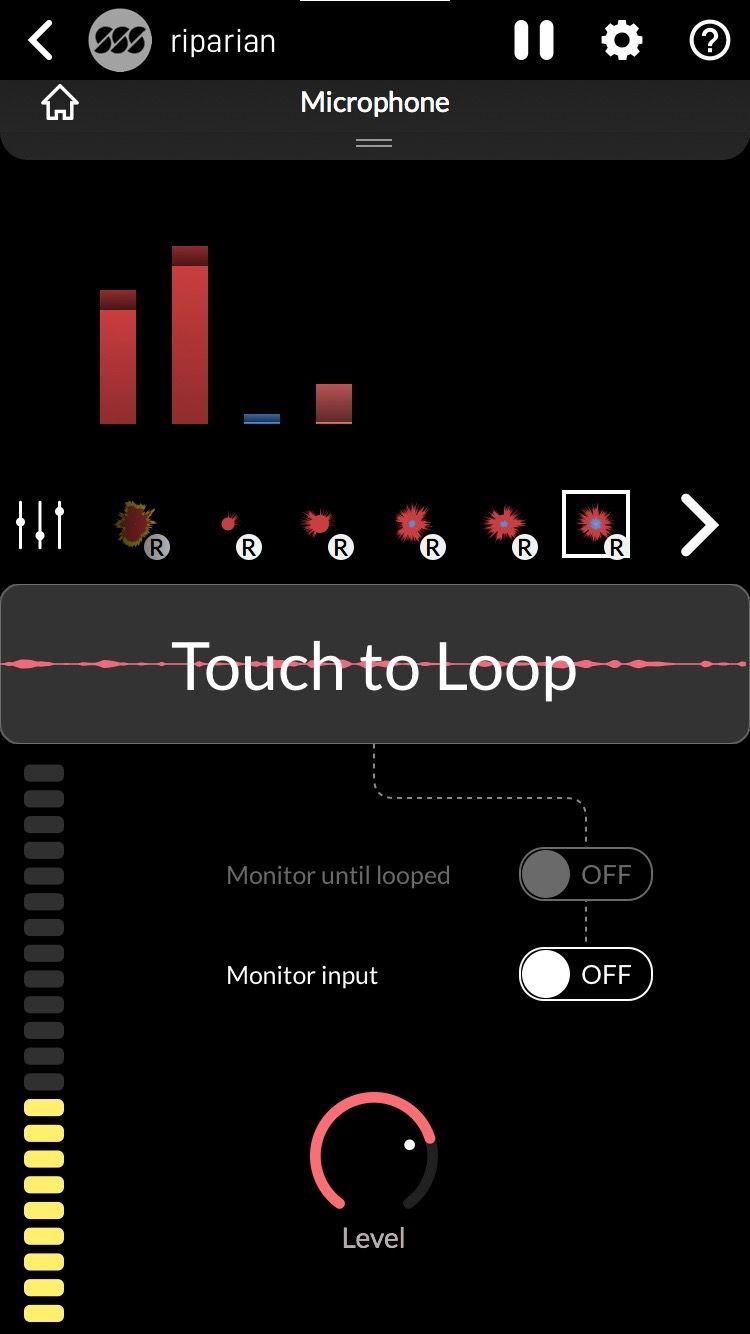 Intuitive to navigate, the default Rifff invitation presents a familiar sixteen-pad interface with an array of sample-based drum kits to choose from. Tactile, real-time playback quantizes instantly at the global BPM, initially set to 120.

Without the optional click track switched on, it’s a bit unnerving at first, but doesn’t take long to get used to. It’s actually a great way to start getting ideas down without the pressure of a metronome; most of the time it nails the downbeat automatically, but in rare cases where it doesn’t, I found it led to unexpectedly compelling polyrhythms – a nice way to break the monotony of convention. 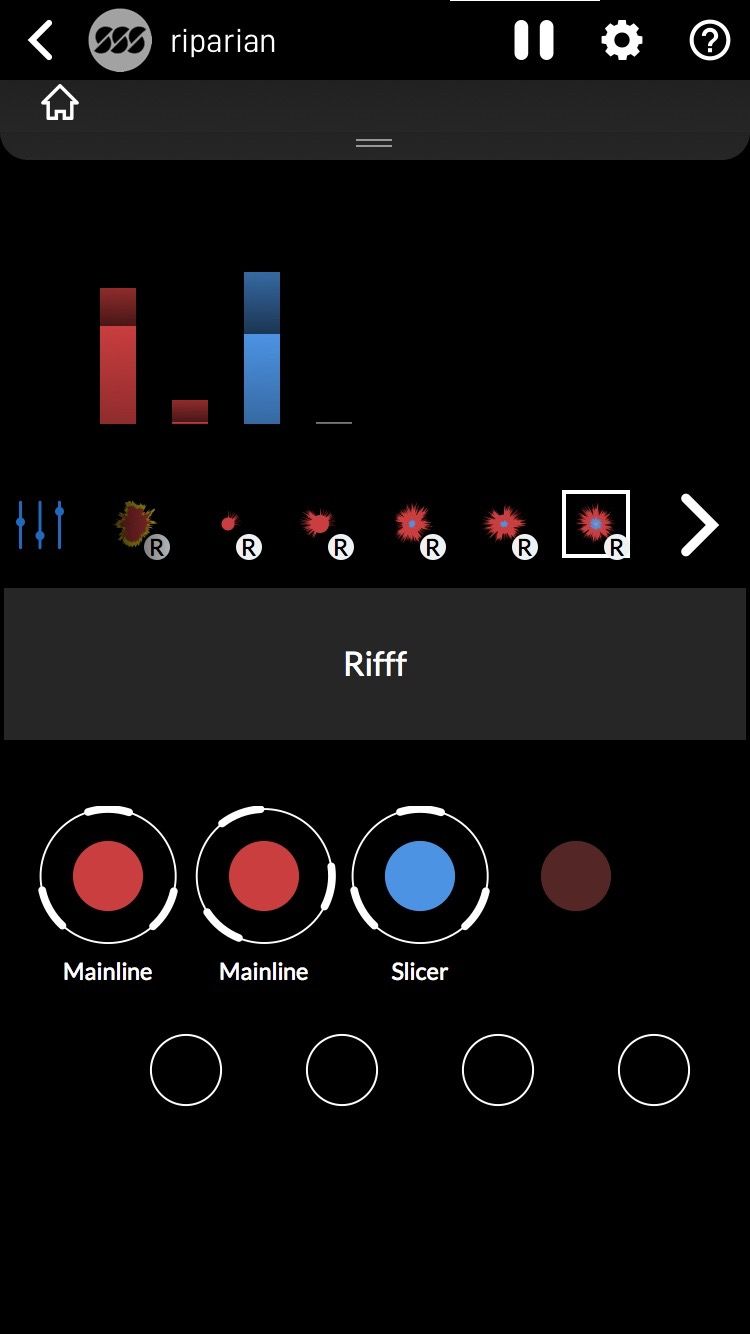 The Mixer panel, with Mic part muted and the second Mainline part turned down.

Both melodic components – bass and “notes” (intended for melodic and harmonic elements) – are presented in a scale-quantized sixteen-pad configuration. The limited sound presets available provide a decent selection of starting points for now, with new sound expansion packs due with imminent updates.

When selecting the Mic input, a dialogue urges headphones to avoid bleed. I’m not much of a singer, but this is where the wide array of fairly drastic effects come in: a few tweaks to a random utterance and I’ve morphed my voice into a menacing, psychedelic texture.

There’s no ability to adjust sounds at the instrument level, but the individual effects – from standard filtration, delay, and reverb to extreme creative manglers – provide ample opportunity for manipulation. A mixer page blends it all together, while allowing for muting of various Rifff instruments to test out new combinations. 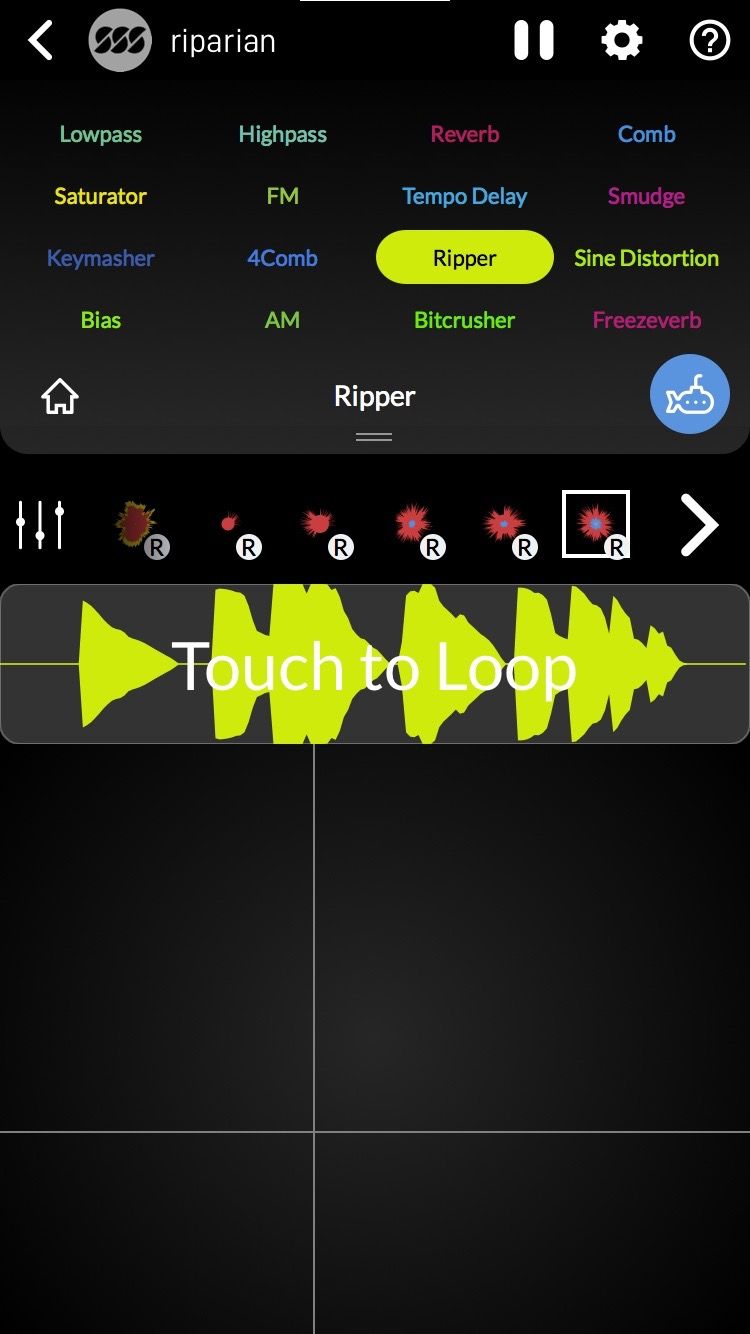 Applying the Ripper effect to just the Bass part.

Rifffs can be looped by punching out via tap, fixed at even intervals of up to eight bars via tap, or looped at a fixed interval set in advance. By design, Rifffs can't be edited, forcing users to commit and move on, which actually serves as a welcome creative limitation. But fear not: Riffs are non-destructive, with all prior Rifff versions catalogued chronologically in a Jam’s history.

According to Exile, Endlesss was envisioned as a “Whatsapp for music”. With real-time chat soon to come and large-scale public Jams already in full swing, it certainly has the potential to bring music production into the social sphere like never before.

The few private jams I managed to join were a giddy experience: seeing a friend’s new Rifff appear on my phone, toggling between them and adding in my own edit was honestly a bit of a rush. With push notifications available for when someone adds a new remix of a Rifff or Jam you've contributed to, Endlesss provides an enticing new way to keep in touch with musically-minded friends. 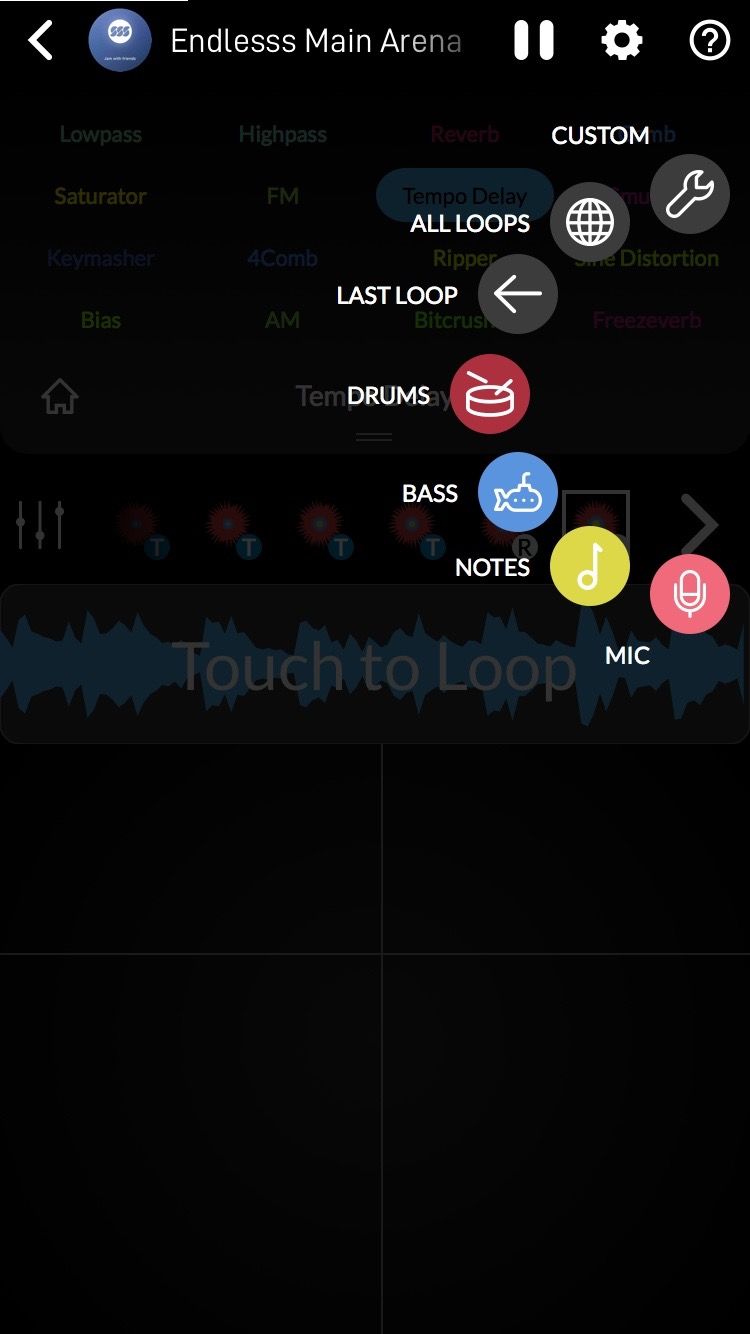 Selecting which Rifff layer to mangle with effects in the Endlesss Main Arena.

The public Jam experience is somewhat dizzying, mostly in a good way – though the groundbreaking format raises a host of questions Endlesss is in the process of answering. How can ground rules be established for public Jams to prevent ideas from being “stolen” without permission? Could atonal, non-quantized sonic “shit-posting” become a concern?   Nevertheless, the possibilities presented are fascinating: a new forum to share and spread musical ideas with as much or as little filter as you might want.

Clearly Endlesss has struck a chord: their beta launch already generated so much traffic they’ve been forced to scale their cloud hosting by a considerable amount far ahead of schedule. And it’s not hard to see why – the immediacy and connectivity Endlesss provides is a clear antidote to the alienation unintentionally imposed by conventional music technology.

While many of us take for granted the ability to use laptops for music production, many musicians around the world can still only dream of calling a computer their own. In this regard, Endlesss helps eliminate boundaries for music-makers who only have access to a phone.

Facilitating music creation as a live, real-time, interactive event, the Endlesss team envisions it as a playground for like-minded musicians and producers to transcend both technological and geographic limitations, paving the way for otherwise impossible collaborations – and even providing a platform for established artists to present their work (and process) in new ways.   At the same time, Endlesss can be a powerful tool for professional producers. Whether generating solo Rifffs on the go for eventual audio export and DAW deployment or sharing ideas with far-flung collaborators, the value of Endlesss should be apparent to music-makers of all backgrounds and aspirations.   With a new design interface, intricate Jam curation options, sound expansion packs, chat features, and even a companion VST for seamless DAW integration on the way, the future seems Endlesss indeed.