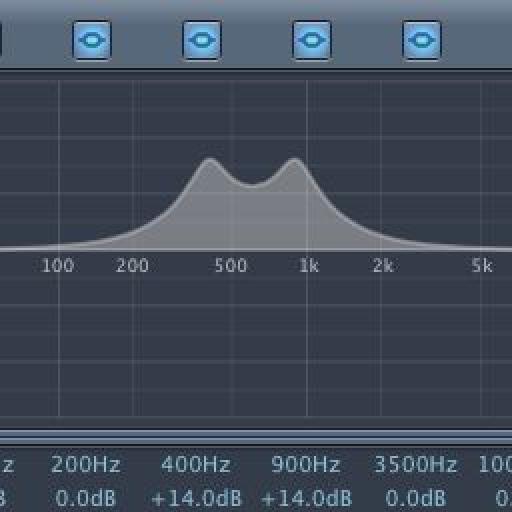 Language
Continue your week on a groovy note! (sic) with the second of this two-part tutorial on creating an EDM House Groove using Logic Pro by Darren Burgos.

This is the second half of the two-part Electro House Groove in Logic Pro article. In this half we'll be working on the bass sound. You should have already worked out the drums in part one, before proceeding with this second half.

Add a new software instrument to your project and pull up an ES2. Select the “Analog Bass Clean” preset from the Tutorial Settings menu. 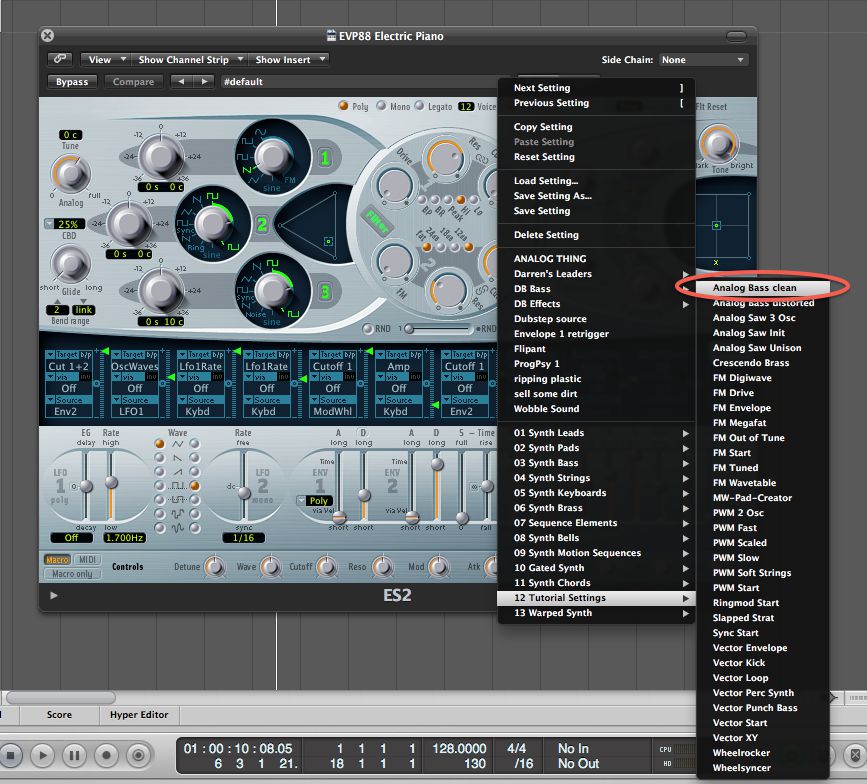 Let's start to edit this preset. First of all, it only uses one of the three oscillator, and it's a Square Wave. So let's switch it to a Sawtooth for a harder grittier sound. 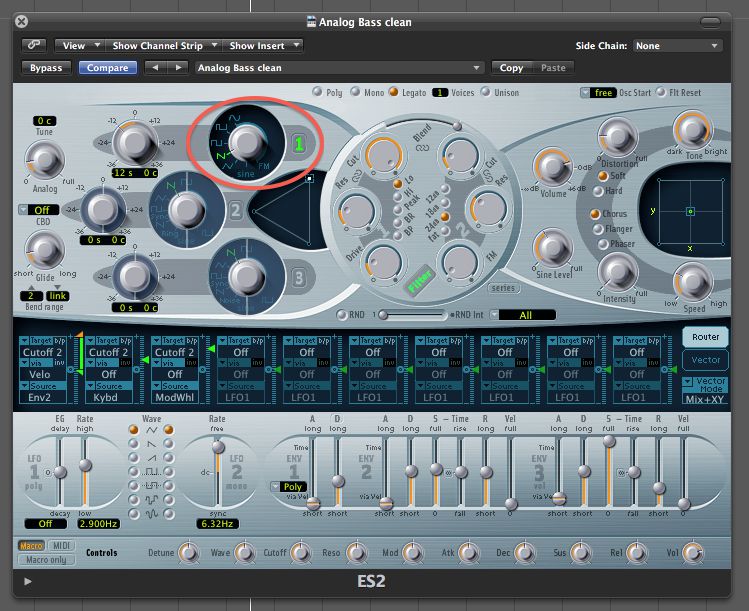 Next, set the Glide straight up to around 640ms. 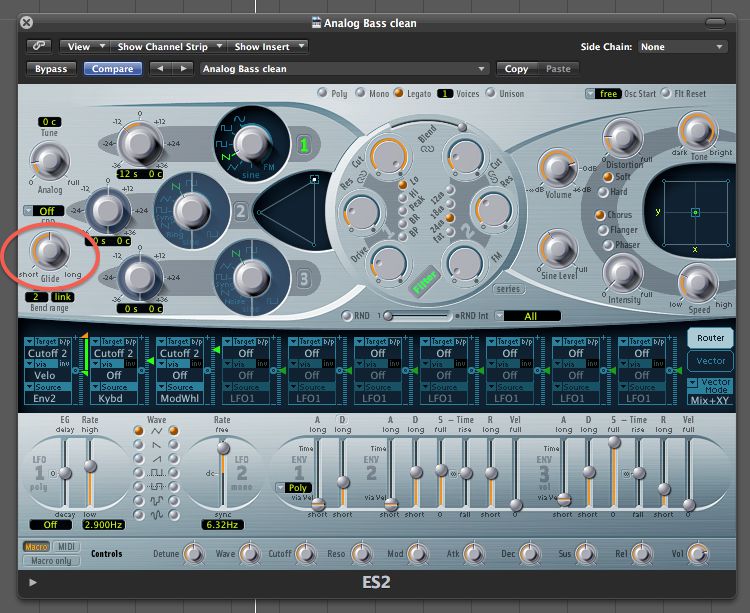 Slide the filter blend all the way over to the left so it's only using the Filter 1. The Cut Off and Resonance parameters are set correctly, but push the Filter Drive all the way up. 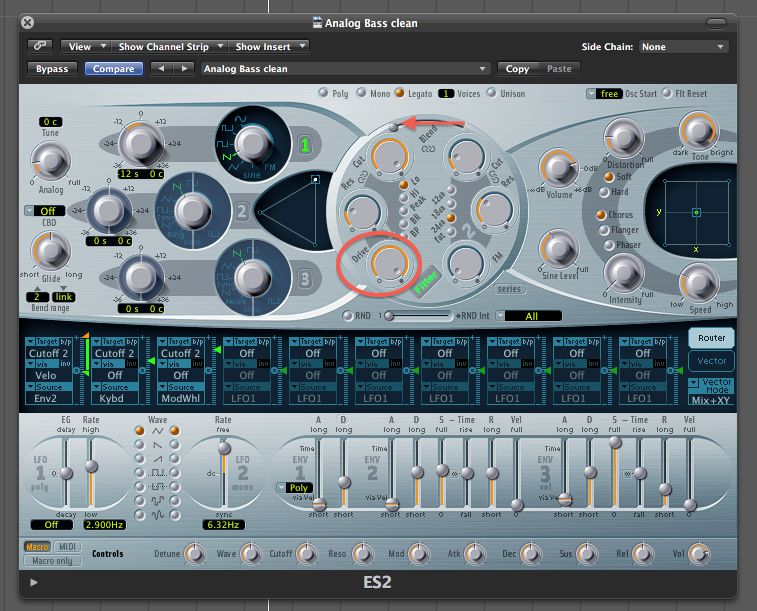 Step 5 - Set the Distortion in the Effects Section

Push the Distortion knob all the way up. 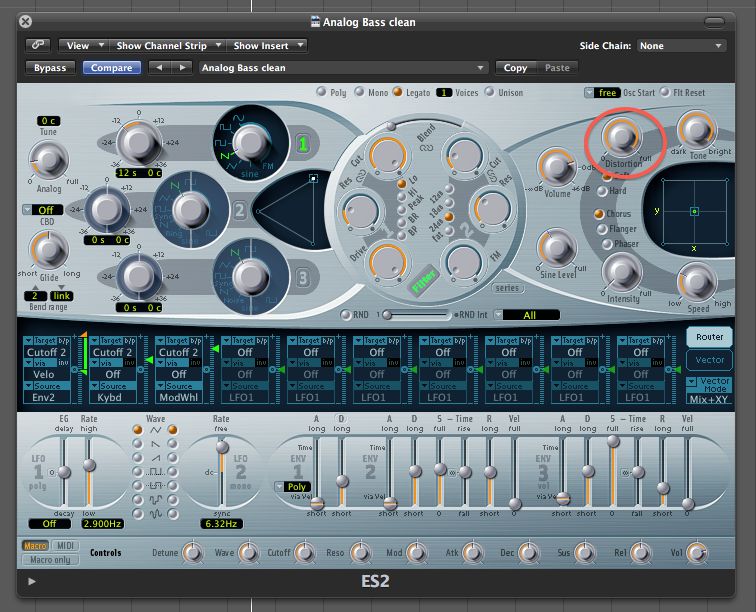 Pull the Release all the way back on Envelope 3. 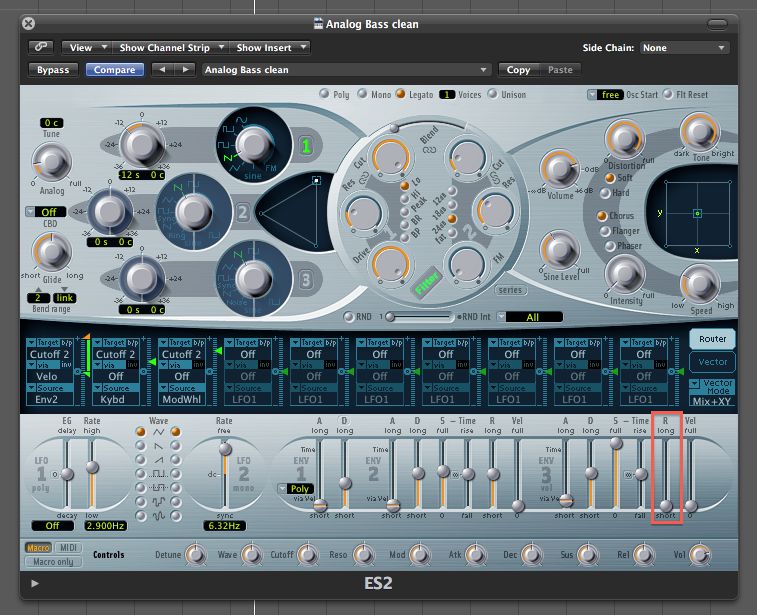 Now in the global section, turn on Unison, change the OSC Start to Hard, and enable the Filter Reset. That should do it as the basis for our Electro House bass sound, but we're not nearly finished. The effects we'll be adding are vital to getting the sound right, but before we start to add effects, let's record something (or step something in) so we can hear the result of our work on an actual part. Here's a screen shot of the same MIDI bass part I wrote that plays on the sample file for this article:

The very first note is over an octave above the main bass notes to create the bent legato/glide effect (once it bends down to the note below it). The next notes are all of different lengths, but no two notes ever play over each other to create a more choppy feel. Then there are other notes that actually play under/over one another so they create a slur. Since this patch has Legato enabled, the noters will smoothly bend into one another.

First, let's flatten out the dynamics by adding Logic's Compressor. Under the Guitars menu, choose the FET Bass preset. The FET (Field Effect Transistor) Circuit Type is very fast. Since I want total containment over this sound, I think it's the best choice for the job. Play the sound on your controller, or play back the MIDI bass part you created while pulling the Threshold down. Try around -23 db. 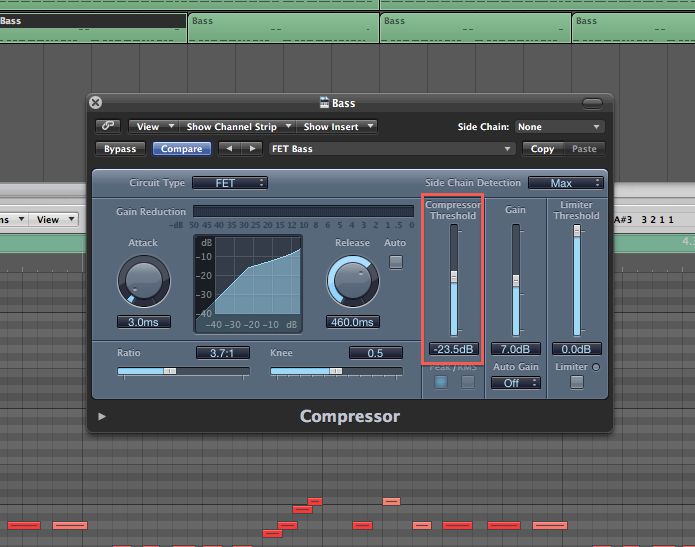 Next let's add the Clip Distortion and choose “Hot Drive” from the presets. I use the Clip Distortion plug-in a lot. I wrote another mPV article on it. It can add subtle texture when handled carefully, or mangle the heck out of whatever you send through it! We can leave this without changing the preset, but later in the Tips step at the end, I suggests a few parameters to tweak. 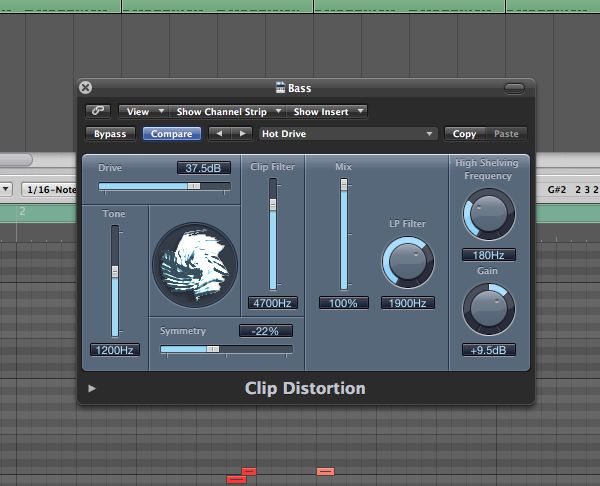 We're adding many layers of distortion, but we're containing it at the same time so it doesn't get away from us. For example we added the distortion effect and the filter Drive in the ES2, but then we set the OSC Start and Filter Reset to re-trigger. Grunge it up - Tighten it up.  The idea is to add distortion without unpredictability. In some cases, randomness is great, but not in the case of distortion. I look for a clean crunch... that might sound like a contradiction, but that's the only way I can describe it. It's doing its job without getting too carried away!

Next in the chain is the Bitcrusher. Pull the downsampling slider to 2x, push the Drive slider all the way up, and select the bottom option of the Mode parameter. Now it's getting there. Now I want that vocal/throat kind of sound in this bass, and we'll be using two of the Channel EQ's four center parametric bands to get it. Add a Channel EQ, and push the Gain on the 5th EQ band (already set to 1200Hz) up to around +14 dB, and lower its frequency down to around 900Hz. That should already give the bass sound a vocal type quality. Push the 4th EQ band (already set to 500Hz) also up to around +14 dB. Play the sound on your controller while sliding the 4th band's frequency around between 300Hz to 1200Hz. It's talking! Consider automating this band. For this article I didn't do it, but it's almost literally asking for it! If your MIDI controller has knobs, press Command-L to “learn” both band 4 and 5's Frequency parameters. After pressing the command, touch band 4's frequency, then turn a physical knob on your controller. Repeat the steps for band 5 with a different physical controller knob. If you recorded a bass part, hit the space bar to play it... this is an insanely cool way to get your bass talking as you turn the controller knobs while the bass plays back! Let's add another Logic Compressor now. We've already flattened the sound right from the start at the top of the effect chain, but now it's time to add some side chain compression groove to the bass.  First, go back to the kick sound we put together in the first part of this lesson, and from the channel's Output menu, choose an available bus. I chose bus 2. We have to use a bus because currently, Logic doesn't allow you to select a virtual instrument as a Side Chain source.

Once you've chosen the bus, go back to the Compressor you just added, and from its Side Chain menu (top right corner) choose Bus 2. Now start Logic's playback. Change the compressor from RMS to Peak, the Ratio to around 2.5:1, the Release all the way down to 5.0 ms, and then start to lower the Threshold till you get the “bounce” of your choice. You may also want to adjust the compressor's gain at this point. 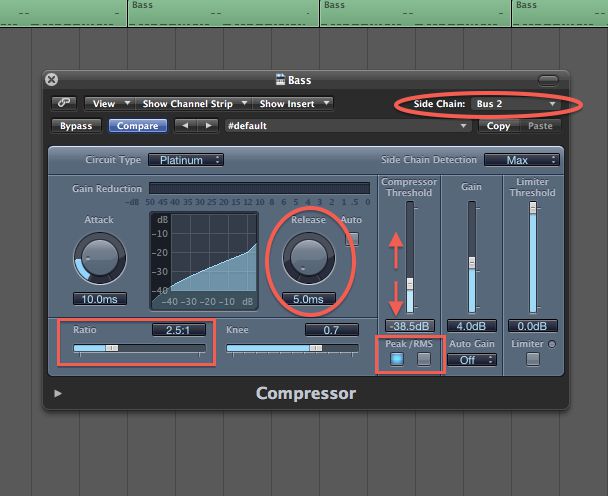 So the sound is very loud right now. We need to add a limiter to put a final ceiling on it. Add Logic's Limiter plug-in now. Simply leave the default settings. Now that you've added this, you can adjust the volume on the track itself. A limiter's job is to contain a sound without changing the sounds characteristics too much, and some limiters sound better than others. In my opinion, Logic's built in limiter is not as transparent as I wish it was. One of my favorite limiters is Fab Filter's Pro-L. So that's it! You might also want to add a touch of reverb at the end of the chain. I'd suggest a short reverb with a pretty low level just to give the sound a slight ambience. Sounds still not fat enough for you? Use a send/bus to pipe the sound over to an Aux track with an EQ set with a low shelf set pretty high. This way you can “chunk-up” the sound as little or as much as you want by simply adjusting the Sends volume control!

Mess with the Clip Distortion's Drive, Mix and Tone for unlimited distortion variations. Turn on Oscillator 2 in the ES2 and move the green square around in the triangle.

Here's a sample of the final result again:

Reach
These have been the best logic tuts on here ever, and that's saying something! Thank You!
Darren Burgos
I'm so glad to hear it! Thank-you!
Gary Hiebner
Another great article Darren. I usually jump for Massive or FM8 to create some crazy Electro House bass sounds. Now I'll jump to the ES2 as well.
Magic Fingers
Simple and very effective solutions for creating phat bass lines!!! It's always nice to stick with the Logic plug-ins when I can. This will save me time, and my laptop will thank me when i'm processing a ton of tracks at once!
AKA Adam
Hey Darren,
I got lost on step 13. Where do I add that extra compressor? And do I have to turn the send up on the kick? Otherwise it's sounding great!

Darren Burgos
Thanks Adam. You want to output the kick first to any available bus. You do this because virtual instrument's can't yet be directly used as a side chain source. Remember what bus you output to, then go back to the bass and add another compressor. From it's side chain selector (top right) select the same bus you just output the kick to. That should do it!
toome
Hi,
I get lost on the 13th step too.
Also, the sound of the bass is awful and covers the drums all the way.
A help would be really appreciated, thank you

Darren Burgos
13 is a vital step ...the kick will knock the gritty top sound's volume back only when the kick actually hits. You could also use other sources for the side chain ...like kick, snare, hats output to a bus. Yeah, the sound is a little "clicky." It's a great source though for continued tweaking, and the idea is to get you thinking about these kind of channel strip chains.
Erick Valerin
Hey Darren, a little late on these tutorials but better late than never. On step 12 when I added the EQ, the baselines volume shot up to +12.8. Is that just part of the process to achieve the sound or did I do something wrong ? Either way the limiter at the end helped bring the volume back down. Thanks for the tutorials.