New updates to Live's automation features bring a whole new level of creative possibility. Noah Pred explains how to turn them to your advantage.

Ableton’s latest update has augmented Live’s already powerful sound design toolkit with the advent of new envelope curves and editing features. Taken in combination with much-improved differentiation between absolute parameter Automation and relative parameter Modulation, it’s easier than ever to change your sounds over time with unprecedented control and intricacy.

Automatic For The Future

In short, Automation envelopes allow you to control the value of an instrument or effect parameter over time. Prior to Live’s latest update, you could either record Automation in real-time via MIDI-mapped controllers (or simple mouse input), edit it by creating breakpoints on the envelope that can then be moved to create gradual changes, or by using the Draw tool to intuitively enter Automation freehand – or quantized to the visible grid interval.

Now a simple right- or control-click within any envelope editing area provides an array of shapes in the resulting context menu that can be imposed on the currently selected area with a single click: Sine, Triangle, Ramp Down, Ramp Up, Square, Exponential Fade In and Out, S-Curve In and Out, and a multi-stage logarithmic ADSR envelope approximation. 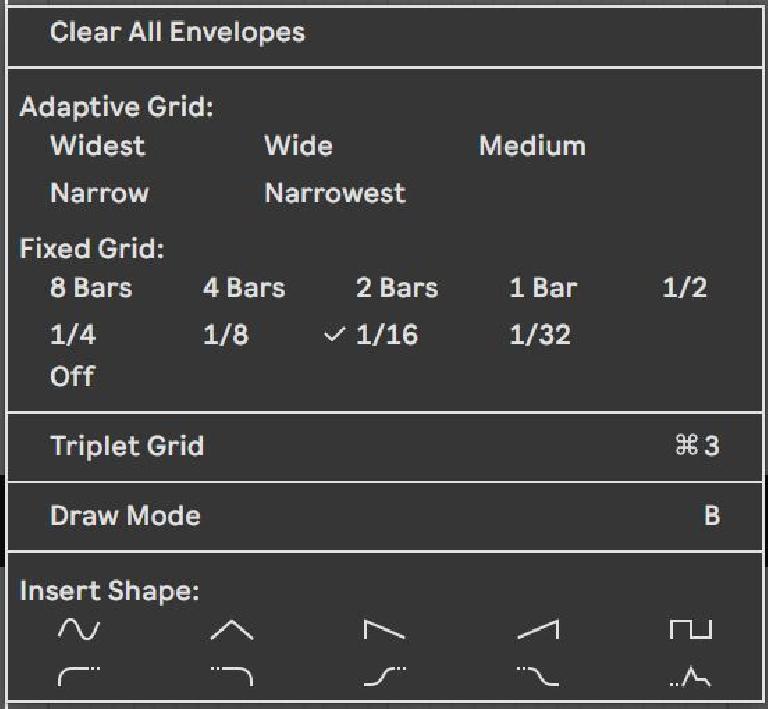 Simply applying these shapes can make automating parameters such as filter cutoff or wavetable position in repeating or subtly shifting patterns easier than ever. In this case, I’ll apply each of the first five shapes in sequence to various segments of a Wavetable’s Oscillator 1 Position in a Session view Clip.

To do so, make sure the Clip Envelope view toggle is enabled at the bottom left of the Clip Detail view, and selected via the arrow toggle to the right of the Envelope settings header. I’ll use the Edit tool (as opposed to the Draw tool – use “B” to switch between them) to simply select one bar segments, then right-click to select the desired automation shape for each of those segments.

Selecting the Sine shape on the first bar of Wavetable Automation.

In this crude example, there are a few things I want to tidy up. First of all, I’ll click on the first breakpoint, pulling the start of the sine curve to the bottom on the first beat to delete it. Then I will drag the breakpoints at the start and middle of the triangle curve forward one full quarter note. 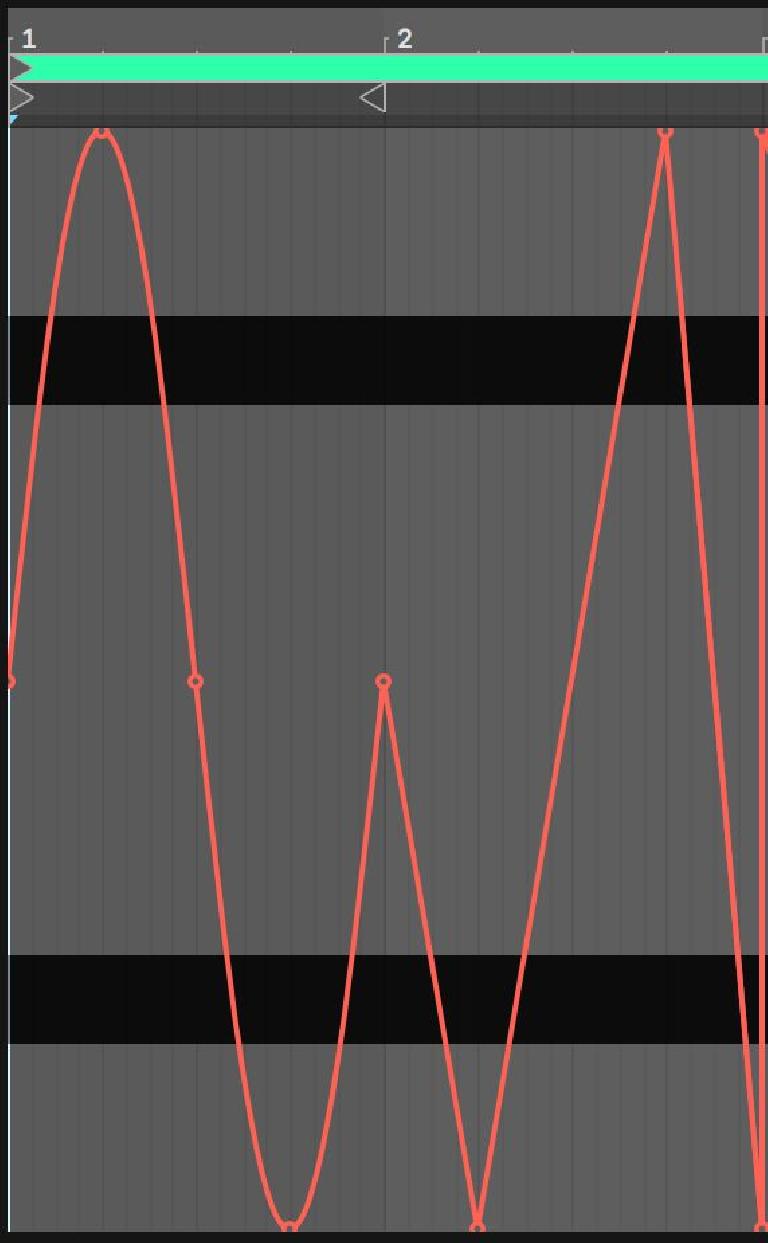 Now I’ll drag the first ramp down breakpoint left by a 1/128th note, hold down the Option key while hovering over the interstitial envelope line segment, and drag down to impose a Bezier curve to avoid any unwanted clicks as the value transitions. After selecting the 5th bar and using CMD+D to Duplicate the Square shape segment, I’ll use this same Bezier technique to smooth any sharp cuts on either side of the full range pulse. 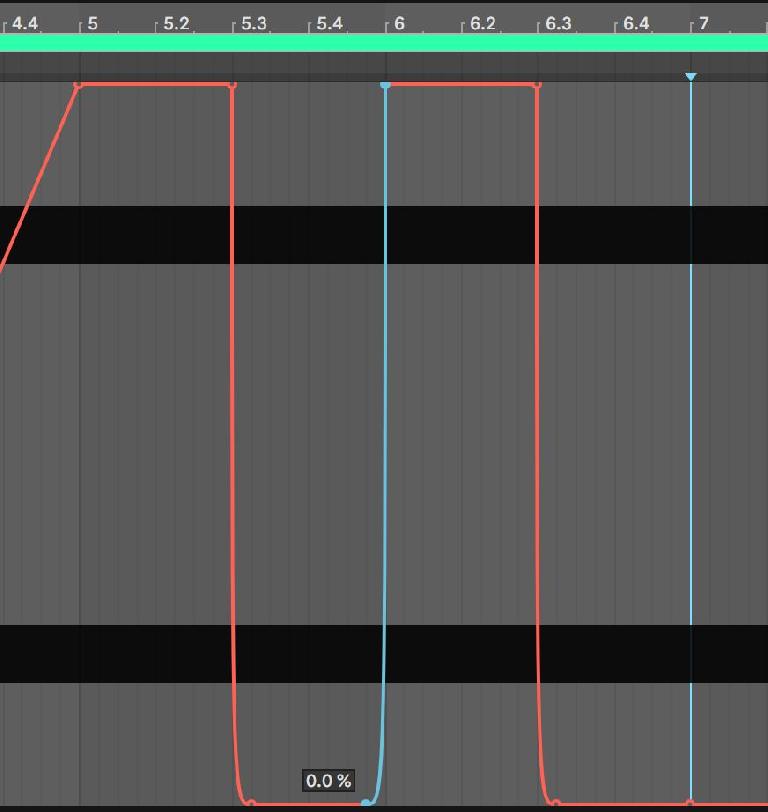 Now I will select the final Square shape and Duplicate it to the end of the phrase using CMD+D twice. With the final 7th and 8th bars selected, I can now use the new envelope frame controls to shorten the span of Automation from 2 bars to a 1/4 bar. 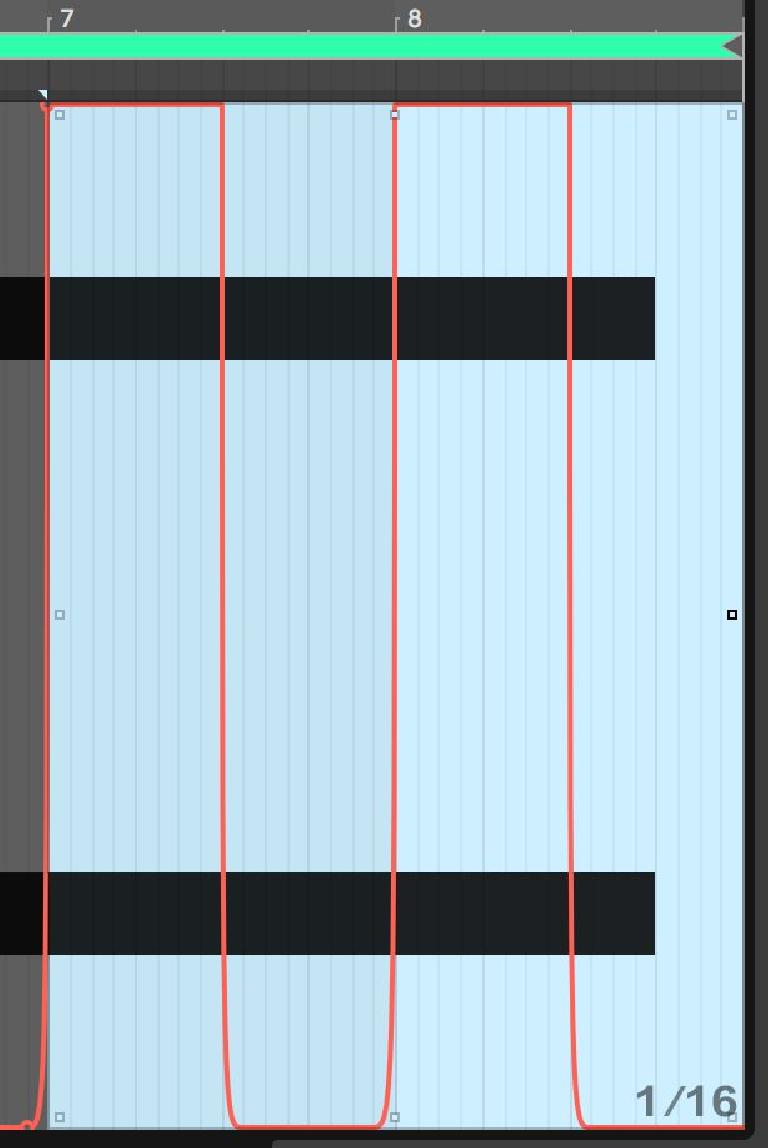 Having dragged it left, I can now duplicate the 7th bar of quarter note pulses, squeeze in half, and duplicate again.

The final two bars of squeezed and duplicated Square curve Automation now looks like this.

Zooming out, it’s clear that I’ve created a control shape that would be exceedingly difficult to generate with an LFO. By using combinations of these newly available curve shapes, we can create complex step sequences for any parameter in Live – and when automating Rack Macros, these can control multiple parameters simultaneously.

In the Session view, Clip Modulation could be edited to control parameters in discrete segments relative to Arrangement Automation values – but it could be somewhat unclear which was being edited at any given time.

Now a simple Aut/Mod toggle in the Clip Envelope view area allows you to choose whether to view and edit Automation or Modulation for any parameter rather clearly. To further delineate between the two, Modulation envelopes now appear turquoise. As before, Automated parameters throughout Live’s GUI have a red dot next to them, but now a “ghost” turquoise slider represents parameter Modulation within the devices themselves.

However, when editing in the Arrange view, Automation is constrained to the lanes visible in Automation mode, while Clip Envelopes strictly provide access to Modulation. Automation anchors the parameter over time, while Modulation responds to the anchored Automation value in relative proportion.

To make better use of the unique shape I’ve created, I’ll select the full span of Automation using CMD+A and then Cut it using CMD+X. Then I’ll click the Mod toggle for the same parameter, click the arrow at the 1.1.1 header of the Clip Envelope grid, and use CMD+V to Paste the envelope to the parameter Modulation instead. In addition to Envelope being a different color, it’s also now bipolar rather than unipolar: the center of the Modulation envelope corresponds to whatever the current Automated parameter value might be.

Now I can toggle back to the Automation view area via the Aut toggle. I can click the Linked toggle to decouple the length of this particular Automation envelope from the length of the Clip itself and set the Length to 12 bars. Selecting the full 12 bar span, I will add a triangle shape from the context menu and move the center peak breakpoint to the 9th bar, then impose Bezier curves via the Option key modifier while hovering and dragging over the envelope line segments.

PRO-TIP: Right- or control-click an envelope breakpoint and select Edit Value to type in a specific value numerically.

Exploring the envelope frame handles further, I can manipulate drawn automation in previously impossible ways. As explored to some degree already, dragging the vertically middle left or right frame handles can compress, expand, or even flip automation in the time domain if dragged past the furthest edge of a selected area.

Dragging the horizontally middle frame handles at top or bottom can raise or reduce the maximum or minimum values of the drawn envelope, respectively. Finally, the corner frame handles can be dragged up or down to skew or even invert the relative intensity of automation over time.

Modulation curve skewed up to maximum over 8 bars.

PRO-TIP: Save blank Clips with your favorite custom automation sequences written in to your User Library for future use.

Applying these techniques in combination with just a bit of creativity can generate intricate dynamic changes to any third-party or native device parameter configured in Live, offering entirely new horizons of control. Between enhanced interactivity of Automation and Modulation, easily-deployed preset curves, and flexible frame transformations, Ableton has quietly yet powerfully expanded the already versatile automation capabilities of their ubiquitous flagship DAW.