If you want a Reaktor instrument that'll give you 9216 loop variations with the ability to quickly create unusual, textured beats for next to nothing? Check out Flintpope's Drumlines Lofi Refill.

Flintpope is back with another interesting drum instrument. Though it feels like we're not doing justice by refering to it like that. It's all about texturing beats and loops on top of each other and comes bundled with 96 loops and a mind boggling 9216 loop variations.

It's available now for Native Instruments Reaktor 6 users for just $3.60!!

Here's more details about it:

This is a LOFI REFILL for Drumlines, a Reaktor 6 instrument consisting of 4 sets of 24 musical drum loops that play against each other to create complex, textured beats. To use, just open DRUMLINESxLOFI.ens in the REAKTOR INSTRUMENT in the download folder and hit the Space Bar on your computer to play. Everything’s loaded.

You get 96 two-bar loops in WAV format at 120 bpm. You can happily downtempo to 105 and up to 140 before artifacts, and there are various FX (see below) to further randomise your mix. You also get 16 presets as a starter: create unlimited presets of your own.

The total possible combinations of loops is 96 x 96 (9216 variations) and that’s not factoring-in mute or solo into the possible arrangements. You don’t need to worry that your beats will sound like anyone else’s.

DRUMLINES suits live performance or can be used in your DAW. If multiple instances are used in the latter please re-load a fresh copy separately (don’t just copy track) to avoid a Reaktor loop meltdown.

LOFI REFILL is 96 LOFI LOOPS: grainy beats with a ton of atmosphere and noises-off. If you like Mindsgn and Clark you may like these.

All sounds and tune-snippets are Flintpope originals and completely royalty-free. If it sounds like someone else’s riff it isn’t. A lot of care has gone into making these loops all sound as if they’ve been lifted off records but they haven’t; all 96 have been carefully crafted in Ableton Live over the last few weeks. Care has also been taken to ensure at least 99 percent of the loops all play nicely with each other. 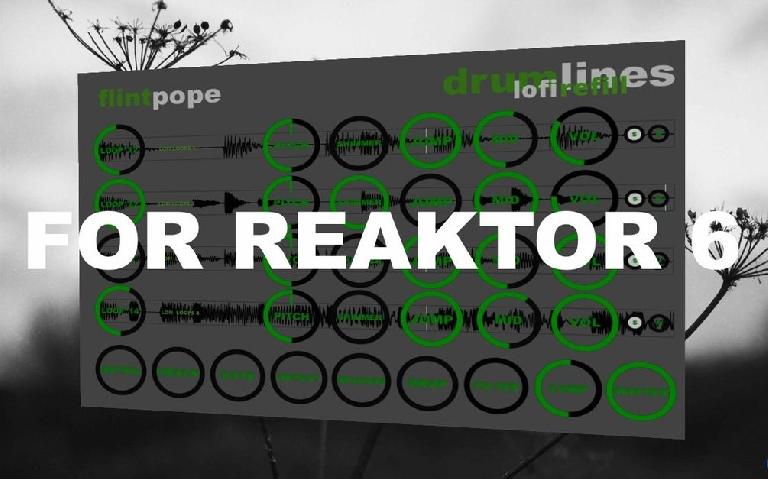 Each loop, or LINE (you can see the waveform playback on each) has a set of eight controls.

SELECTOR chooses the loop number from 1-24. Playback is instant as you change it. If playback-sync glitches simply press RETRIG (see below).

PITCH Up or down a semitone.

SHIMMER A switch effect (on or off). Randomly stutters between different loops in this drumline. Best used with another loopkeeping the beat solid. This is the secret weapon of this ensemble (used also in FLINTPOPE’S ATMOS and DRUMBOX) and can be almost rhythmic most of the time. Used against other drum-loops it can create an interesting texture and delightfully broken feel.

JUMP Another quirky effect dial that acts Like a vinyl record when the needle jumps. Experiment with settings to get breakbeat and or stutter effects, especially when combined with SHIMMER.

MID is a simple mid-range cut or boost dial that helps clarify the mix in a busy set of loops.

VOLUME dial needs no further explanation, neither do S(OLO) or M(UTE).

Firstly, a big thanks to Sylvain Stoppani at www.blinksonic.com for creating the FX Feedback, Gate, Reverse, Repeat and Drop in his PROCESSORZ Ensemble (freely downloadable for Reaktorblocks at http://bit.ly/2pMJ703)

RETRIG(ger) If the loops stray (esp. after using JUMP) hit RETRIG. After changing an embedded preset use it too. Or use it as an effect.

FBACK A one hit feedback for Dubstep style grind.

GATE A one-hit gate for a shimmering effect.

REPEAT A one hit for a bubbling sort of stutter.

REVERSE A one hit that does exactly what it says on the dial. Very impressive M. Stoppani!

DROP An equally impressive one hit from PROCESSORZ that sounds like the tape-deck or record-player has wound-down.

FILTER The first actual DIAL in this array. Routed to VCF cutoff frequency this gives you the muffled “gone to the bathroom” effect.

Haven’t got Reaktor 6? Why not consider purchasing this for the set of 96 drumloops? They are in a separate folder for easy access.

Reaktor power-users who are familiar with the Sample-map also get a folder with the four sample-maps so they can be used in other Reaktor samplers that use this function.

Again, Reaktor power users should have no problem inserting their own loops or other sounds into this ensemble. Just ensure each sample is ROOT 60.