The new MixConsole features in Cubase 10 range from big changes to small ones, but they will all make your life easier in important ways. Hollin Jones explains how. 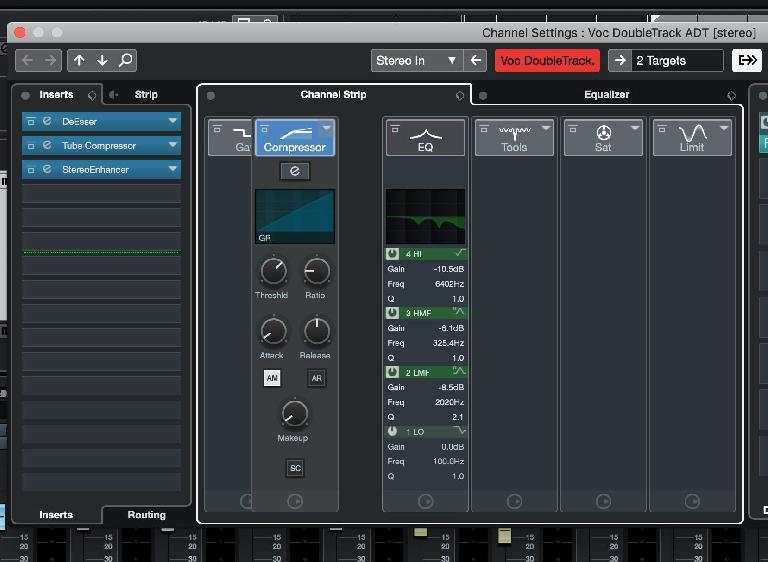 Cubase is gradually incorporating more and more resizable and customisable interface elements, and in version 10, the Channel Strip has had a host of improvements. One of the most useful is the new Channel Strip view, where you can activate and manage Cubase’s built-in effects for every channel. Just like a big hardware mixer might have dedicated effects on each channel, so Cubase gives you a “standard” set of processors to work with. These can be dragged and dropped into different configurations by simply picking them up in this view, with all routing done for you. Changing processing order can affect the way the end result sounds. 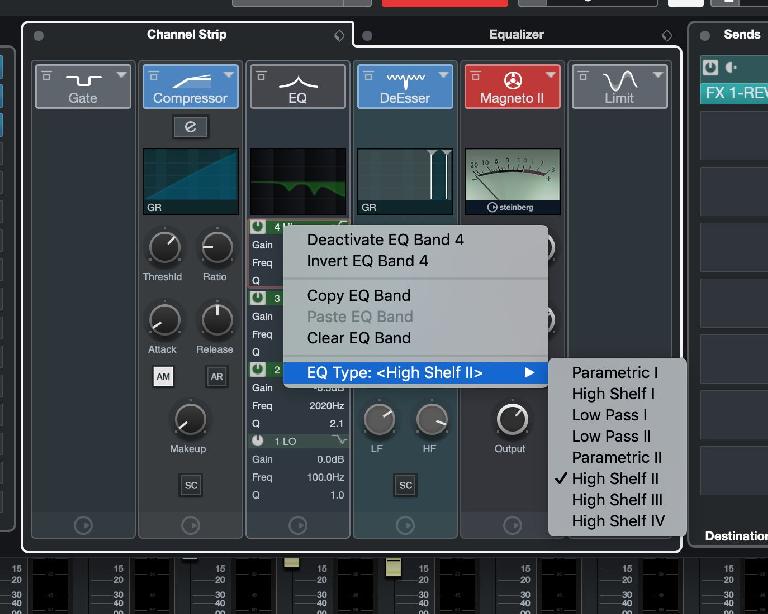 Speaking of channel strip effects, these now have expanded control setups. For any loaded channel effect (these aren’t plugins but Cubase’s own MixConsole processors) you now get a much more detailed set of controls than in previous versions. These vary by effect so some have simpler controls, and others have many more options to customise their behaviour. Similarly, most of these parameters can be both added to Quick Controls slots, and automated so you can control them just as easily as any other element. 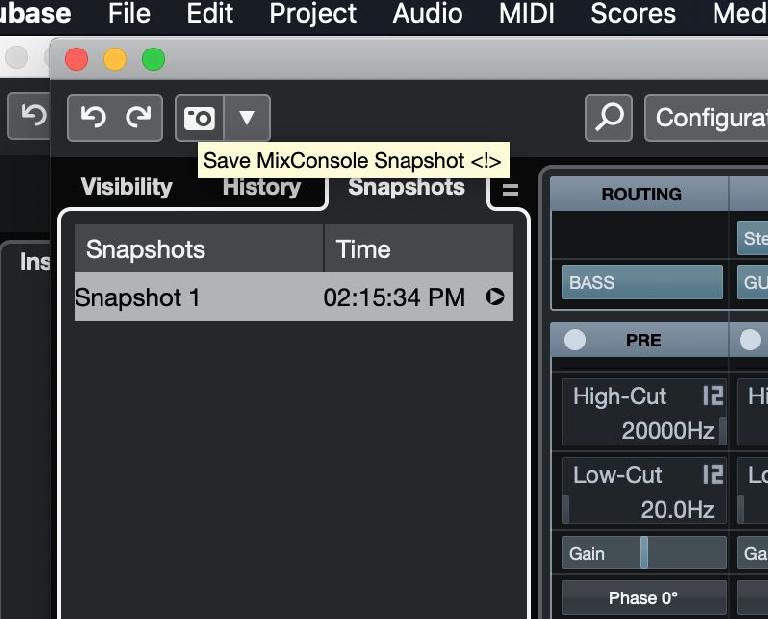 There’s lots to say about the new Snapshots feature in MixConsole. In the Snapshots tab at the top left corner of the mixer is a new Snapshots tab and column. Simply press the camera icon here to add a snapshot of any given mixer state, which will recall the entire mixer setup. Make tweaks to change the mix, take another snapshot and then use the Snapshots column to toggle between them - or as many different treatments as you want to audition. It’s a real lifesaver. 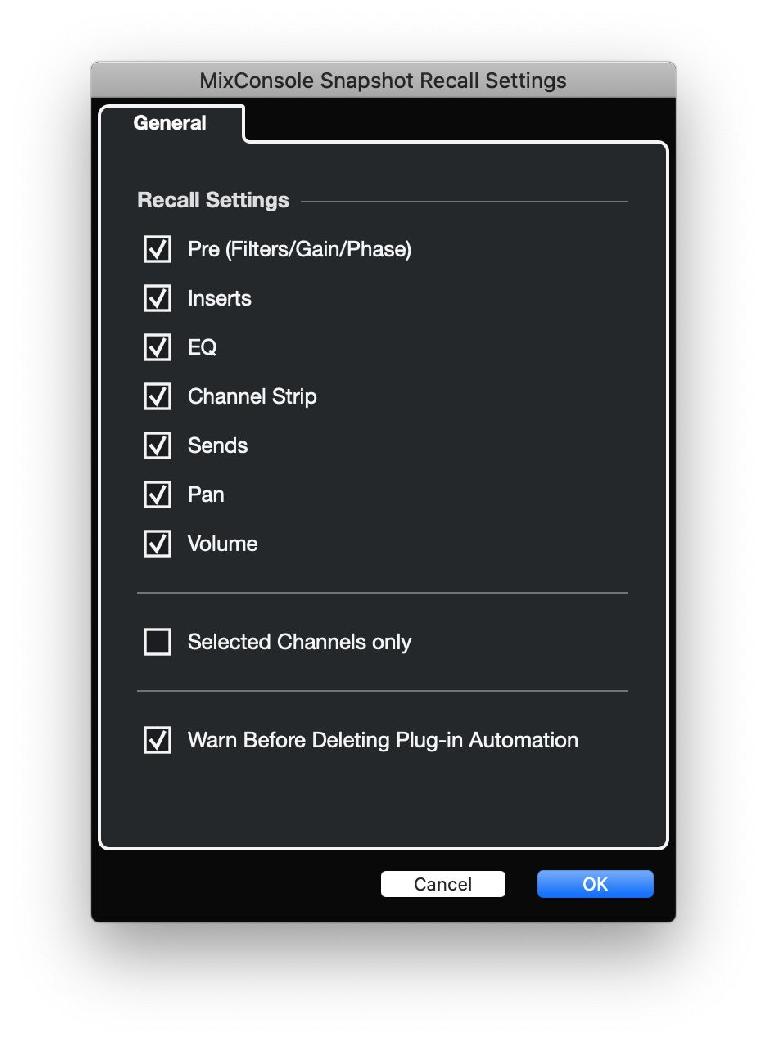 Right click on a snapshot in the Snapshots column and select Recall Settings to open the recall window. Here, things get interesting. By selecting options here, you can choose which parameters get included when restoring a snapshot. So to recall new volume settings but leave existing EQ settings intact for example, make sure Volume is checked but EQ is not. Better still, the Selected Channels only option, when checked, means that the recall will only be applied to the channels you have highlighted in the mixer. This is incredibly important because it means for example you could just change a drum submit while leaving vocals, bass and guitars all the same. Or, any conceivable combination of tracks and settings. You can see how powerful and useful this will be in everyday mixing situations. 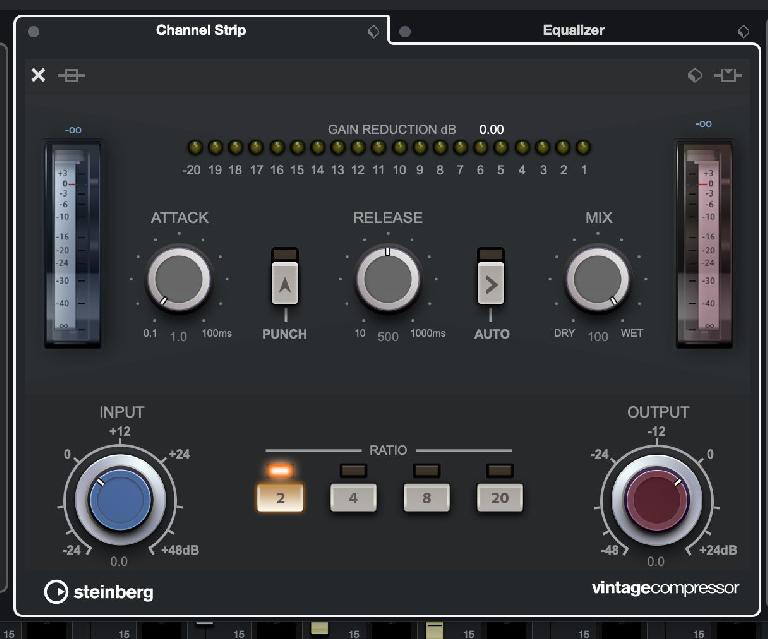 We have mentioned the expanded control sections for the Channel Strip FX in Cubase 10, but the compressor has another level. With the compressor selected, press its “e” button to reveal an extended control set with a nice graphical UI. This will depend on which model of compressor you have selected. But as well as looking nice, they really help you to better understand what’s going on with the way the compressor is working. Of course you can use the simplified control set too, but it’s good to know that this one is available. 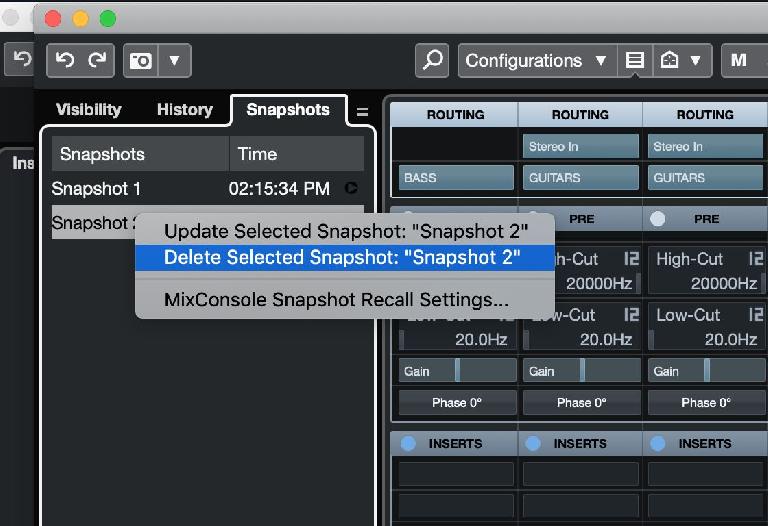 In the Snapshots column of the mixer, you can double click on any snapshot to change its name, and also add notes in the area below. This is a great idea - “best mix”, “quiet drums mix” and so on will help you much more than “snapshot 1,2,3” and so on. You can also right click on any snapshot to perform a couple of different actions. Update Selected will place the current MixConsole settings into the current snapshot, which means you don’t have to keep duplicating snapshots to make minor changes. Delete is pretty self explanatory, and again means keeping the clutter down.

When you recall a snapshot, Cubase will delete insert automation associated with a project’s MixConsole effects. This is because if you change a bunch of insert settings by loading a snapshot, the old automation becomes meaningless because it contains values that no longer accurately link up with FX settings. So you should know this - you can check a box to disable the warning once you have got the message. 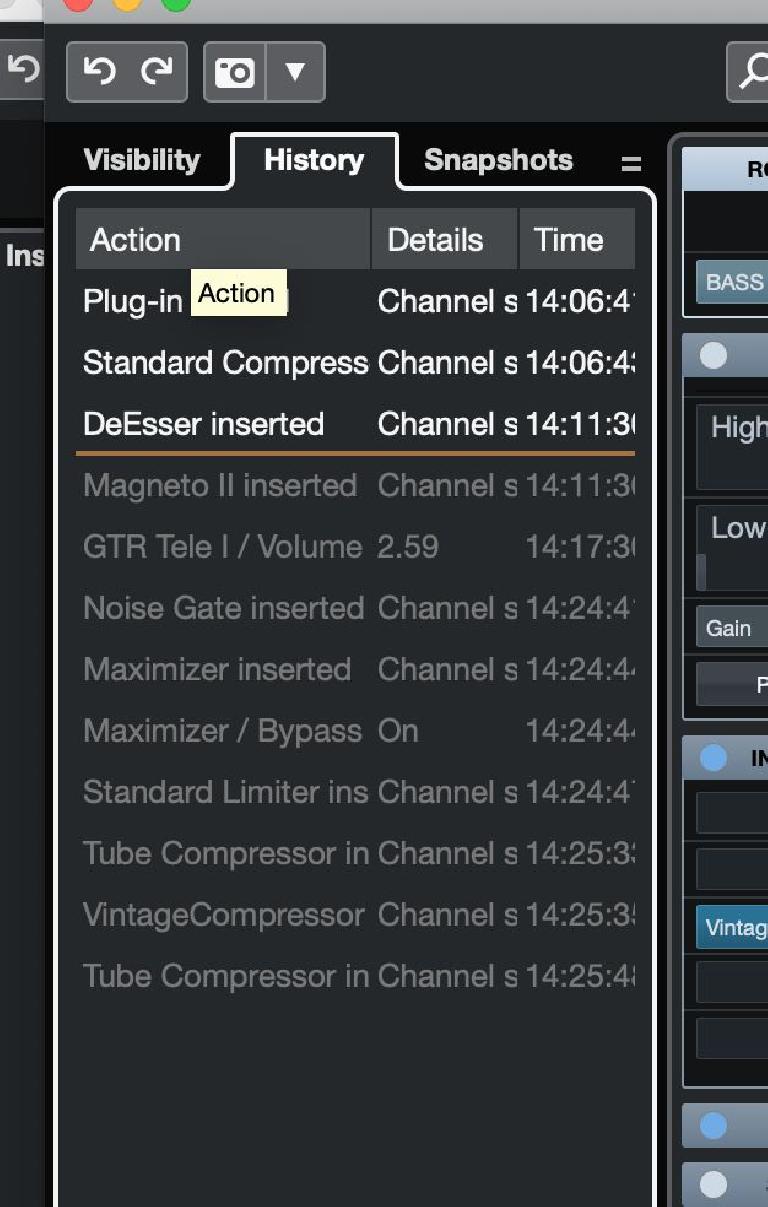 MixConsole has a History column, which is on the left next to the Snapshots column. This shows all the actions you have performed on a mix for the duration of the project’s life. While you can’t - yet - do anything too complex with history states (because actions have complex consequences and are interdependent so just moving one thing can affect lots of others), it’s still helpful to have. The main thing you can use this for is not only to see at what point you performed certain actions, but also to move back to a point in time.

Yes, this is basically like using the Undo function, but with a list of text-based history actions and times it becomes far more useful because you can now see what it is you were doing, rather than simply guessing using the Undo command. So let’s say that a fee minutes ago you changed a mixer setting, and have performed multiple actions since. Then you decide you want to undo that change. Now you can step back visually to undo it, and be clear on what else you’re undoing at the same time.

This is an area where you can imagine even more powerful tools coming in future - the ability to remove specific steps without affecting ones taken subsequently for example - though that’s pretty complex stuff and arguably may not be at the top of the developers’ list of priorities.