What happens when a synth fanatic decides to build the kind of instrument he's always dreamed of, and then puts it on sale? We caught up with the man behind Nozoid to find out.

Nozoid is a French company specialising in unique, custom built synthesizers including the OCS-2 and MMO-4. They even provide source code so you can hack and modify the hardware if you're feeling adventurous! Following on from our recent news piece about the OCS-2, we caught up with main man Cyrille Henry to get his thoughts on the state of synths today. 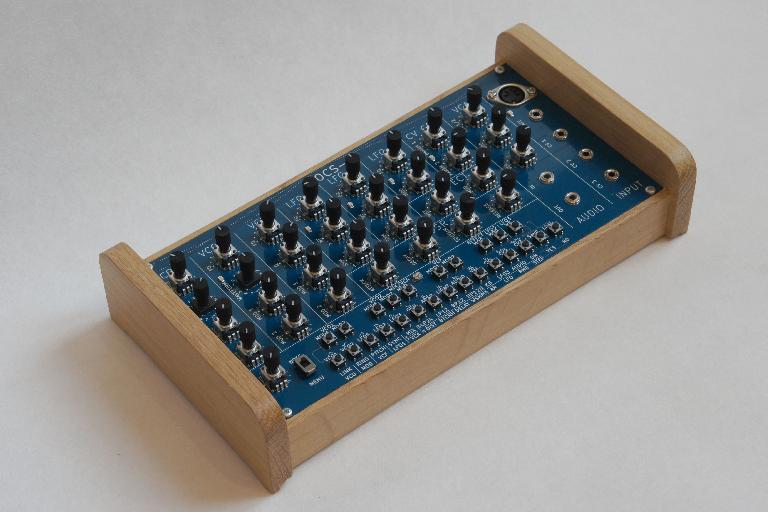 Ask: Hi Cyrille, we know about your Nozoid synths, but not about the man behind them. Tell us about you.

Cyrille: I'm Cyrille Henry and I'm a multidisciplinary artist and developer, evolving in the crossing of art, computer science and scientific research. I'm mainly working on my project and for other artists or companies. I'm working with electronics, sensors and informatics, for real time sound and image generations.

Ask: How did you come up with creating the Nozoid OSC-2?

Back at the end of the nineties, I built various analogue synthesizers for my own use. I always was fascinated by the sound they produced. Later, I mostly stopped using electronics to work with digital software (mainly Pure Data). I experimented with lots of things that were possible only in a digital system, but I also looked for equations allowing me to reproduce the sound of analogue synths. Removing aliasing introduced by the sampling rate of the sound is quite difficult, but the solution was found in the last few years.

One of the computer's limitations is the resolution of a fader input. MIDI is not fast and accurate enough to reproduce a smooth fader movement. So one needs to integrate digital synthesis in a system faster than a computer for good result. 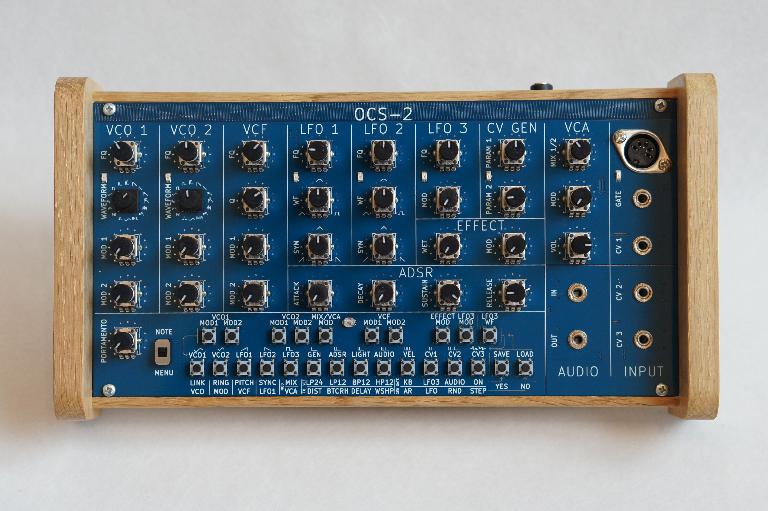 I wanted to prove that we could make a beautiful subtractive synthesis using a digital system. And I was also quite frustrated with raspberry pi used as a musical instrument. One thing leading to another, I got caught up in the game, and I ended up working full time for more than 6 months to develop the synthesizer of my dreams.

I have designed the OCS-2 for my own use. I like live, experimental music, hence the lack of a sequencer and the presence of many LFOs with parametric shape, or other complex CV generators. It is for this reason also that there is only 1 ADSR. This also explains some mechanical aspects  like the MIDI plug on the front panel.
This synth was built around the idea that I should be able to do everything myself.
It is after finishing, and speaking to many musicians that I realized what I had done, and that this machine interests lots of people.

Ask: Why did you open source the software?

I've always been motivated by sharing: everything I develop is free software for example. So I wondered what was the best way to share this project. Putting the sources on the Internet would not have attracted any audience. So I let myself be persuaded to build a batch. On the other hand, I did not have the motivation to turn it into a more commercial machine.

This synth is built around a single board of electronics that also acts as a front face. This electronic board is made industrially and the smt components are soldered by a machine. Everything else is hand made. I solder the switches, faders and all components of the front face and some on the back. I did not find knobs that fitted in this design, so I drew them. They are 3D printed, then dyed in black. I later cut a small piece in order to create a white marker. These knobs are glued to the fader.

The wood box is made using a CNC to cut different wooden pieces. These pieces are then sanded and glued. I have to wax and polish them before being able to drill the spots for the screws. Finnaly, everything is assembled, programmed and tested. 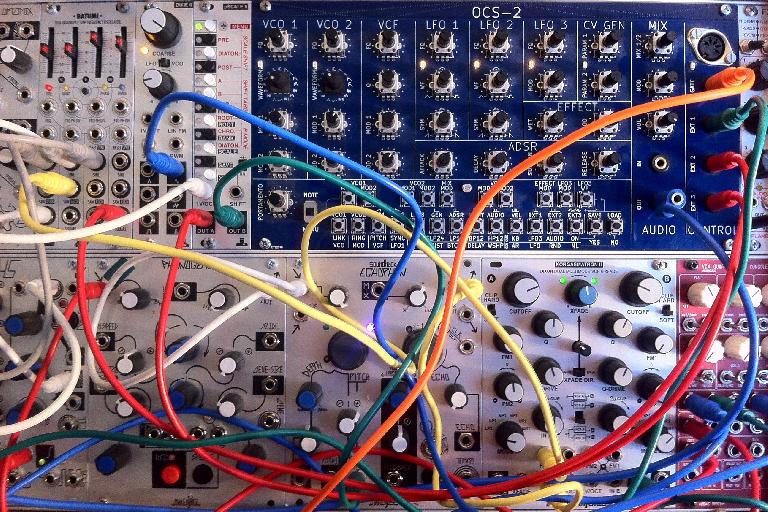 NOZOID OSC-2 in a Eurorack setup.

Ask: Why don't you add a front face?

I did not add a front face for the sake of simplicity, but also because it's not really useful. A front face did not really protect faders. The only aim of a front face is to change the look of the instrument. But this synth is more oriented toward musicians who listen to their instruments, rather than looking at them. So I'm fine with this look.

In the end, having a metallic box would have been less expensive and easier to produce, but having piece of wood on the side to protect faders is really important for a small instrument like this. I really think that the cost of this wood box worth it.

Ask: Why did you use an Arduino?

Arduinos are much more expensive than just the microcontroller they are based on. I initially started this project using an Arduino because the main component is complex to solder. The Arduino Due is very powerful and provides everything needed for this project. It runs at 80MHz, but there is no operating system, graphical interface or anything else to waste CPU. Moreover, the cortex M3 micro-controller is built with lots of hardware peripherals: communication with the audio DAC, fader ADC or LED PWM are all done in hardware without any software intervention.

The core is dedicated to only one task : audio computation. Only the sound conversion from digital to analogue is made using a dedicated chip. For the production,  I could have removed the Ardiuno to put only the main microcontroller on the pcb: it would have be cheaper to produce. But it would also have limited the possibility of modifying it, and would have reduced the re-appropriation of the code that I share. 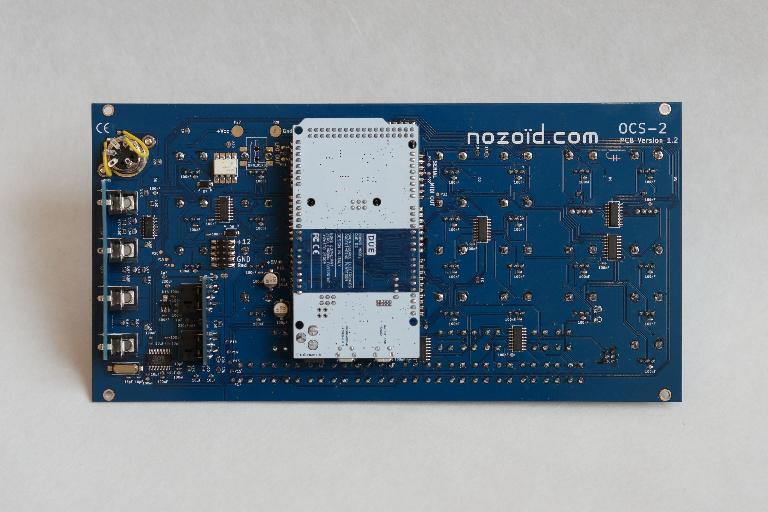 Ask: What can we expect now from Nozoïd?

I am planning to explore this form factor using different kind of synthesis. I'm finishing the development of the MMO : few oscillators that interact using different kinds of modulation : FM, AM, PM, or a custom WaveShaper technique. Later, I plan to design a chaotic karplus-strong system.

Ask: Do you want to add anything?

I could have put 2 times fewer potentiometers to reduce the cost of the components as well as the production time. This is what the majority of manufacturers do to offer machines at an affordable price. But this also limits the range of use and the expressiveness of the machine. Anyway, for what I'm looking for, the more potentiometers, the happier I am. But it is also very expensive ... (in electronics, it is mostly the mechanics that are expensive).

But I made no compromises. This synth has been developed by a musician, for musicians sharing the same aesthetic, and not by sales people aimed at the widest audience. I made choices that are personal to me, knowing that this was not going to please everyone. But it's also what creates diversity...