Cubase 11 expands its Sample Editor’s capabilities to include cool new live performance tools. Hollin Jones shows you how it works…

It’s been a few years since Cubase got its own fully integrated Sample editor, moving the sample editing tools from a floating window to part of the Project window (although it can still be floated if you like). The idea was that you could work with waveforms without being taken out of your workflow, and still able to see your arrangement as you edited. In Cubase 11, the Sample Editor gets some new features, the most useful of which is a new slice mode that makes loops playable in real time. Let’s look at how it works.

In this example we have a drum loop at 100BPM. We can drag it to the Sampler Control area to have Cubase analyse it. 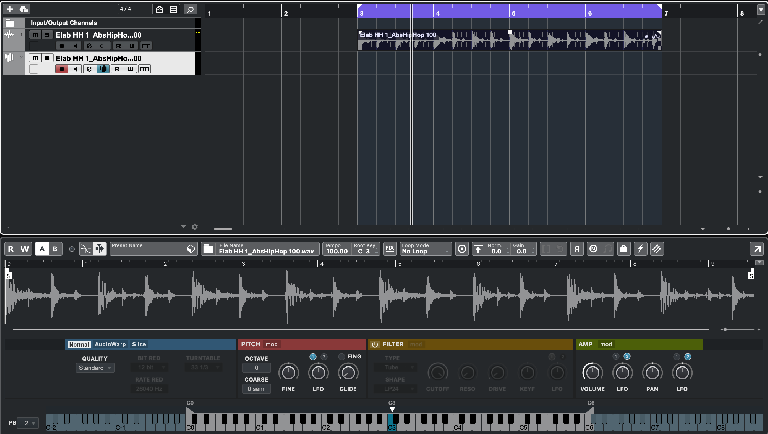 By default, the sample is treated as it would be in a vintage hardware sampler, which is to say that playing MIDI notes will cause both its pitch and speed to change based on the note. This is fine for some uses, but not really much good for modern production. What we want is for the sample to be playable in sections without - yet - altering its pitch. So our drum loop will become an instrument made of slices. Go to the blue area to the left and change the analysis mode from Normal to Slice. Incidentally if you set the mode to AudioWarp, you’ll get a loop whose pitch changes but whose tempo does not. 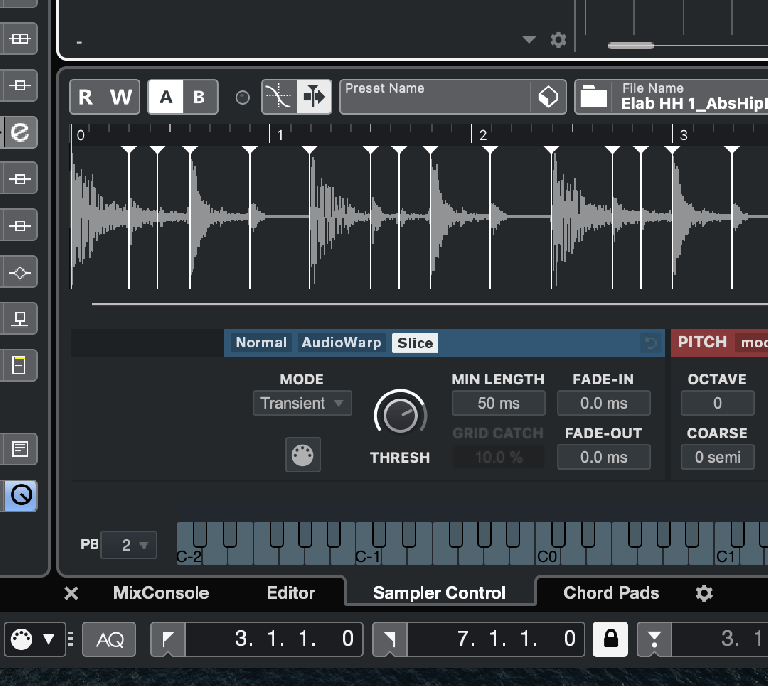 What’s now happening is that Cubase is looking at your loop and using transients - its default analysis mode - to identify where beats occur. In the case of a melodic sample, say a bassline where there are fewer transients, you could use the Grid analysis mode to identify sections. Cubase does a pretty good job of marking transients, but you can use the Threshold knob to make detection more or less precise. At lower thresholds, it will include more area between transients and at higher thresholds it will separate more areas of a waveform into individual slices. 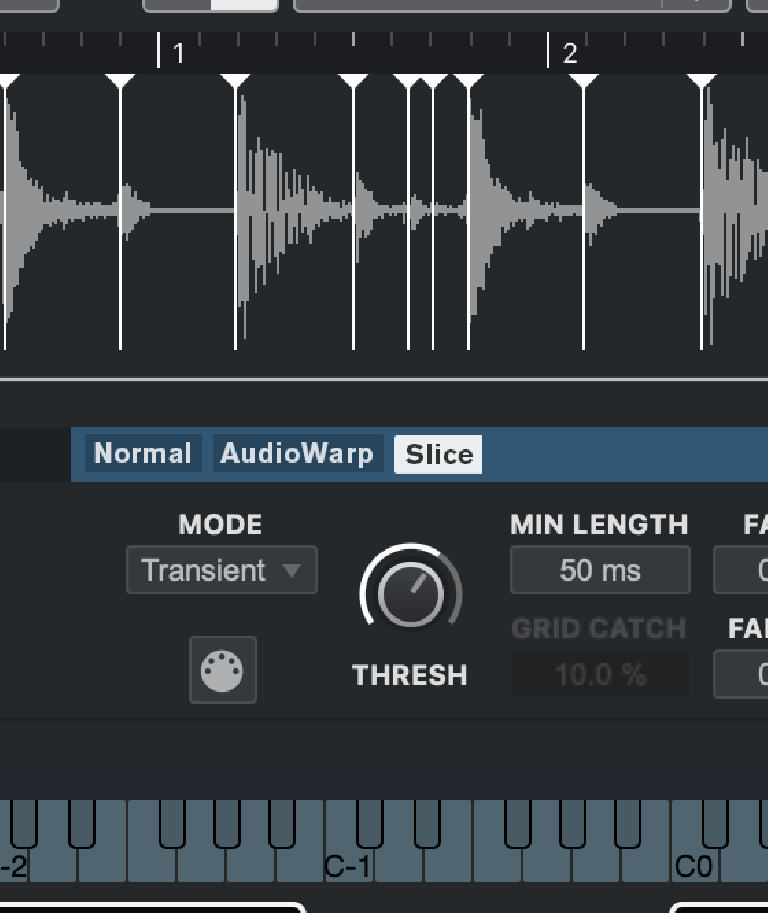 You will find that playing MIDI keys in the range shown in light colours in the Sampler Control window will now trigger slices of your loop. Cubase has also created a MIDI track that’s connected to the sample so what’s happening is that when you play MIDI notes it’s triggering slices of the audio loop, but the loop remains intact on its own audio track in the project. You have two options when it comes to playing back. The first is to play along with and augment the original loop. Give this a go - with the MIDI track selected, hit Record and overdub some triggered slices over the original loop. 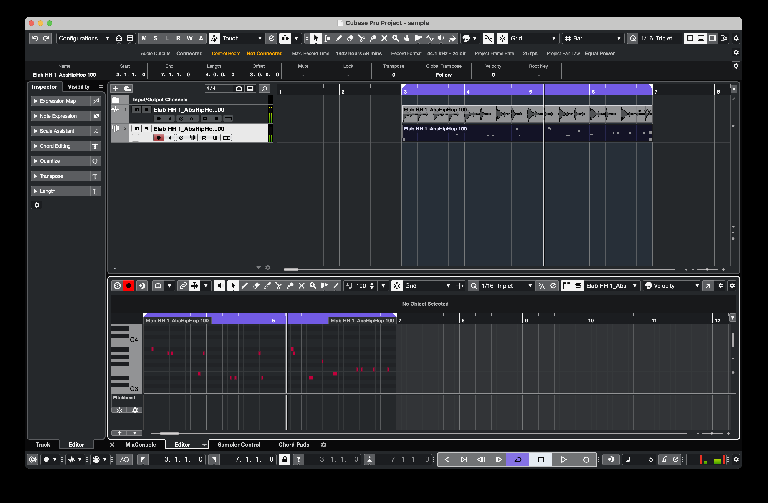 Your second option is to mute the original loop and use the MIDI notes to trigger a whole new part, either to a click track or using other elements in the track as a time base. Bear in mind that this is where your transient detection settings make a difference. When gaps between slices are longer, it becomes harder to play them in real time like an instrument since they can include tails and secondary sounds as well as the initial hit. A little tweaking of transients can be advisable if things aren’t working quite as you’d like. 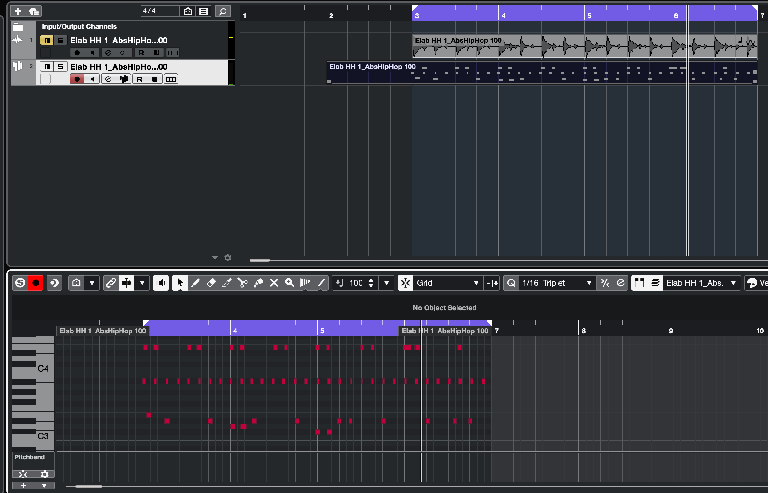 Another creative tool is the ability to apply pitch modulation to slices, and you’ll find this in the red Pitch section. Use the LFO Mod depth knob to add some pitch modulation and now when you play, your slices will go dynamically up and down in pitch based on this setting. Click on the Mod button and you get access to the actual pitch envelope settings. Try moving this curve around to change the way the pitch is affected.

Move to the right and you can choose from a range of different waveforms to control the LFO, as well as choosing how to sync the start of the envelope and how and when it retriggers. These might sound like small things but they can help you control the feel and rhythm of any modulation that you create, making playback more fun and dynamic. Even better, you actually have two LFOs that can be set up independently for even more creative control. 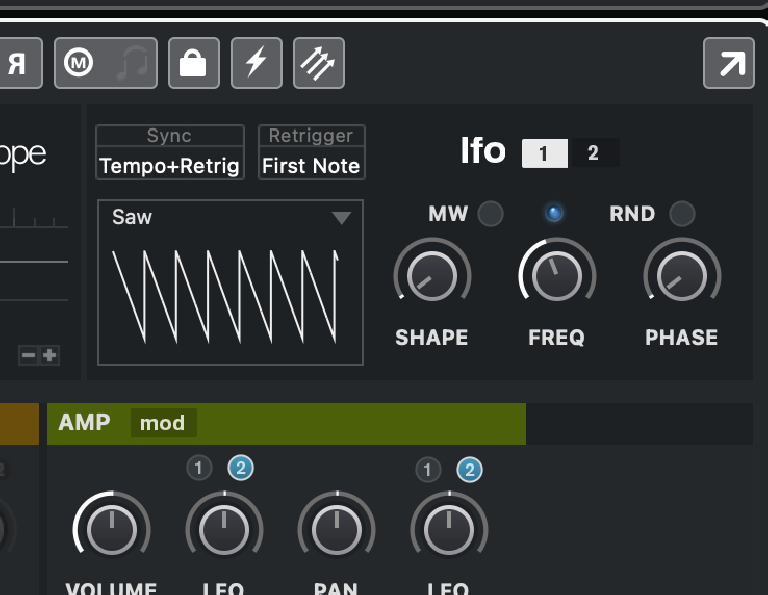 By setting the slice mode to Transient + Grid you can divide the loop into longer sections, playable via a smaller selection of notes. This can be fun for using sections of a loop and re-sequencing them instead of breaking the beat down into short individual slices for playback more like a drum kit. In this example we have used quite long areas of the sample as individual hits, re-sequenced and then quantised the MIDI part to make something new. Remember also that the Sampler Control has two “slots”, A and B. So you can set a sample up to be playable using transients like a drum kit in slot A, and then using grid + transients in slot B for a different feel, and flip between the two. 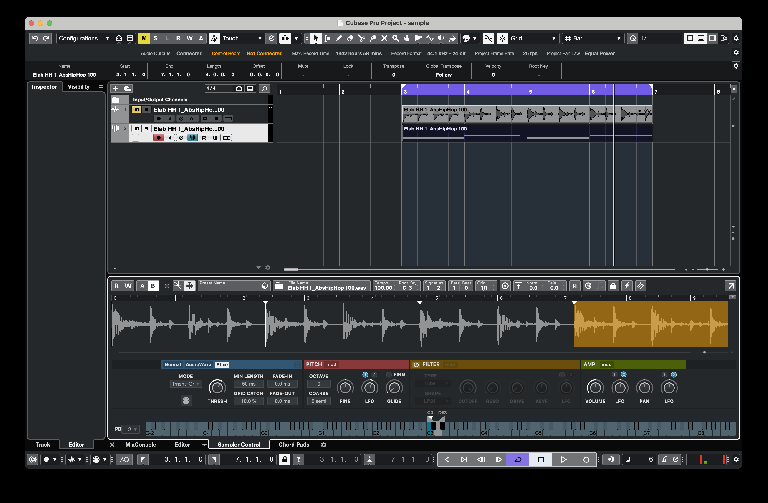 You can of course bounce your MIDI part down to audio to make it real but you are also able to fire it into one of Steinberg’s instruments. If you go to the the button with three arrows on it in the Sampler Control area and click, you will see the option to send it to various instruments provided they are installed. 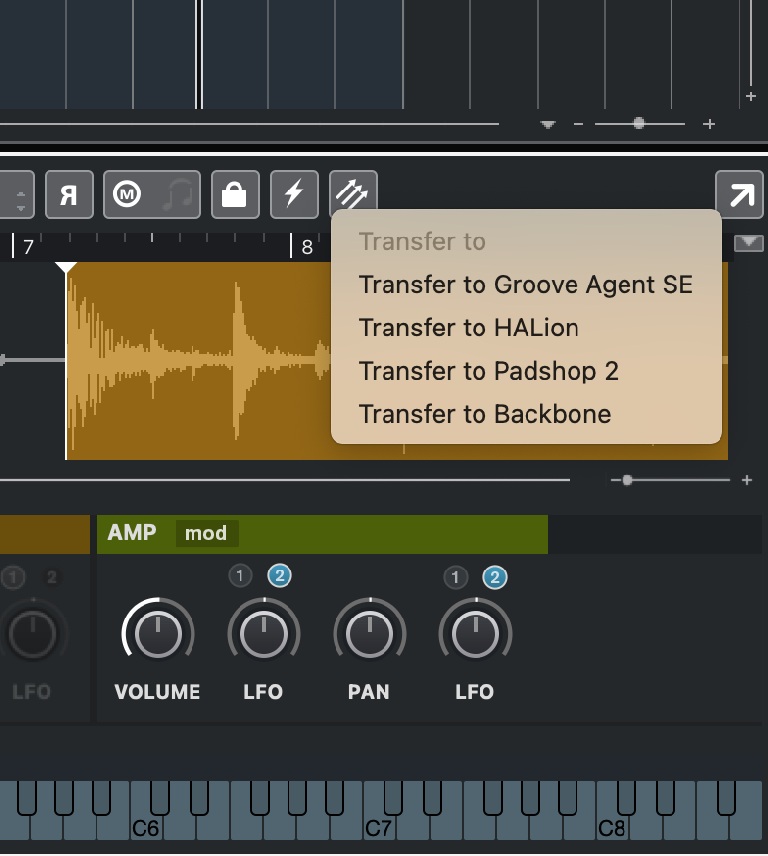 Bear in mind that Cubase will send the sample slices based on the mode you are using, so if you are using tight slices it will map these across lots of Groove Agent’s pads, for example. If you are using Grid mode, much longer stretches of sample will be assigned over fewer pads. 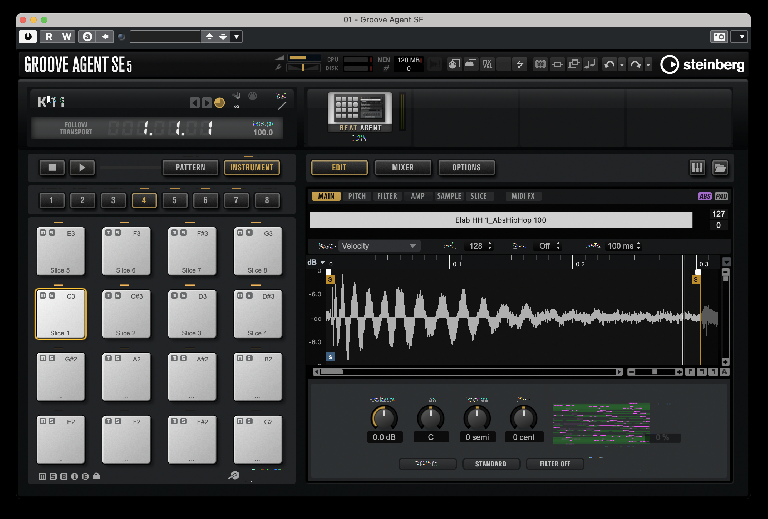 Working with beats is now much easier thanks to the new sample slicing tools in Cubase 11, but it works just as well with melodies and other types of material. So why not check it out today?