Bleeps, sweeps and other sci fi style transitions can really liven a track up. In this tutorial, G.W Childs shows you how it's done in Ableton Live.

There's nothing like a blast off or a UFO swoop to lighten things up and create a mood. All ranges of music, video games, television shows and commercials feature a wide range of Sci-FI inspired sounds. And for good reason - they add depth, character and an ethereal element to any production that can really break up the performance. Let’s take a look at how to make some of these types of sounds from scratch.

For the majority of the sounds we will be creating, white noise will be the initial ingredient. There are many different ways of creating white noise in Ableton Live, from synthesizers to audio files that exist within the factory content. However, I would highly suggest recording your own by either making white noise sounds with your mouth, or even by recording devices around house like for example a vacuum cleaner. By starting from a more natural source, you create something that is both unique and will also stand out as more authentic to the human ear.  Believe it or not, the familiarity makes a big difference to the believability! Here’s the vacuum sample I used, feel free to exploit it yourself. 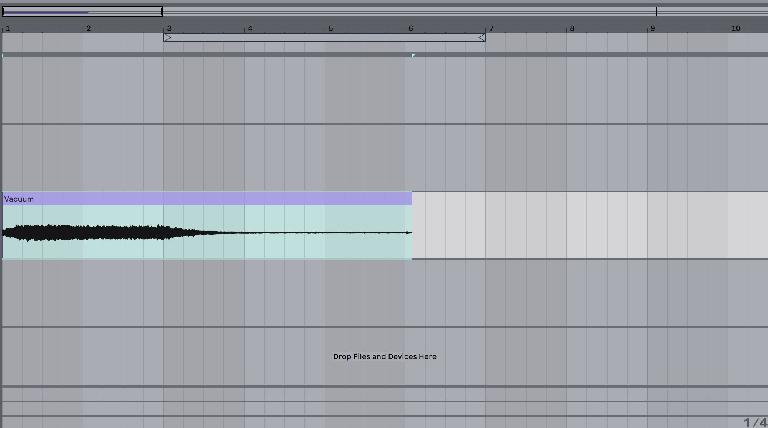 Once I have my vacuum cleaner sample within Ableton there are so many ways I can go from the start. But my first preference is always a little bit of compression. Using the Compressor, I am able to squash the sound together a bit and pump it up so that I can hear more of the fine details within the original sample, and ensure that this sound will pop out wherever I drop it. 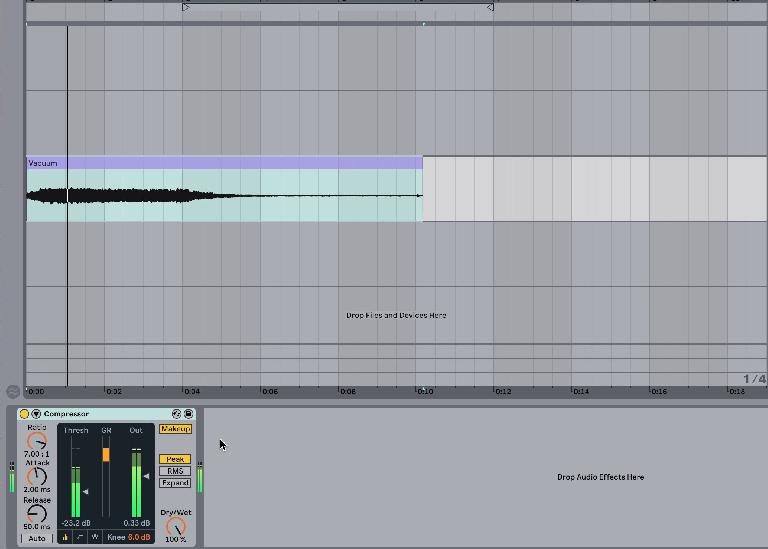 This is always my favorite part, tweaking! Ableton provides so many possible tweaks that it can be a little bit mind-bending. I’ll start off with an AutoFilter, as there is no way that I’ll be using the entire frequency spectrum of a vacuum cleaner in any song! Using the Band Pass mode, I’ll cut a significant portion of the low end up to around 495 Hz. By doing this, I leave plenty of room for drums, bass and synths that will eventually glide along beside this galactic take off, or landing in the low end rumble. Because we are in Band Pass mode, there will be plenty of filtered high frequencies available for hats, vocals and pads.

By sculpting with AutoFilter, I also open myself up to the LFO modulation already laying in wait. I’ll add a significant amount to the LFO Modulation of Auto Filter (17.4) and set the Shape to Sine. Then, I’ll set the rate to a pretty low frequency (.09 Hz) so that I can get that cool, slow rise and fall, or I can increase the rate and get faster swoops, and so on. Please experiment, as these settings aren’t really meant to be locked in stone, as you’ll see soon. 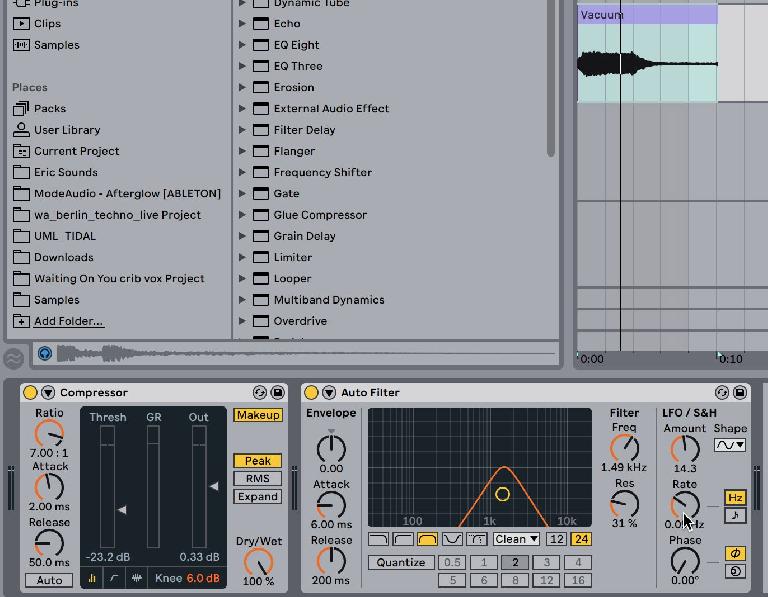 Before we move on to the next section, I’d also like to add a Grain Delay. While the vacuum cleaner has a lot of texture on its own, we need an effect to add a little effervescence and other worldliness to what is currently a very filtered, mundane sound. Try raising the values within the Spray and Random Pitch boxes, and you’ll hear a major difference. Try adjusting the XY pad within Grain Delay, while the vacuum plays. You’ll note that quick movements will make some cool morph sounds, swoops, and textures. Now, we just need to record these movements of sound!

On a secondary audio track, I’ll set my vacuum cleaner track up as the source, Post Mixer. This will allow me to record, in realtime, all of my noodling on the vacuum track insert effects. Next, I’ll loop my vacuum clip from the Command+L shortcut, after selecting the clip and press Tab to go in to the Session view. Here in the Session view, I’ll record arm the new Audio Track, and press a clip record button within one of the Clip Slots above. 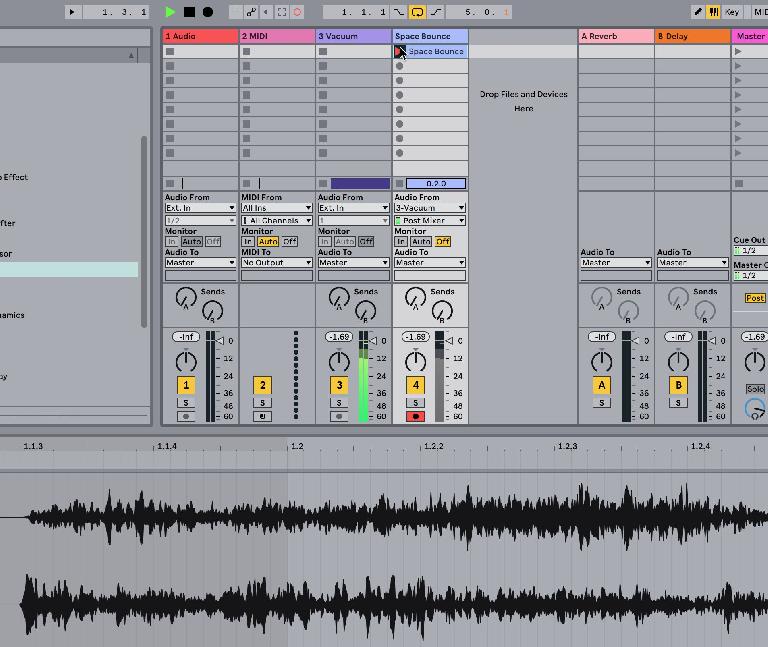 Then I can switch over to the inserts of the Vacuum Track and start tweaking Grain Delay and Auto Filter, while the new audio track records all of my movements. By switching around the waveforms within Auto Filter’s LFO section and playing around with the XY pad within Grain Delay in realtime I can sculpt new swoops and sounds with each repetition of the vacuum. 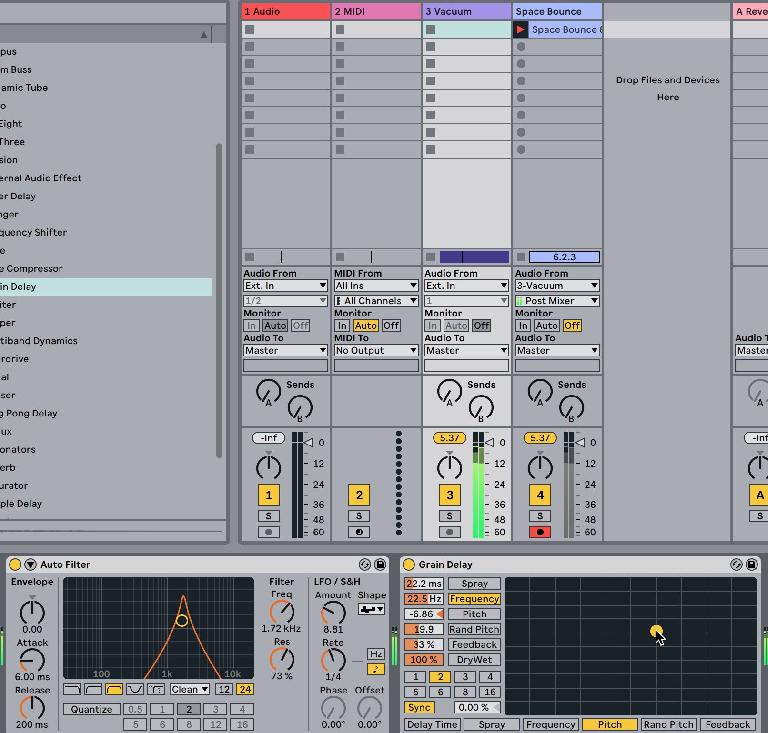 Once I’ve recorded enough material in the new audio track, I’ll copy the clip of the recording back in to the Arrangement view of Ableton Live. In this view, in my opinion, it’s easier to cut up each repetition of the vacuum and create new, individual sound clips from all of my recording, or recordings, if I do more than one pass. The Command+E shortcut for separating clips really helps here. I can also hover near the edge of a clip, while holding down Shift, and drag out the clip by warping it.

This, depending on which Warp Mode the clip is playing in, can have a drastic effect on the overall sound, and create some cool electronic textures in the process.

Once I have each of the swoops, sounds and effects cut into individual clips I can use the Shift+Command+R shortcut to render out each clip as its own audio file. Once they are all separated out as clips, I can sprinkle them into the remix, project, or new song of my choice and sculpt each transition effect further on, till it fits in, like this.

Textured sci-fi sounds add a lot of dimension and activity to a mix. Plus they just add a lot of character, which any mix could use. There are a million and one ways of making these kinds of sounds, but the most important part is that you have fun with it, as it totally comes out in the recording!