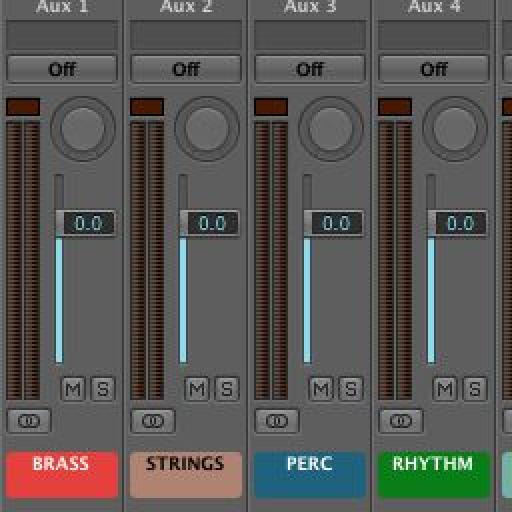 Language
Logic Pro expert author, trainer and film composer, Jay Asher, explains how to create stems in Logic Pro 9, and why this makes it easier and more efficient when it comes to the mixing process.

Creating stems is a task film and TV composers are frequently called upon to deal with. There are plusses and minuses to this: The good thing is that because the director or producer and picture mixer can decide which elements to use and how much to use of each, you may be less likely to have a cue mixed so low that it is inaudible or dumped altogether. The bad news is your musical intent can be totally distorted. Oh well, it comes with the territory.

How many stems? They will tell you. In a poorly budgeted project, they may only want a stereo mix simply because they do not have the budget to pay for the increased amount of time more stems requires the picture mixer to deal with. My favorite scenario is to give them a stereo mix with one or two additional stems that I have any concerns about being problematic for them when adding my music to dialog, like a melodic instrumental solo or high percussion, like hi-hats and shakers. Even though I am experienced and like to think I know how to do this without competing with dialog, experience has taught me that this is safer.

However, even if you are not a media composer, mixing from stems is a great way to go that I recommend, particularly if you are doing complex orchestral simulation.

Presumably, after you have entered in all your parts you spend a fair amount of time balancing, panning and automating within sections of the orchestra, like your strings for example. Ditto for brass, woodwinds, percussion, and rhythm section. If you are using a lot of different libraries to create your palette with lots of articulations, you may have as many as two hundred tracks. Typically, I have about sixty for this kind of work because I use a fair amount of software instruments that have patches with multiple articulations that I choose with key switching. As they say in internet-speak: YMMV (your mileage may vary.) As you no doubt know, mixing all this is the black hole of time. But let us say you are now at the stage where everything is in the ball park.

Now you are ready to fine tune your intricate masterpiece and maybe add more plug-ins. In my case, I use a lot of UAD plug-ins that I wait to add at the final mix stage because they are latency-inducing. Adding these can play havoc with my balances between the sections. Maybe I am content to put the same plug-ins on a whole orchestra section, like an EQ or a compressor or, in my case, the new UAD Studer A-800, which I have fallen in love with.

Either way, wouldn't it be easier to do your final mixing and automating with five aux tracks instead of perhaps sixty software instrument tracks? In the words of a prominent female political figure: “You betcha.”

Pic 1. Here you can see the woodwind instruments I am composing for in this piece.

Now I want to send them all to a bus which will be hosted by an Aux channel strip. This is really easy to do as Logic Pro 9 will do most of the work for us.

In Pic. 2, you can see that with all the woodwind software instruments selected, I navigate to the output assignment rectangle and change it from Stereo Output to a Bus, in this example, Bus 10. 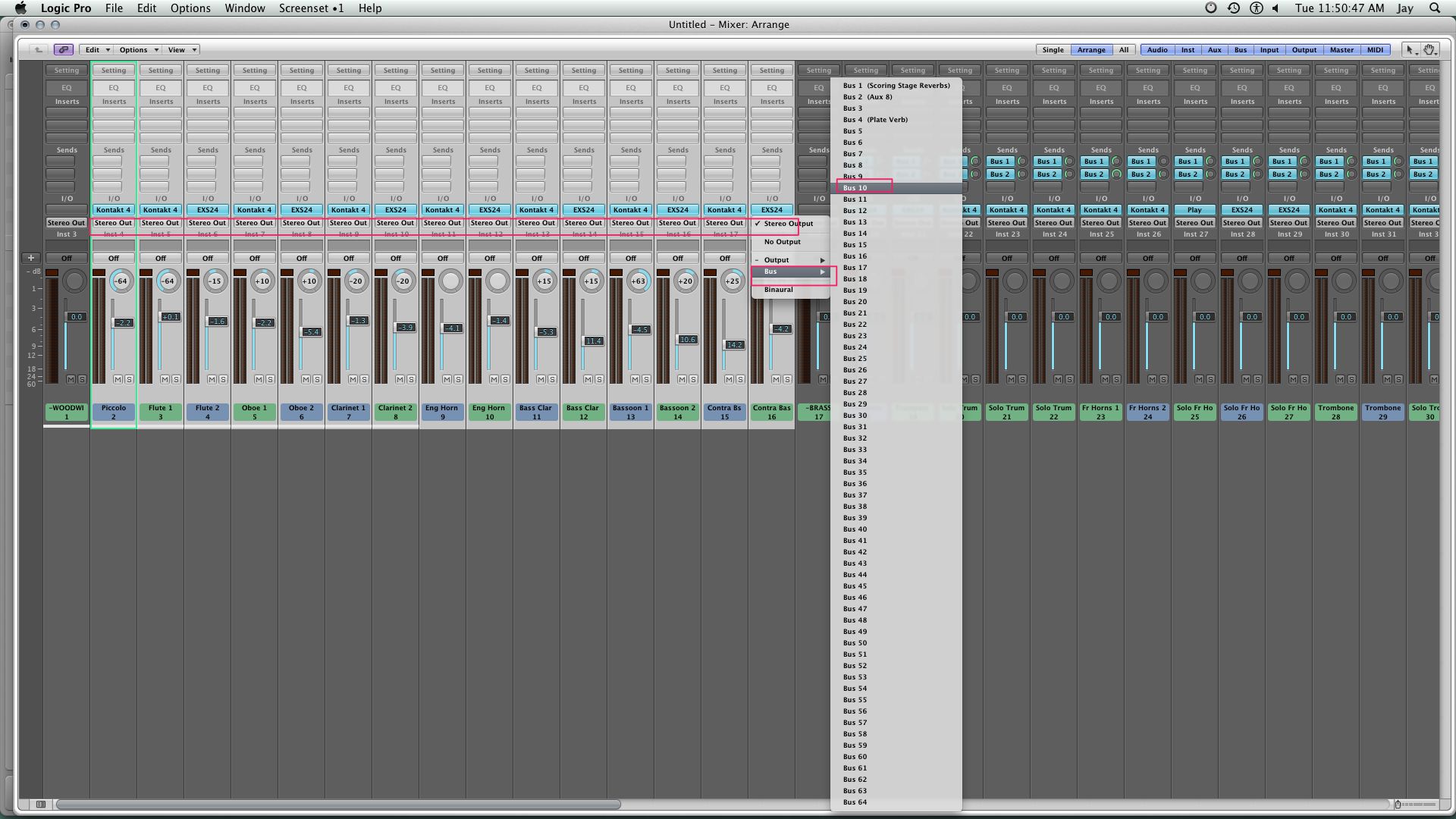 In Pic. 3, notice that Logic Pro 9 created an Aux with Bus 10 as its input which I subsequently renamed and colored. Now I can make my woodwinds louder and softer, automate the woodwinds mix, insert plug-ins, etc. to make it work in the overall mix, all with this one aux, without disrupting my previous work. 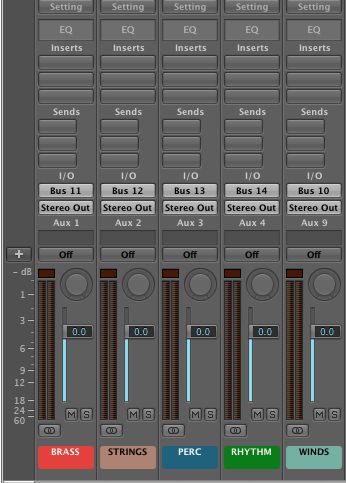 This is fantastic! I can now hide all the other tracks in my Arrange window if I like and only work with these five aux tracks to fine-tune my mix (as you can see  in Pic. 5). 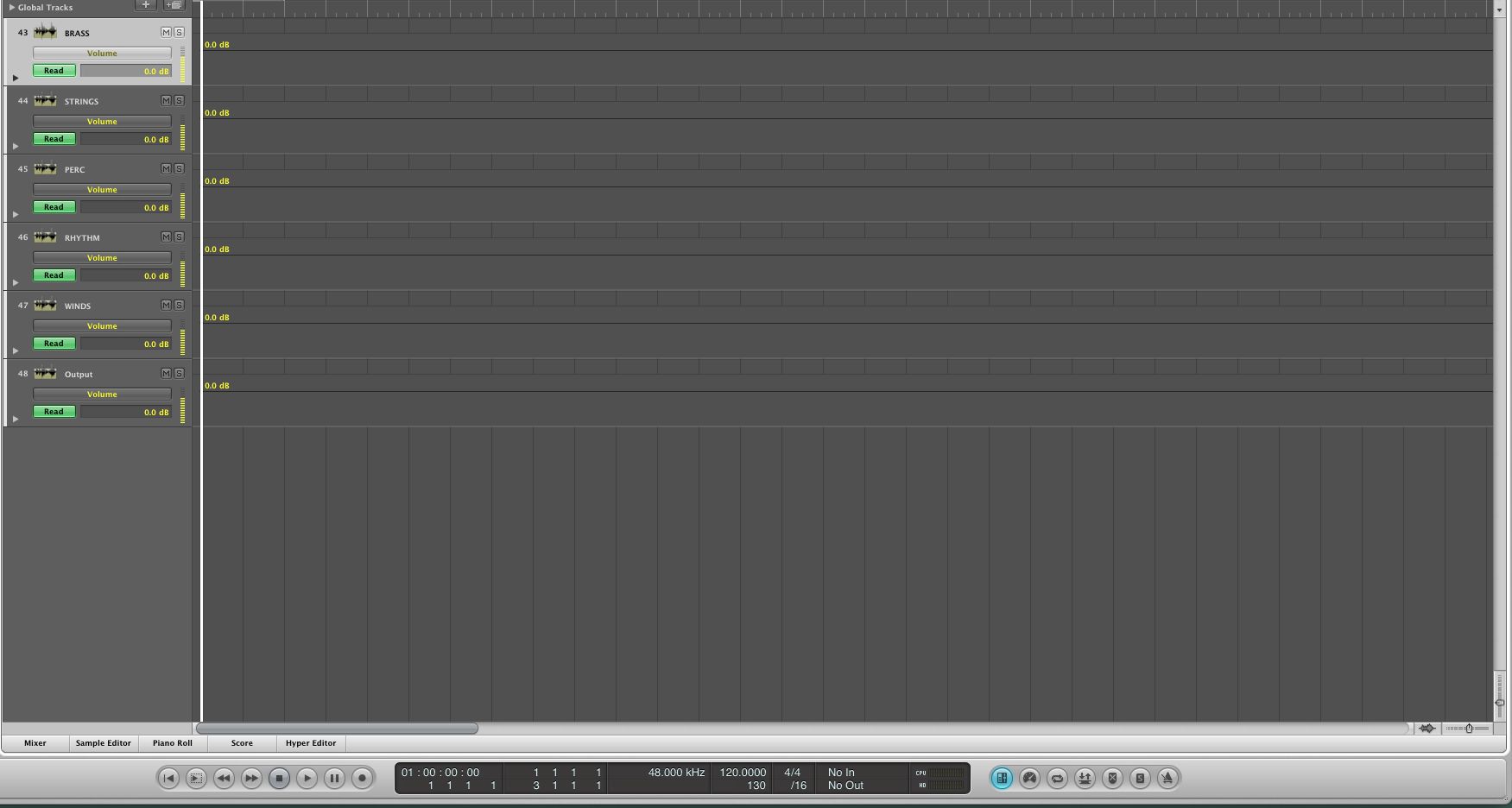 But I want to create audio stems now—even if I do not have to deliver them. To do this I can save my project under another version number and get rid of all the software instruments and any FX plug-ins that may be on them. This frees up my CPU power for any CPU-intensive mix plug-ins I want to use, allows me to raise my audio buffer for more CPU power without caring about the latency (that would have bothered me while playing the software instruments) and, if I am using a slave computer, it will no longer be in the picture. When I am doing my final mix, the fewer things I need to think about the better I do.

Once again, Logic Pro 9 makes this so easy: All I need to do is click the plus sign at the top of the Track List and tell Logic to create five stereo audio tracks with ascending inputs, record enabled, as you can see in Pic. 6. 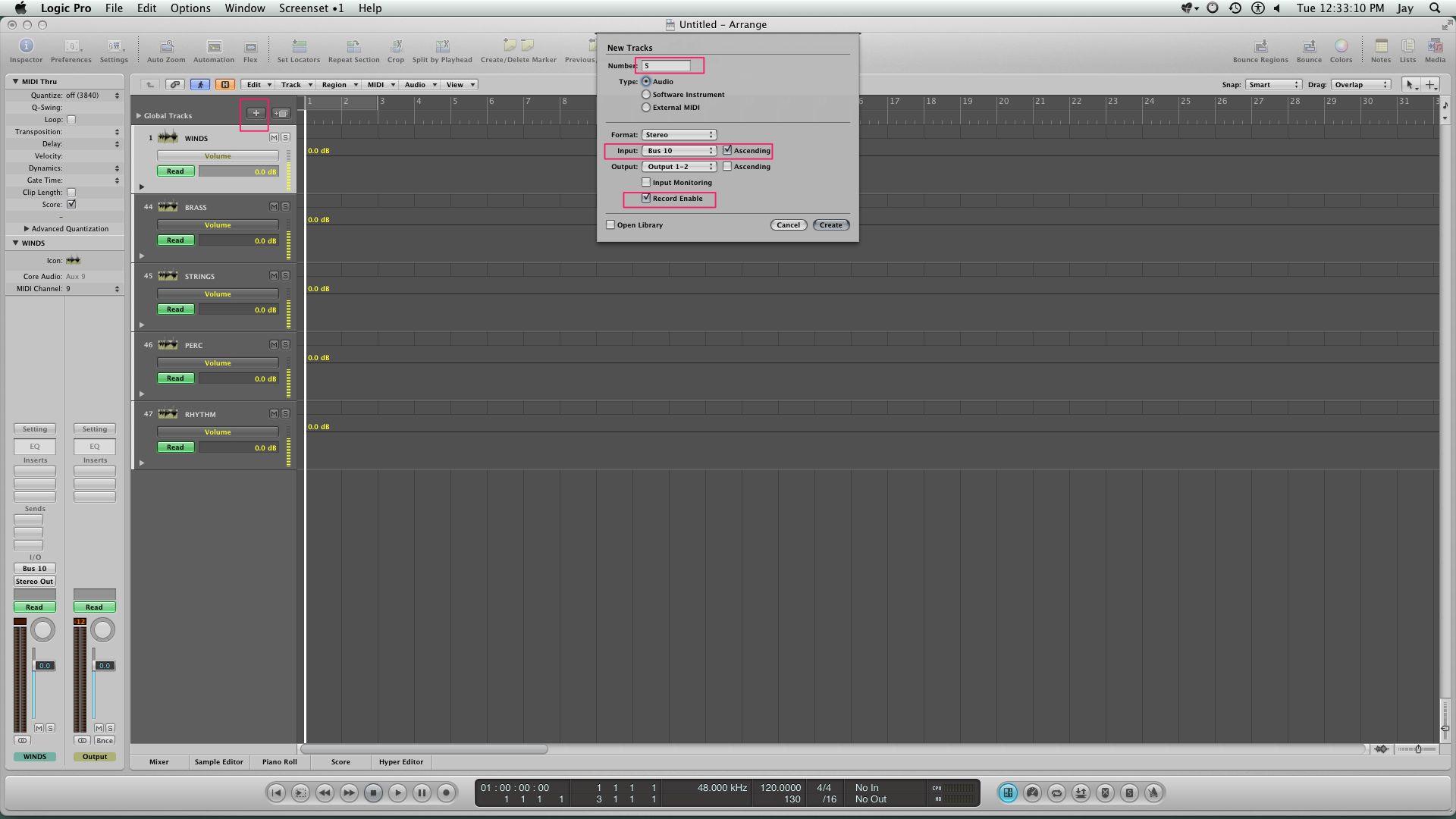 Pic 6. Audio tracks for each stem

After adjusting the project's length to the proper amount of bars (or drawing in a cycle), press record and now you have five stems. At this point, if it is going to a mix engineer you can simply send them to him or her or, if you are the mix engineer, start mixing. If this is a film or TV project you now will have the length of project stems that they may require.

skipstream
Thanks for that but in the last para of Section 2 you mention saving a new version of the project and deleting all your software instruments etc.
I don't get this. If you do that before recording into the stems then surely there is nothing to record into them?
Gary Hiebner
Great article, Jay!

Stem mixing definitely opens up other possibilities for the mixing process and allows you to focus better on the mix and have a more removed ear for the mix, instead of starring at 100 tracks.

Take a look here for tips on this: