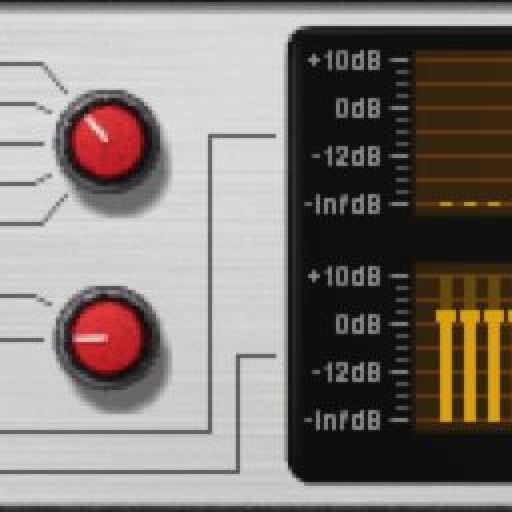 If you've ever watched any of my synth video tutorials, you'll probably pick up on the fact that there's almost always some kind of choir patch showing up at some point. I'm a huge choir fan. Why? I just think that they add such an ethereal, and angelic quality to music. And, because most of us associate choirs with mythic realms like heaven, valhalla, and so on, I think there's a certain joy brought about when choirs are present in music... Sometimes.

There are also certain types of choirs that evoke moods that are far from angelic, however. If you've ever watch 'The Omen', you'll note that the choirs alone can have you feeling nervous and twitchy. They build up in these eerie climactic ways to introduce scenes that really shouldn't be scary... But, the choirs make them that way. Try turning the volume down and watching 'the Omen', it's a completely different experience.

And, this leads me to a question for, you: Have you ever wanted to have some eerie, evil choirs of your own? Well, if the answer is 'yes', then you're in the right place. It's time to make a patch that can be cranked up and have your neighbor wondering if you're about to sacrifice a goat. Let's make some evil choirs.

So, for starters, go ahead and sing the lowest note that you can muster as you sample yourself into the NN-XT! While you're doing this, hold the note out for as long as you can. This just makes it easier to loop, later on. 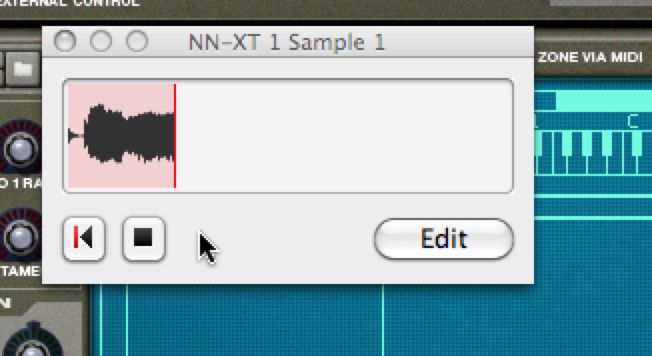 After you've finished your singing debut in to evil, go ahead and edit the sample so that you've got an extended loop. You want it just enough to sound natural. Though, even if it's a little off, we'll be able to mask it later. Don't worry. 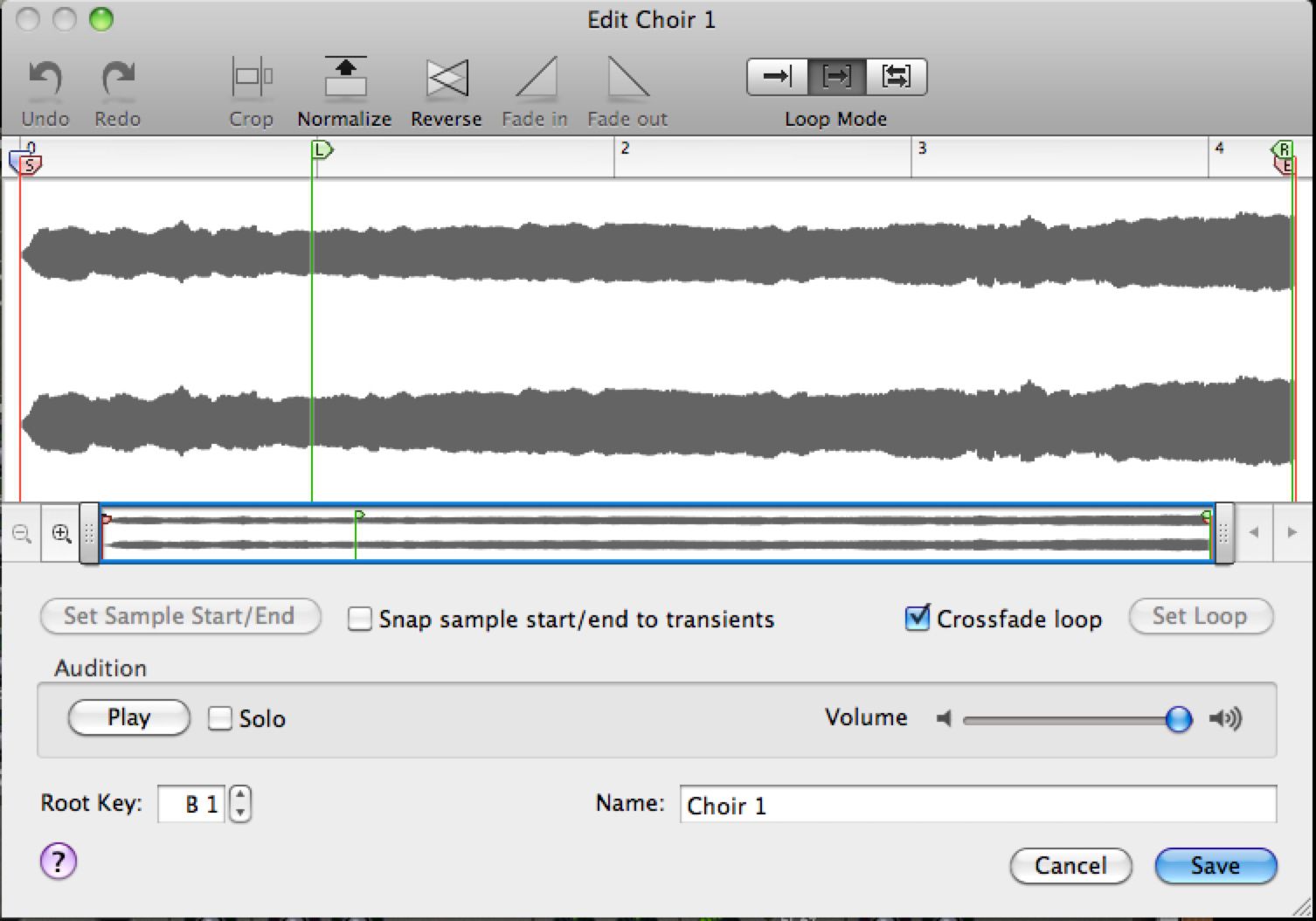 Here's my voice, just to give you an example:

See, nothing to write home about! But, where I may not be that great of a singer, I am a crafty sound designer. Let's see how we can augment this and make it better.

Oh, and before we go further, make sure that you right-click on the sample within the NN-XT and select 'Set Root Note from Pitch Detection'.

Now, it's time to make things a little bigger, and darker. To do this, we'll use the BV512 Vocoder to not only make us sound like we can sing, but also to add some complexity and layers. The easiest way to set this up is to create a BV512, a Thor, and a RV7000 reverb. As you create each device, make sure to hold down the Shift button. This will keep them from routing themselves automatically. Then, once they are all created, Combine all of the devices, with the NN-XT, into one Combinator. 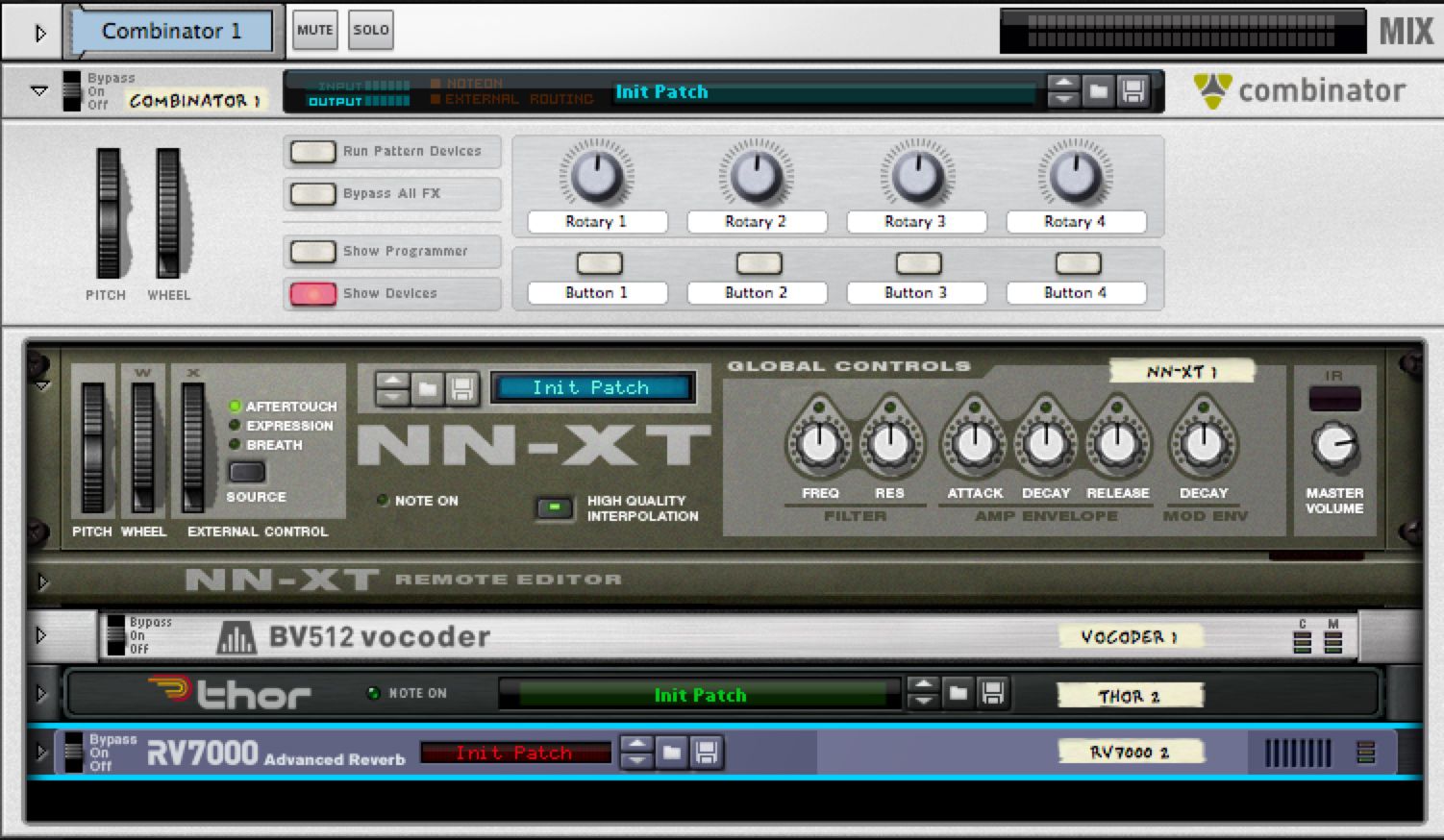 For this to work, we'll need to set up the NN-XT as the BV512's modulator, and Thor up as the Carrier signal. Using a vocoder to mask the source signal will make it sound a little more 'pro' and disguise the fact that we didn't make a multi-sample choir, which is usually the way to go. 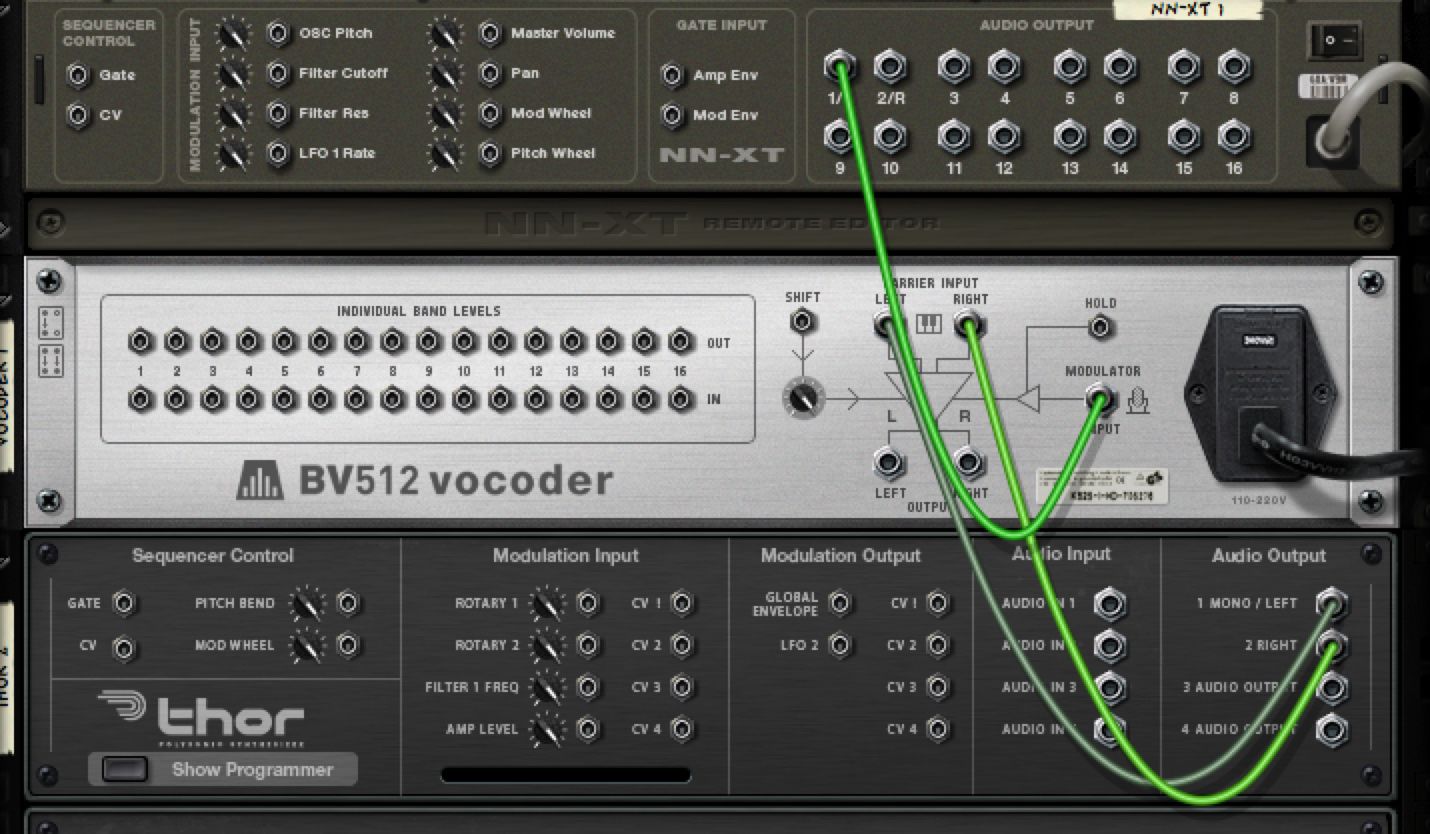 Now, route the output of the BV512 in to the RV7000. This will cause our choir to be good and wet. Plus, having a lot of reverb gives us more of an ominous sound. 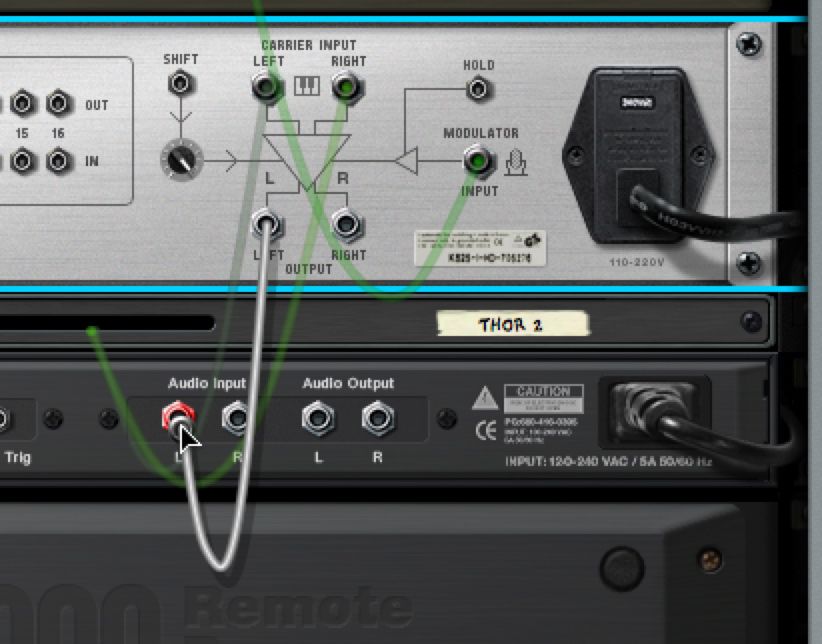 Finally, route the output of the RV7000 to the Combinator's 'From Devices' input... 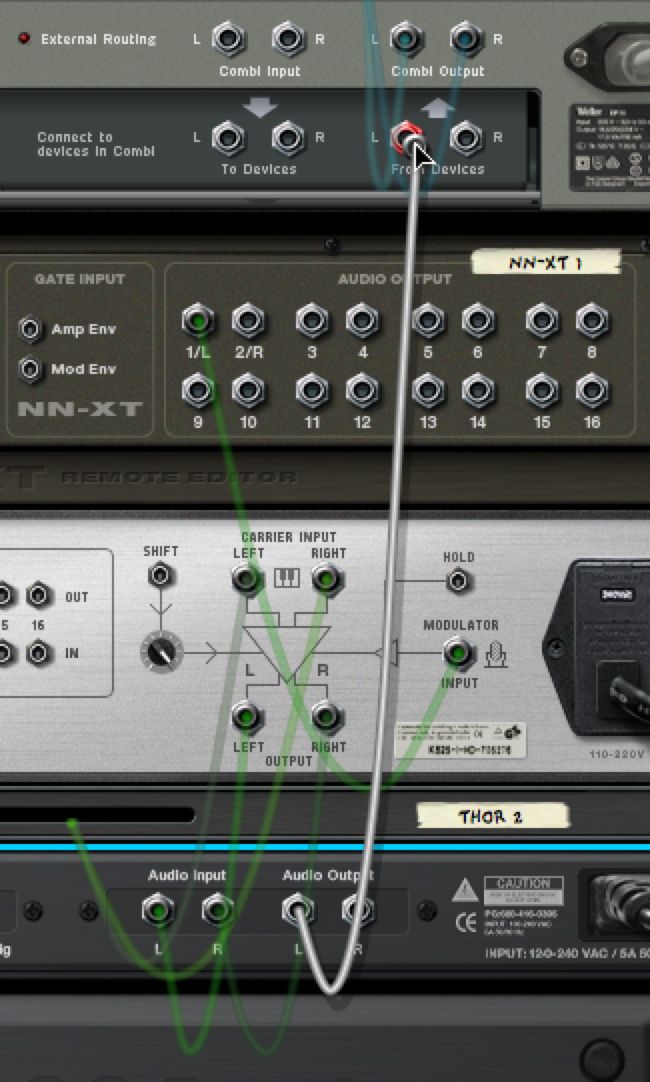 Now, when you play the Combinator, you will hear signal, but we'll need to make some major modifications.

Let's make this sound like evil! First, set your Vocoder up with a band count of 512. At this setting, our choir will sound much more 'real'. You'll also want to shift the formant down a hair. I would suggest playing with this after to get a sound you like. I'd also say that the Dry/Wet should be played with. Mixing the 'real' voice with the vocoded voices can make things a little more 'real'.

On Thor, set up two Multi Oscillators with a reasonable amount of Detuning. Also, just to add some octaves, make sure that you set one Multi-Oscillator one octave up. Detuning, as we go through the filter will go a long way to making the Choir seem more throaty. 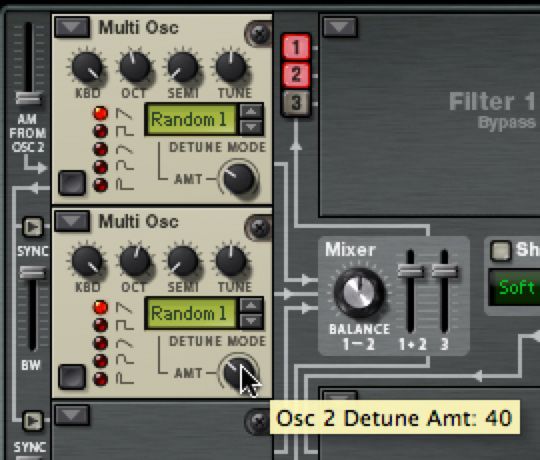 Next, set up filter 1 with a Formant Filter. Because the filter emulates a human throat, it really goes a long way in adding some more realism to our choir. You'll also note that you can change the vowel sounds with the XY pad. Find a vowel that works for you, or just automate the movement later to make some really eerie singing effects... Like 'the Omen.' Make sure to turn the filter envelope all the way down, as well. 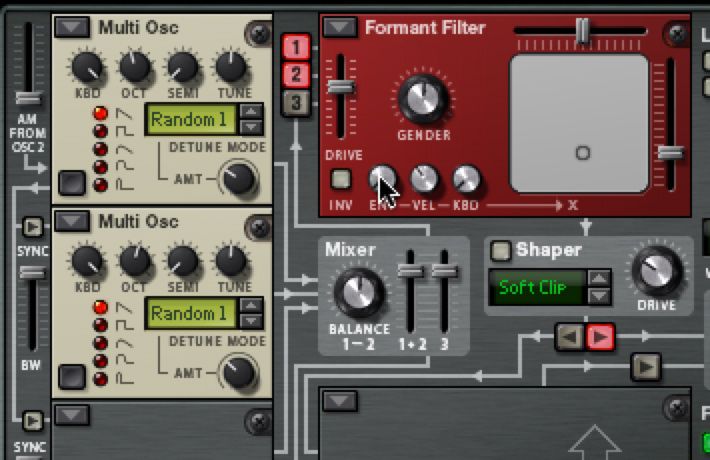 Finally, make sure and give a decent amount of attack, sustain and release to your Thor and NN-XT. Increasing the Attack will make the choir eerily ease in, increasing the release will make it more flowing and ambient. Keeping the Sustain all the way up will just keep it more continual. 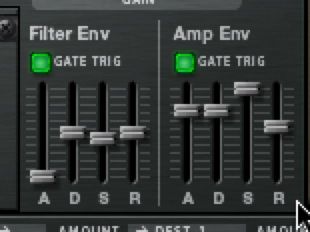 Finally, increase the hell out of Decay on the RV7000. We're shooting for huge, gothic, cavernous hallways here, within the devil's church!

Using the vocoder and the sampler together really can take a mediocre performance of evil to a completely different level of malevolence. You'll also find that it's not hard to add in some angels with the same level and add some real beauty to your music. Have fun you anti-christ, you!