Language
Electronic music is often accused of being stale / repetitive '" but using a few tricks in Live 9's enhanced MIDI editor, it's easy to create dynamic drum loops & get them ready for use in your tracks.

In this tutorial, we'll explore a number of techniques to make your drum patterns more intricate than ever and quickly set them up for easy triggering.

For the purpose of this tutorial, we'll begin with a simple Drum Rack on a MIDI track. I've used a custom Drum Rack of my own here, but any Drum Rack kit will do. To get started, I'll double-click the first empty clip slot on the track to insert an empty MIDI Clip.

By default, the clip will be one bar in length with a sixteenth-note quantization interval. By quickly widening the quantization grid to quarter notes using the widen grid key command (Command-2) twice, I can rapidly draw a four-to-the-floor house or techno kick drum with the draw tool by clicking in the note grid on the kick drum key in the first quarter note, holding the mouse down, and dragging right, to the end of the bar. While all the notes remain selected, I can turn off Draw mode by pressing B and click and drag up in the velocity channel to bring them all to maximum velocity (Pic 1). 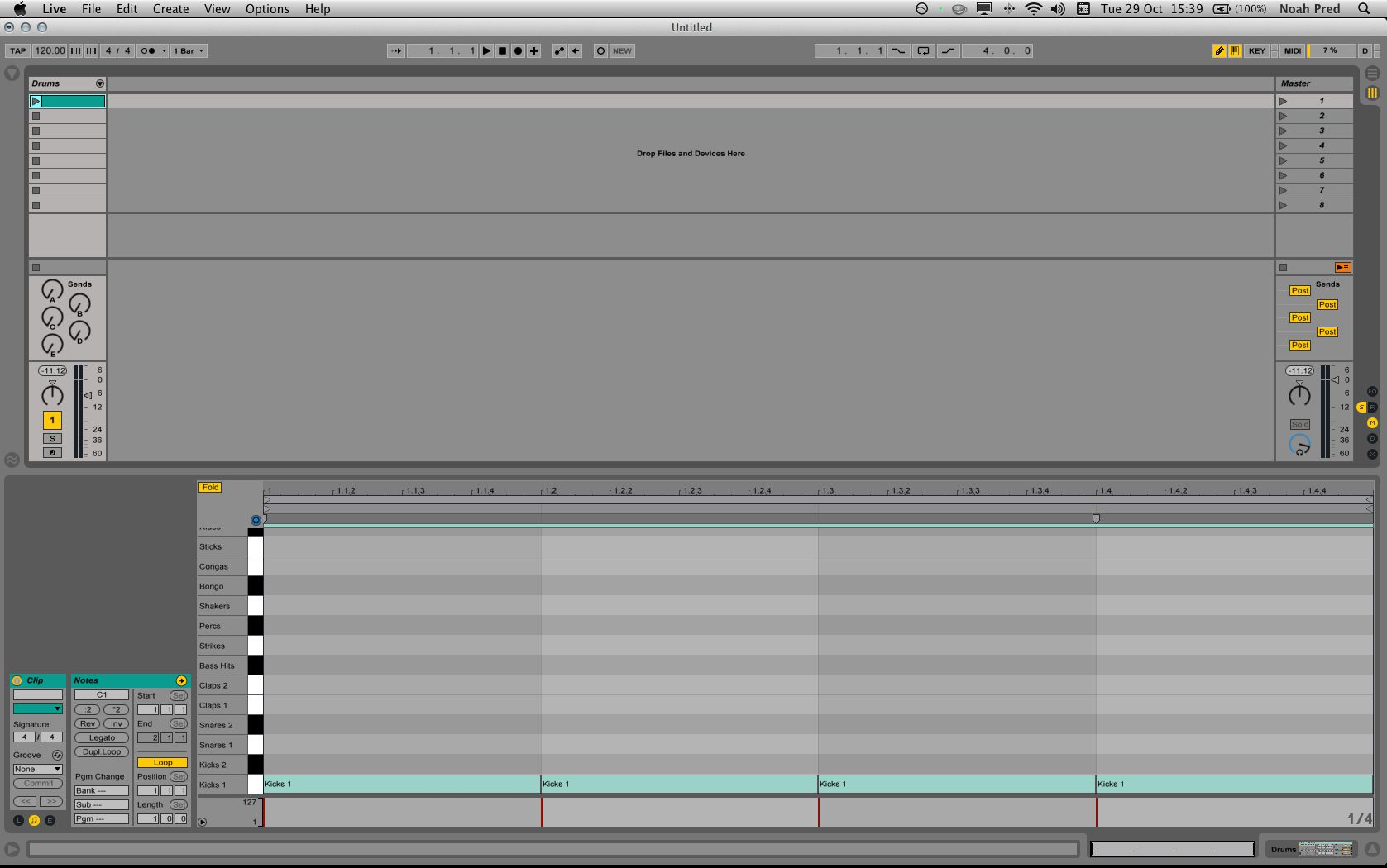 Before switching to a narrower timing grid, I'll add my claps on the downbeat accents on the second and fourth quarter notes. Once I've written them in, I'll switch to the editing tool, select both the claps, and drag them ever so slightly off the grid, to the left, so they're a bit early – which gives the insistent feeling of “pushing” the beat forward (Pic 2). 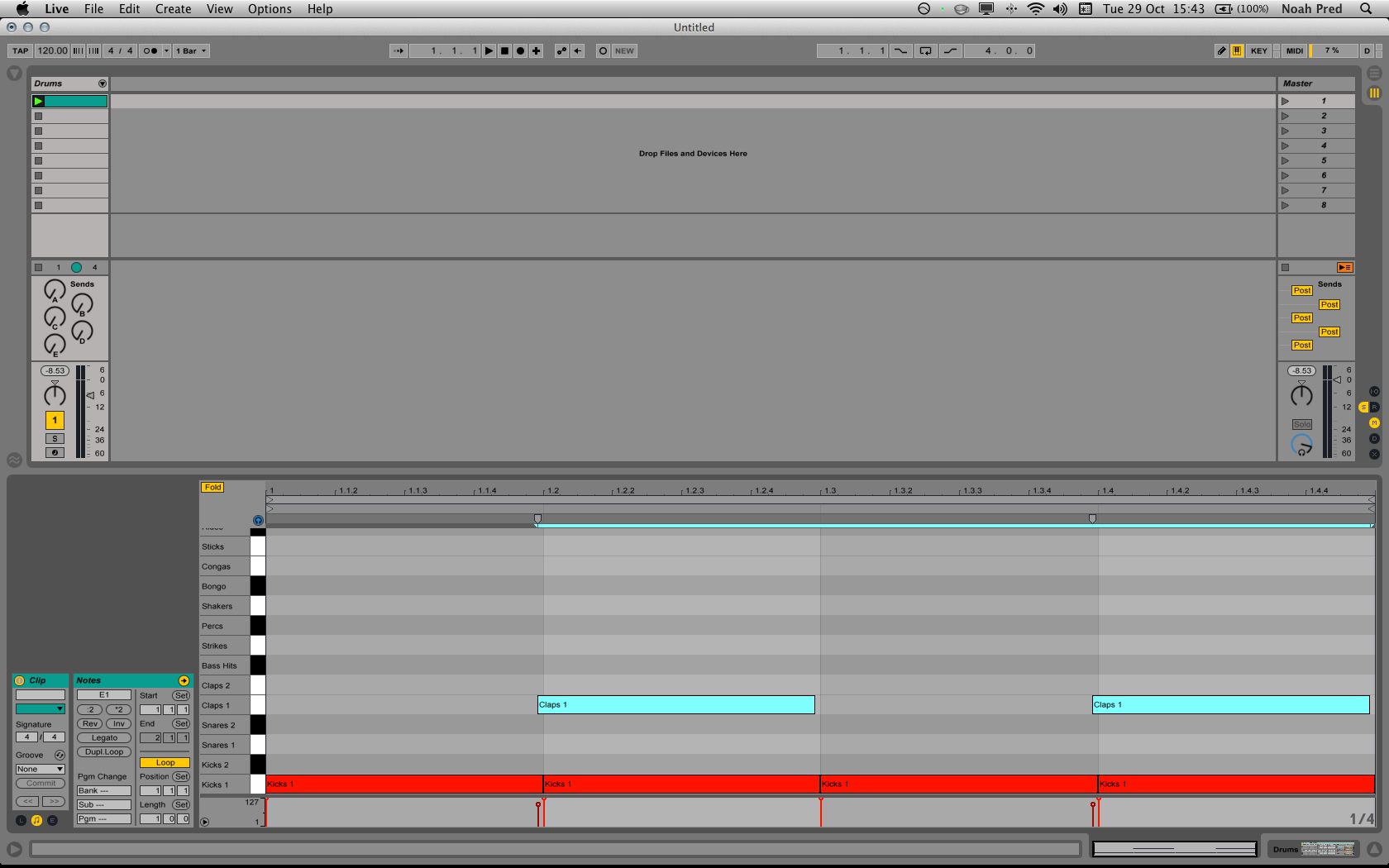 PRO-TIP: Using the edit tool, click a note to select it, then drag it left or right to move it forward or backward on the grid, up or down to move it to a different key or drum pad, and hover over either the front or back edge of the note - until you see the bracket symbol - to stretch the note duration in either direction; you can also use the arrow keys to move a selected note or notes up, down, left or right within the MIDI editor.

Now, I'll switch to an eighth-note quantization grid by either right-clicking in the note grid and selecting that option from the context menu, or by striking the grid-narrowing hot keys: Command-1. At this point, I'll add some percussion hits on the off- or up-beat eighth-notes (Pic 3). 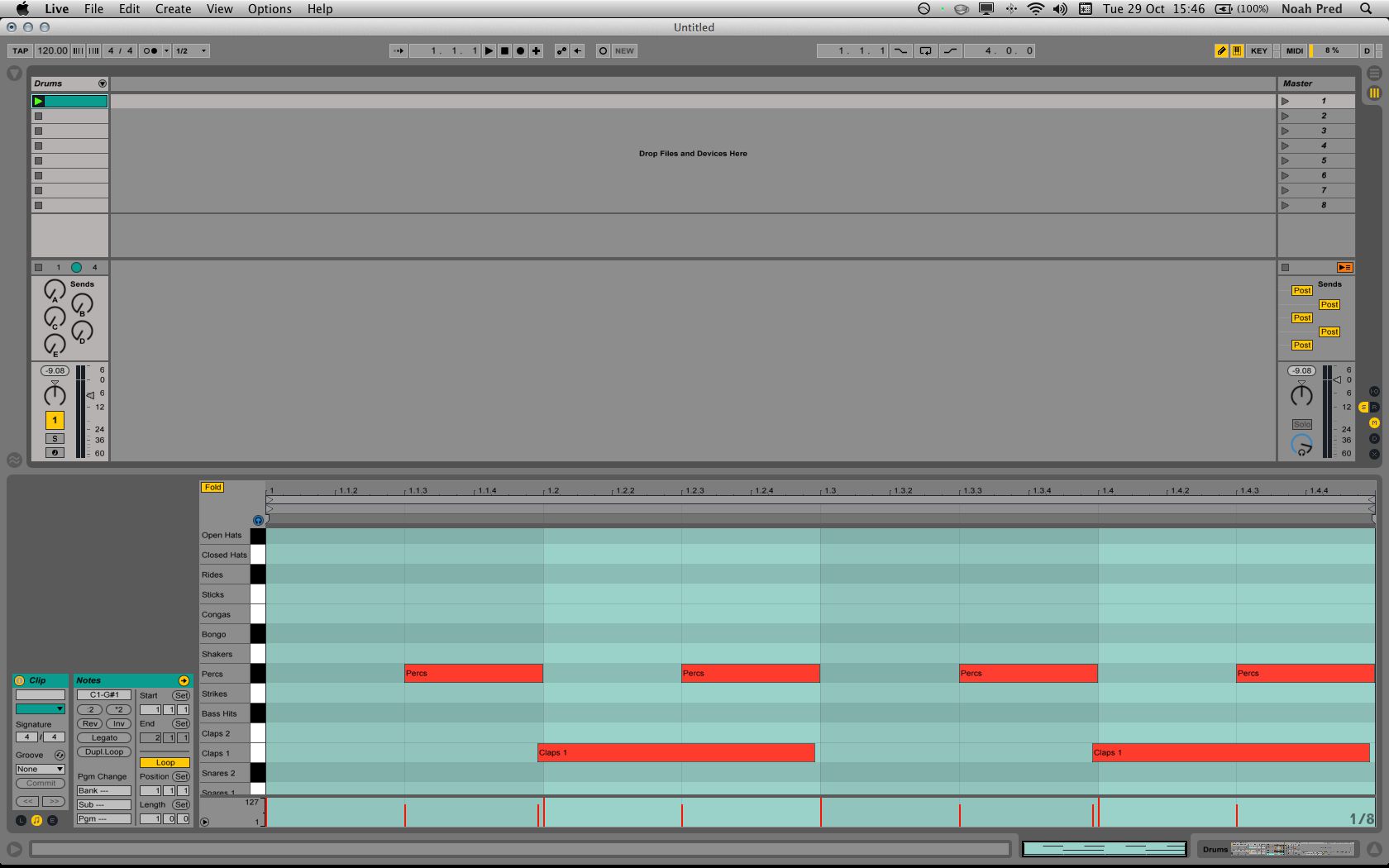 With our basic rhythmic backbone in place, I'll switch to a sixteenth-note grid by using the narrow grid key command (Command-1) one more time; if in doubt, the current grid quantization is always displayed in the lower right corner of the MIDI editor.

Within the first beat, I'll write in four consecutive sixteenth-note shakers with the draw tool. When you click to create a note, you can hold down the mouse and drag down to reduce velocity, or drag up to increase it; doing just that, I've written my shakers so that the upbeat has the most emphasis, the downbeat has the least, and the sixteenth-notes are somewhere in between. The velocity of a note is reflected in its color, with higher velocity values being brighter red and lower values closer to white (Pic 4). 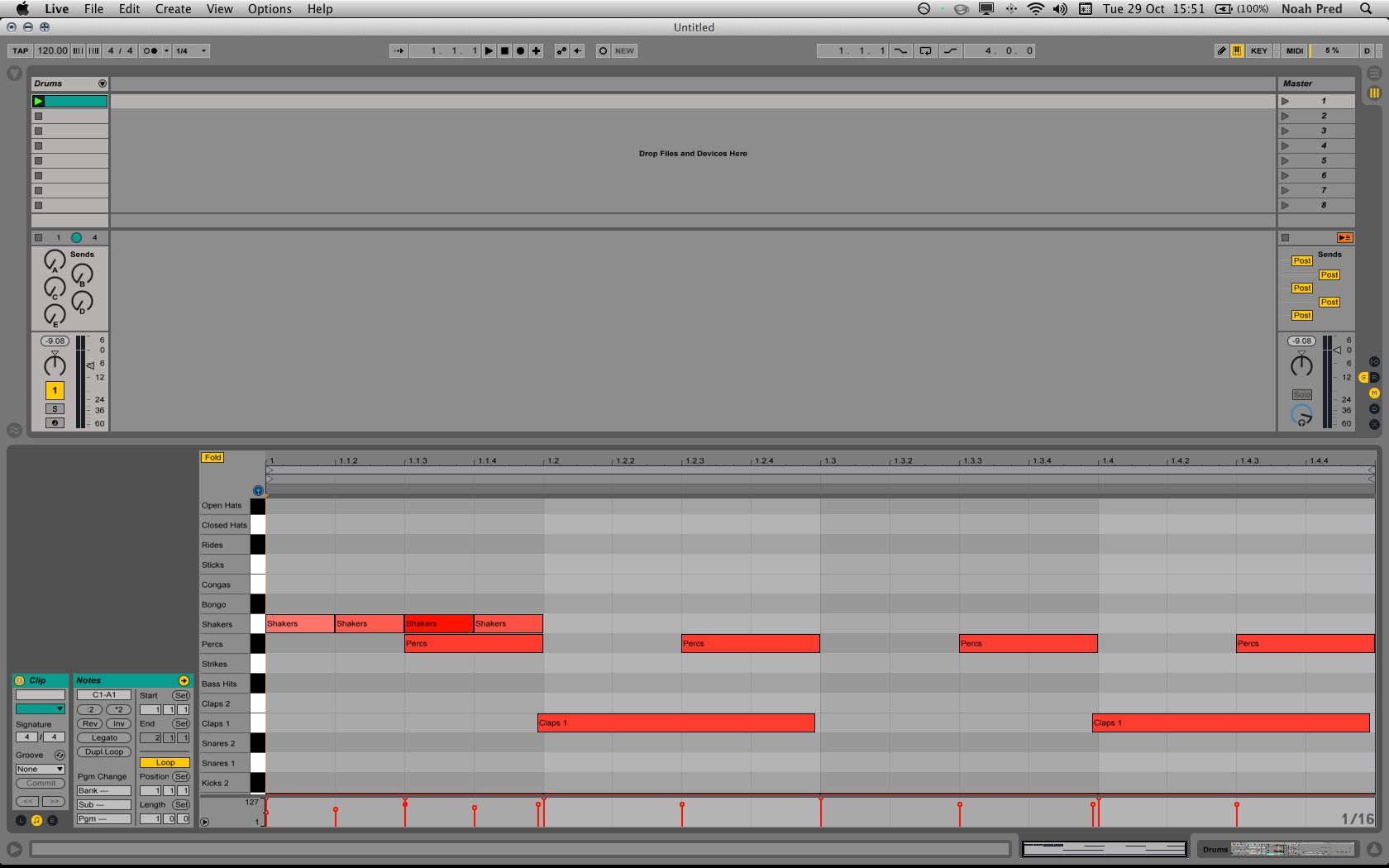 I'll now select just this set of four sixteenth-note shakers and use the duplicate command (Command-D) three times to copy this velocity-enhanced pattern throughout our one bar clip (Pic 5). 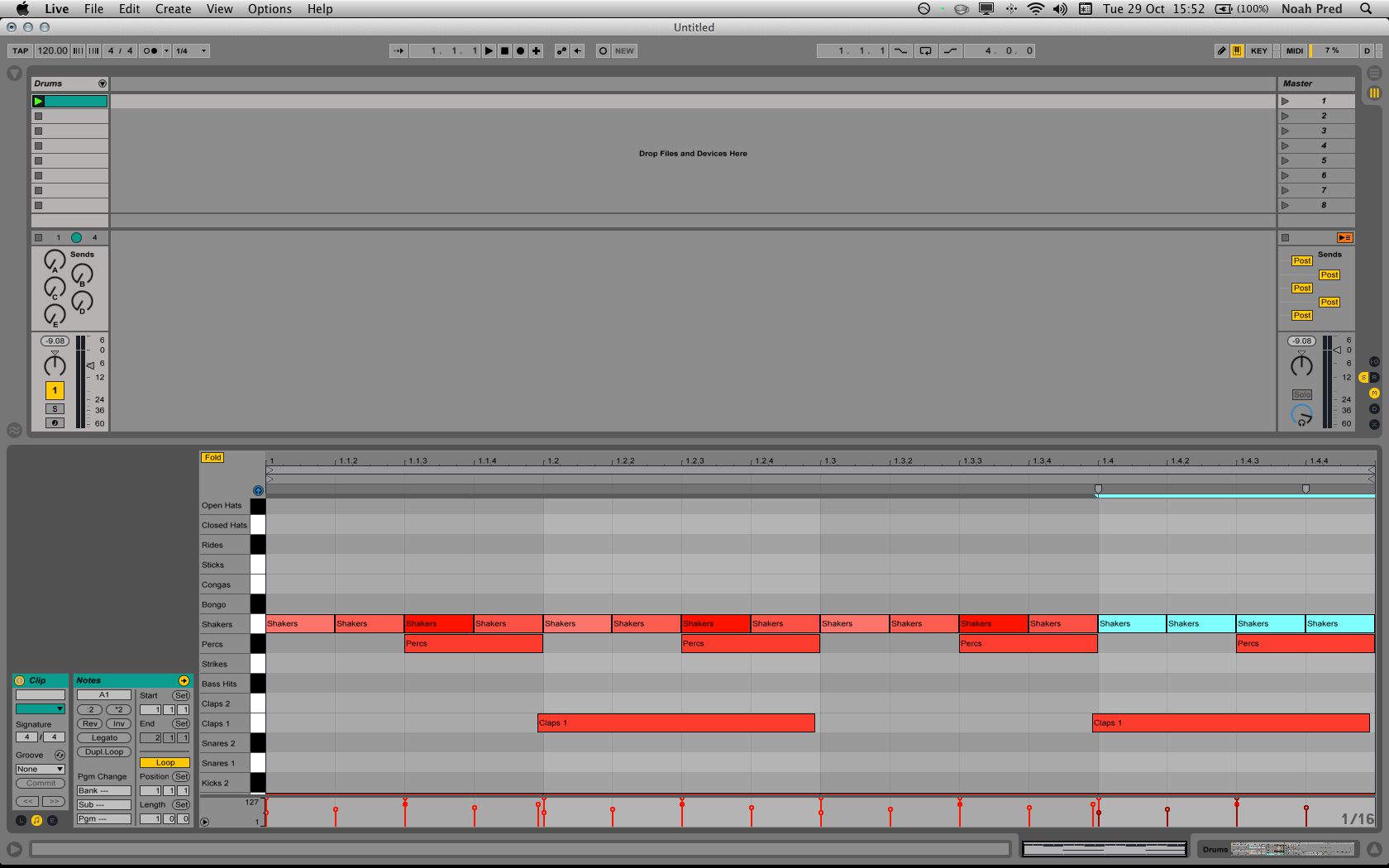 PRO-TIP: Select a span of time including notes on one or more keys by clicking and dragging the edit tool within the MIDI editor; if unused spaces in the timing grid - called rests - are selected on either side of the selected material, these empty spaces will be duplicated or copied along with the selected note data – so if you don't want that empty space to be pasted along, be sure to not select it. The selected time span is displayed by the light blue bar along the top of the note grid, and selected MIDI data will be pasted to wherever the flashing vertical orange insert marker is located; to move the insert marker, simply click within the MIDI editor just in front of the desired note interval.   At this point, I'll make sure the entire clip is selected by clicking the loop brace, and I'll now hit Command-D again – or click the Dupl. Loop button in the clip note settings to the left of the note grid – to duplicate the duration of the clip and all the data contained therein from one to two bars. Then I'll draw in a similarly velocity-edited closed high-hat pattern that's five sixteenth-notes in length (Pic 6), select those five sixteenth-notes of high-hat, and duplicate them throughout the clip. (Pic 7) 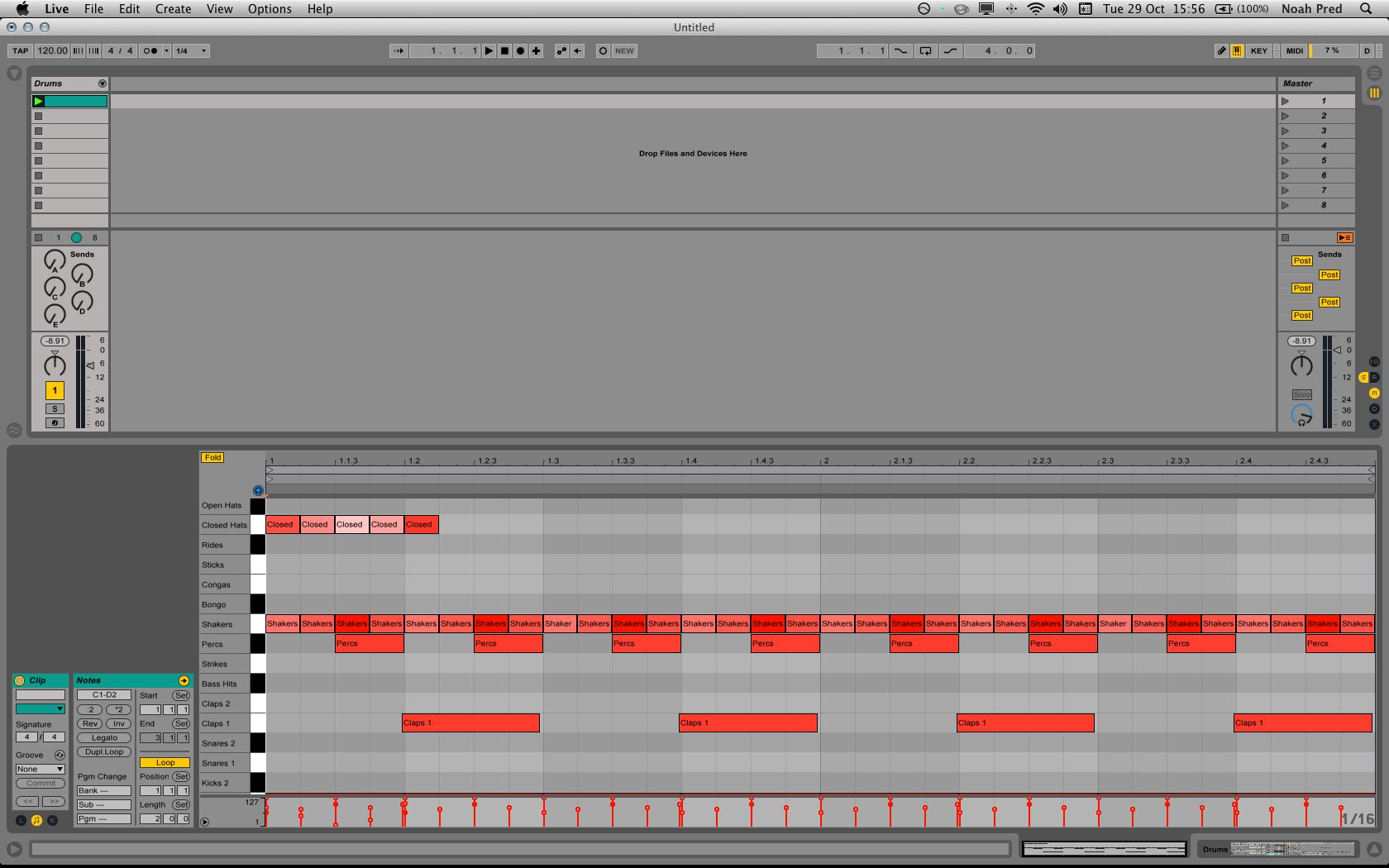 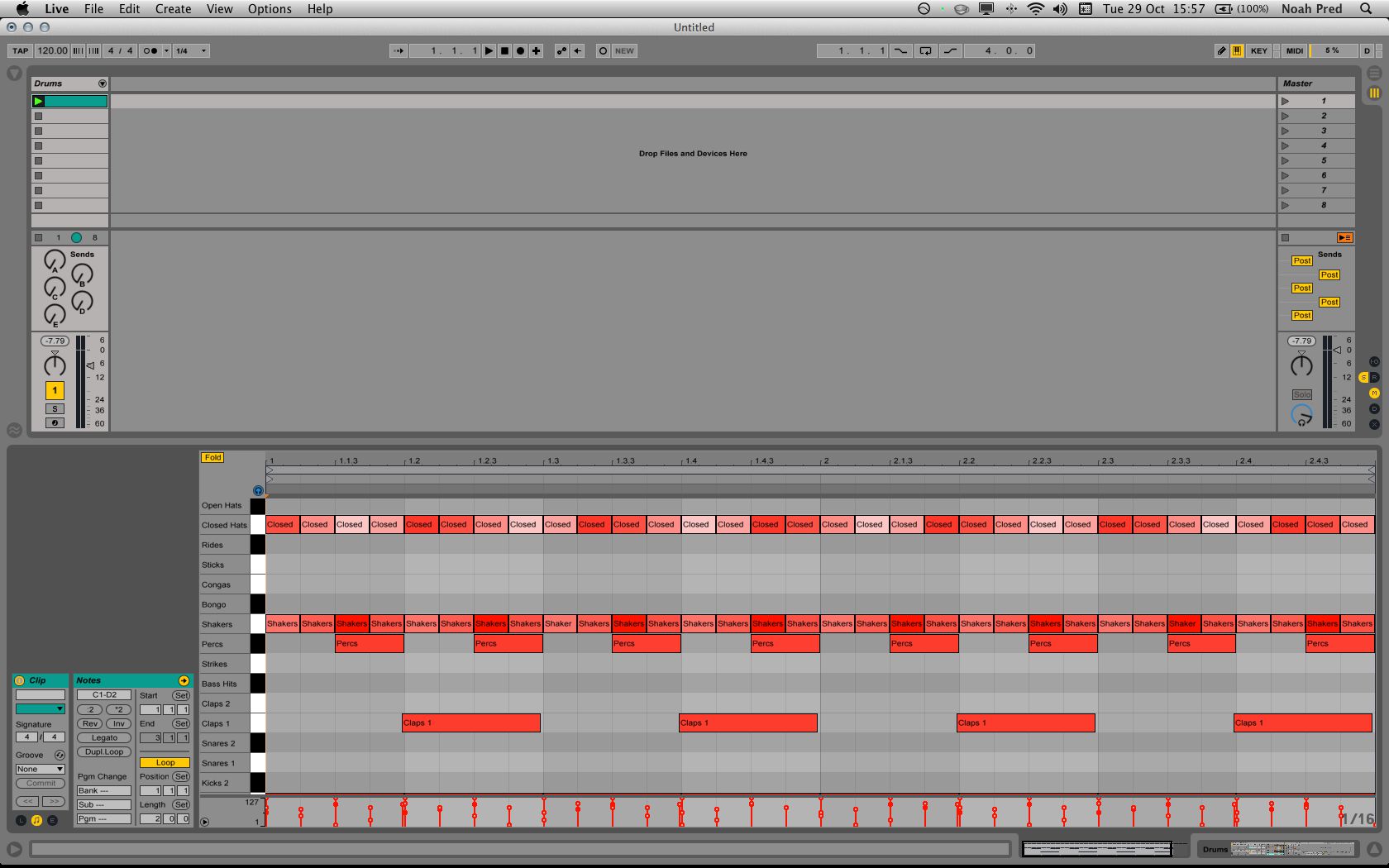 Our rhythm remains fairly straightforward at this point, so now it's time explore the space between the beats. Before expanding the duration of our pattern, I'll add some key syncopated accents that I still want to repeat within a two-bar phrase: I've added new notes on the Stabs, Open Hats, Rides, Sticks, Congas, Bongo, Bass Hits and Snares 1 drum pads. Since the Closed and Open Hats reside on the same Choke Group, I've deleted the Closed Hats where I want the Open Hats to play through (Pic 8). I've placed many of these new notes on sixteenth-note intervals that fall between the eighth-notes; this technique is known as syncopation, and it gives many rhythms their groove.

Now that I probably have enough sounds to build a drum track with, it's time to make our pattern more dynamic. With the full clip selected, I'll hit Command-D to double the length and note data to four bars in total. I've added some entirely new hits throughout these four bars on the Strikes pad, and then in the last two bars of the pattern, I've added in another Open Hat, another Stab, changed the length of some Rides, added a second Clap on the final quarter note, and drawn in a short little sixteenth-note roll on the Snares 2 pad (Pic 9). 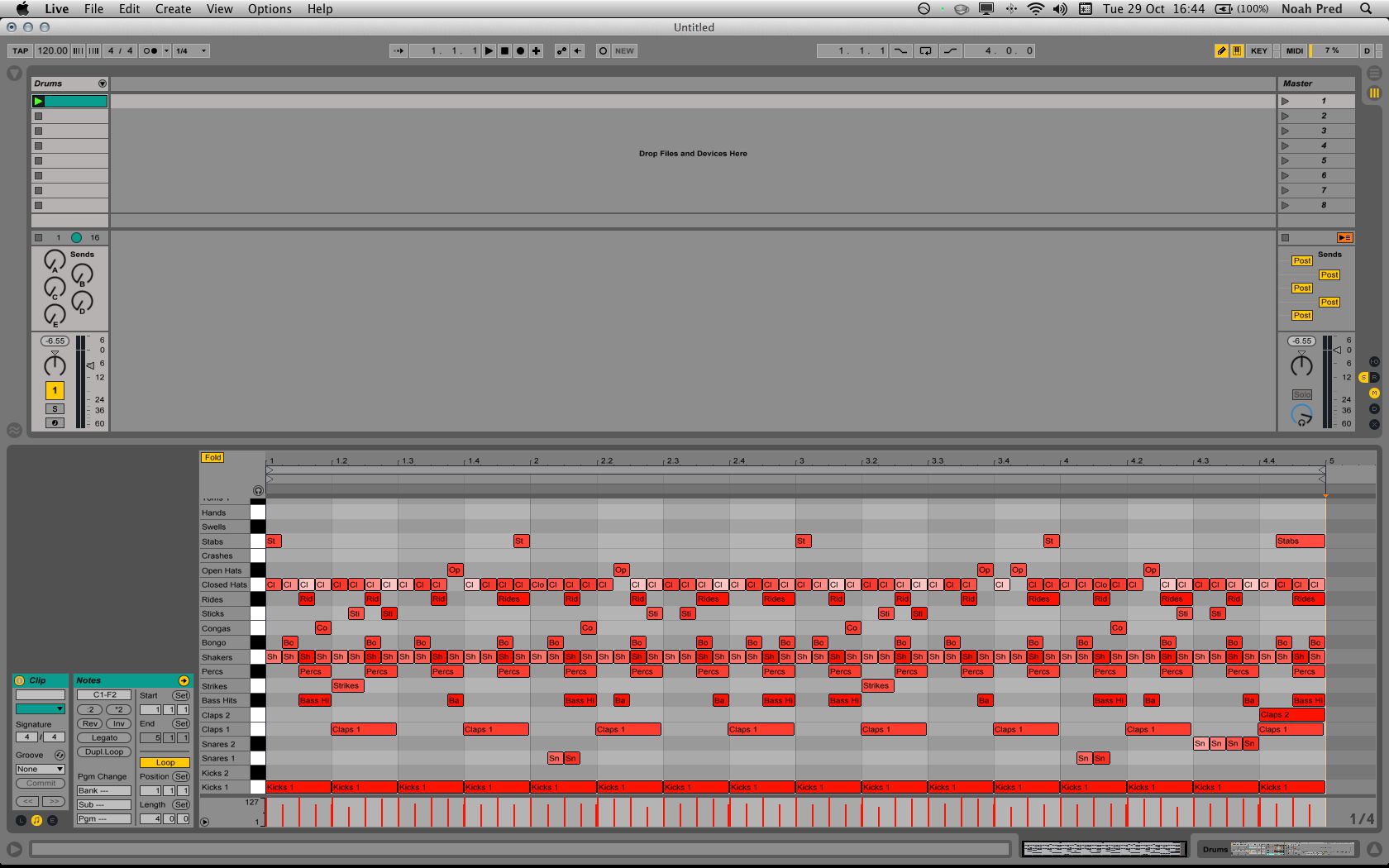 Four bars is cool, but you know what's cooler? Eight bars. So I'll double the clip length again as we've done twice already above, and make some further changes towards the end of the resulting eighth bar of the pattern: namely, adding some extra Open Hats and Snares (Pic 10). 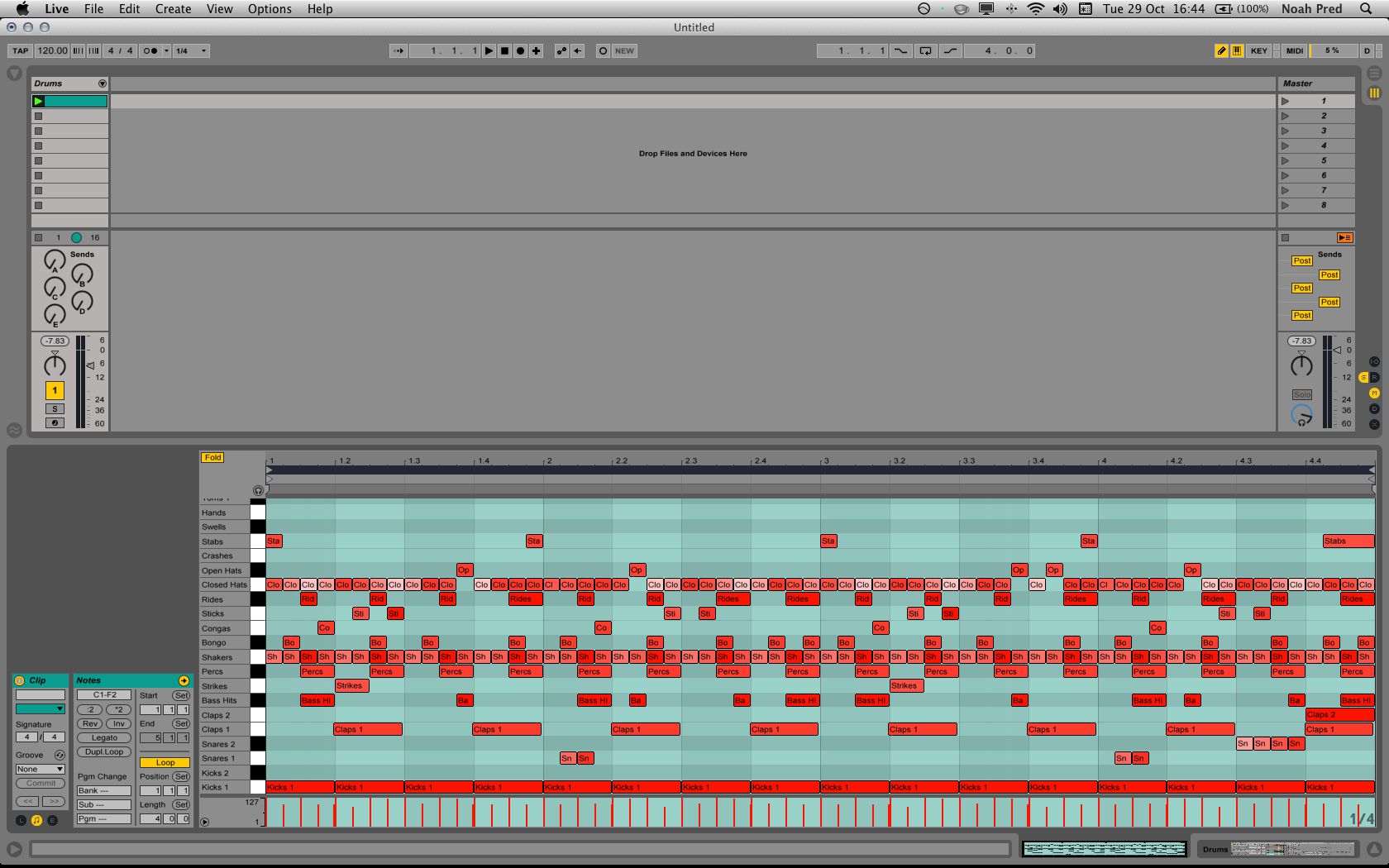 You know what's even cooler than eight bars? That's right: sixteen bars. So I'll double our clip one last time using Command-D or Dupl. Loop and use two of the new MIDI editing options to make some changes at the end of our sixteen bar phrase. Selecting almost arbitrary notes within a relatively small region – less than a quarter note – I'll click the Rev notes button in the Clip Notes area to the left of the note grid, just above the Dupl. Loop button, which will reverse the sequence those selected notes are played in. Then, selecting a similarly small set of different notes, I'll click the Inv button located just to the right of the Rev button to invert – or vertically flip – which drum pads are triggered. Results may vary, but I've succeeded in getting some interesting rhythmic changes I probably wouldn't have created on my own. I've also added a Stab by holding down the Option key while clicking and dragging to copy it to a new location, and changed some Ride note lengths in the final bar as well (Pic 11). 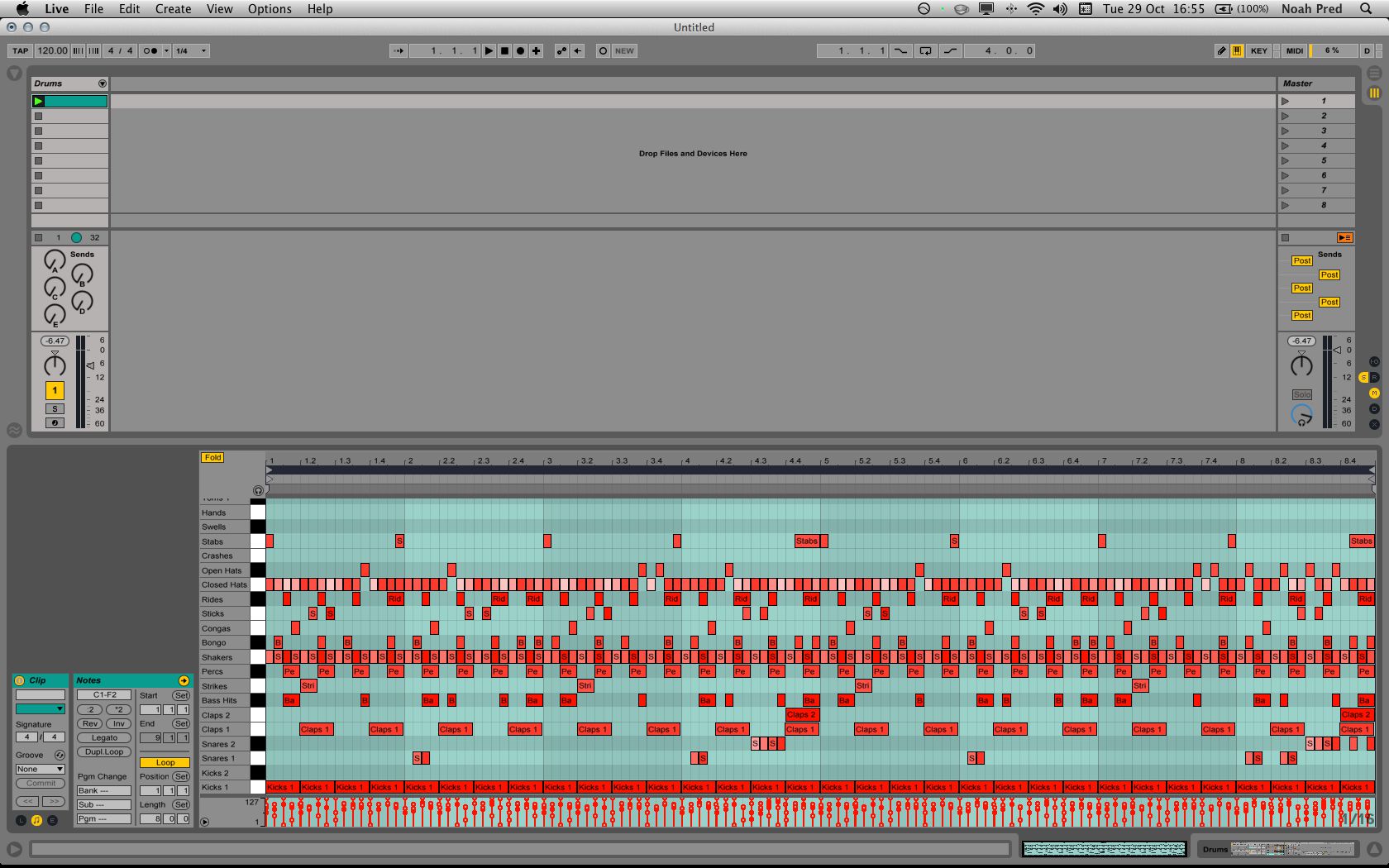 We now have our “master” drum clip: it contains all the patterns we're likely to use in the course of this track. Now I want to identify which parts I'll want to start the track with and deactivate all the other notes. I can select all the notes within a pattern that are contained on one key or drum pad by clicking the key button at the far left of the MIDI editor note grid; if I hold down the Shift button and click other keys, I can select all the notes on multiple keys, one key at a time.

Using this method, I've selected everything except for the Congas, Bongos, Claps, Snares 1, and Kicks, and then struck the “0” key to deactivate them; as of Live 9, the number zero key toggles activation of any selected notes or clips on or off. By deactivating these notes, they remain in place within the clip but won't actually trigger any instruments unless we reactivate them (Pic 12). Next, I'll rename the clip “Intro Beats”, (Pic 13) and duplicate the clip to the next available clip slot in the Session View. Now looking at the MIDI editor for the second clip, I'll activate the percs and rename it “Add Percs” (Pic 14). I'll repeat this process, duplicating that clip, activating the Shakers, Sticks and Snares 2 within the newest one, renaming it “Add Shakers” (Pic 15). 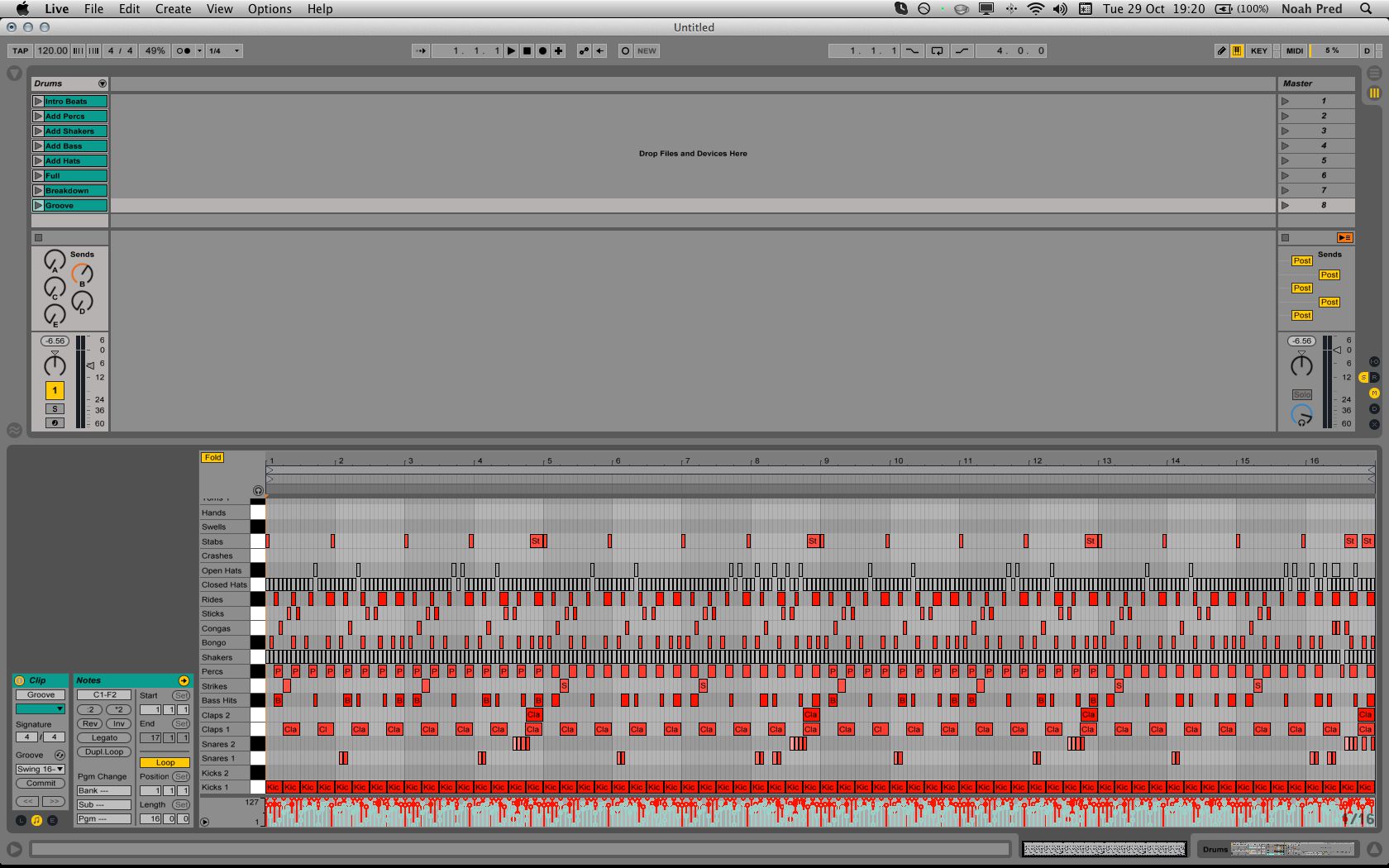 We now have more or less a full song's worth of drum patterns ready to go. By using these MIDI editing techniques to build patterns, and then duplicating the master pattern to new clips with various combinations of notes activated, you can assemble your own array of percussive patterns with style and ease. Apply some Grooves from the Groove Pool and it'll get even funkier. Just remember: syncopate, duplicate, activate!

JOHN J VILLA
Guys tnks for the great job you do for free, would you please give us a link where we can download this project. Really thank you very much
soundcloud/jon8beats
bug56
Wow terrific beats! I totally agree electronic music has gotten a bad rap as far as percussion goes - it's definitely worth the extra time to add more velocity, variation, groove and rhythm, as well as fx processing to really vary it up.
Randolph
Hey man, How's it going?

I have a request for a tutorial I think many people would be interested in learning. Supposedly this technique only takes about 3-5 minutes once you know how to do it.

I already know how to layer kicks, but this technique takes it to a new level.

The whole thread is interesting but even with all the tips given throughout the thread, It's still difficult for people to fully understand.


P
Hey i just wanted to create this account for the sole purpose of thanking you for this information. it is very helpful and wanted to show my gratitude.