Logic now has new instruments in the Library that include Articulation Sets. In this tutorial, Jay Asher shows you how to achieve more natural sounding orchestral parts for any MIDI instrument.

For those of us who create music with software instrument libraries with instruments that contain multiple articulations, especially but not limited to orchestral instruments, it has always been a challenge. If it is a keyswitching instrument, with articulations triggered by certain notes, sure, you could simply play it in real time, or add them afterwards and do it that way. The problem is that if you stopped and returned to another place in your project, until it sees the keyswitch for the change, it will stay on the one it is on, which is a drag.

Here is an example with one of my favorites, Fluffy Audio’s John Diamanti Fox Solo Clarinet. 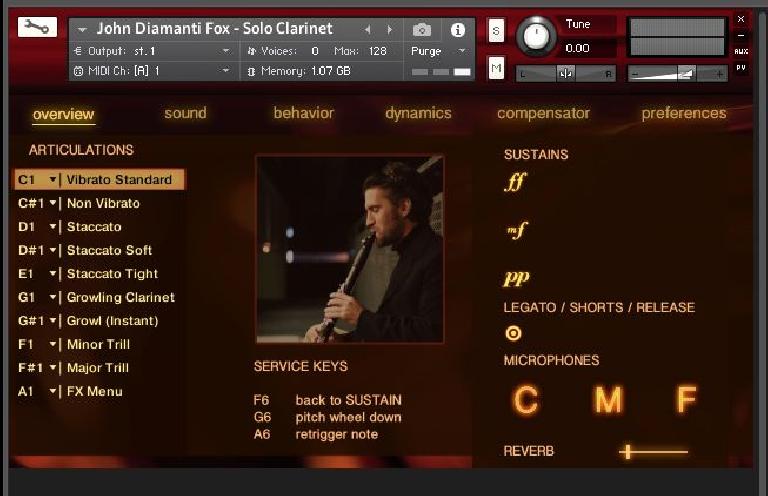 It sounds fine, starting with a legato and changing to a staccato just before bar 5. But if I stop and playback from measure 3, I will not hear the legato but still the staccato, because it did not see the keyswitch note.

Cubase had a solution called Expression Maps, but Logic Pro users have had to turn to third party solutions that were developed by some clever guys and there is still some advantages to using them, but it is no longer absolutely necessary, as Logic has introduced Articulation Sets that use Articulation IDs to trigger the notes so that you always hear the correct articulation anywhere in the song, even if you simply click on the note in a MIDI editor.

Logic now has new Studio Strings and Horns in the Library that include Articulation Sets. To illustrate this, let’s open one of the new new Logic software instruments that already have a set created, the Studio Violins 1. 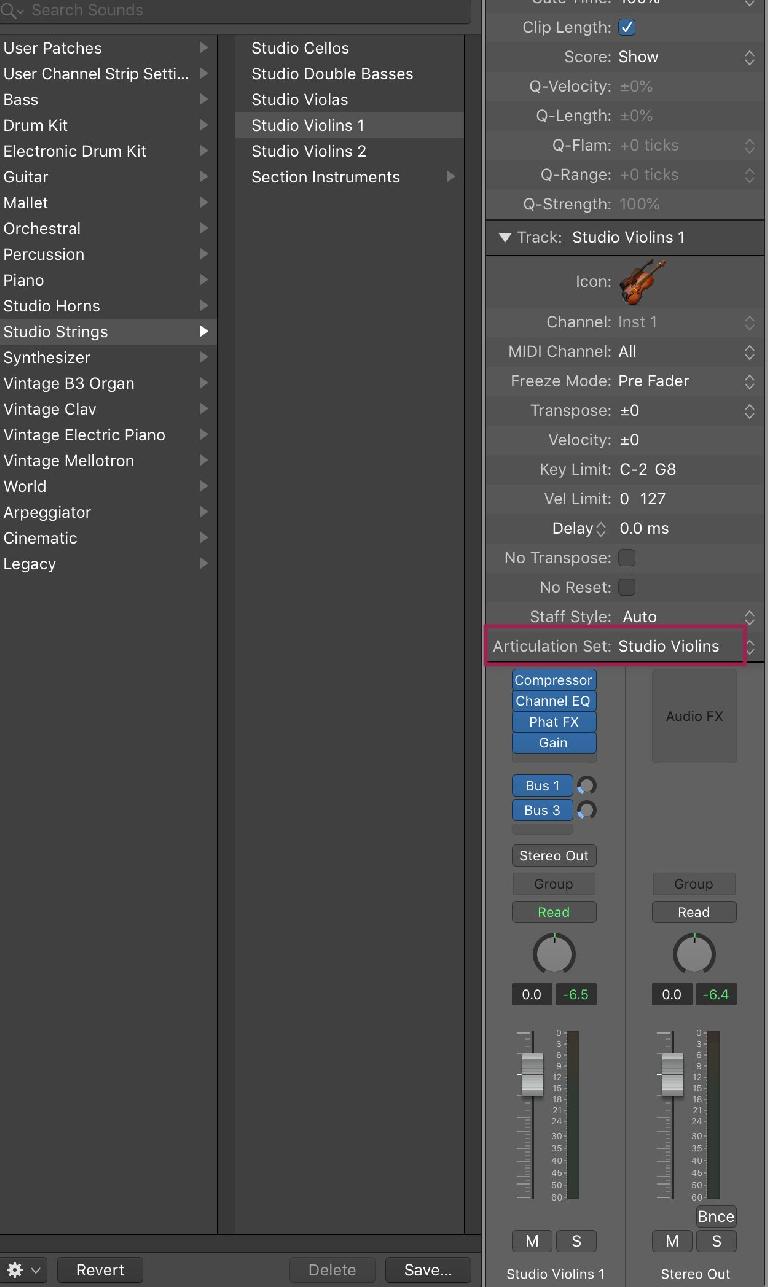 If I play in a simple part including ascending keyswitch notes, starting at C0, I hear and see the following:

Not only does it sound right, it looks mostly right, even with articulation symbols. Best of all, no matter where I start playback, I hear the correct articulation, even if stopped and clicking on the note. And in the Event List I can see them if I enable it in View, and change them there. Fantastic! 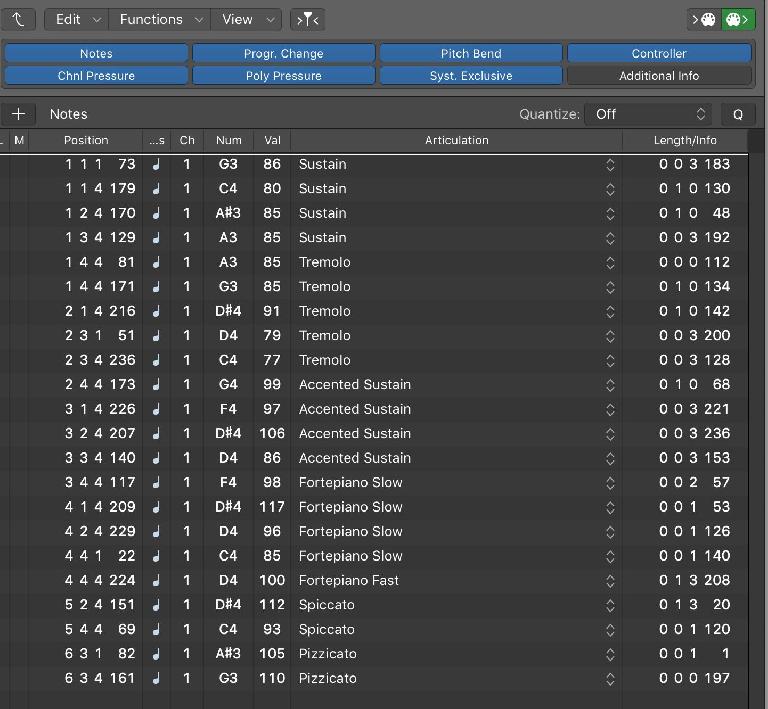 So how did they accomplish this? If I hold down on the Articulation set and choose Edit, it opens up in the Articulations window. Here we see that they entered all the articulations that the instrument contains and even assigned symbols to some of them. 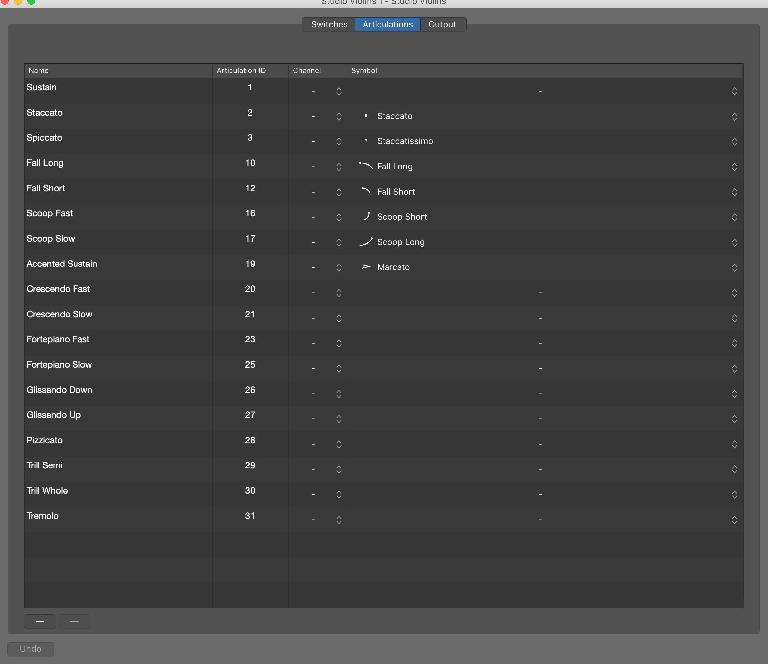 But of course, there is more to it than that. Take a look at the Switches window, where you see the assigned notes, and how some notes are Permanent, meaning the remain on the articulation until you hit another, while others like scoops are momentary, only doing that as long as you hold the trigger note. 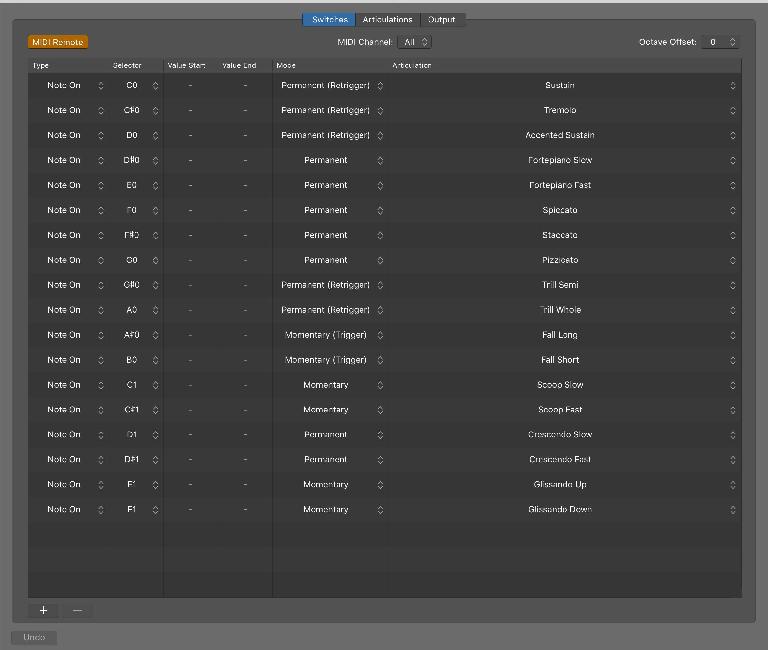 Finally there is an Output window, but the way they designed the instrument, apparently, nothing was needed here for this. 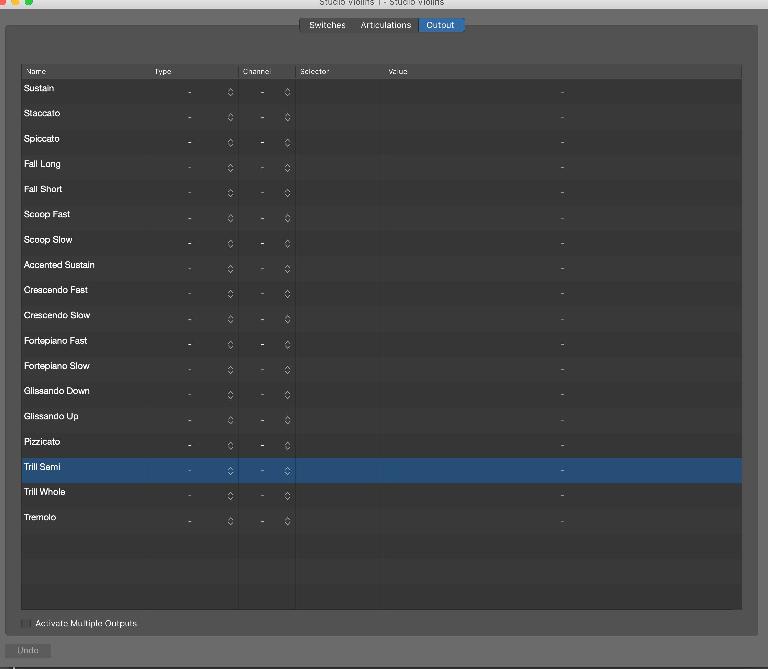 So now let’s see how I applied apply that to the third party clarinet. 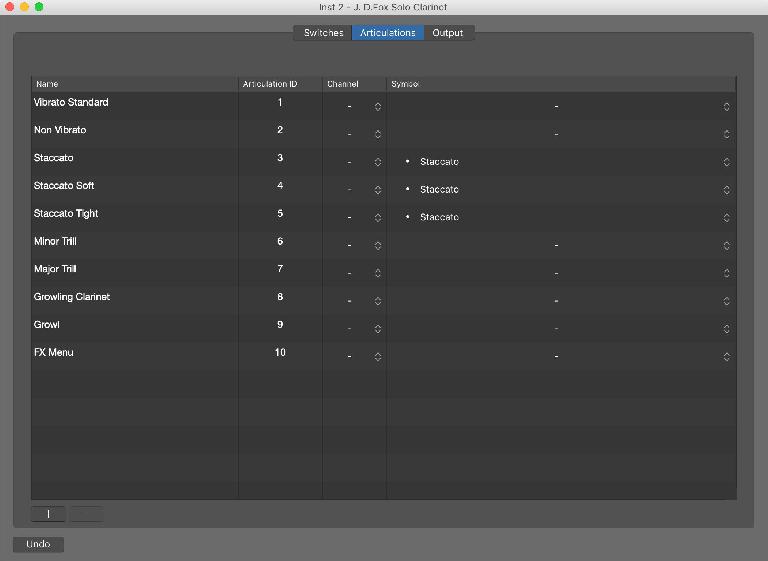 I repeatedly clicked the + sign to create the required number of Articulation IDs and named them to correspond with those in the Fluffy Audio clarinet. 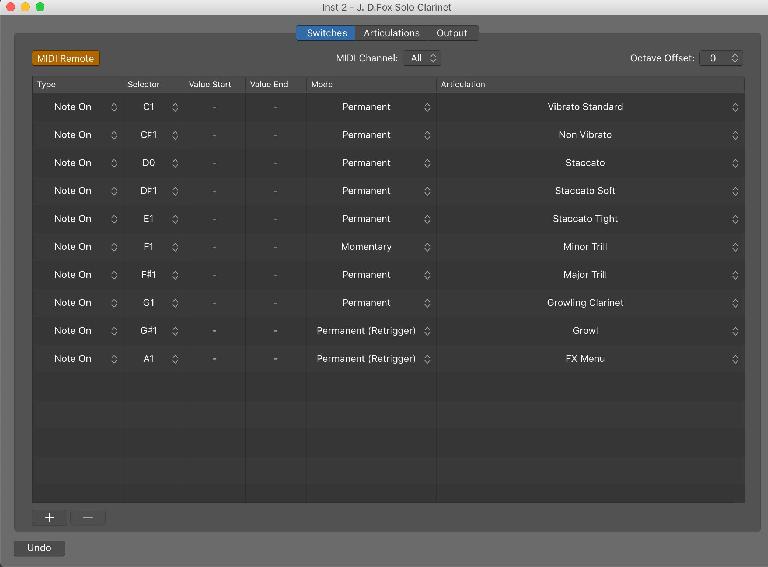 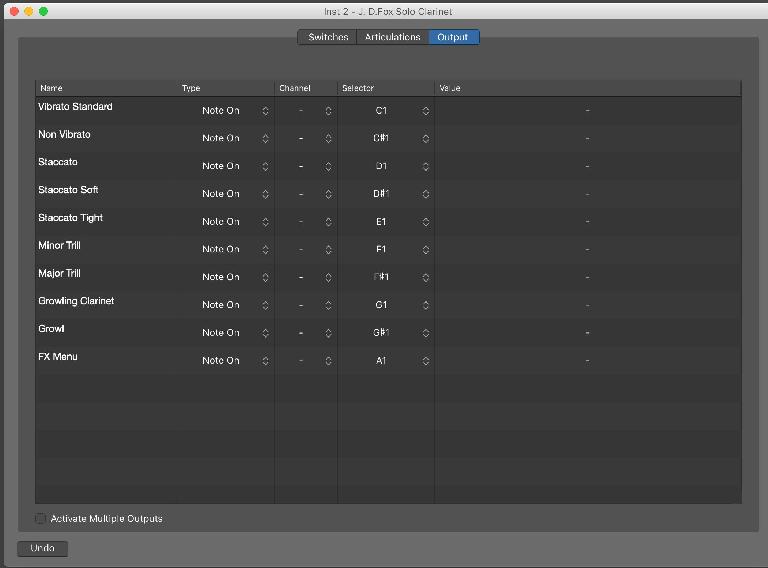 There are still some issues with some instruments. In this one, because of the way Fluffy Audio implemented them, it breaks the trills, but I was not fond of the way it performed them anyway, so I can live with it. So I hold down in the Articulation Set slot in the Inspector and “Save As.” I can even save it as a patch in the Library.

Also, we now have a problem solver for this. If you buy e.g. an EastWest Hollywood Series instrument library, their Play engine does not allow you to create keyswitch instruments yourself and some of them only have a handful that may not suit you

I have loaded an instance of Play with some articulations assigned to MIDI channels for the Hollywood Brass solo trumpet, another of my favorites. In the past, I would have created it as a multi-timbral instrument with the required number of MIDI channels, and packed them into a Folder Stack, and I still could, But Articulation Sets offers us a more elegant solution. 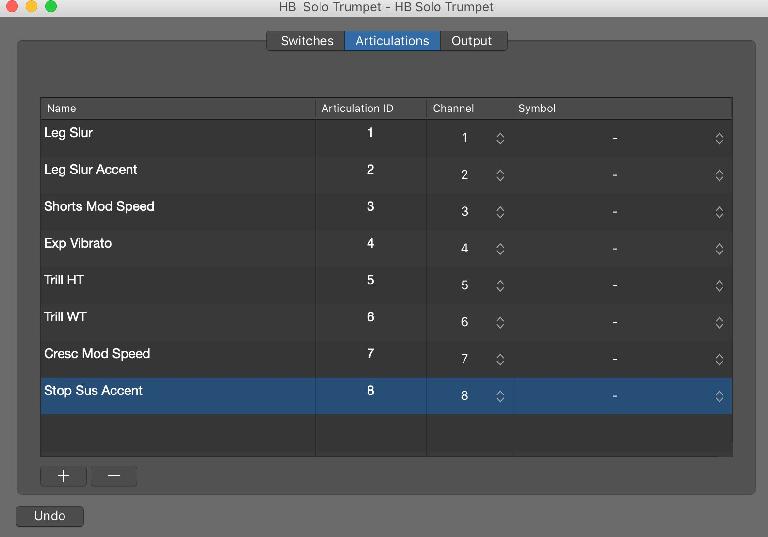 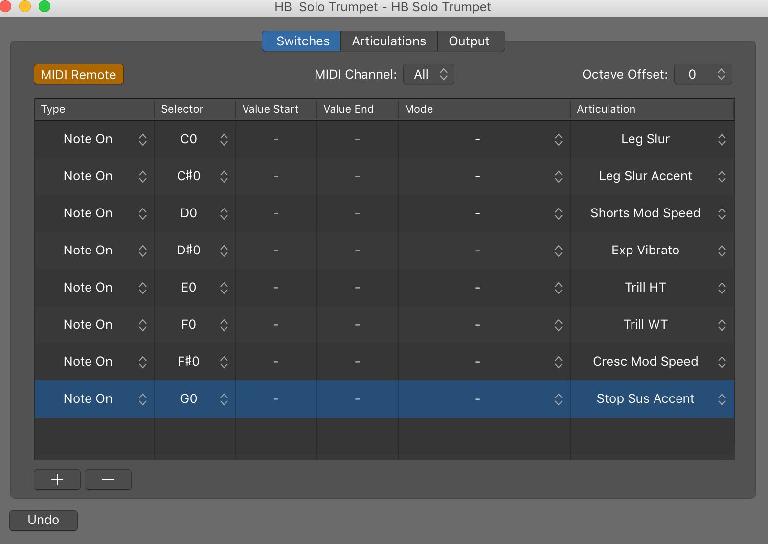 With the Switches window with this instrument, no mode was required as they all behave the same way. 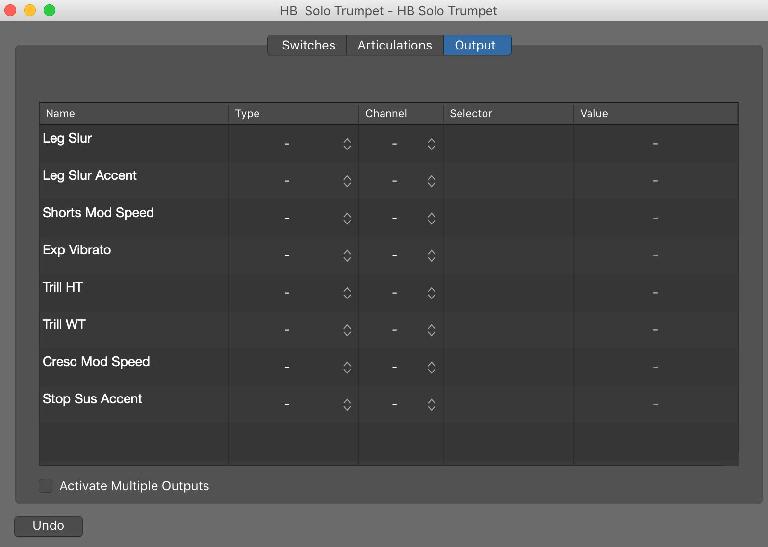 And again in the Output window, like the Logic instruments, nothing was required. And it works perfectly! Essentially, we have created our own keyswitch instrument in a library that doesn’t let you create them. How cool is that?

The Channelizing Issue And Solution

But there is one remaining issue to discuss. Because Logic automatically assigns MIDI Continuous Controllers, like Modulation CC1 and Expression CC11 to MIDI channel 1, it will not follow your MIDI automating across channels without a Scripter script, which until very recently you had to buy a third party solution for. Fortunately until Apple addresses this, one enterprising and generous fellow has provided one for free. Learn about how to use it and download it by looking here.

These are early days for the use of Articulation IDs in Articulation ID Sets, but with AU3 coming in the future to allow us multiple MIDI ports, they will become increasingly more valuable and I expect Apple to carry them much farther in the future. But why wait? Get your feet wet now. You will find that you can get very quick at creating these in a short time, once you have done a few of them.