Language
Cubase gives you 2 MIDI arpeggiator processors, the Arpache 5 and Arpache SX. Each has its own benefits. Let's take a look at how to use these MIDI effects and explore the differences between them.

Arpache 5 is the most basic of the two arp effects. Arps work best on long sustained notes. I have a MIDI region I’m gonna work with that is a 4-chord sustained pattern. To add the Arpache 5, you need to go over to the Inspector and look for the MIDI Inserts tab. Click on one of these slots and add the Arpache 5.

First up, is the Play Order. This gives you different direction for the Arp sequence. This is as follows: Normal (Up then Down), DownUpDown, Up Only, Down Only, Random and then User defined. With the user mode, this will be defined by the graph at the bottom. 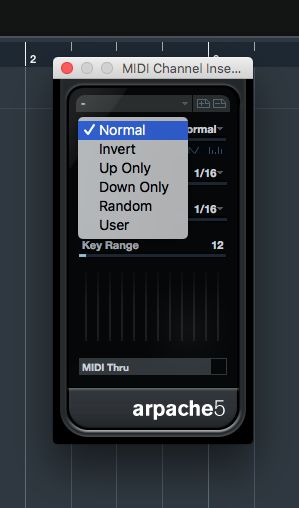 Next up is the Step Size, which determines the interval between the notes. So you can set anything from 1 bar all the way up to 1/32 notes, and this includes triplet and dotted patterns. 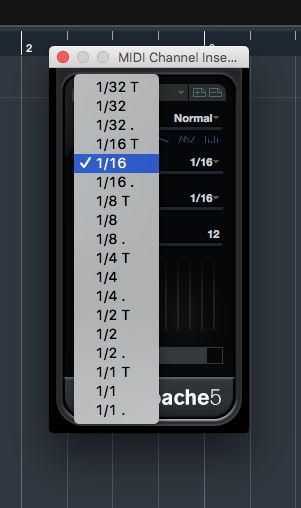 And then finally with the key range you can choose how many notes you want the pattern to jump through. By default this is 12 steps, but you can go from 1 step which will just be one note repeating through to 24 steps so the arp will be going through 2 octaves. I really like the user-defined pattern. Here you can set the interval jump for each step. So for the Play Order choose User. Then on the bottom graph you can drag on each step to choose the interval jump. This goes up to 8, so you can go up an octave. A nice way to get a unique sounding arp pattern. You can also jump for some of the presets from the presets menu at the top. There are some cool options here like Seq 4 finger and Simple-up-down. A lot of these presets have been created using the user-defined arp pattern. For example, you could create your own user-defined pattern and then save this out as a preset to use in future projects. 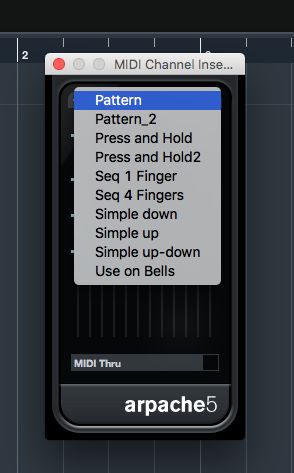 Now let’s take a look at the bigger brother the Arpache SX, which has more advanced features. 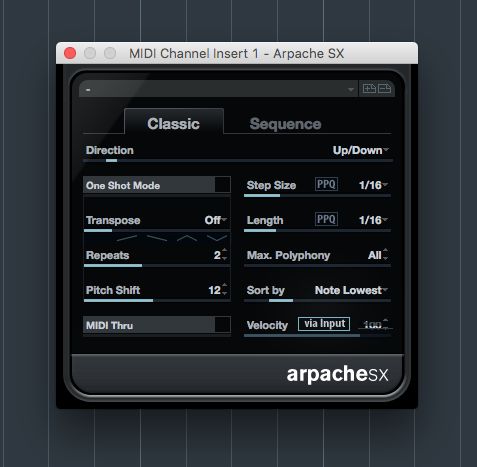 For example, if you take a look at the pattern modes, which is called Direction in Arpache SX you’ll see there are way more presets. So instead of up and then up down, It has up, mostly up up/down, mostly down. And then goes into some triller presets and even picking presets patterns, which works really well with sampled string instruments such as violins or even guitars. You can simply hold down a chord and it will create a picking pattern around this chord. 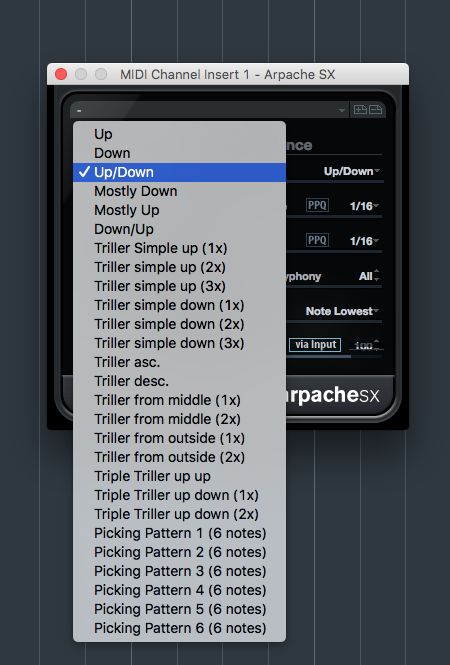 What’s also different is that on the step size and Length instead of being able to choose the size in interval values you can also choose PPQ, which stands for Pulses Per Quarter Note, which is the same timing that Cubase uses for its tempo base and timing. So choose which value works for you. 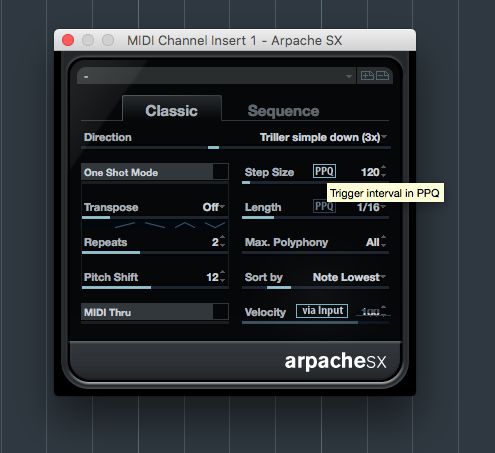 Also what’s great about the Arpache SX is that at the bottom right you can either choose for the part to take in the input from the velocity, so if you have different velocities on your chord programmed in it will take these into account. Or you can choose a fixed velocity. And this works quite well if you're used to how the old classic sequencers worked where they didn’t have a velocity option. Both have their own benefits. So choose which one works for the sound you’re applying it to.

So what we’ve dealt with are the parameters under the Classic tab, but there’s also a Sequence tab. And what’s great over here is that in the Sequence tab you can actually import MIDI files into it to create your arp or sequence patterns.

So maybe you have a synth MIDI part and you’ll like your bass sequence to follow this. You can just grab the MIDI part in your arrangement and drop it onto the UI where is says ‘Drop MIDI sequence’. I found that you had to right-click on the Arpache SX and choose ‘Always On Top’ so that the plugin stayed pinned on top, even if you clicked off it. Then I could drag the MIDI file onto it. 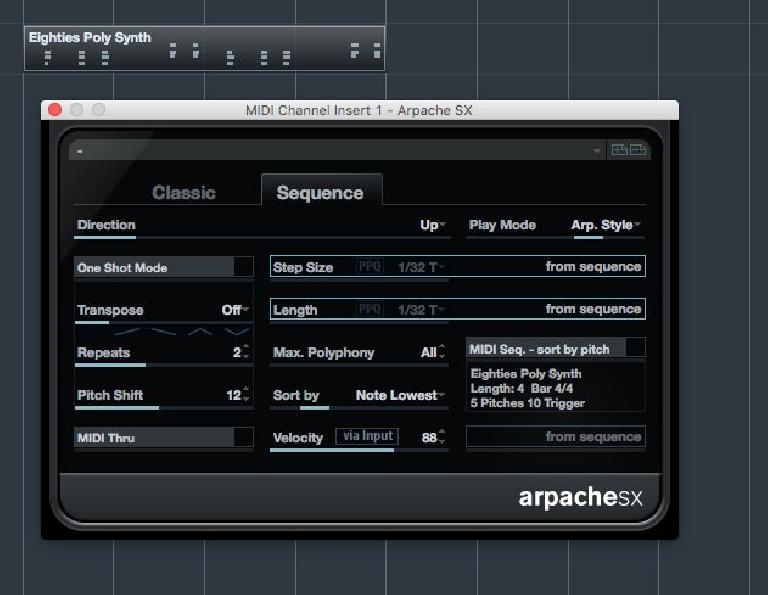 This will analyze the MIDI part and then let you know the length of it, and the number of bars and beats in the pattern. Which is pretty handy to know. Maybe your part has a 4-beat pattern, so when you're programming in your chords for the part you know how long it will play out the sequence over those chords.

Also the beauty of this feature is that it can add some continuity to your performance. Let's say you have a specific rhythm with your Bass part. You can take that drag it into Arpache SX and then your arp pattern will sync up with how the bass part is playing, giving you a really tight performance between your instruments.

That’s how to use Cubase’s arp MIDI effects. Each MIDI arp effect has their own benefits. Maybe you want the simplicity of Arpache 5, or you want to jump for the more advanced features with Arpache SX, both are very capable arpeggiators and can really add to your MIDI performances, and productions.