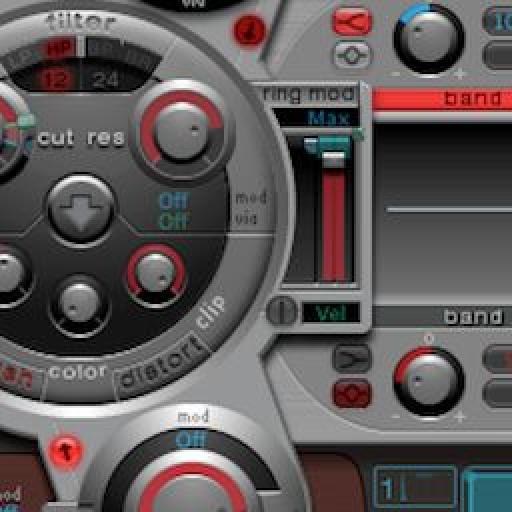 In this two part tutorial, I'll be showing you how to create an Electro House groove (drums and bass). This first part will be focussing on the drums only, and the next one will be on the bass line. Here's a sample of what we'll be creating after part 1 and 2 are completed:

So what is Electro House? In my opinion the genre has changed dramatically over the last few years. It went from being a hybrid of 80s inspired elements mixed with house, to being heavily influenced by distorted Dubstep type sounds. Today, it represents a harder/heavier type of house music. Even if you have no interest in making Electro House, follow along anyway... You might learn a technique or two you can apply to your genre of choice.

Let's dive right in and start to work out the drums for this piece. Open a new Logic project, create a new software instrument track, and pick an Ultrabeat. Choose the Trance Kit 02 preset. This Hard Kick (at the very bottom) sound will be the body of our kick. I actually think this kick is one of Ultrabeat's only solid dance kicks. It has an excellent bass vibration, that very few other kicks in Ultrabeat have (without major EQ surgery). Change the tempo to 128 BPM. A lot of Electro House kicks have an acoustic vibe to them. We'll want to add an acoustic kick on top of the Hard Kick sound, but filter out the lows so it only adds highs to the combination. Click the import button at the top of Ultrabeat. 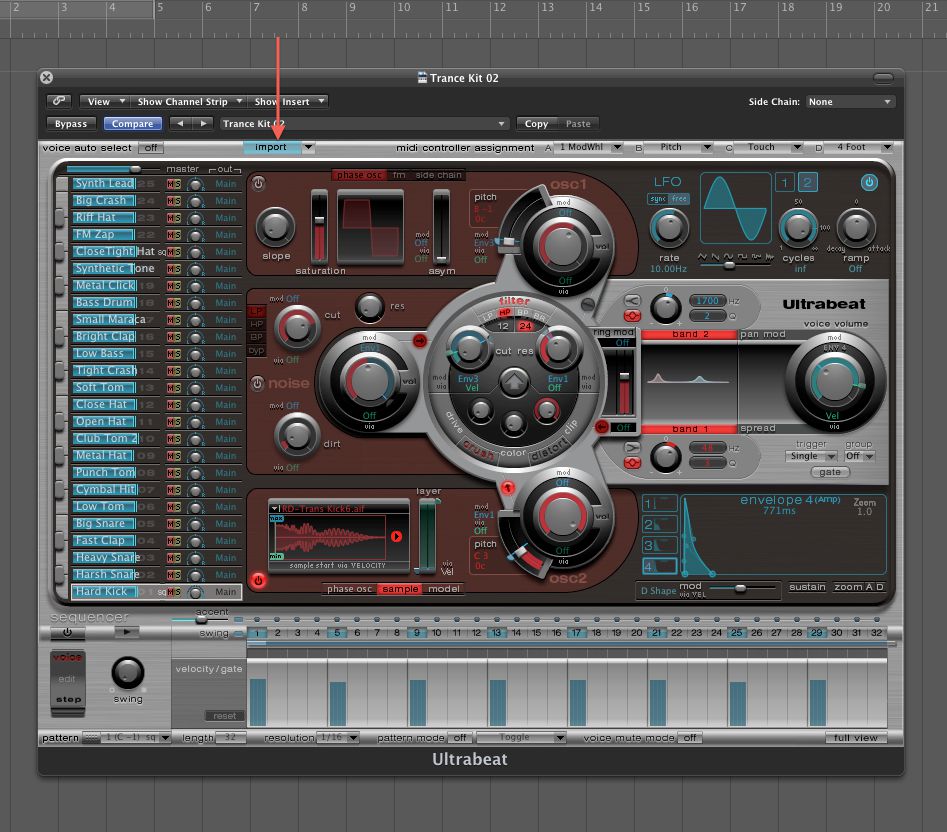 Go into the Drum Kits category, click Broken Beat Kit 01, then on the Open button. If you're not familiar with doing this, it allows you to import individual drum sounds into any of the visible slots. Grab the “High Kick” sound, and literally drag it to the spot above the Hard Kick labeled “Harsh Snare.” It will replace the sound with the one you've just dragged. 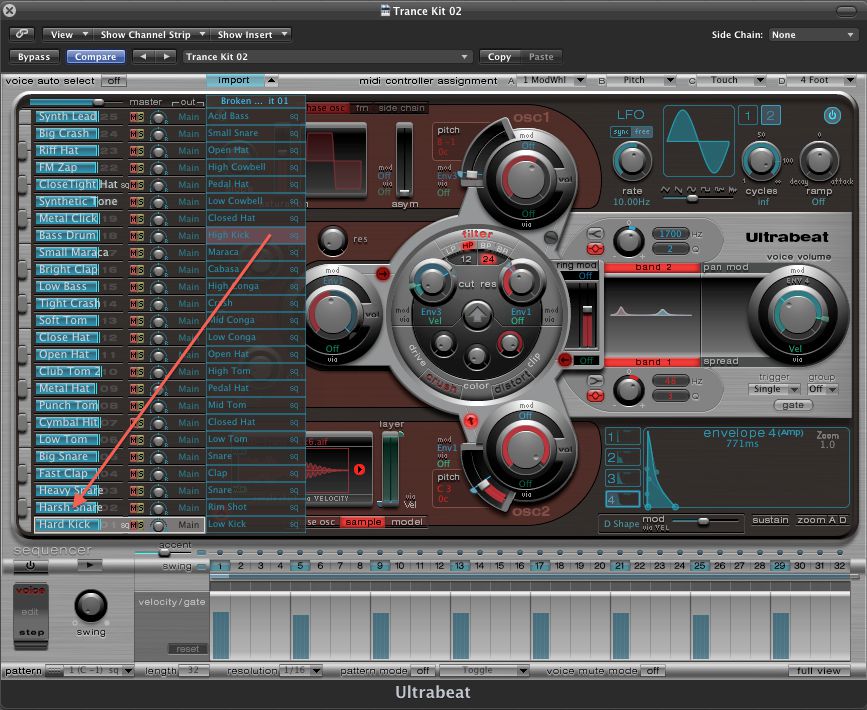 Now, I'm only looking for the higher frequencies on this kick, so I'll go directly to its EQ band 1 and change it from a peak filter to a shelf. Then I'll pull the amount knob all the way down, and raise the frequency to around 300Hz. This will cut all the low frequencies from 300Hz and below. 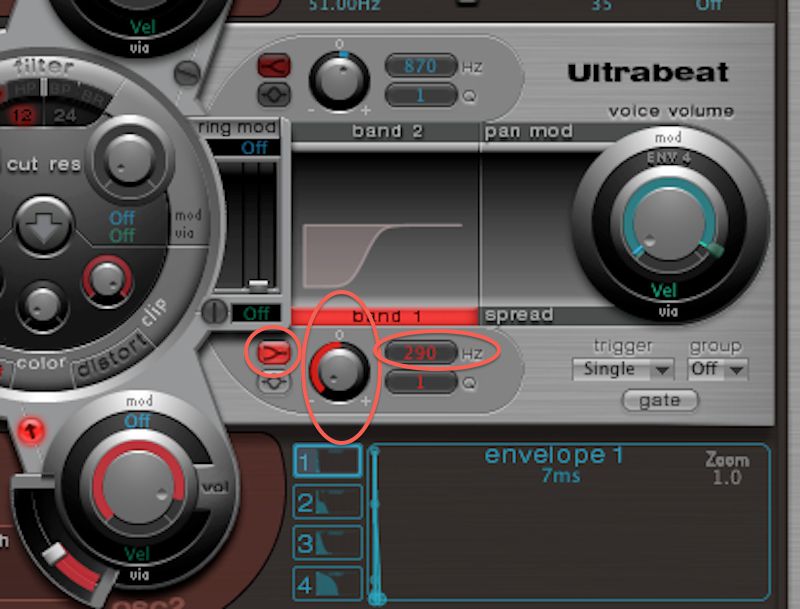 Go into Ultrabeat's step sequencer by clicking the Full View button on the bottom right corner of Ultrabeat. Erase the existing pattern by Control/Right-Clicking on the pattern selection drop down and choose “Clear.” Now on both the Hard Kick and the High Kick's step sequencer lane, Control/Right-Click and choose “Add Every Downbeat.” 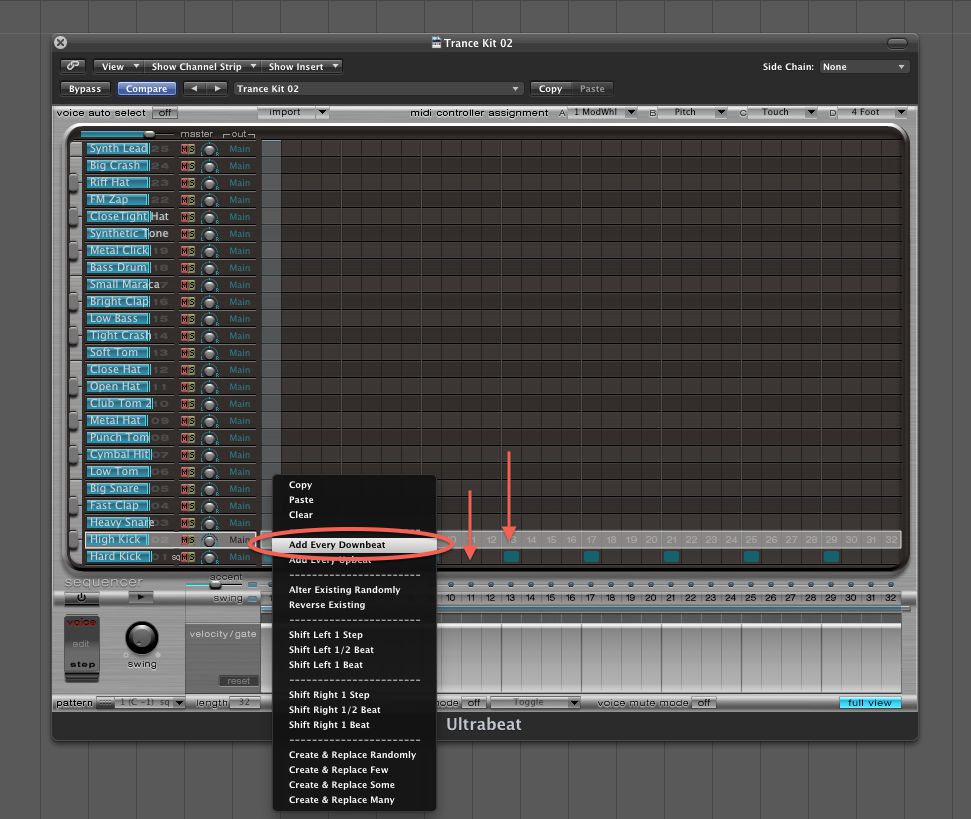 Now drag the pattern to the arrange window via the button directly to the right of the word “pattern,” then close Ultrabeat's window. Now press the “L” key to loop the region. Now, let's process these kicks to make them sound bigger. First, set the volume on the Ultrabeat track to around  -5 dB. Now add a channel EQ to the top insert. Enable the far left High Pass/Low Cut filter and set its frequency to 45.5Hz, leave its gain set to 24dB, and the Q to 1.30. This accomplishes two things: it cuts any deep low mud below 45Hz, and it boosts the ever excellent dance kick frequency of 50Hz. 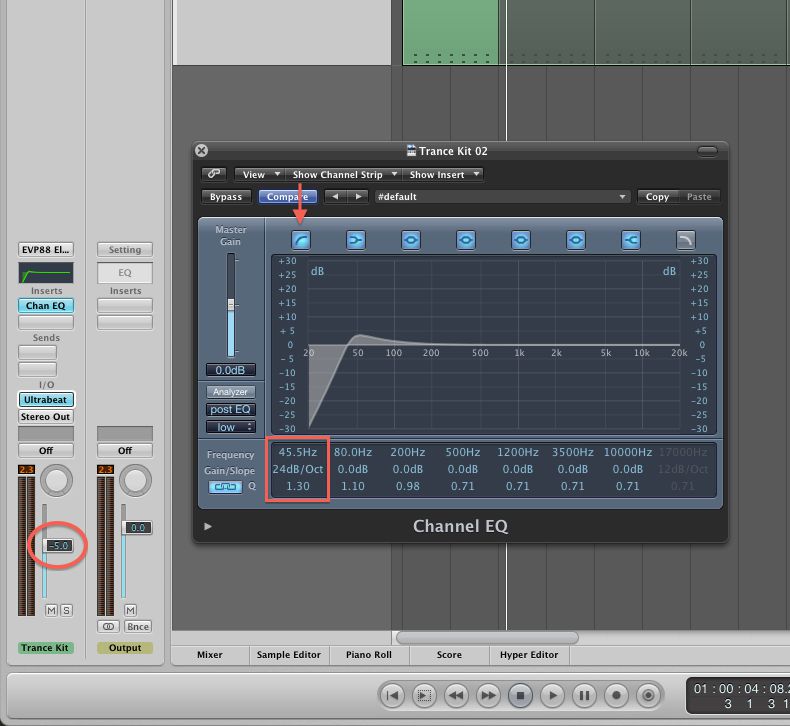 That EQ definitely adds a bit more thickness, but we need more... click on Send 1, and select Bus 1 from the list. Set the send's level knob to around -11. The bus will appear next to Ultrabeat's channel automatically. Place an Overdrive effect on the bus, and set the drive to 5.00dB, and the tone to around 50Hz. Leave the Output at 0dB. This in effect, leaves the original kick sound perfectly intact, while adding a lower level overdriven tone underneath it for added warmth and fatness. 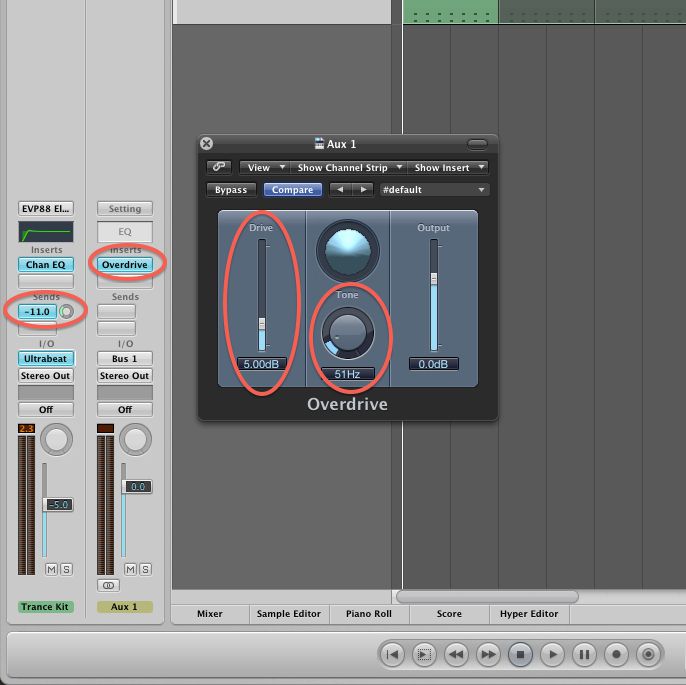 Step 6 - Snare: Get the Snare Sound

Now onto the snare. There's never absolutes in dance music, but it is common for Electro House snares to be bigger and punchier than other genres. Create a new software instrument track and choose the EXS24. From the black area directly above the Cutoff, click, and from the Factory > Drums & Percussion > Electronic Drum Kits menus, select “Electroclash Remix.” Close the EXS24 window. 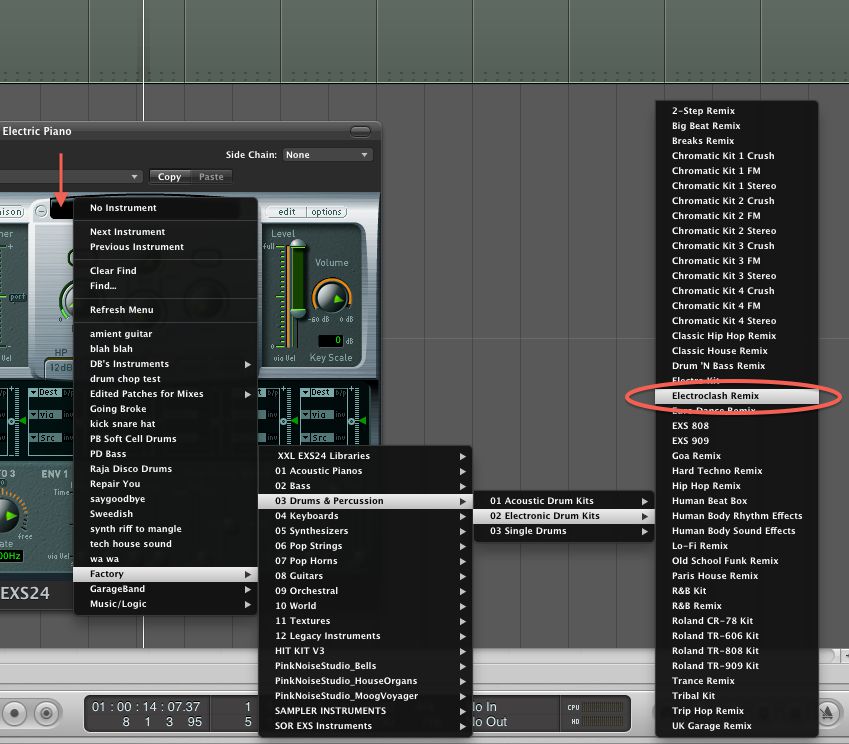 Now draw in a new empty region into the arrange window on the EXS24's channel. You can do this with the pencil tool, or Control/Right-Click and select “Create Empty MIDI Region.” 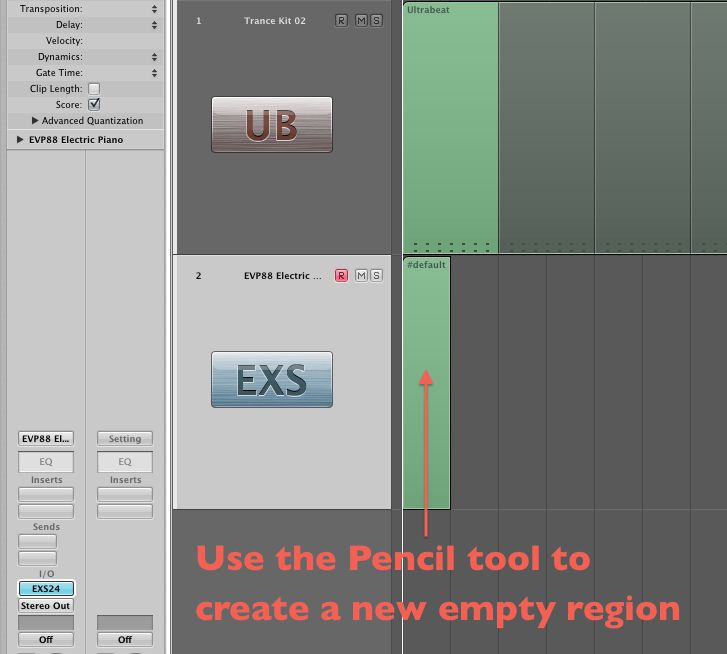 Double-click the newly created region, and draw in the snare on the 2 and 4 beats on note E1. Duplicate the region a few times and at the end region create some fills if you want to. For the demo piece above, I simply added a fill to the last bar of every 4-bar section. Obviously when you start to arrange your track, you'll add fills wherever necessary. 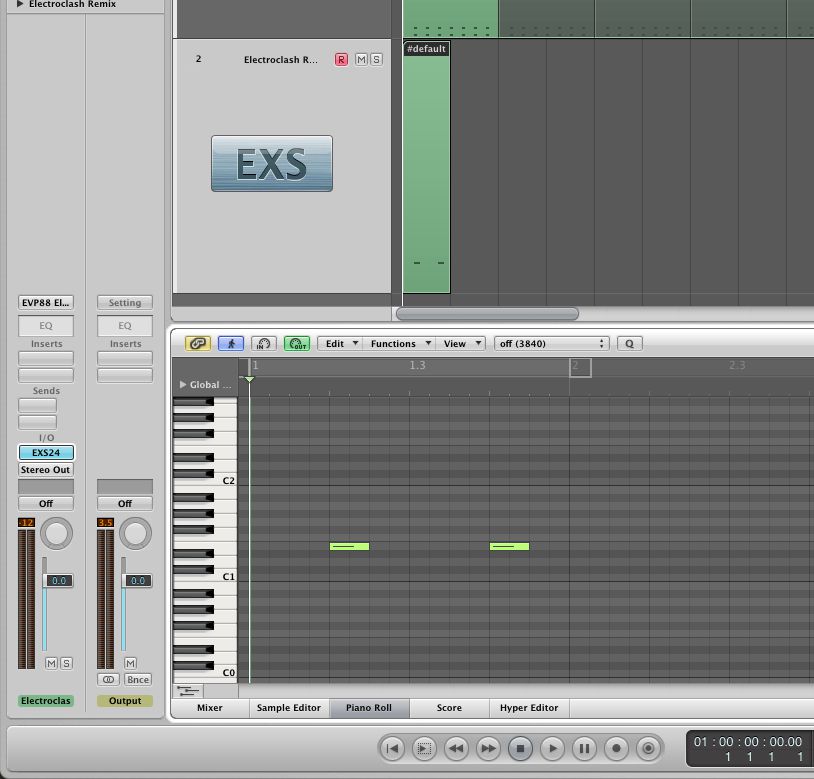 Now let's process the snare to make it better sounding! First, set its volume level to around -5  db. Add a Channel EQ to the top insert and again (like we did for the kick), enable the High Pass/Low Cut filter. Raise its frequency to around 450 to 500 Hz. This will push out the lows from the kick, so only the mids and highs are left. 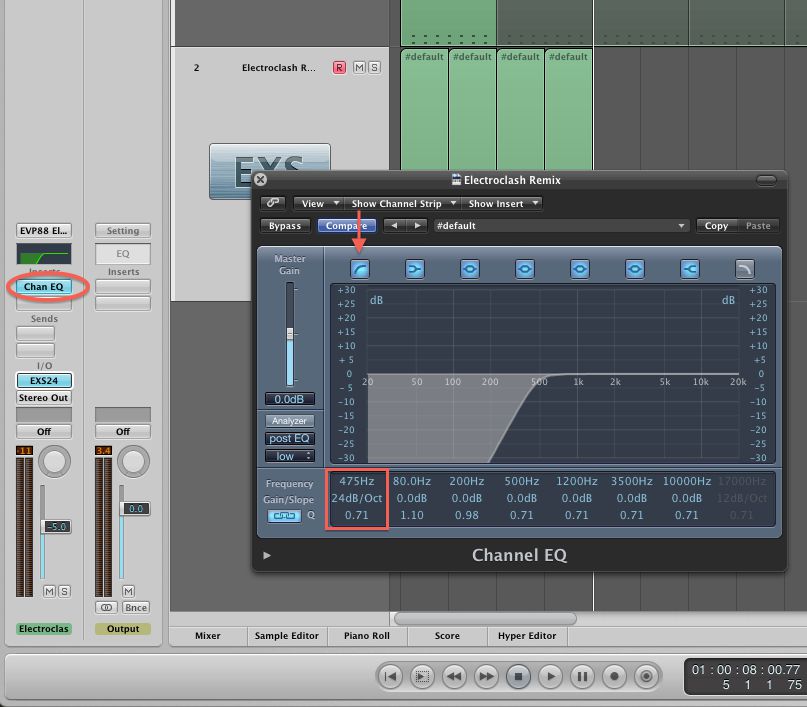 Below the Channel EQ, add a Space Designer Reverb. From its presets menu under Medium Spaces > Gated reverbs, select “Gated Chamber.” Keep all the existing settings, but pull back the Reverb Level to around a quarter of the way up. Next, I want to shape the snare with a compressor and boost the sound of the reverb along the way. Add the Logic Compressor below the Space Designer. Push the attack up to about half. Higher attacks on a compressor equal punchier sounds. This is because the original uncompressed sound has a moment to play though naturally before the compressor lowers the volume. Set the Threshold to around -36dB.

Then turn on the built in Limiter and raise the gain to around 14dB. The limiter will allow you to raise the gain (all the way up if you want to) without ever having to worry about clipping. To put it a different way, you get a more in your face sound. Clear the pattern and enter the Step Sequencer with the same method we used for the kick sound above. Create a pattern like the one in the image below on the Open Hat sound/lane (third from the top). Turn Ultrabeat's sequencer on (bottom left corner) and press its play button. The sound cuts off instead of playing all the way out. Leave Full View by clicking its button again, and click the Open Hat's Gate button to turn it off (Make sure the Open Hat is selected). Press play on Ultrabeat's sequencer again... now the sound plays out all the way. Make sure Ultrabeat's built-in sequencer is turned off, then drag the pattern to the arrange window like we did with the kick. Close Ultrabeat's window, then press the L button so the pattern loops. Set its track volume to -2dB. Copy the effects from the snare channel. Open the mixer if it's not already by hitting X on the keyboard. Locate the snare channel, and hold Option-Command while you drag the snare's Channel EQ, and Space Designer to the Hat track. So there ya go! If you followed along, you should have a basic Electro House drum part that should sound like this:

Keep an eye out for part two where we'll add the nasty sounding bass! Till then, hope you enjoyed this first part of the article.

AKA Adam
This article was awesome super easy to follow and re create the sounds. It's especially useful to have a recording in the article so you can make sure you're doing it right. I did notice between step 9 and 12 you switched from drum and bass kit 1 to drum and bass kit 2. Thanks!