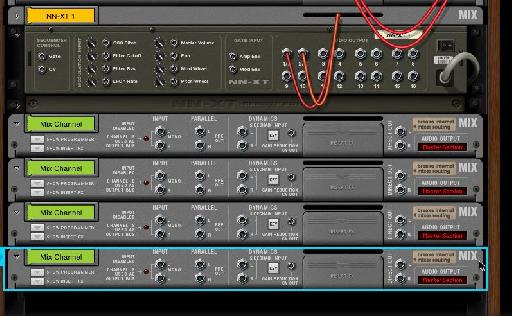 Language
Why would you want multiple outputs from a sampler? What good are these in Reason's NN-XT? G.W. Childs shows creative and CPU-saving reasons for using multi-outs in Propellerhead's NN-XT sampler.

At some point in your Reason career, you may find yourself behind the NN-XT, somewhere in the ether, with your virtual rack, and suddenly find yourself wondering about the additional outputs on the back. At first, one might venture to guess that the Propellerheads were merely sticking with what should be on the back of a sampler, but there is valid reason, beyond mere nostalgia, if you’re ever performing live a lot, or you just prefer a more old-school approach to doing things, and enjoy the Reason samplers, read on. The reason for and usage of multiple outputs might assist in adding some fun and CPU friendly power to your performances.

Why are there Multiple Outputs on a Virtual Sampler?

The full explanation is myriad. But, the main reason is to be able to send certain samples, within an existing patch, through a different signal path. While this may seem almost quaint, in terms of abilities, it’s quite cool. By being able to send certain samples within your patch to different outputs routed to sub-mixes laden with cool effects, and surgical EQs, panned intelligently, one can dazzle the audience with one, tiny sample patch.

Now, imagine if you could set up a keyboard full of samples mapped similarly? You’d be able to jam out, pressing random keys, either choreographed, or in the moment, jamming. All the while, sounds are flying all over the room. And, if you’ve got a surround system? Yeah, nice! 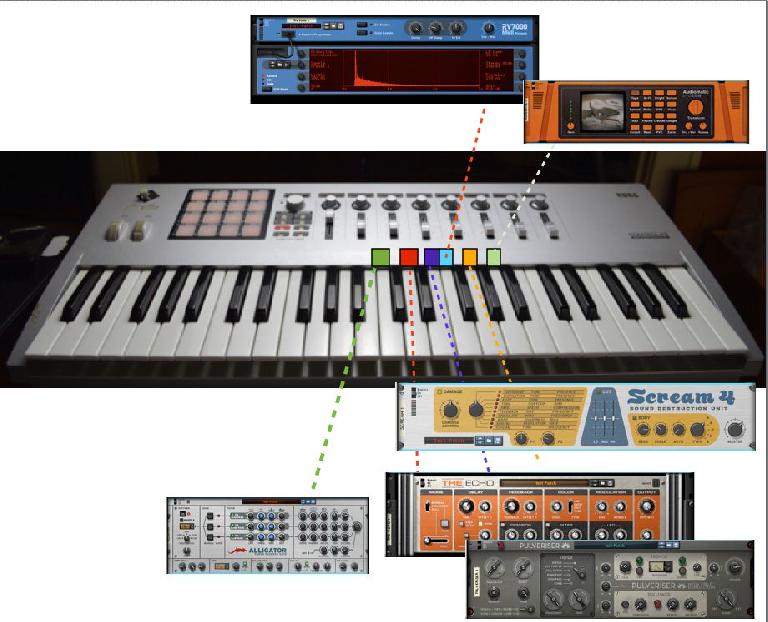 And, there’s one more perk—Samplers only playback recordings. They aren’t virtual synthesizers that can push your CPU. Thus, having several instruments, sounds, effects, explosions, etc. can be spread across different keys, velocities, aftertouch, and so much more, and you won’t see a CPU spike every time you press a key.

In an empty session of Reason, I’m going to create an NN-XT, initialized, and empty of all samples.

For demonstration purposes, I’ll use the sample button to record a verbal sample of myself, saying “Hey!”.

Now, I’ll go ahead and map this newly added sample directly to C3, similarly to the way I did in the example, above. I’ll do this through the NN-XT’s interface. I’ll simply select the sample, labeled as Sample 1, the default labeling for newly recorded samples, done internally, within Reason... 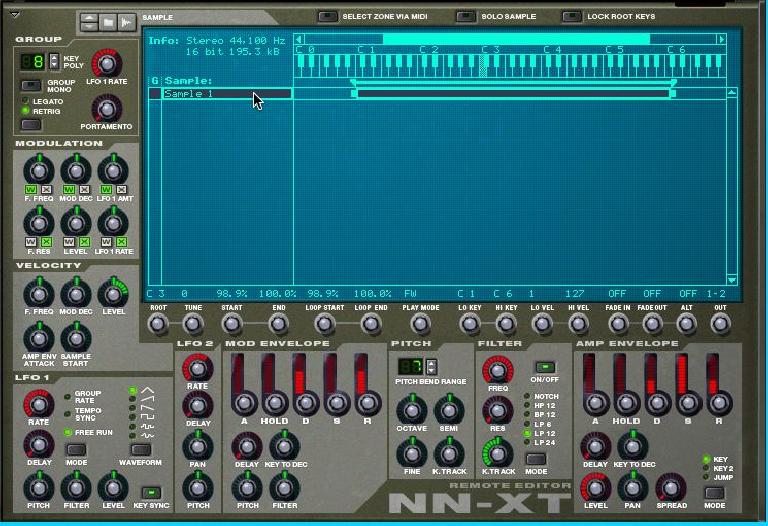 And then, I’ll use the handlebars that appear, upon selection, to scale the mapping territory of this sample down to one key. 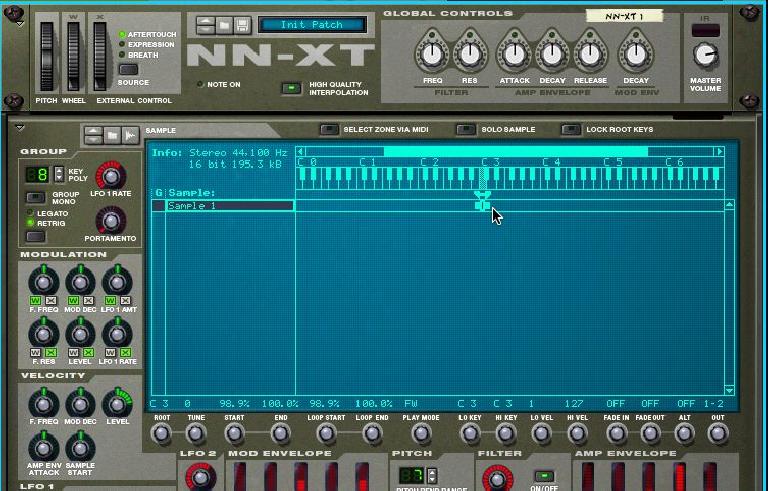 Alright, with the key mapped to my liking, I’d like to point out the Output that this sample is currently running through, and that’s the actual channel that we hear the ‘Hey!’ on, when we hit C3, down in the lower, right hand corner of the NN-XT’s main interface, indicated as Output 1-2. 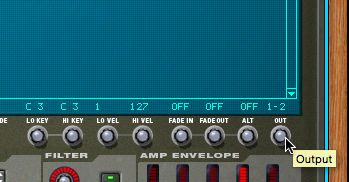 And, if I press the Tab button, you’ll see that the NN-XT is indeed connected only to this particular output.

Since we’re back here, let’s go ahead and set up some additional outputs. I’ll right-click on the NN-XT, and select Mix Channel.

Then, I’ll click on the Mix Channel, to select it, and use the Command-D shortcut, 4 times to create a few additional channels that I can send from my NN-XT, direct to the Reason, main console. 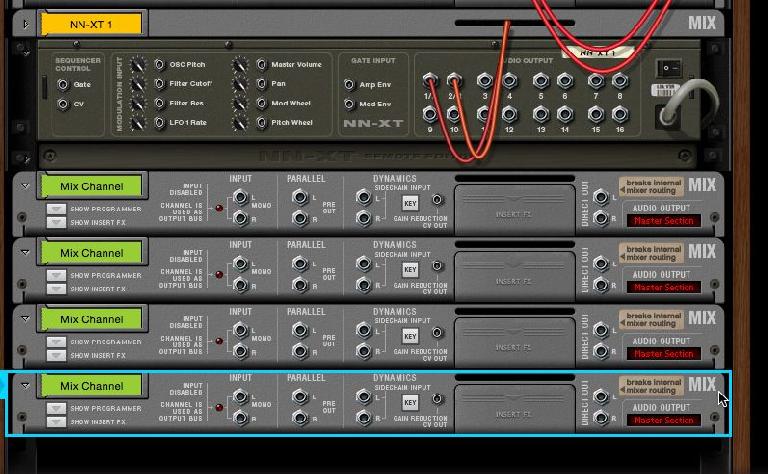 I’ll also route the outputs, mono, to each of the individual mix channels. By keeping them all mono, I can ensure that each key will truly get its own mixer channel, which in turn, can have their own effects, EQs, and so on. Notice: I’ve changed the labelings so that the mappings reflect the channels, just to keep things tidy and easy to understand. Let’s have some fun populating the keys that we’ve made channels for on the board, now. I’ll right-click in the center of the NN-XT programmer and select Browse Sample, which will bring up the directory in the browser that has projects specific for this session. Disregard this, by selecting the Factory Soundbank, to the left of the browser, and then double-click on the Other Samples Directory, within the Factory Soundbank.

This particular directory of samples, within Reason 8, is a cool little batch of random samples, great for DJ hits, stabs, and little bits of polish for spicing up a track. I’ll go into the Chords > Phrases > Pads > Stabs directory, and choose Detroit_eLAB.aif, by double-clicking on it, after de-selecting Sample 1. This causes the audio file to be loaded up as a sample, within the NN-XT, which I’ll map only to C#3, as I did with the first sample. 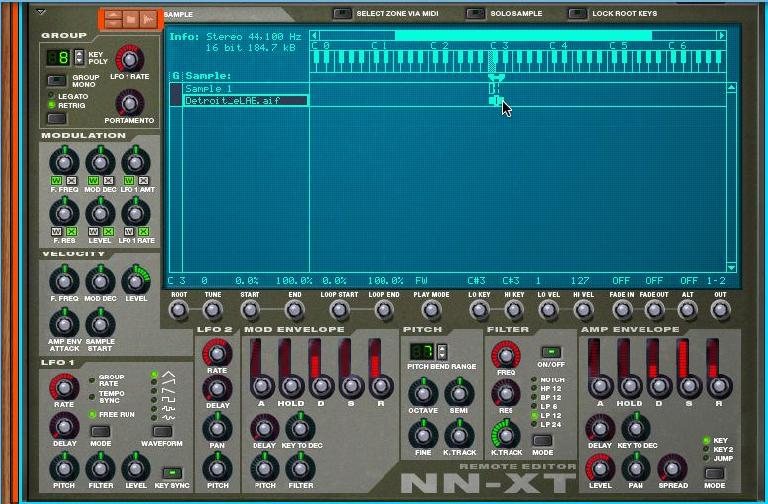 Though, because this sample is going to another key, as opposed to a default C3, root note, I’ll change this samples Root Note setting to C#3, as well. 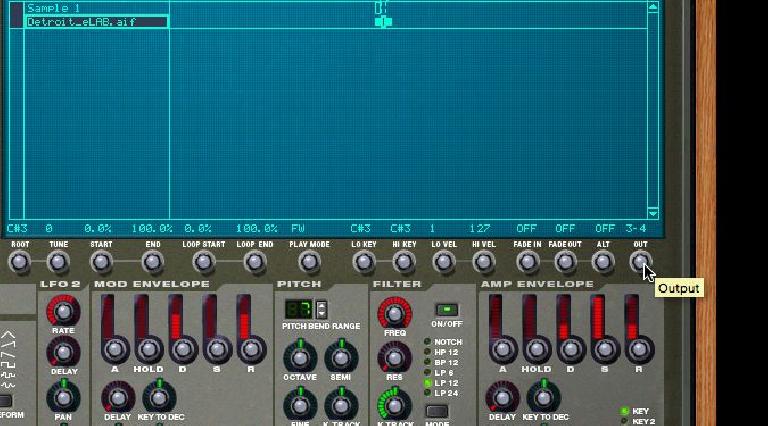 And, while the sample is still selected, I can also change its output to channels 3–4. It’s now playing on a secondary channel!

Note: Obviously, the first key, C3, is using 2 channels. Sure, I could have mapped output 2 to its own Mix channel. However, I tend to prefer leaving audio channels 1 and 2 available for stereo samples. Later, in this patch, I’ll probably populate a few more sample mappings behind C3, like drum loops, and so on, that need a full stereo out. 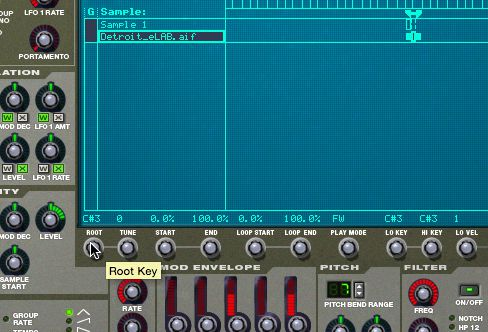 Though, I will need to make sure and pan this sample, intended to come out of channel 3, all the way to the left, so that the next channel will be going out of Output 4. This will keep these sampler channels discrete. 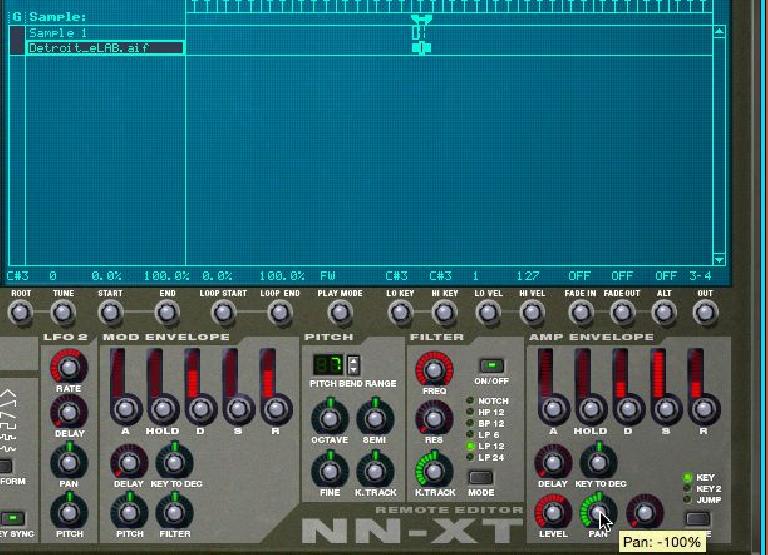 Now that I have a Mix track set up to take a secondary sample coming from the NN-XT’s channel 3, I can go ahead and drop in an effect. I’ll choose an RV-7000 MkII, and set it up with a Convolution Reverb, so that the orchestra hit (Detroit_eLAB) sounds a little more real.

And, because the Mix Channel functions so similarly to a Combinator, I can map several  parameters of the new RV-7000 MkII, and any other effects I stack in to the Detroit Hits, discrete channel, so that I can tweak one key on the fly with crazy effects. Then hit another key, and have things dry, and clear. You’ve got to love Reason!!! Now, go ahead set up some samples of your own, with the steps we used above, and map some more keys to some different audio channels. Fill out your personal, live, multi-out NN-XT patch... And, don’t forget to save!