One of my all time favorite styles of arp patterns would have to be the classic EBM/Industrial bass, bouncing and pulsing along with a thick kick drum. Of course, FL Studio provides many different synths that excel at this kind of endeavor. But, none so much as Poizone 2, a small, basic synth with a sound that you'd swear was an Access Virus. Poizone 2's only limitation, when it comes to its arp is that is has very basic arp patterns like, up, down and random. Not much, right? But, when you involve the LFO, and the Trance Gate along with your Arp action… well, things can get very rhythmic. Let's take a look in this tutorial for making some industrial, analog, EBM bass.

To begin with, let's go ahead and reset the Poizone instance you might be using. This will remove unneeded settings from presets that will only get in the way of what we're trying to accomplish. Go over to the Options drop-down menu and select Reset Program. 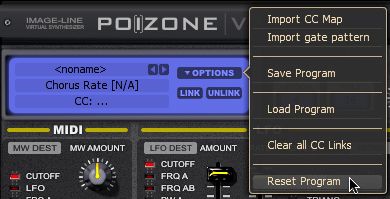 With everything zeroed, let's start working with our tone. Because we're doing an EBM style arp, we're going to want some detuning, for sure. I'll go ahead and set Poizone 2 to Mono, which will get rid of our unneeded polyphony, and instead use those voices for Unison Detuning. Granted, we will only be able to play one key at a time, for now. But, once the arp comes in, all that will change.

Okay, now for the unison. I'll bump up the number of Unison voices up to 4, as soon as this happens, you'll notice a huge difference in sound. Suddenly, it sounds thicker and bigger. And, to make things even bigger, I'll increase the Unison Detune to 23%. It's good not to go too crazy with detuned patches that are meant for mid-range, or low range octaves, like arps. The reason why is the detuning can get very muddy in the low end, causing your arp to lose a lot of definition. Finally, we'll lose some of the polyphony. We're not using it anyway. I'll set this down to 4.

Now that we have the first oscillator humming, let's add in another to fill things out and give us a little more depth. In order to do this, we'll need to adjust the Mix, or in Poizone 2 terms, balance. In the Balance section, I'll modify the OSC, or oscillator balance so that I can hear both Oscillators. To hear both, with equal levels, I'll set the OSC knob in the middle, at 50%.

Over at the second oscillator, or Oscillator B, I'll change the waveform to Pulse by, of course, pushing the Pulse button. And, just to add in some depth and contrast in to our bass-ish, arp fodder, I'll lower the Pitch to -12. And last, but not least, for Osc B, let's add just another small bit of phatness, by raising the Detune knob to +8.

In FL Studio, I'll go ahead and set up a loop, so that I can start tweaking the arp pattern that is definitely coming.

For the filter section, we're going to rely a lot on the assignable envelope, within Poizone 2. I'll drop the filter cutoff down to 0, and raise the resonance to 45%. Directly above, in the Envelope section, with the Envelope assigned to Cutoff, raise the Envelope Amount to 61%, this will open the filter, initially, very wide. With the Decay set to 1192 ms, and the Release at 85 ms, we now get that cool bass synth bounce. But, more importantly; we've started the first of several different sources of movement for our filter cutoff knob. Now, we just need some pattern. And, oh, Poizone is great for this. 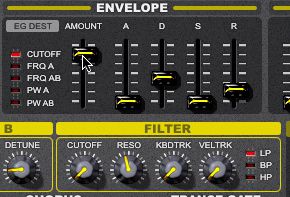 This is where Poizone shows off its stuff with cool modulation and rhythm. I'll set the LFO Amount to 51%. By increasing the LFO amount, I'm adding in a substantial amount of movement to the Cutoff of Poizone's Filter, which is already pretty modulated, considering the Envelope is also assigned to it. I'll also keep the LFO Shape working within a Sawtooth pattern. This will cause our lowered Filter Cutoff knob to open in a rhythmic pattern, starting small, and then getting wider. I'll set the TMP Sync so that the LFO modulates with a 3/16 resolution.

To have a really nice pattern, though, we're going to need more than just a simple LFO pattern. It would be nice to have a little intricacy, right? I'll use the Trance Gate to create a pattern of ducking (where the audio coming from Poizone rhythmically is lowered and raised in volume) to create an even more elaborate pattern for our arp bass. As you can see, I went pretty crazy with my pattern. I welcome you to use mine, or toy with it on your own. However, do not forget to raise the Wetness knob, which determines how much of the trance gate effect you perceive, all the way up to 79%. And, raise the Smooth knob up to 78%, which will take out some of the abruptness of the volume cuts coming from the Trance Gate, and literally add more of a smooth glide to our pattern. Oh, and make sure the TMP Sync for the Trance Gate is set to 1/16!

Now, let's give it a listen with some drums and the Unison Pan turned up to 70%… 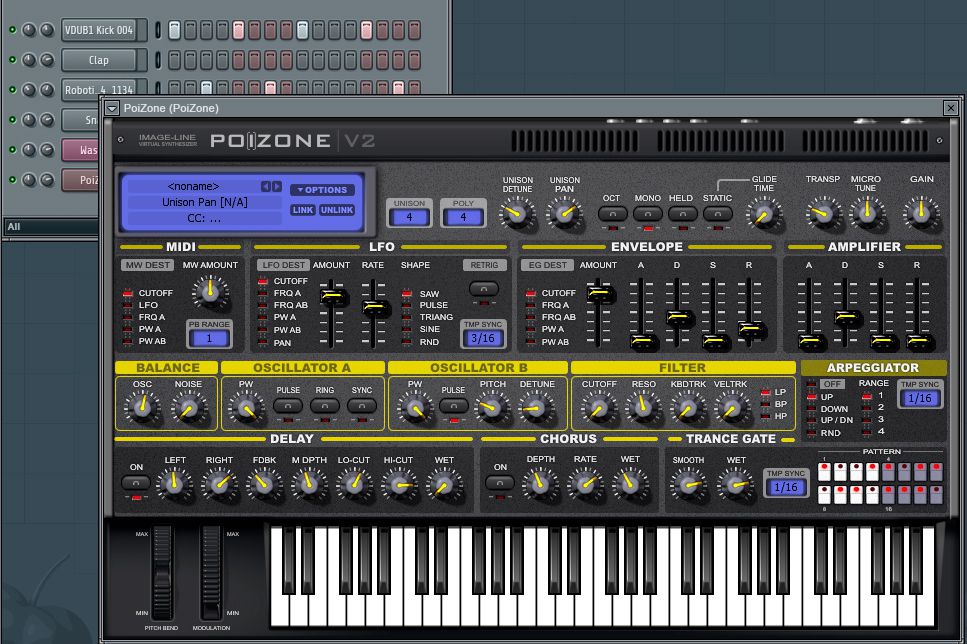 Not bad! A cool, grooving bassline that took no time whatsoever to set up. And, as you can see, it's an easy synth to work with. So, next time you're trying to get your fix for dark, electronic, bouncy, arps, within FL Studio, give Poizone 2 a shot. It's got a Virus's fatness and low CPU overhead. What's not to like?