Language
It's time for some old school synth tips. If you've got a desire to create some house music stabs and you're a Propellerhead Reason user, then this one's for you.

Back in the day, we didn't have unlimited sample memory, and we didn't have much in terms of polyphony. The hardware synths, which are now in vogue... again, were what we were limited to. To add complexity to extremely limited technology, we had to get smart. One such trick was using stabs for dance tracks. You could sample a musical stab (chord) from a recording of a symphony, or a piano, and then riff for a while. House Music, especially back in the day employed tons of stabs, along with early trance, and so on. In this tutorial, I'd like to show you how to make an old school synth stab.

Okay, so bring up an initialized Thor, and we'll begin! Because we're building from a synth and not a sampler, we're going to have to introduce some additional notes so that we can form the notes of our stab. To keep to the spirit of House, so to speak, I thought we could build from the Piano wavetable, within the Wavetable Oscillator. 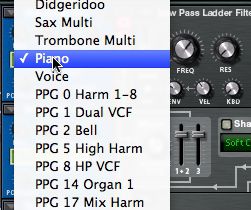 This will work perfect, as this particular Wavetable sounds much like it would if you were using an old Casio. In other words, it doesn't really sound that much like a piano. I'll set three of these oscillators up, and ensure that the all of the oscillators are being routed in to Filter 1. 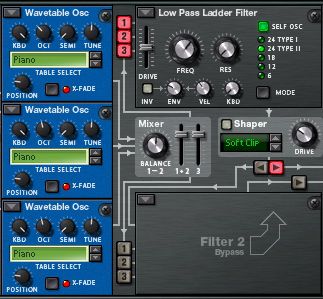 Next, we'll need to adjust the semi-tones of each oscillator so that we get a chord, when we hit a key, instead of a single note. To do this, we'll adjust Oscillator 2's Semi knob to 7, and Oscillator 3's Semi knob to 3. As soon as you press a key, you'll hear that we now have a stab, of sorts. And, while we could use it 'as is' there are some additional tweaks needed to give it the glide and ambience needed to offset synth bass and drums, and add that cool, club feel.

Tip: It's not essential. But, to give your stab a more interesting texture, try adjusting the Position knobs on Thor's Wavetable Oscillators.

Now that we have a basic stab, let's have it perform the way it's supposed to. First, let's adjust the polyphony. Remember what I said, we didn't use to have any. Let's get rid of what we've got here, too, to give our stab some legitimacy. Mono Retrig is a perfect setting, as early samplers didn't tend to have it, where early synths, did. And, while we're here, let's just adjust the actual Polyphony and Release Polyphony all the way down to 1.

In the Amp Envelope section of Thor, I'll lower the sustain down all the way. And, on the D, or Decay, I'll lower it down to 1.90 s. Finally, I'll raise the Release, or R to 2.61s. By keeping the decay low, and the release slightly higher, we are giving our stab a bell-ish pattern that fades out slightly, rather than cutting out abruptly. However, some people like it the other way, which is keeping the release down to 0. Go with your gut!

Filtering and effects are where we can actually pull back some of the old school feel, if you want, and create something new that can still be quite fun with modern dance tracks. If anything, we can have some fun. For our main filter, I'd like to employ the Comb Filter. The breezy, ethereal, phasing texture that comes from the Comb Filter is perfect for adding some ambience back in to dark, electronic tracks. Once the Comb Filter is added, drop the ENV knob down to 0, which will keep the Filter Envelope from modulating our newly added filter.

I'll also lower the Frequency Cutoff of the Comb Filter to 175 Hz, and raise the Resonance to 77, with the Comb polarity to Comb -. These settings, once modulated, are going to give us an extremely interesting audio texture.

Oh, and now would be a good time to add another Comb Filter in our second Filter slot, which we'll route the signal of the first filter into the second filter, using the small arrow buttons. Also, make sure you enable the Filter to Amplifier button, or you won't hear anything!

Back at Filter 2, let's create some mildly similar settings in an opposite fashion. I'll set the Filter Cutoff to 175 Hz as well, and the Resonance to 73. However, the Comb Filter Mode will be set to Comb +. And, for this filter, let's leave the ENV knob where it is. We'll allow it to be modulated, a little…

Okay, now for some light modulation. I'll use the Modulation Matrix to Route LFO 1 to the Filter 1 Freq, and make the same setting for Filter 2. However, we'll set up opposite directions of movement for the Filter knobs. The Amount for Filter 1 (40) will go Positive, and the Amount for Filer 2 will go negative (-69). The end result gives us an almost authentic '80s era flange without the Alesis MIDIverb III. Well, once we actually set the LFO 1, up! 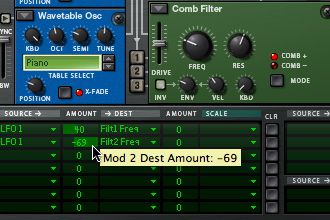 On LFO 1, I'll enable the Tempo Sync, so that the Rate follows Reason's sequencer. Then, I'll modify the Rate of LFO 1 so that it is now moving at a 4/4 tempo. Next, by setting the Waveform to a Square wave, I can get a bit of a groove going on within the Modulation of my Comb Filters.

Okay, let's make it sensitive! I'll enable the Delay on Thor, and set it to Tempo Sync. Now, the Delay Time matches with Reason's sequencer, like the LFO, ensuring our timing will be right for any song we drop this stab into. Speaking of Time, let's set it to 3/16. We'll also adjust the Rate of Modulation for the Delay to 0.68, and set the AMT of the Delay Modulation to 60. This will add to the washed out effect going on already in the Comb Filters, adding to that Flange feel. Finally, let's give the Feedback a generous bump up to 50.

Alright, we've got everything set, let's hear it...

Wow, it's almost like it's 94, at the Rave, in Waikiki, again. Makes you miss all those herbal drinks and glow sticks! So, there you go, a quick easy, House/Techno stab, with very little effort. Some suggestions for additions would be a High Pass filter, tied to the Mod Wheel to really allow you to fade in and out with those crazy stabs, as they cascade along with that kick drum.