Language
Image-Line's Sawer synth is a thick, analog-style synth with some serious attitude. In this tutorial, GW Childs shows how to create a Robin Schulz style ducking pad using it in FL Studio.

If you haven't checked out Sawer, from Image-Line, you really need to give it a spin. It's a simple, thick, get right down to it and tear it up, analog sound-alike, that really has attitude. Even if you aren't an FL Studio user, I think you're really going to be excited about this one. It's VST, DX, and even AU. But, my real reason to write this quick tip is to tell you a really quick and easy way to build a pad that already has the nice, side-chain style ducking pad, very similar to the pad used in Robin Schulz, Lilly Wood & The Prick's, "Prayer in C".

Start Small and Build Up!

After loading up a Sawer in FL Studio, I'll go in to Options, within the Sawer interface and select Reset Program.

With the default patch, I'll go ahead and program a similar chord progression to Mr Schulz, and Co. in an empty pattern. Later, I can go in and add some drums, and bass, flamenco guitar, etc. But, for now, I just want to be out there, floating in the heavens with some blissful, epic pad action.

Now, let's give it a little fluff! Of course, I'll go ahead and raise the Unison Voices to 2, so that we have 2 additional voices being triggered now, instead of 1. And, by adding the additional voice, we can bring the Unison Detune and Pan all the way up to 40%, and hear some nice, phat, detuned thickness, already! I'll also press the Octave button button, so that one of the voices supplied via unison will be raised an octave. This will make our pad seem much more orchestral and dimensional!

Next, we'll edge on over to the filter section to tone this thing down a little. Otherwise, how will Lilly's voice chime through, if she's fighting over those high frequencies?! I'll set the filter mode to Band Pass (BP) and then lower the Filter Cutoff to 56%.

Okay, it's time to get the pad pumping! In the LFO section, we'll enable the Retrig. By enabling this function on the LFO, the LFO itself will reset, or retrigger from the start of its pattern with each key press. This will greatly assist in keeping the LFO in sync! We'll also enable TMP Sync, so that the LFO tempo follows the Host Clock. I'll also set the LFO Waveform Shape to Saw Tooth. This will give us the proper pattern for the ducking, or side-chain, pumping effect.

I'll adjust the Speed of the LFO to 1/4, which is the speed of your pumping pad effect.  And, I'll adjust the Amplitude to 70%, which is the intensity of how hard the pad will pump. Once you have set the Destination to Cutoff (meaning 'filter cutoff'), play a chord to hear the pumping effect! 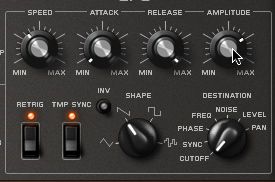 Finally, head down to the effects section of Sawer, and enable the Chorus, and raise its rate to 52%. With some thick chorus going on, the pad sounds much thicker!

Sawer is an incredibly thick synth that easily allows you to gain thickness that other synths struggle to fulfill. And, with the really cool, simple LFO, and some careful settings, you can make some patches that will make all your EDM dreams come true!